Centre of the Northeast
Travel

Centre of the Northeast

Known as the educational hub of Isan, Khon Kaen is cashing in on its vibrancy

published : 8 Jun 2017 at 04:00
newspaper section: Life
writer: Karnjana Karnjanatawe
A Ban Sila resident in traditional dress picks tuberose, which is known as dok khao in the Northeast, from Suan Mae Khampai. Visitors can pick the flowers for 2 baht a stem. Karnjana Karnjanatawe

Children laughed and shouted out from the other side of the Phong River. The schoolboys dared each other to climb higher branches of a nearby tree to jump into the river when they saw us taking pictures of them.

The river is the main waterway of Khon Kaen and we were waiting for our cruise boat at Ban Sila Homestay. The orange boat is made of fibreglass, is roofless and each side has the words "rescue boat" written across.

Sangkom Panikom, 48, head of Ban Sila Homestay, explained that the boat was used to transport people and goods during the floods of 2011. When the community launched the homestay service early this year, they decided to make the most use of what they had, which included the two boats, to entertain visitors.

Ban Sila Homestay is in Muang district and 11km northeast of the inner city. Most of the locals lead a simple life working on farmland. They grow organic rice, vegetables, flowers and herbal plants. They have a learning centre to educate visitors on how to grow rice and how to process it into snacks. There is also a small plant that produces food and juice from herbs and fruits.

The idea of opening the village to tourism was initiated by the Ban Sila Municipality mayor four years ago.

"When I heard the word homestay, I thought it was a candy," recalled Sangkom, adding that villagers were told that their community had potential because the people were united. They also had a number of occupational groups, which could be promoted as activities for tourists.

Those who were interested in the homestay concept visited successful homestays in other provinces, including Ban Na Or in Loei and Ban Si Kai in Nong Khai. The site visits inspired them to follow suit.

With the support of the municipality and Khon Kaen University, Ban Sila founded its homestay committee last July. Residents were trained in cooking for group visitors, improving their home facilities and cleanliness, while students were trained to become guides.

The community has 14 homestays, out of the 20 homes. Activities include visiting flower plantations and rice paddies, making flower garlands and hanging ornaments and even learning how to be a farmer.

A visit to Wat Pho Si is a must. The temple houses a 91-year old ordination hall known as sim in the Northeast. The highlight is the outstanding carvings on its wooden door, gabled apex (chor fa) and the pillar in the centre of the roof.

Another distinctive temple in Khon Kaen's Muang district can be found at Wat Chai Si, about 30km west of Wat Pho Si. Believed to be built more than a century ago, the ordination hall of Wat Chai Si is decorated with murals.

The murals, which are called hub taem in the local dialect, tell the story of Sang Sinxay, one of the masterpieces of Lao literature written by Pang Kham in 1649, during the Ayutthaya period.

According to Asst Prof Songwit Pimpakun of Khon Kaen University, the epic is well known not only in Laos, but also in the Northeast of Thailand like the epic tales of the Ramayana and Khun Chang Khun Phaen in Thailand.

The story of Sang Sinxay has also been used by molam singers in the Northeast, he added.

He was inspired by the street art of Ernest Zacharevic, the Lithuanian-born artist, who revived George Town in Penang, Malaysia, with his lively portraits throughout the area. Wachira applied Zacharevic's concept by using locals as models.

"I want the street art to be a thing people of Khon Kaen will be proud of," he said.

The project was completed this year by local artists. It features seven murals on building walls on Ruenrom-Chaloem Phrakiat Road. The pictures are lively and some paintings are 3D, which people can interact with.

Wachira expects to organise a monthly walking street to promote the arts & crafts, local products and organic food, which are served at his café.

"The city of Khon Kaen does not have many natural attractions, but it is vibrant with abundant activities and food," said Tourism Authority of Thailand executive director for the northeastern region Somradee Chitchong.

TAT plans to promote Khon Kaen as a major tourist destination and expects to increase tourist number from 3.4 million to 5 million by next year.

To achieve the goal, TAT works with public and private sectors to introduce new attractions and organise a series of events such as "Mor Lam Carnival", which was held last month, and the "International Yoga" event on July 30.

Khon Kaen aims at being the centre not only for education in the Northeast, but also for Meetings, Incentives, Conferences and Exhibitions, health & wellness and tourism, Somradee said, adding when Khon Kaen airport expands in 2020, the province will be able to welcome more visitors. 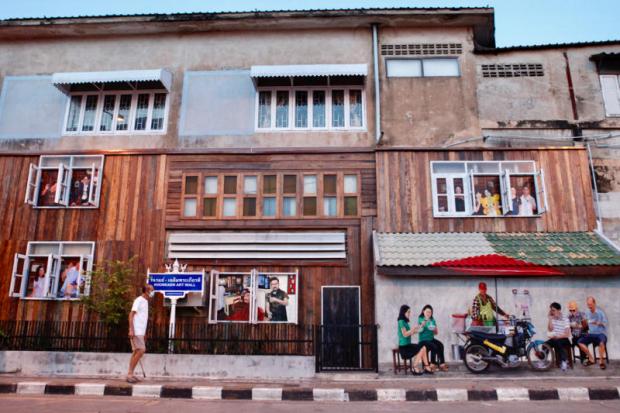 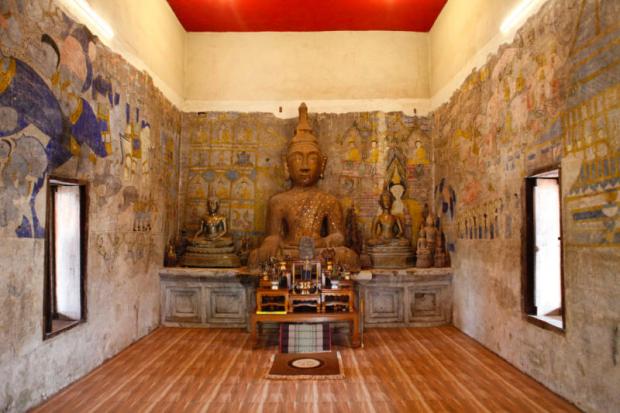 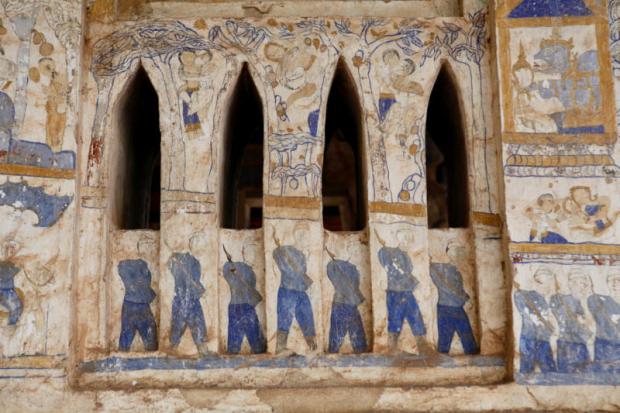 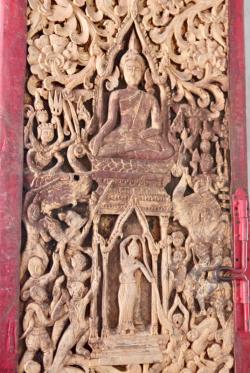 The carved wooden door of the old ordination hall of Wat Pho Si in Ban Sila looks much like a painting from afar. It tells the story of Buddha. The hall also houses a bell built in 1920, wooden Buddha images and old palm leaf manuscripts carrying Buddhist scriptures. Karnjana Karnjanatawe 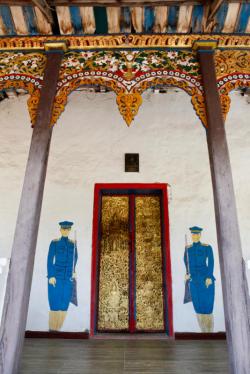 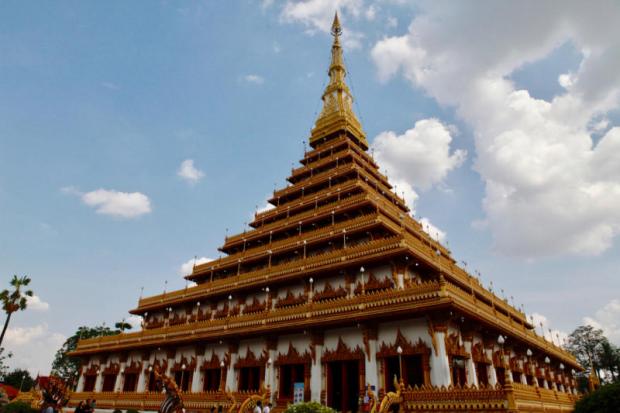 Phra Mahathat Kaen Nakhon was built to celebrate the 200th anniversary of the province and to commemorate the golden jubilee of the late King Bhumibol Adulyadej in 1996. The nine-tiered golden roof building is in Wat Nong Waeng in Muang district. It is 50m wide and 80m high, and houses Buddha relics. Karnjana Karnjanatawe 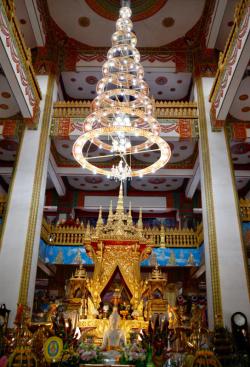 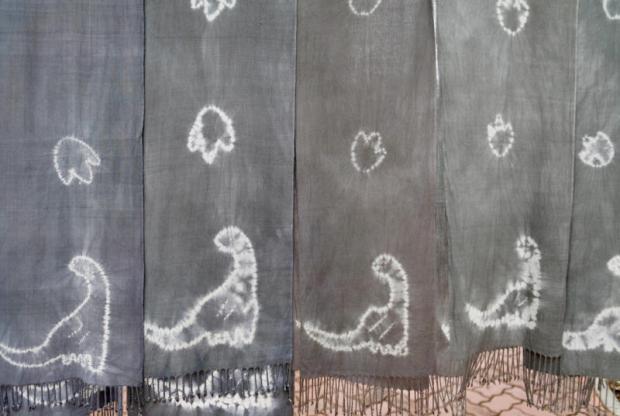 The tie-dyed scarves are made by the Handicraft Group of Phu Wiang. Group members, mostly housewives, wanted their products to be unique, so after trial and error for two years they finally settled on a dinosaur design. A paper pattern is used to trace an outline. Yarn is then stitched on top and bottom of the outline. The yarn is then tied firmly to the cloth before it is dyed. Once the yarn is untied, it shows the dinosaur design. Tie-dye workshops are organised at the Phu Wiang Dinosaur Museum. Karnjana Karnjanatawe 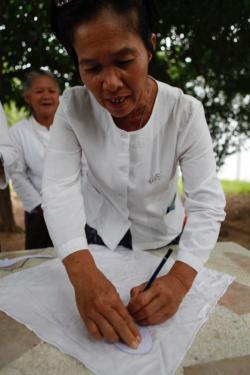 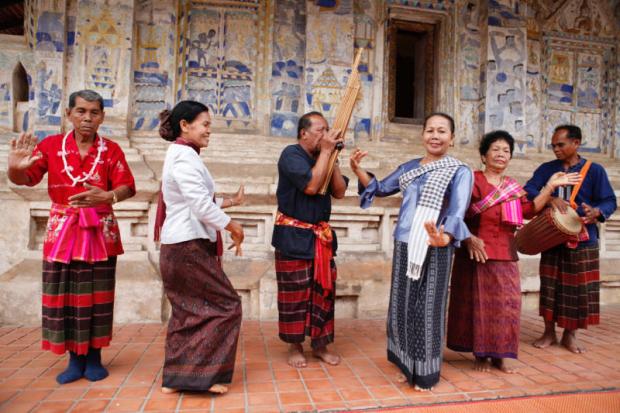 Mo Lam Phan Pi is a traditional folk band. They perform molam, which is believed to have originated in Khon Kaen. The must-have instrument is the kaen (mouth organ made of bamboo) and is played by Boonmak Saengsirueang. He is accompanied on drums by Virat Sonsakda. Boonmak said it was hard to find new molam singers as the popularity of the songs has declined. Traditional Isan folk songs are now gradually mixed with luk thung music played with modern musical instruments. The new molam has faster beats and is known as molam sing. Karnjana Karnjanatawe 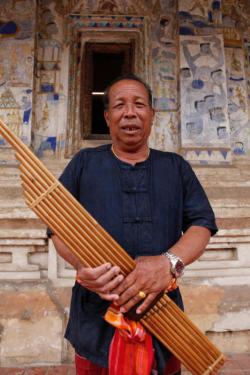 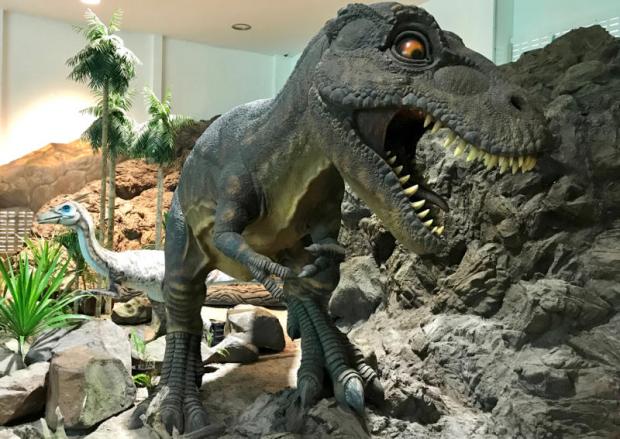 A visit to the Phu Wiang Dinosaur Museum of the Department of Mineral Resources is a must in Khon Kaen. The museum, locayed in Wiang Kao district 84km northwest of the city, houses fossils of five dinosaurs found in Phu Wiang, including Siamotyrannus isanensis, the first dinosaur fossil of Thailand, Phuwiangosaurus sirindhornae and Siamosaurus suteethorni. There are also replicas of dinosaur skeletons and sculptures. In February, Khon Kaen governor Phongsak Prichawit announced the dinosaur as the provincial mascot. Large dinosaur sculptures at traffic roundabouts as well as products like dinosaur drinking water bottles are found throughout the town. Karnjana Karnjanatawe 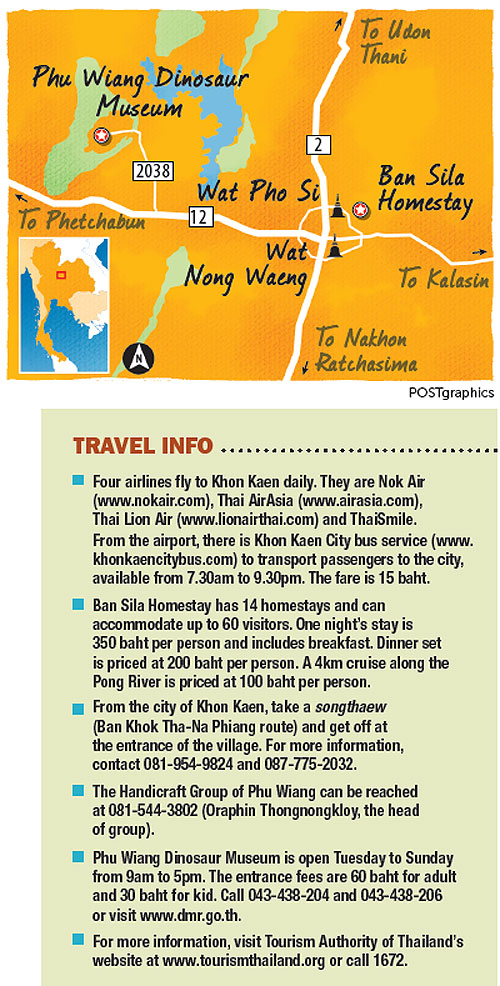