Not what it seems
Travel

Not what it seems

As you can see on the map, Klong Yai district is a narrow strip of land that extends from the main part of Trat province. Flanked by the Gulf of Thailand on one side and the mountains of western Cambodia on the other, it doesn't look like a place where much has happened.

The border town of Klong Yai is home to Thai nationals of different ethnic origins: Thai, Chinese, Vietnamese and Cambodian. The people and their different cultures coexist and collaborate in harmony. The Chinese Shrine of Chao Mae Thab Thim is respected by the town's residents of all descents. It is also a major venue for community activities, which reflect the locals' diverse heritages in various forms, from faith and architecture to music and dances, costumes and food. Klong Yai is one of a number of communities in the East that receives support from the Designated Areas for Sustainable Tourism Administration and the Thai Ecotourism and Adventure Travel Association.

But things aren't always what they seem.

Nowadays, not many people are aware that Klong Yai was once part of a Thai province called Patchan Khiri Khet, whose name was meant to rhyme with Prachuap Khiri Khan, located on the other side of the Gulf but on the same latitude.

The majority of Patchan Khiri Khet along with Trat was ceded to France, which took control of Indochina in 1904 in return for the French pulling their troops out of Chanthaburi. Almost two years later, France agreed to return Trat and Klong Yai, which was the northern tip of Patchan Khiri Khet, to Siam (now Thailand) in exchange for Siem Riap and Battambong, which had been under Thai rule since 1795. The rest of Patchan Khiri Khet is now the Koh Kong Province of Cambodia. A lot of people in Klong Yai and Koh Kong still have relatives on the other side of the border.

In more recent times -- from 1979-86, to be exact -- Klong Yai played host to almost 100,000 displaced Cambodians. The former refugee camp now houses a museum where visitors can learn about the hardship of the war victims and the helping hands they found from not just the Thai people but also the Thai queen. Her Majesty Queen Sirikit was there to help "fellow human beings". She even prepared milk for the children herself.

I was told by the manager of the museum, who has been working at the refugee camp since day one, that despite the risk of the camp being attacked from the other side of the border, Her Majesty refused to leave until the Red Cross flag was hoisted over the site.

Yes, there was so much more that took place on this strip of land. Each place and each community has its story to tell. And the best way to learn about them is to go see it all with your own eyes. Be warned, though, that one trip may not be enough. 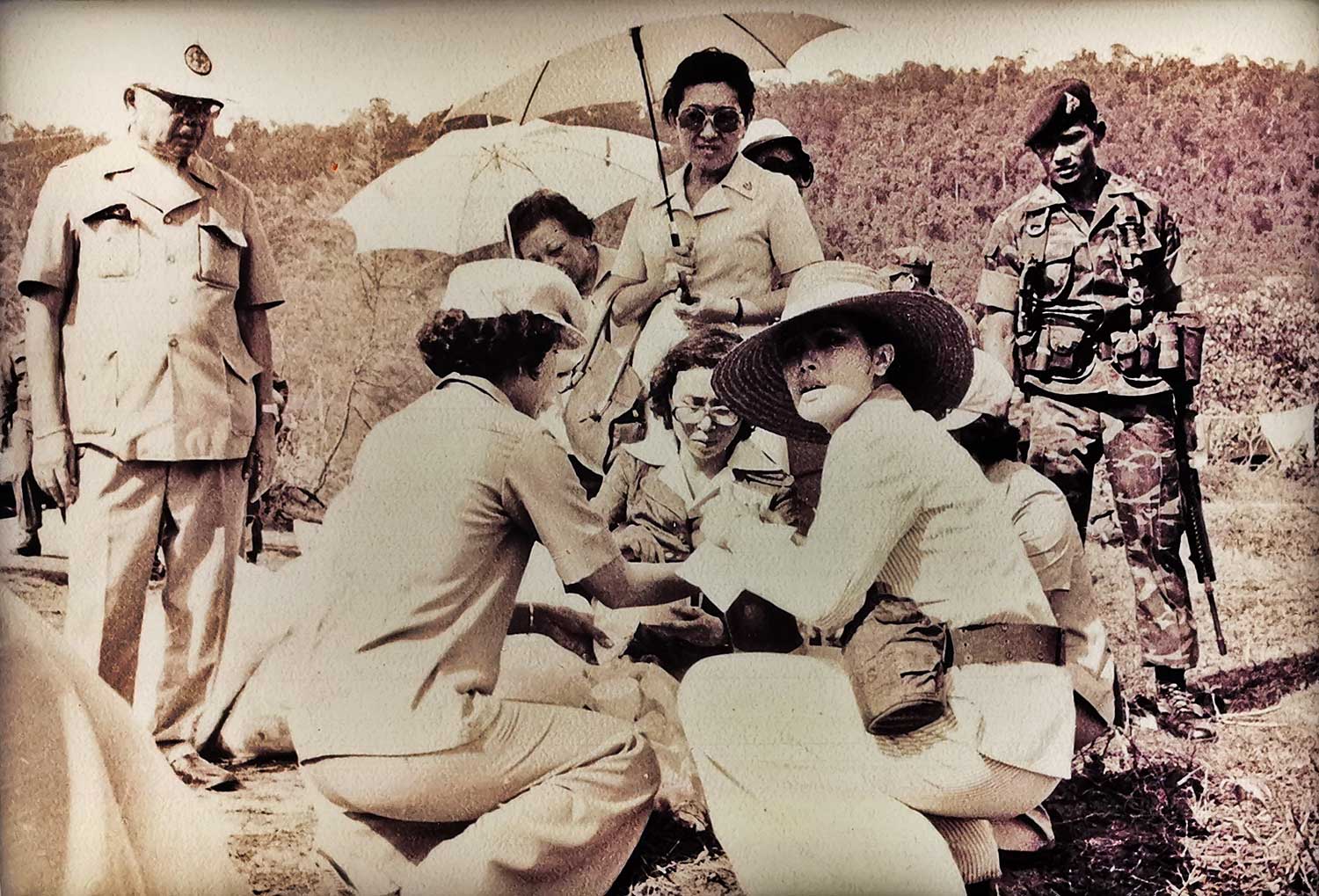 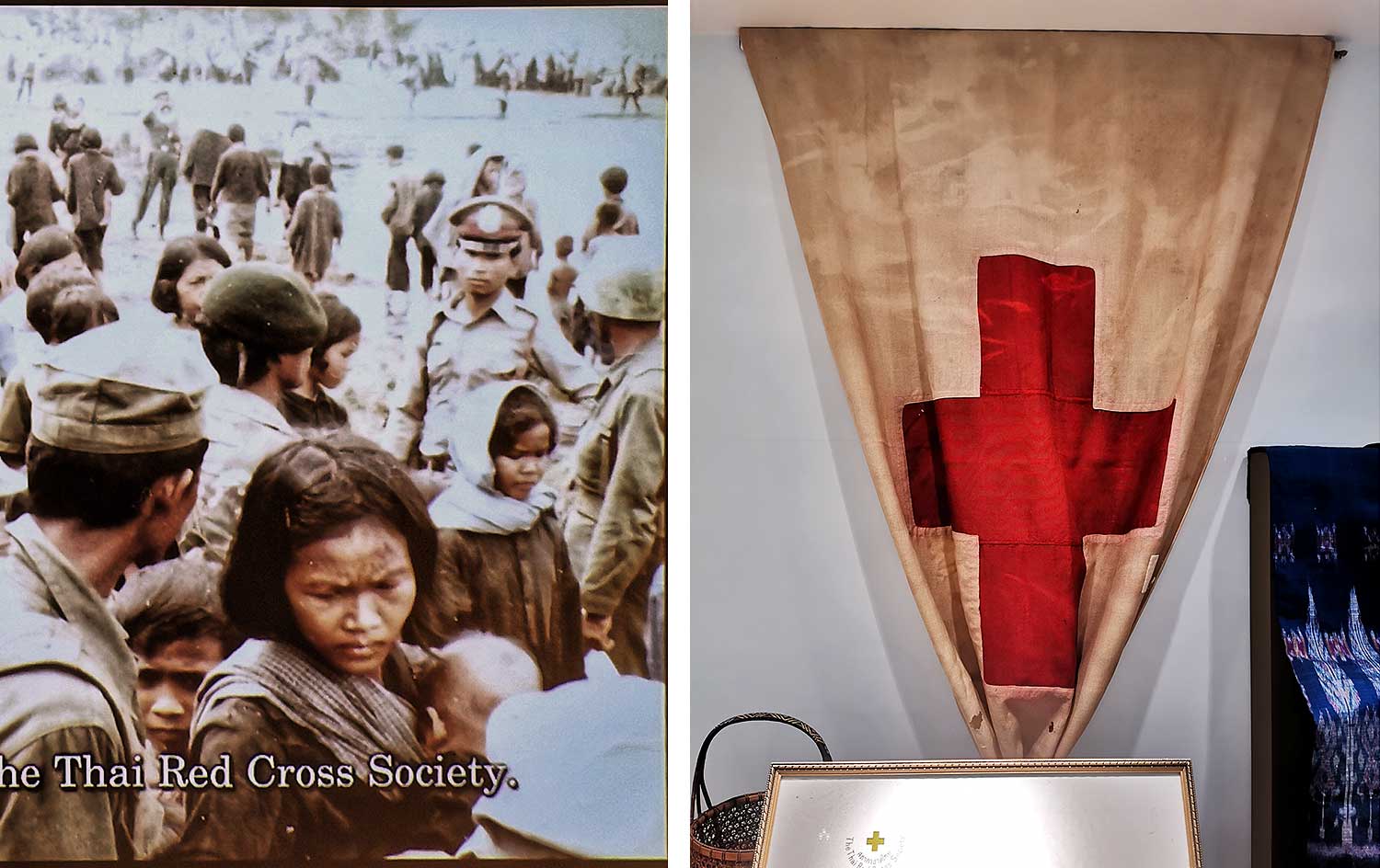 When Kampuchea (now Cambodia) was invaded by Vietnam in late 1978, waves of Cambodians fled the war and the ensuing famine (the irrigation system was heavily destroyed) into Thailand. On May 20 of the following year, over 90,000 refugees made their way through the dense forest and crossed the Banthat mountain range which forms the natural borderline to Ban Khao Lan of Trat's Klong Yai district. On May 26, Her Majesty Queen Sirikit, as the president of the Thai Red Cross Society, visited the area. Seeing the poor condition of the Cambodians, she ordered the establishment of a Thai Red Cross Society Centre at Ban Khao Lan to provide the displaced people with proper accommodation, food, healthcare, vocational training, a place of worship as well as education and recreation for their children. Until July 1986, the centre served as home for the refugees before they were sent to a third country. Six years after its closure, a museum was built in the former refugee camp, now known as Ratchaka 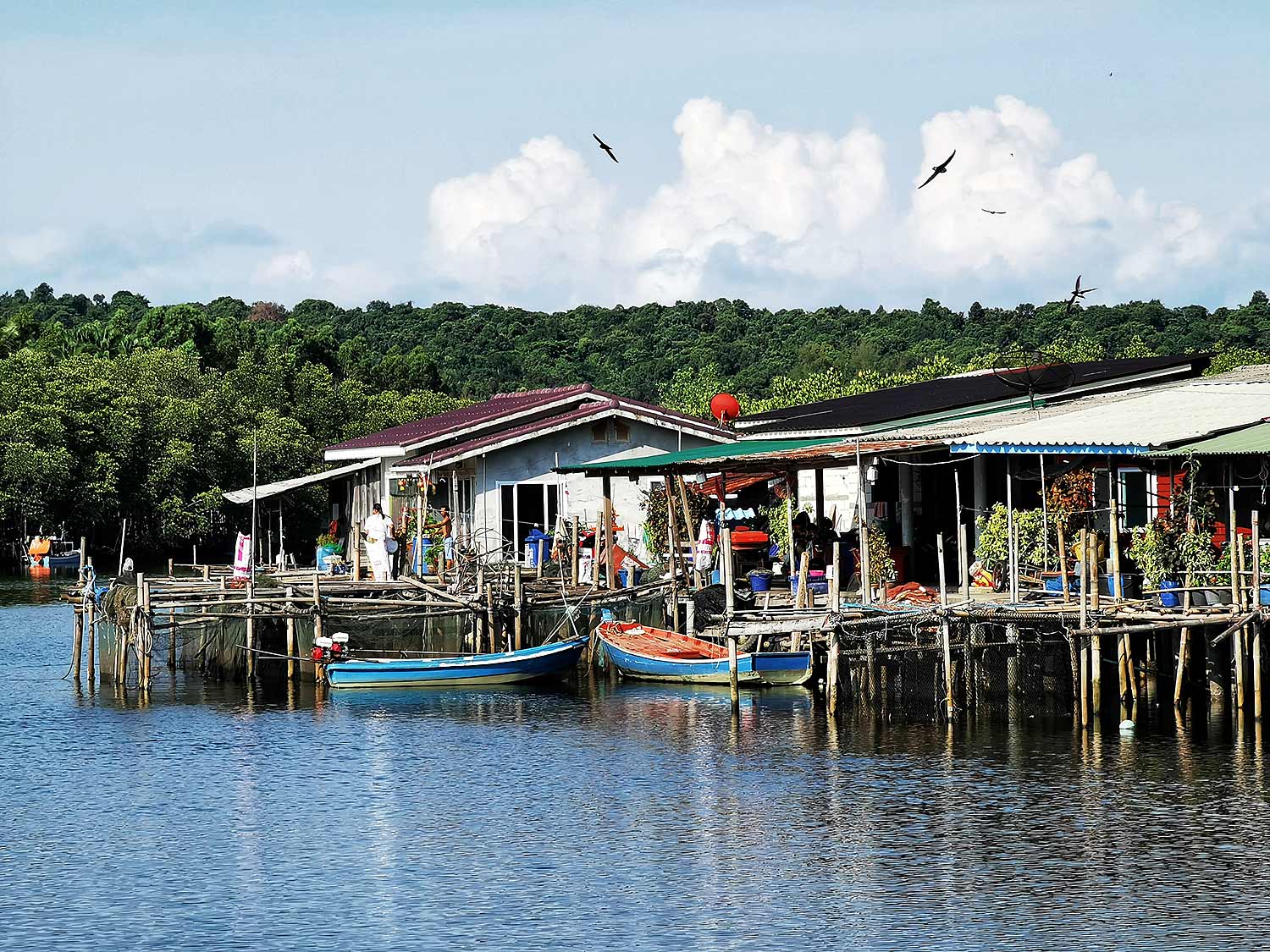 Located in the northernmost and thickest part of the strip of land that is Klong Yai district, the fishing community of Ban Mai Root covers both sides of the mouth of its namesake river. Here, visitors can learn about the local fishermen's way of life and how their conservation efforts have helped make their livelihood sustainable. One of their successful projects is the "crab bank", a common nursery for the village's fishermen to leave any eggbearing blue swimmer crab (pu ma in Thai) found in their catch. Depending on its size, a berried pu ma can carry up to 2 million eggs. The crab bank gives the crustaceans a chance to spawn before being sold in the market. The eggs are then allowed to hatch and the larvae returned to the natural environment, ensuring that there will be new generations of crabs. Tourism is a new source of income for the villagers. Some families provide homestay and night-time boat tour along Mai Root River. The upstream area is home to at least two species of fireflies. Different species flash their light in different tempi.

Seafood is always a highlight of my visits to the coastal areas of Trat province. In Ban Mai Root, I enjoyed the freshest and largest mantis shrimps I had ever had. The photograph of the serrated mud crab (pu thalay) vendor was taken in Ban Tha Ranae. These crabs were fresh and full of juicy meat. Years ago during a visit to the border market in Ban Hat Lek at the southern tip of Klong Yai, I bought some pu thalay from a Cambodian vendor. They were even larger than the ones in the picture. However, later in the evening when I had them cooked at the resort I stayed in, I was surprised and disappointed to find that the crabs had very little flesh. The experience taught me that the meat of dead serrated mud crabs disintegrates very quickly. That's why only live ones are sold in the market or at restaurants. 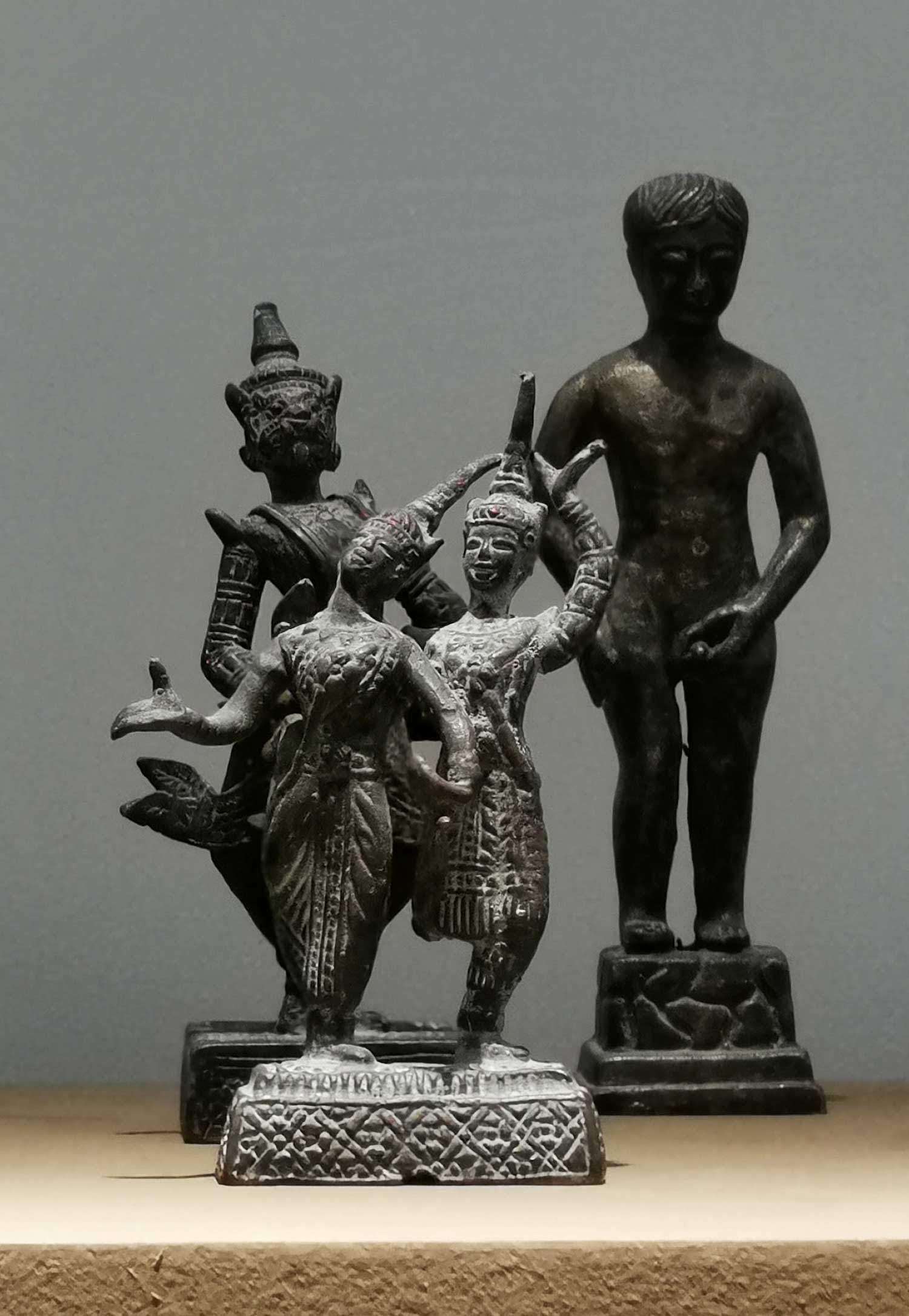 On display in a section of the Sala Ratchakarun Museum are objects left behind by the refugees. These beautiful sculptures depict several kinds of Cambodian art, from garments to dances and religious beliefs. It's a pity much of such national heritages and masters of the related art perished during the decades of the country's complicated political and military conflicts. These days, several traditional art forms have been revived. Still, there is a long way to go for today's artists to catch up with the works from their predecessors. 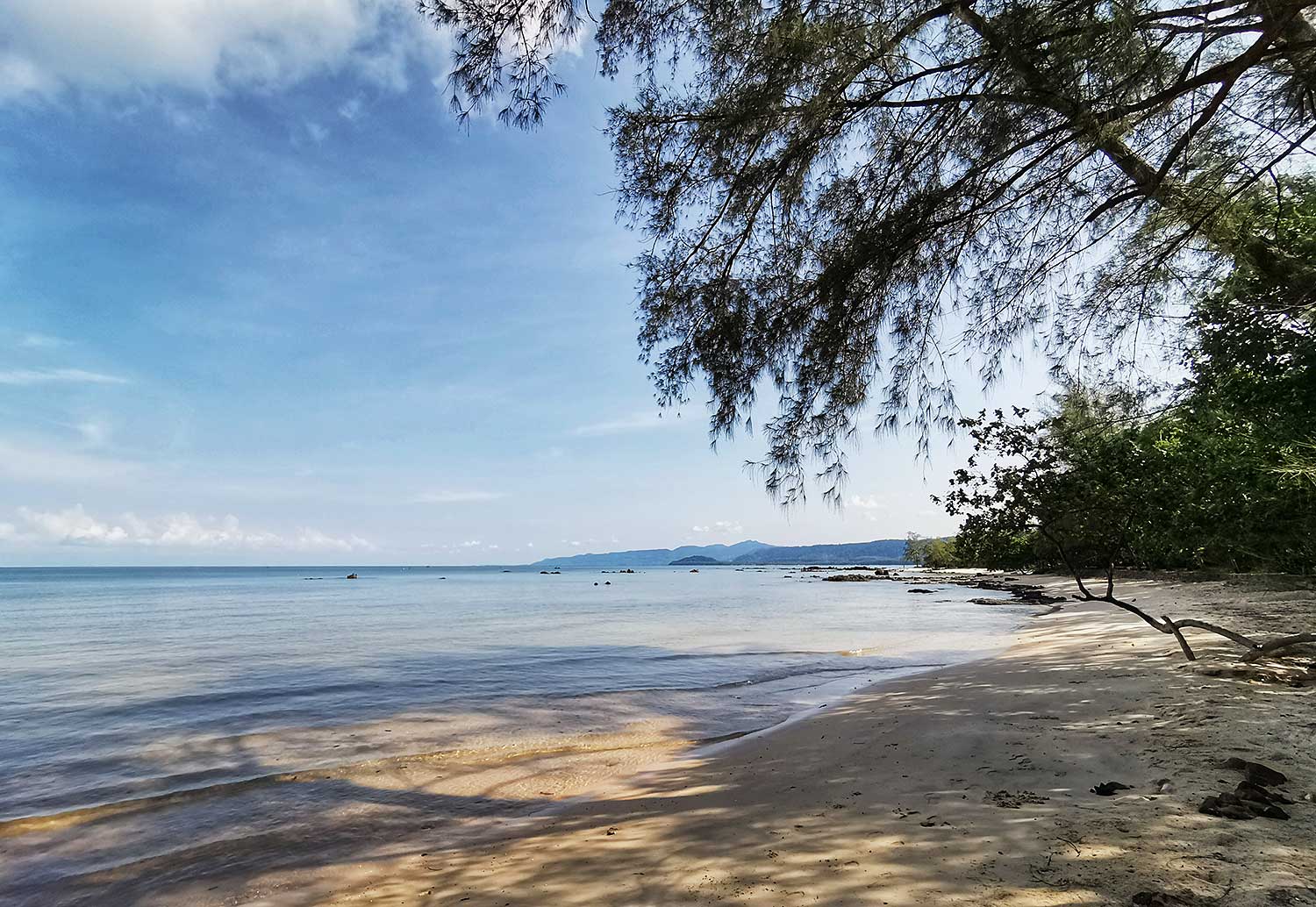 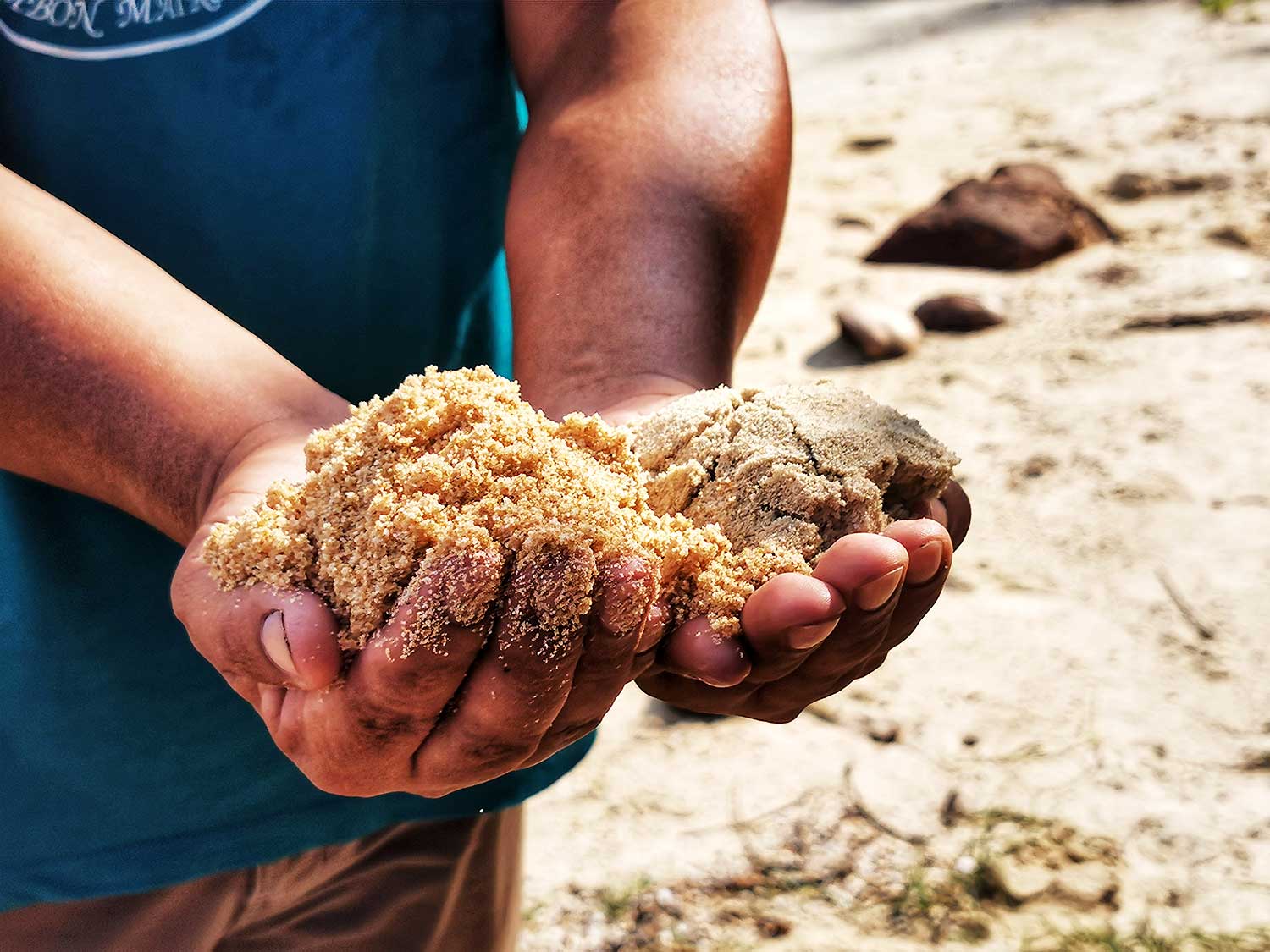 Trat boasts several beaches, not just on famous islands like Koh Chang or Koh Koot but also on the mainland, especially in Klong Yai. Among the sandy strips in the district are Hat Ban Chuen, Hat Ratchakarun and Hat Mai Root. A stone's throw from the last is Hat Sai Song Si (two-colour-sand beach). The picture, which shows sand scooped from the left and right sides of the beach, explains why the site is so named. 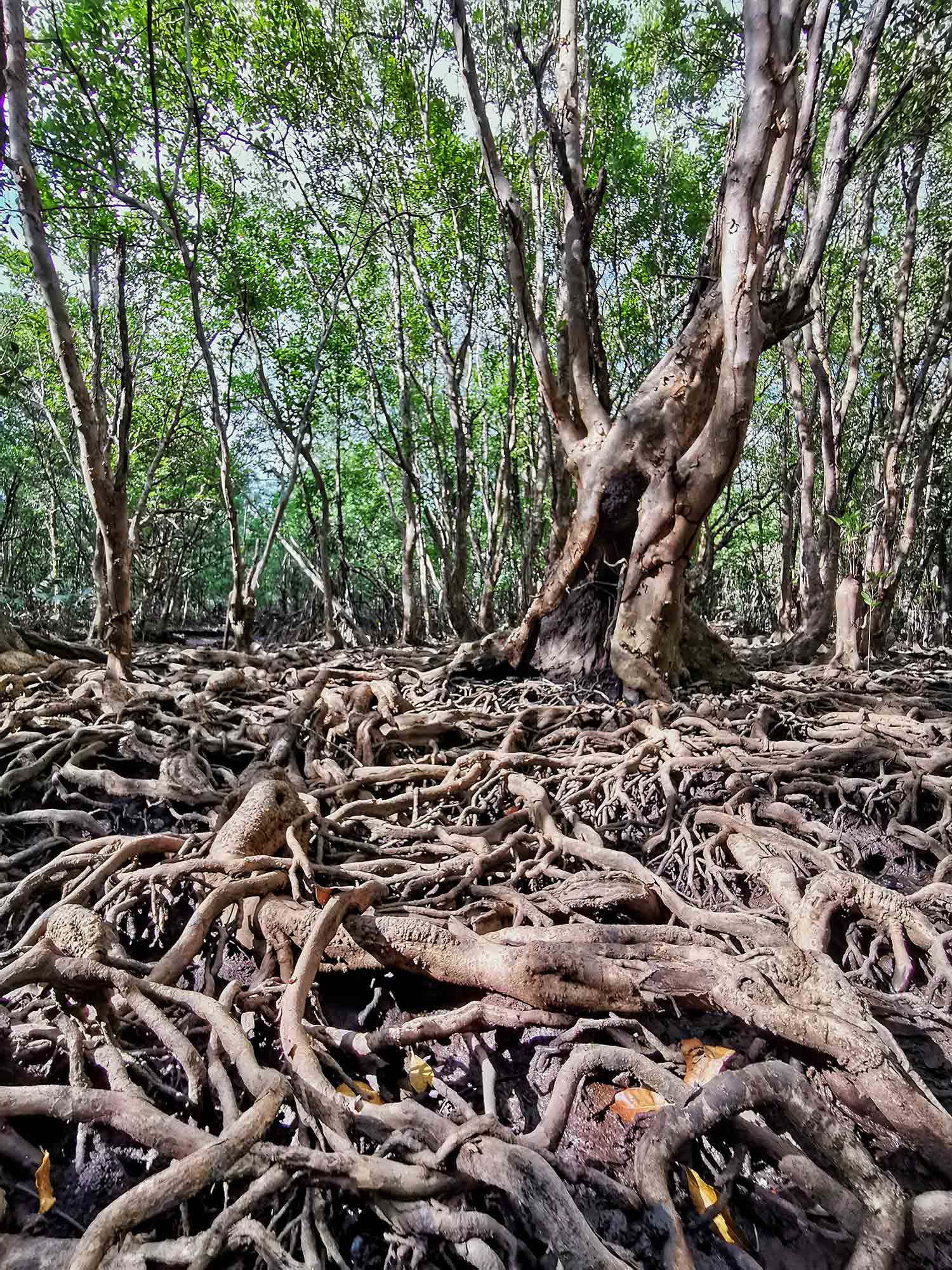 Ban Tha Ranae may not be in Klong Yai district but if you have made it all the way to Trat province, you should not miss it. Located near the estuary of Trat River, the village sits right next to a mangrove forest in which there is a site called Lan Tabun which makes it unique. Dominated by the cannonball mangrove trees, the ground surface of the area, which can be reached by boat, is covered by an amazingly intricate network of roots which is so dense that no other trees could grow. It had been four years since my first visit to Lan Tabun. During the recent trip there I found cracked and broken roots at many spots. Obviously, the damage was caused by trampling tourists. It is important that the villagers make sure their visitors stay on a designated path.