The temple of our concrete jungle
Travel

The temple of our concrete jungle

published : 3 Dec 2020 at 04:00
newspaper section: Life
writer: Pongpet Mekloy
Located 5km east of the Grand Palace if measured in a straight line, and about 3.5km outside the outer city moat (Klong Phadung Krungkasem), Wat Pathum Wanaram was well away from the urban area when King Mongkut established it in 1857. These days, the city has expanded and the temple is now surrounded by a modern concrete jungle.

Each day countless numbers of Bangkokians commute past Wat Pathum Wanaram, the royal temple sandwiched between Siam Paragon and CentralWorld. Every day, they see it from the windows of their cars, buses or Skytrains. Few, however, actually step into the temple to learn more about it. 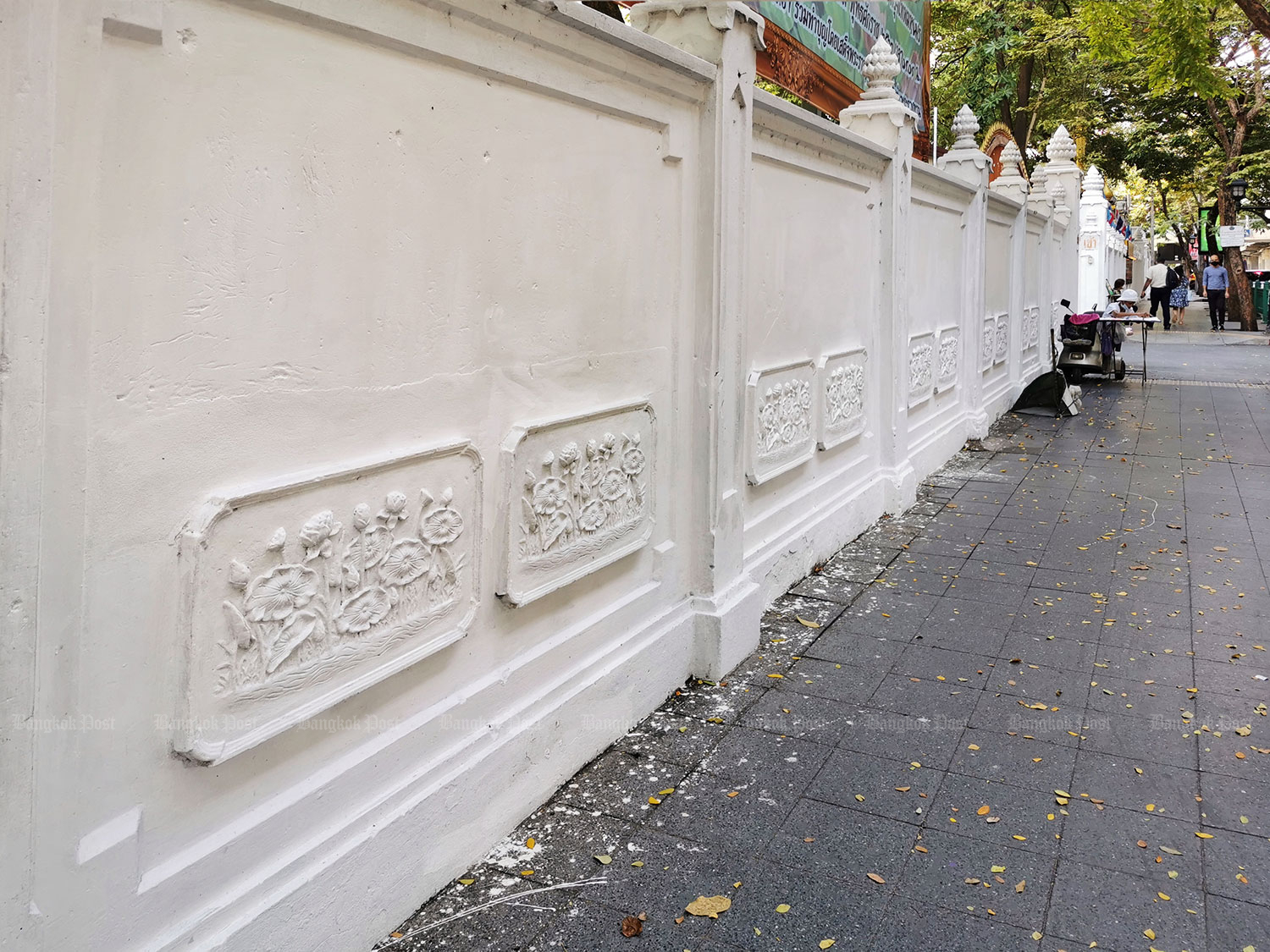 With the headquarters of the Royal Thai Police — a target for several mass protests over the years — as its neighbour, there were times Wat Pathum was affected by political conflict. The latest incident took place on Nov 19 when the temple’s wall on Rama I Road was covered with graffiti and harsh words against the establishment. On the very next day, volunteers from all walks of life united to clean and restore the wall to its white colour. 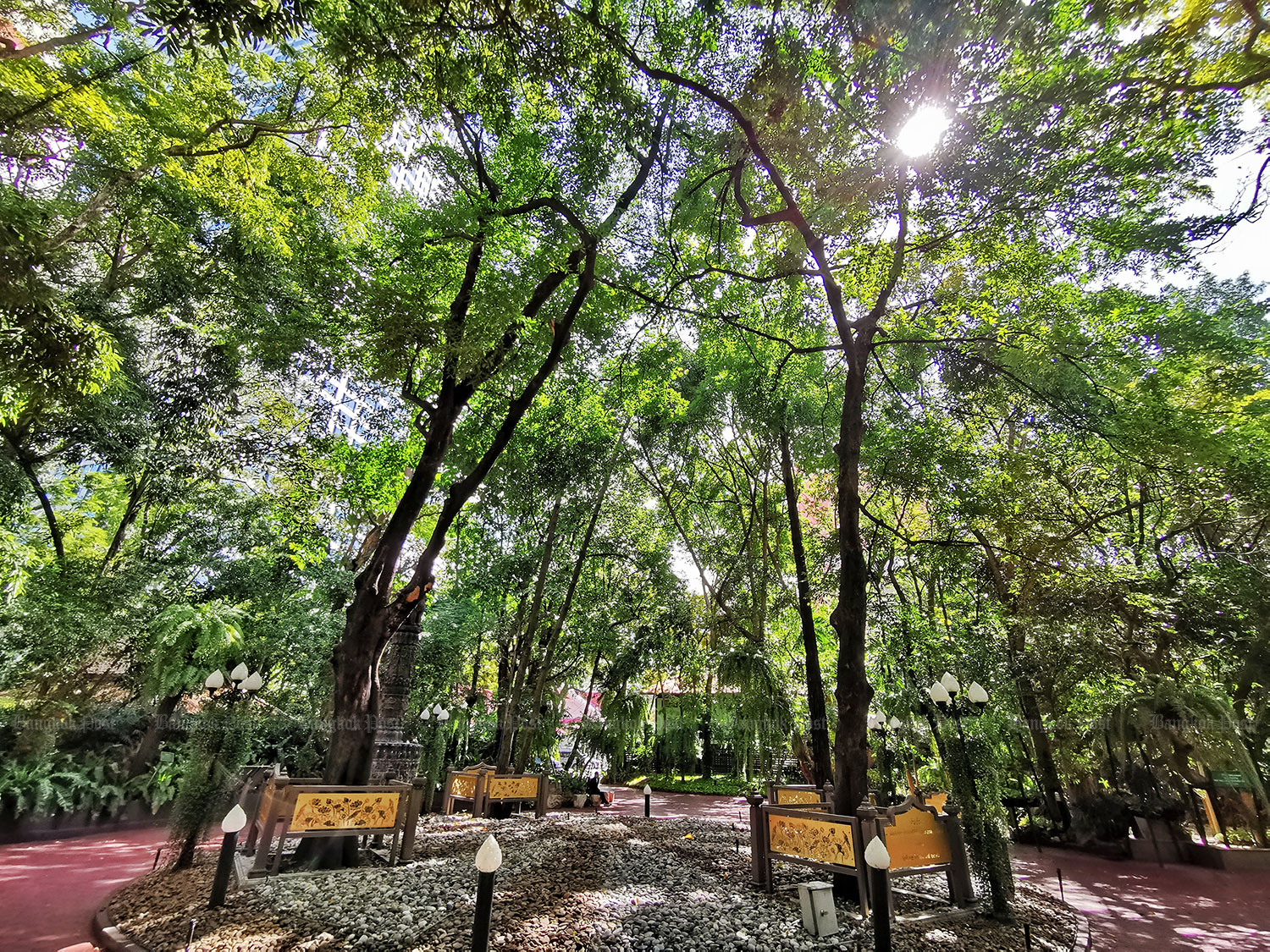 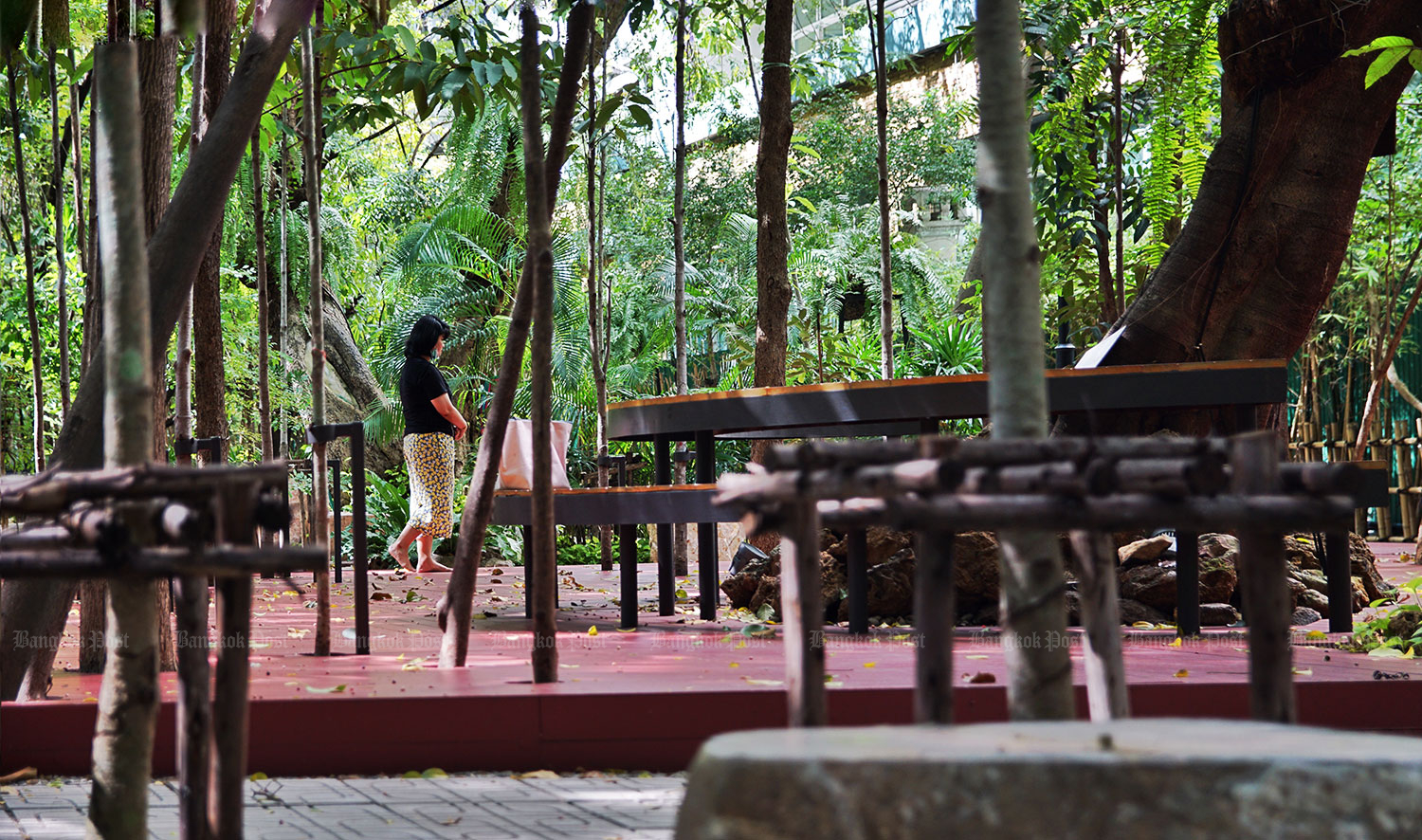 In the relatively compact compound of Wat Pathum, if you venture deeper past the phutthawat area which is made up of the beautiful ubosot and other religious structures, you’ll be greeted by a world of total serenity where individuals come to meditate in different corners. For most first-time visitors, the existence of such a green sanctuary in this bustling part of Bangkok is simply beyond expectations. When in the area, understandably, talking is prohibited.

Commonly called Wat Pathum in short, the temple was built by King Mongkut (Rama IV). Back then, the area was far from the city centre. It mainly consisted of ponds and farmland belonging to Lao people who were relocated from Vientiane during the third reign. The temple houses three centuries-old Buddha statues from Laos -- Phra Soem, Phra Saen and Phra Sai. The first is believed by worshippers to have the power to make their wishes come true. The other two were said to be able to attract rain and quell drought. However, the magic of these Buddha statues was most evident in the boosted morale of the displaced folks.

Wat Pathum's name derives from the fact that the area where the temple is located used to have a lot of lotuses -- pathum means lotus. These days the aquatic plants are nowhere to be seen since the ponds have been filled up. But the flowers can still be found in abundance in mural paintings and various architectural elements within the temple's ubosot (ordination hall) and vihan (prayer hall).

With a mini forest in its inner part that appears as a rare oasis of peace, Wat Pathum is a great place to practise meditation. But unless you already have some training, it's wise to begin with mass prayers -- an easy way to meditate. Every year on the night of Dec 31, the temple holds such a session for people wishing to welcome the new year in a solemn fashion.

Next time you pass Wat Pathum, don't forget to drop by to check out its true beauty with your own eyes. 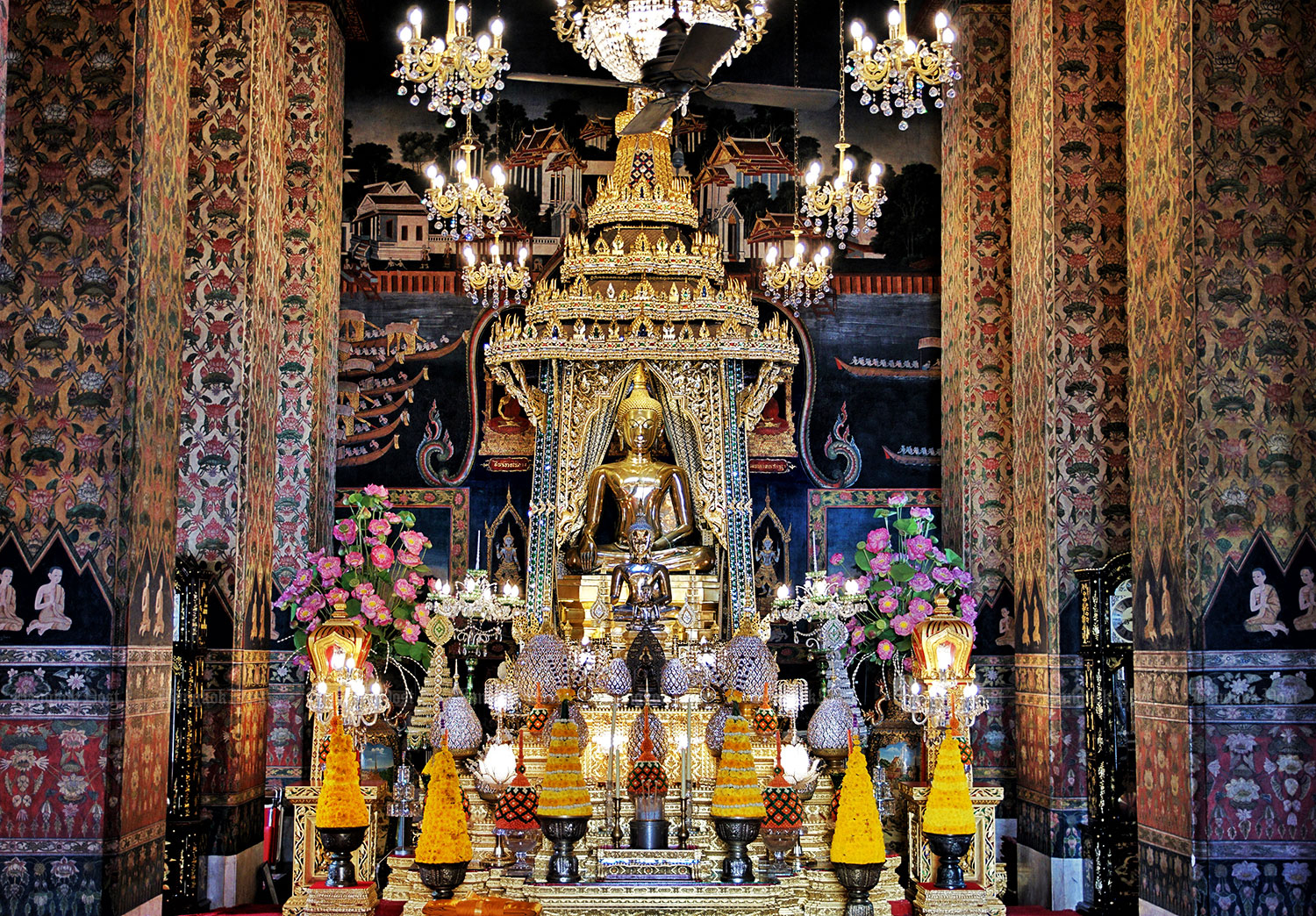 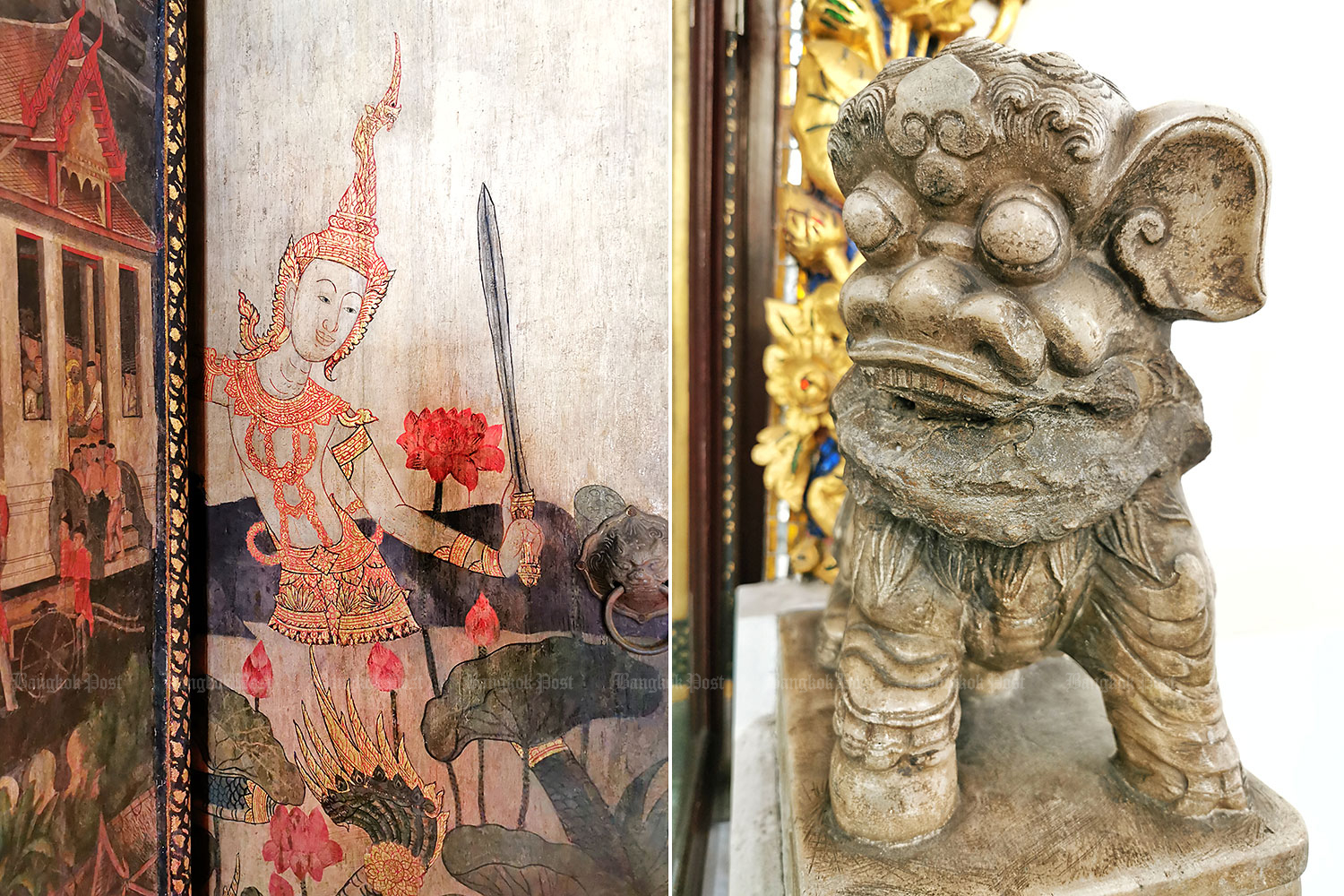 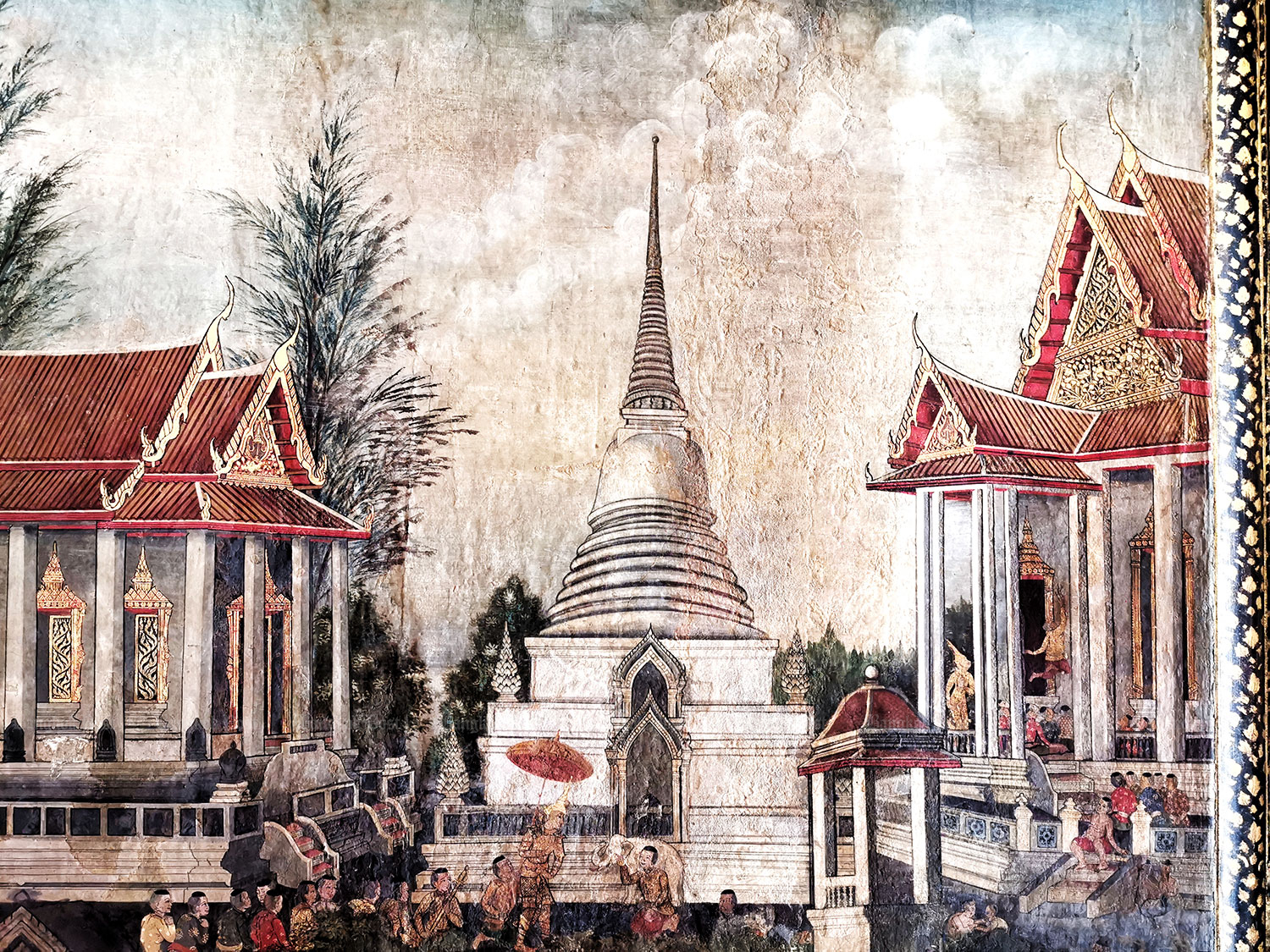 The vihan (prayer hall) is Wat Pathum’s largest religious structure. It is situated west of the white pagoda which stands between it and the ubosot (ordination hall) built in a similar style but slightly smaller. Apart from housing highly revered Buddha statues such as Phra Soem, which is the vihan’s principal image, and the smaller Phra Saen, the interior of the prayer hall boasts murals from which one can learn about the Bangkok that existed over 160 years ago. Some depict gatherings of people from various ethnic groups. Some even show in detail how people dressed in those days. There is also a picture that portrays the temple’s main architecture. Something else at the vihan I found interesting was the Chinese-style lion sculpture guarding the hall’s entrance. At least to me, the marble statue, which is the size of a small dog, was endearing. Normally, such sculptures come in pairs. It’s a pity, in this case only one was found. 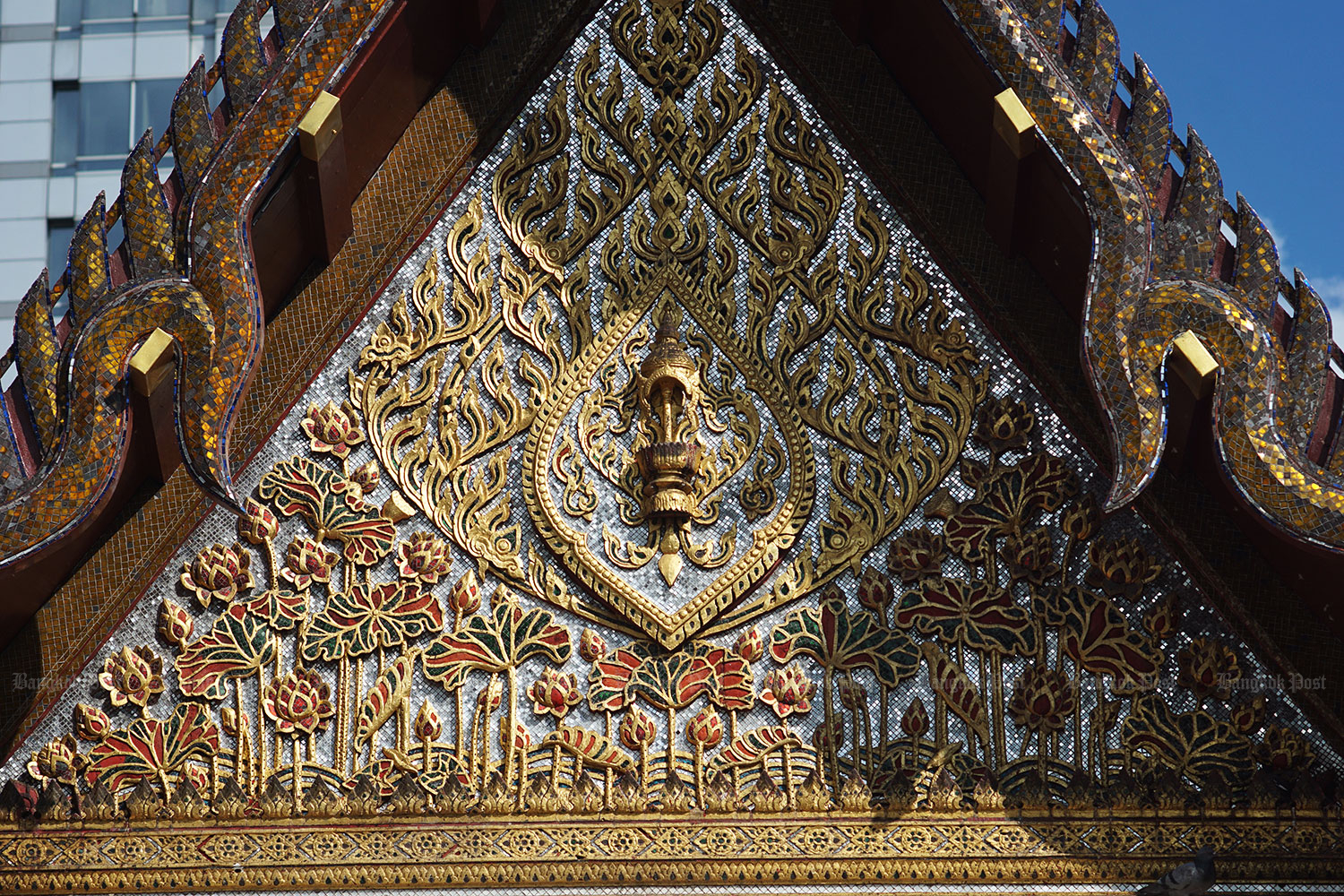 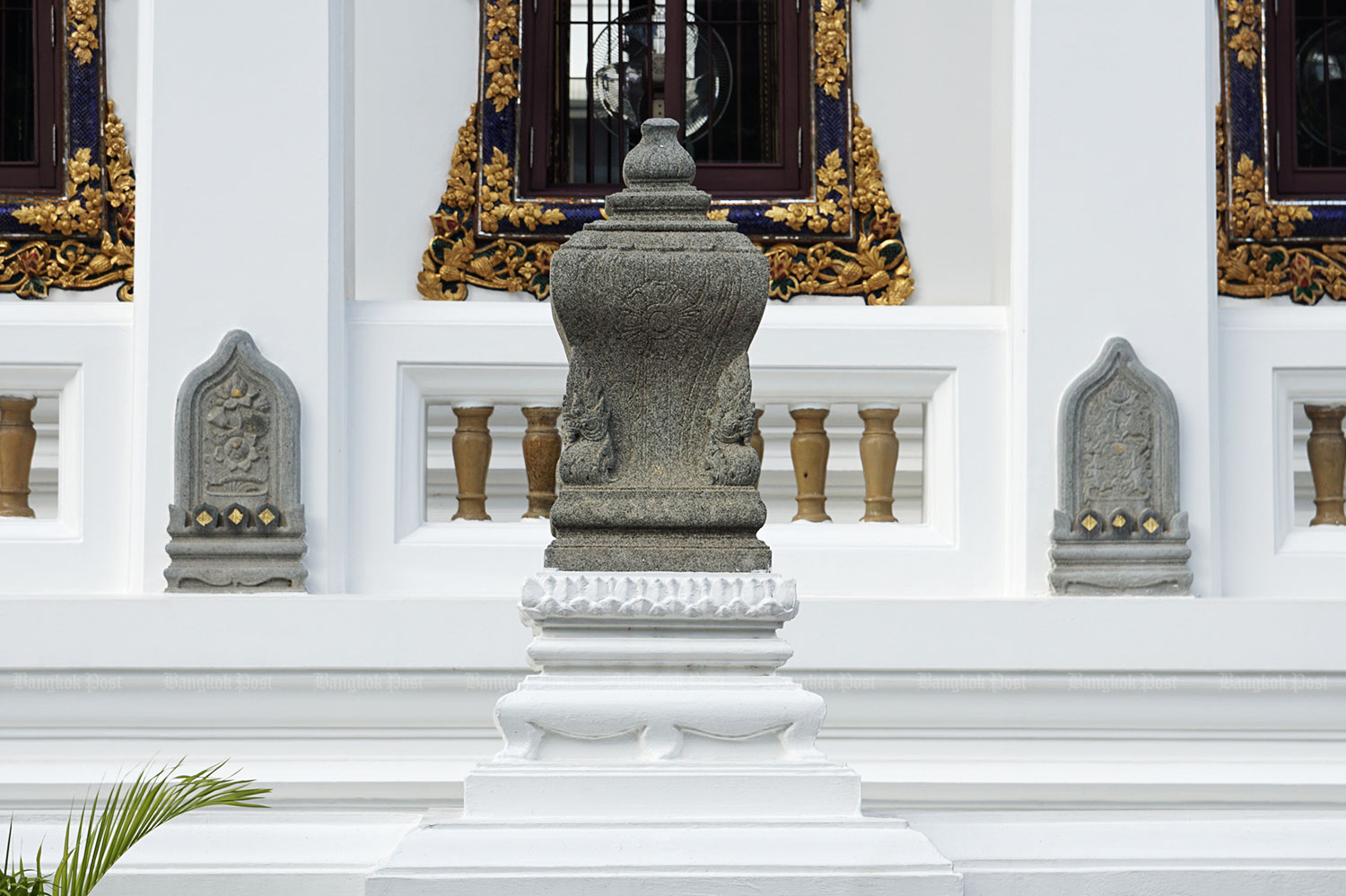 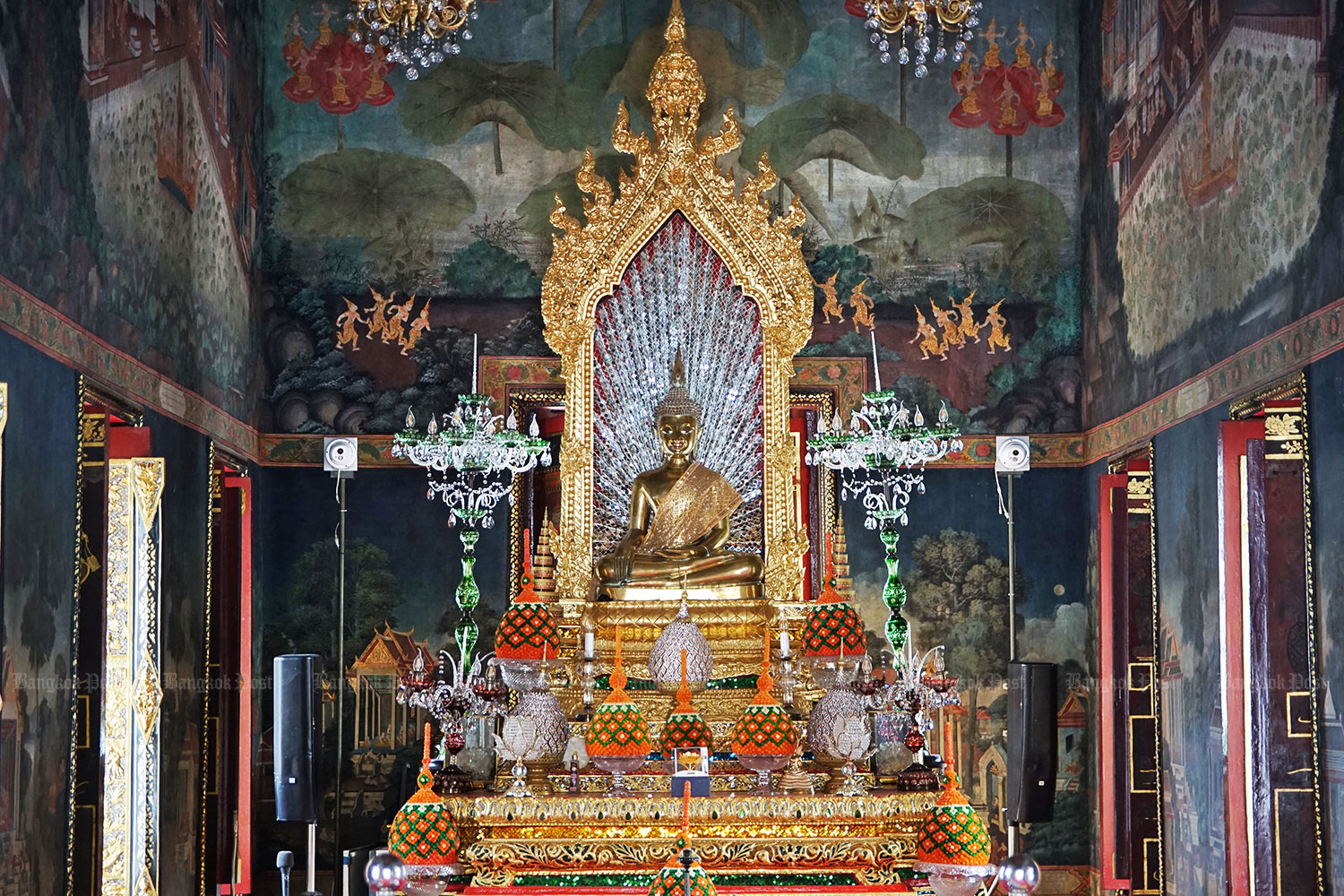 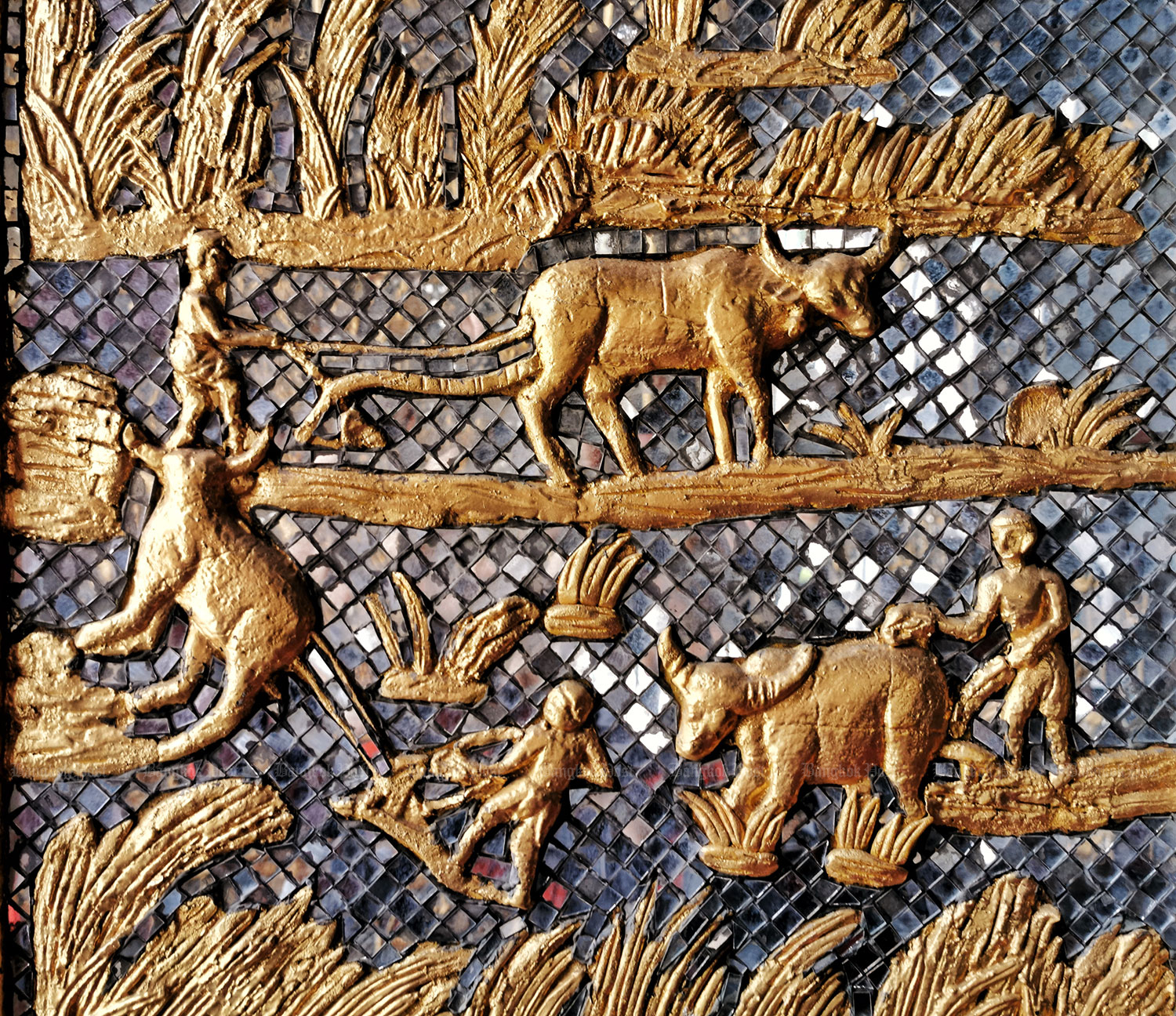 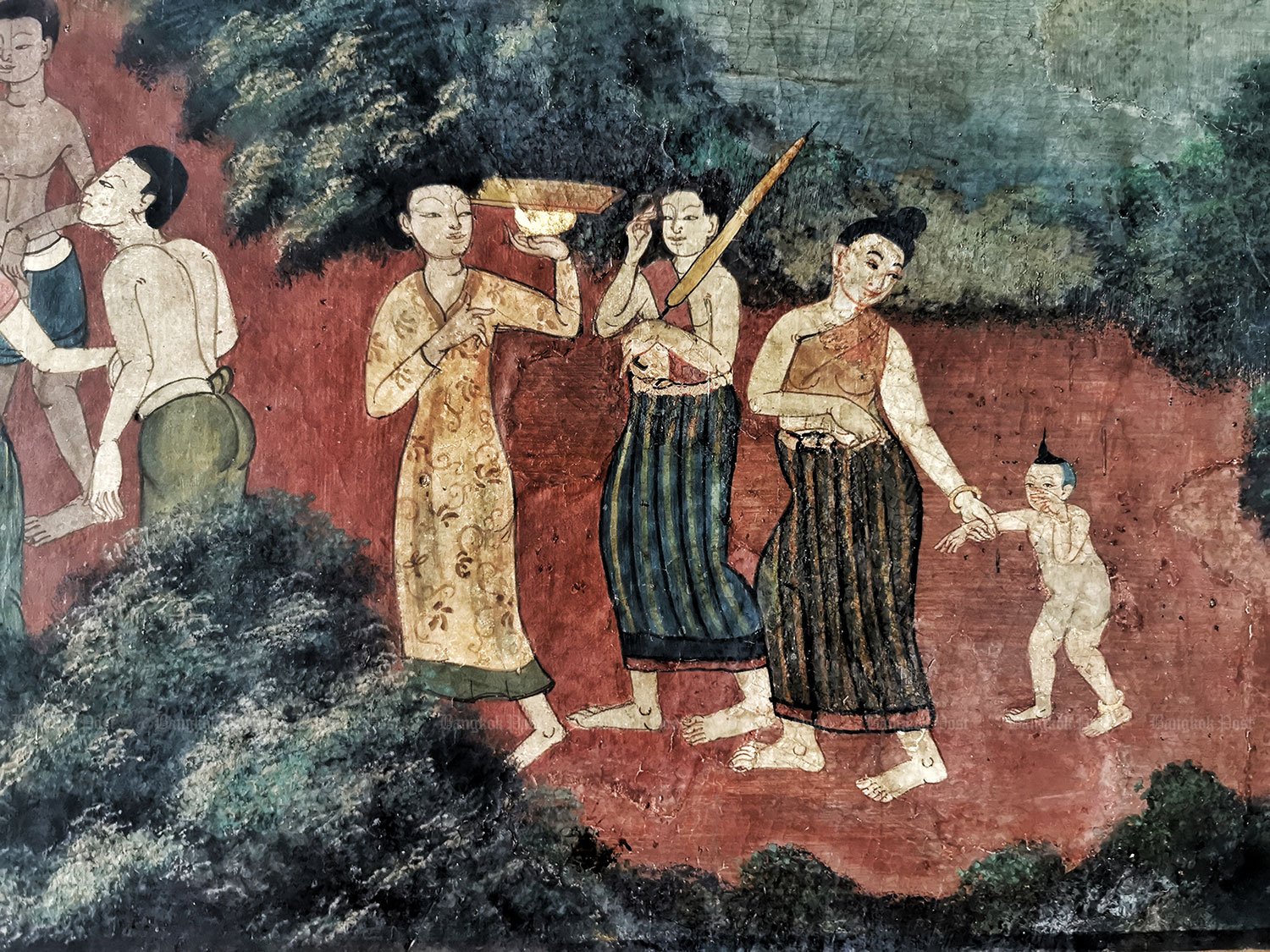 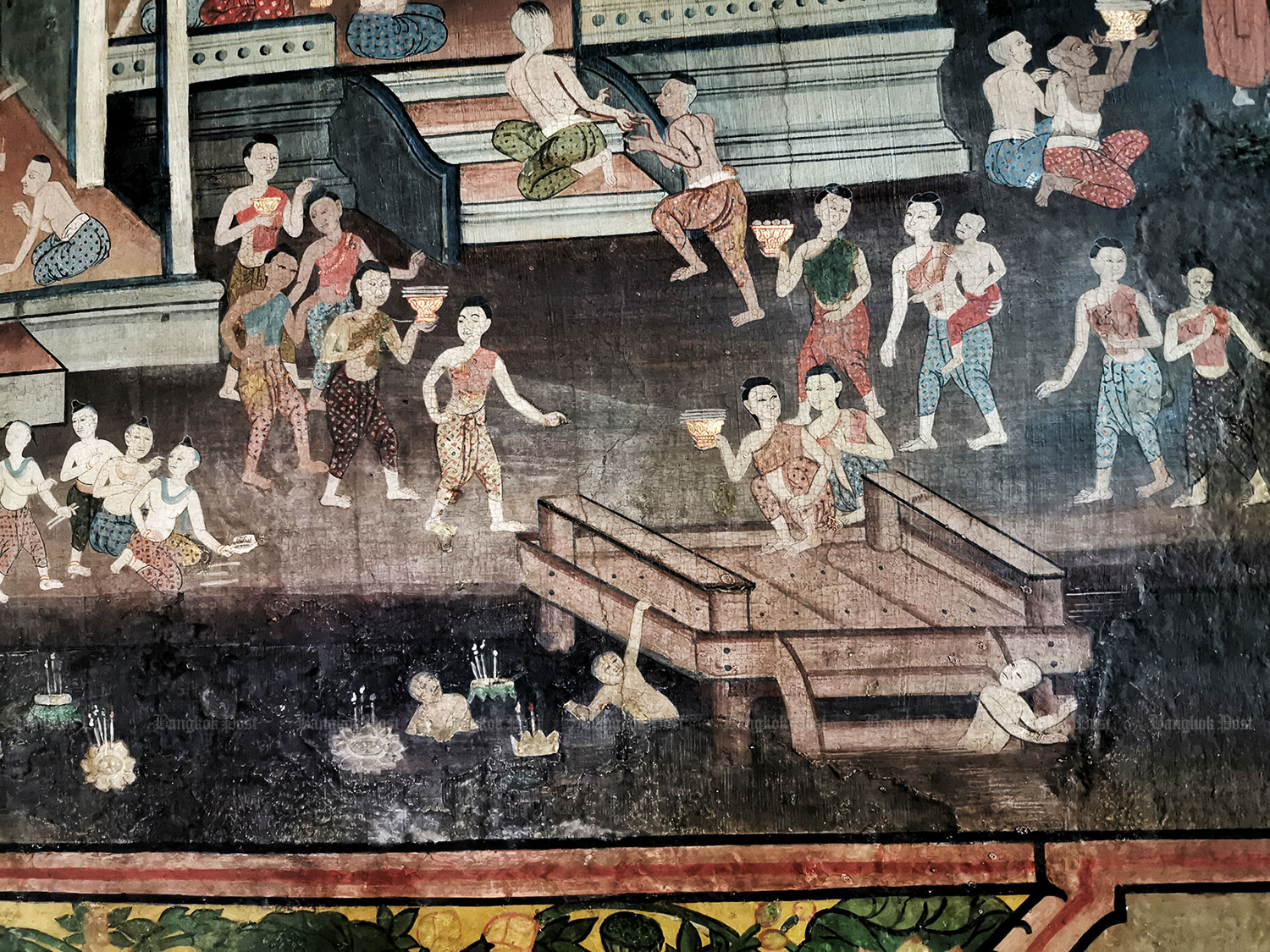 In the ubosot of Wat Pathum, the sacred Phra Sai is the principal Buddha statue. The building is marked on all sides by bai sema demarcation stones which means that the place is sanctified and can be a venue for the ordination of monks. Like the vihan, the ubosot houses a precious collection of murals. They depict not just people’s ways of life but also festivals such as Loy Krathong. The gables and door panes are carved wood and stucco with the projecting parts in gold and small pieces of shiny mirror filling the background. 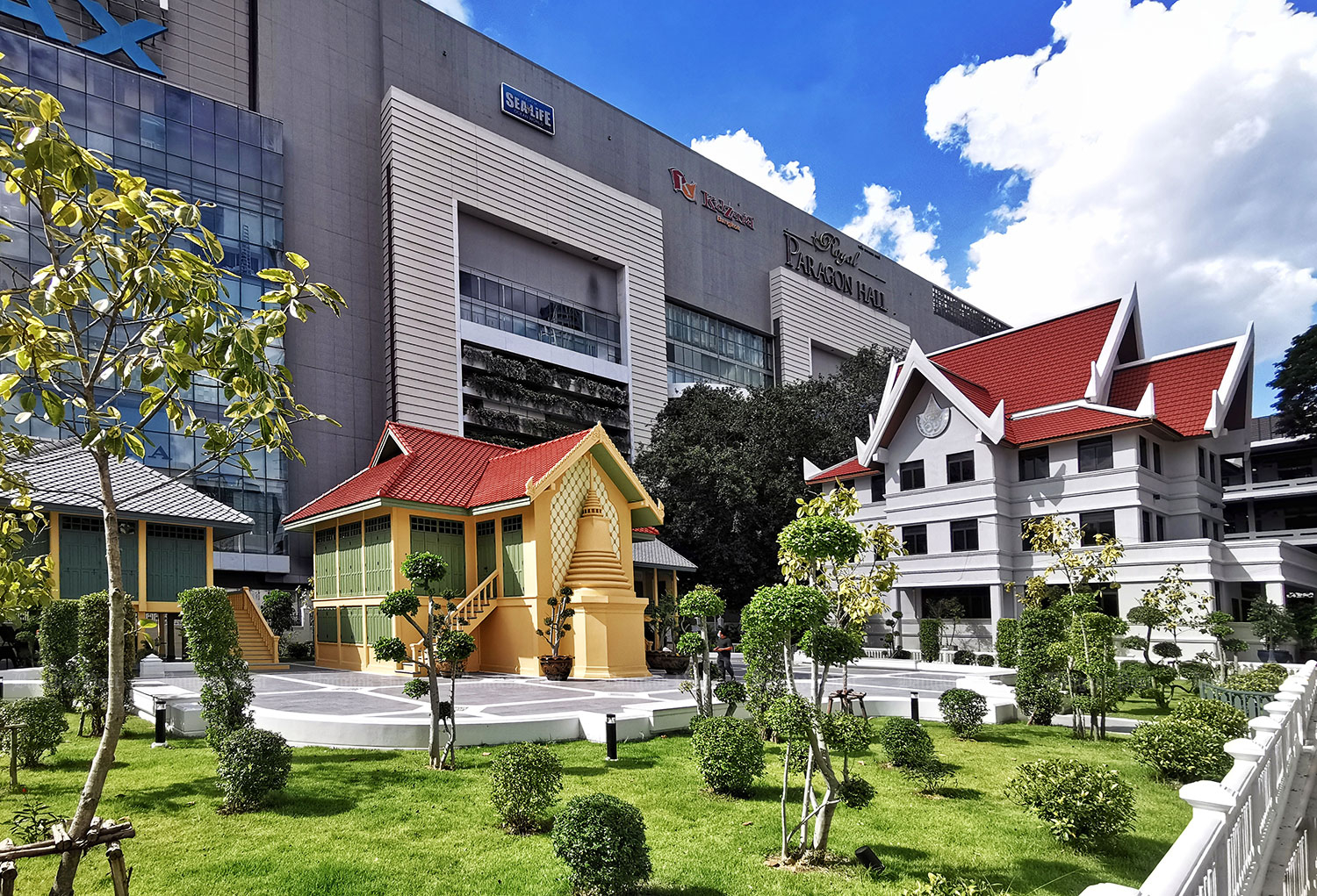 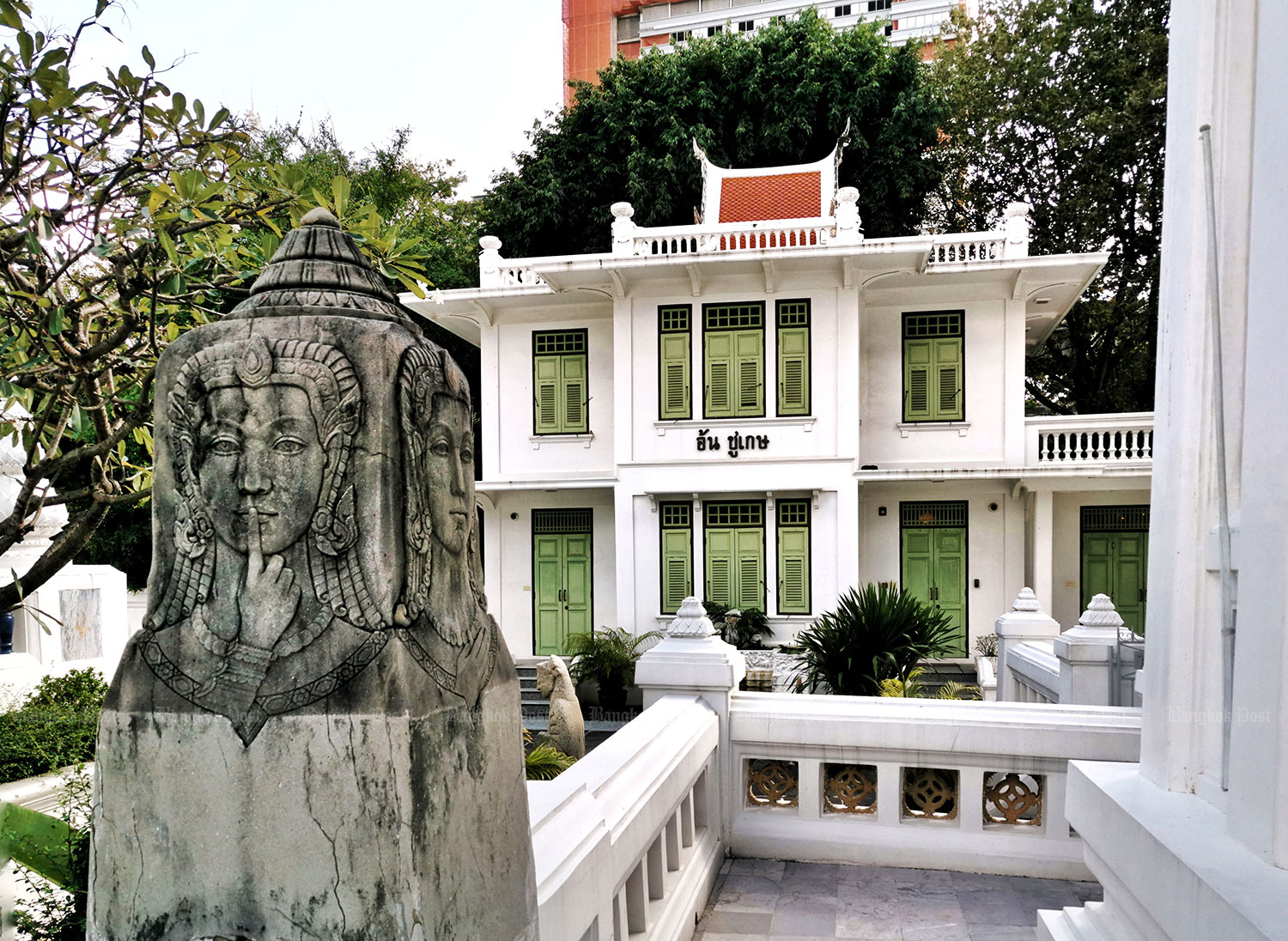 On top of Thai religious architecture in the phutthawat zone, Wat Pathum also comprises a number of structures with Western influences. The most important of these beautiful buildings is located on the west side of the temple’s compound. Designed with a stupa fixed on its east wall, it is a place where relics of the members of the Mahidol royal family, including Prince Mahidol, his wife Princess Srinagarindra, and their children King Rama VIII and Princess Galyani Vadhana, are enshrined. In one of the photos, you’ll also see a four-sided stone sculpture with a woman’s face on each side. King Rama VII had it added to the exterior of the vihan in memory of Khunying Nit Manopakorn Nititada, who died in a car accident while joining the entourage of the king and Queen Rambhai Barni when they visited French Indochina in 1930. Khunying Nit was the wife of Phraya Manopakorn Nititada, who two years later, after the Siamese revolution of 1932, became the country’s first prime minister. In less than a year, his government was toppled in a coup led by one of the revolution leaders, Phraya Phahonphonphayuhasena, who replaced him as prime minister. 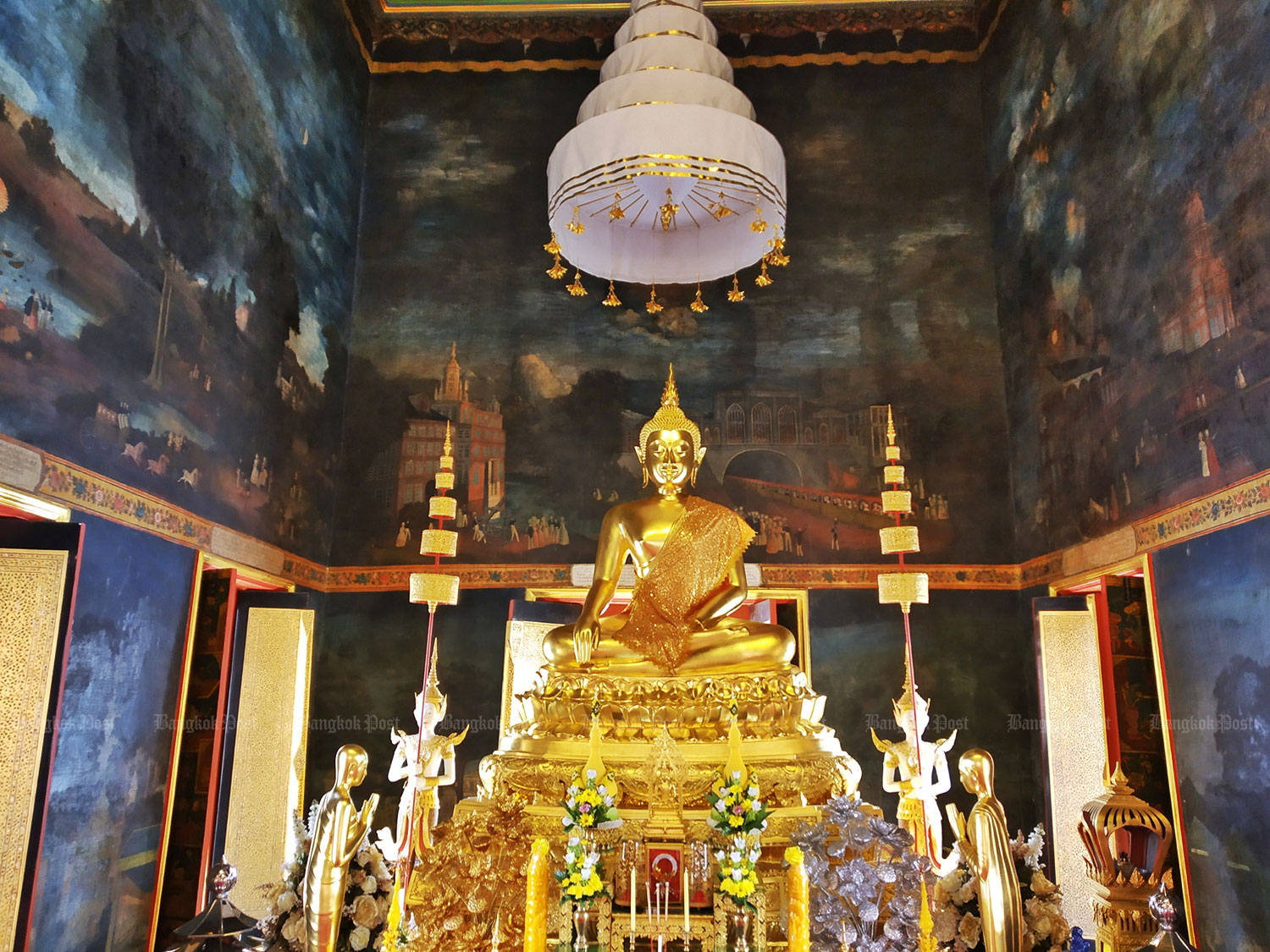 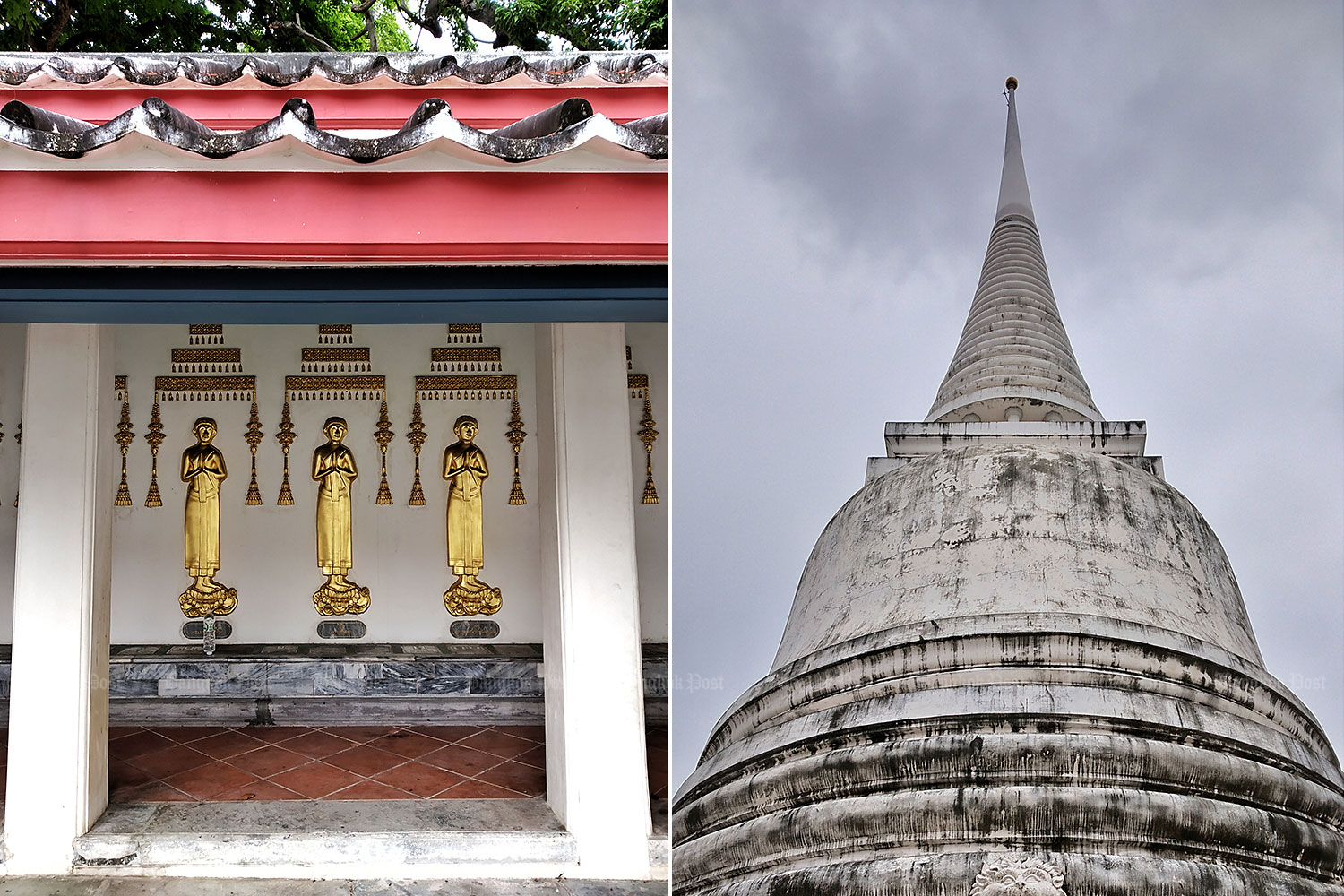 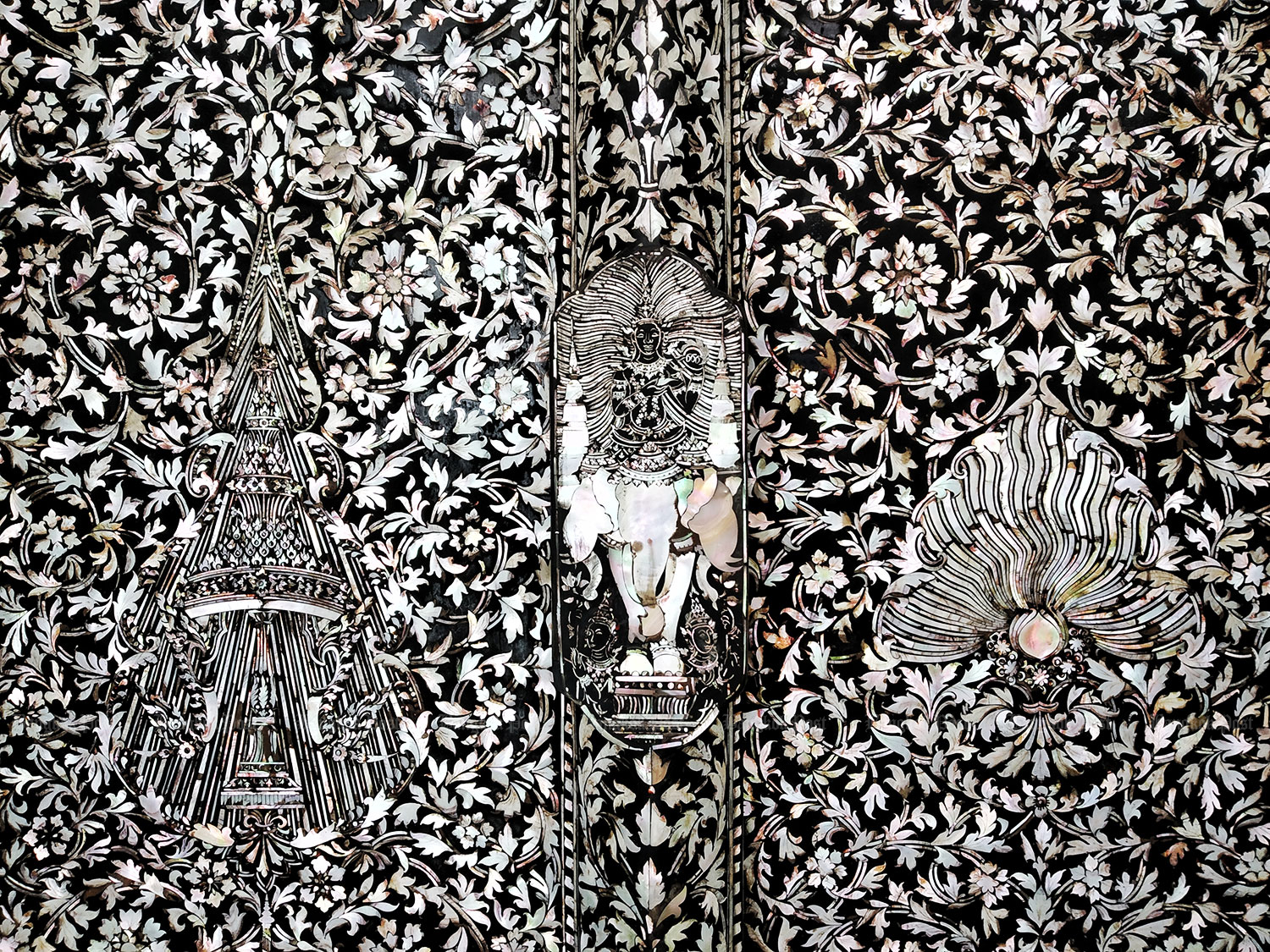 Not so far from Wat Pathum lies Wat Borom Niwat, another temple that has a connection with King Mongkut. In the 19th century, waterways were Bangkok’s main mode of transportation. Measuring the distance along the nearby Saen Saep and Mahanak canals, the two temples are about 2km apart. In 1834, while he was still in monkhood during the reign of King Rama III, King Mongkut adopted an unfinished temple called Wat Borom Suk. He had it completed and after his ascension to the throne in 1851 renamed it Wat Borom Niwat. These two temples of King Mongkut are pretty similar in architectural style. Their white pagodas, for example, have the same form. Both have even vents made in the shape of lion heads. The ubosot of Wat Borom Niwat boasts intricate gables and murals by Khrua In-khong, a monk and artist who was among the first to incorporate Western techniques into Thai painting. 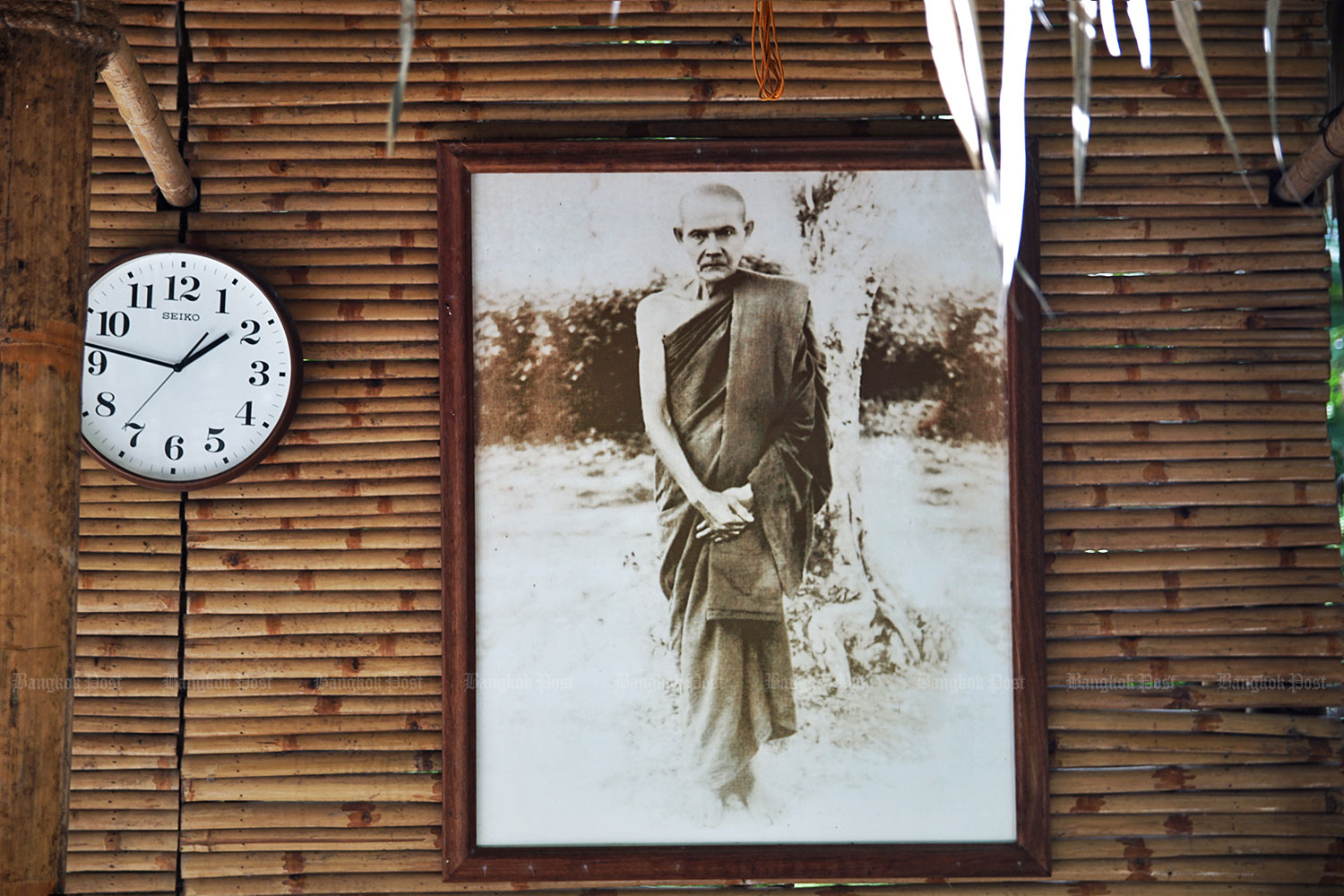 Luang Pu Man Bhuridatto (1870-1949), the grand teacher of forest monks, usually visited Wat Pathum and Wat Borom Niwat when he came to Bangkok. At Wat Pathum, there is a museum dedicated to the life and teachings of the revered monk. 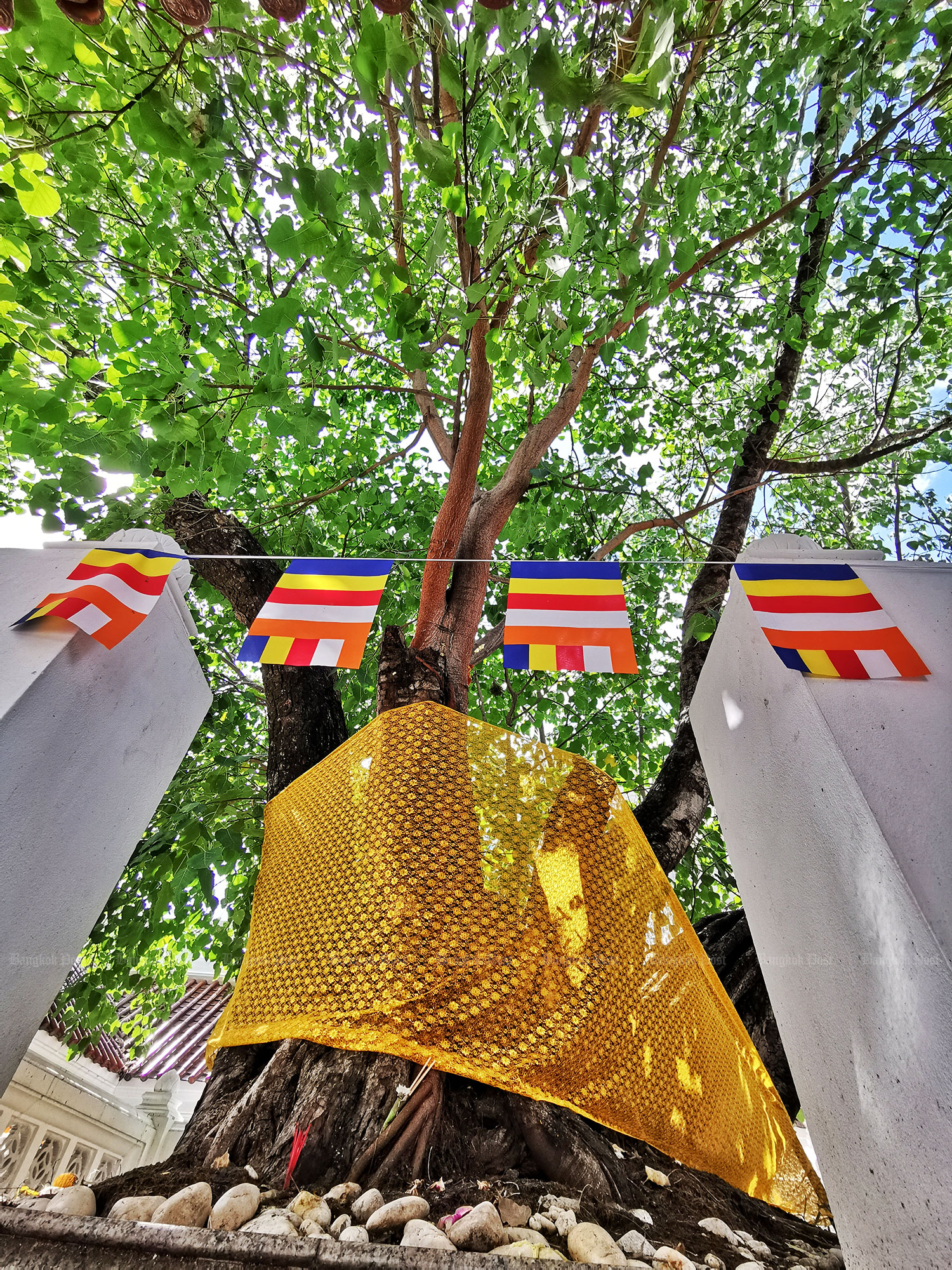 This Bodhi tree is grown within a structure built specially for it behind the prayer hall. The tree was brought from Sri Lanka during the time of King Rama IV.

Wat Pathum’s most important Buddha statues are Phra Sai in the ordination hall and Phra Soem and Phra Saen in the prayer hall. However, people’s respect is not limited to the three statues. As you can see in the photos, even the Naga and Chinese sculptures also receive offerings. Cynics may see it differently, but let’s call this freedom of faith. 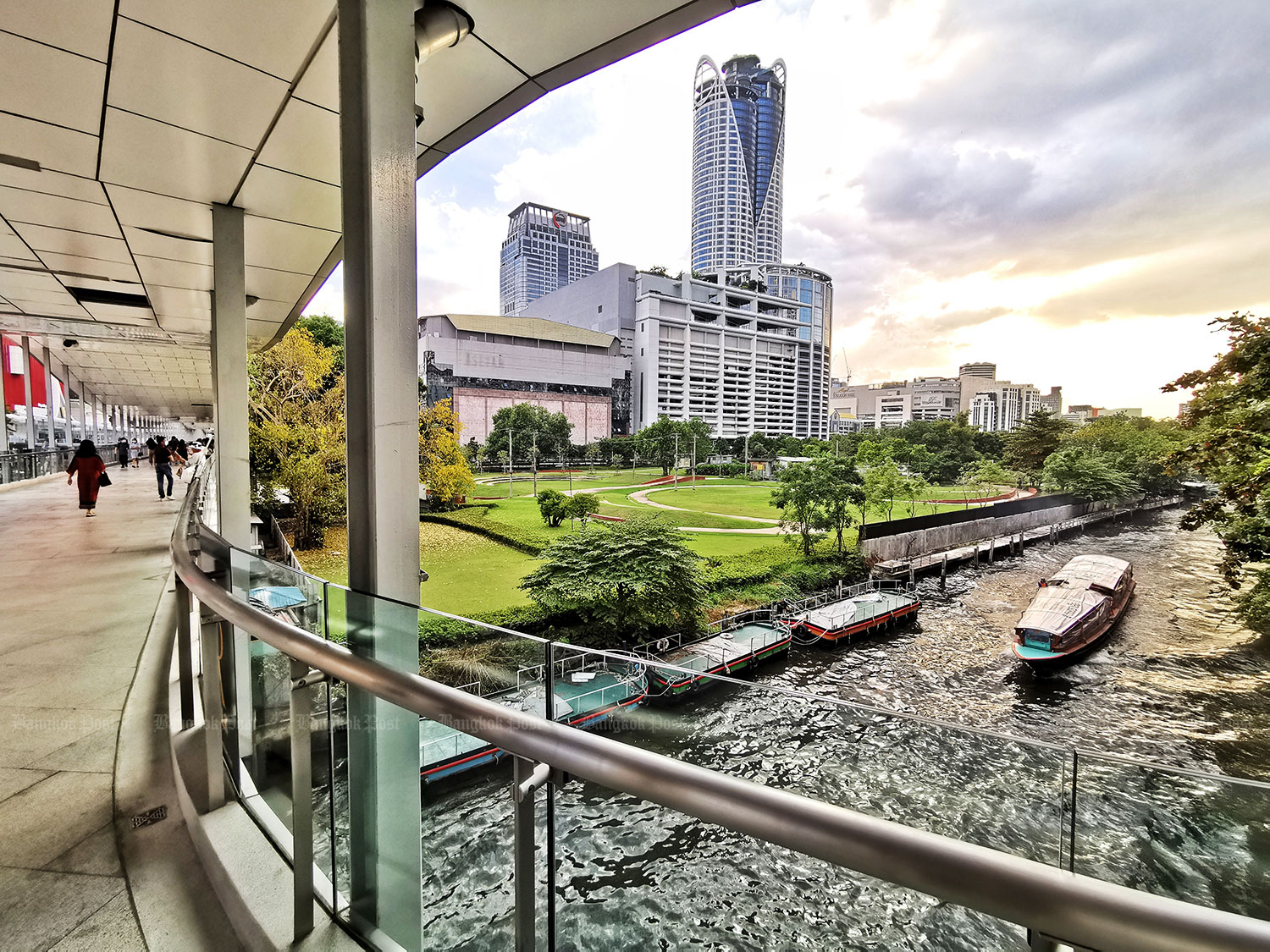 These days, paddle boats are rarely seen in the Saen Saep and Mahanak canals and motorised passenger boats regularly ply the waterways. The canal-side green area is Suan Pathum Wanarak, a public park of which the opening has been delayed for years simply because a small number of squatters refuse to leave. 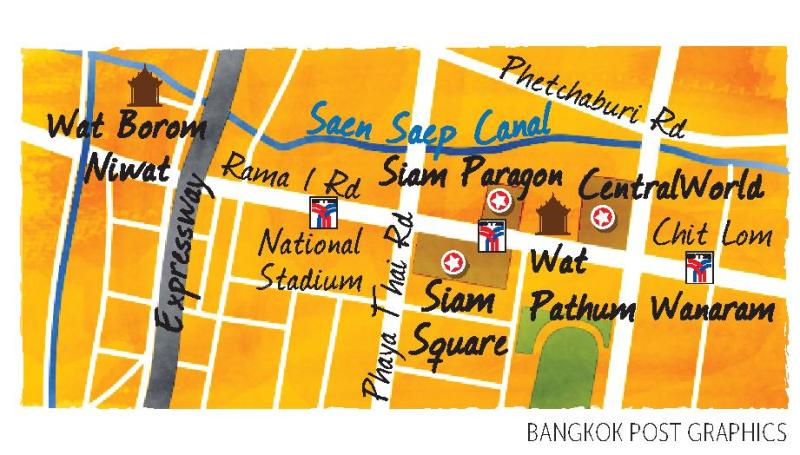