While Unesco seeks to grant special status to Bangkok's more popular structures, the capital city is already teeming with Instagrammable and honoured buildings worthy of a visit

During the past two decades of the Unesco Heritage Awards for Cultural Heritage Conservation, 14 places in Thailand have received recognition.

They can be categorised into groups of old palaces, temples, houses/commercial buildings and communities..

At present, the award programme is open for submission. Categories include awards for Excellence, Distinction, Merit, New Design in Heritage Contexts, and the new Special Recognition for Sustainable Development.

The United Nations Educational, Scientific and Cultural Organization (Unesco) encourages individuals and organisations to participate in the programme. The deadline for submission (bangkok.unesco.org/content/apply-awards) is July 31. Winners will be announced in December.

Meanwhile, let's revisit six places that received the awards and honourable mentions in the capital. 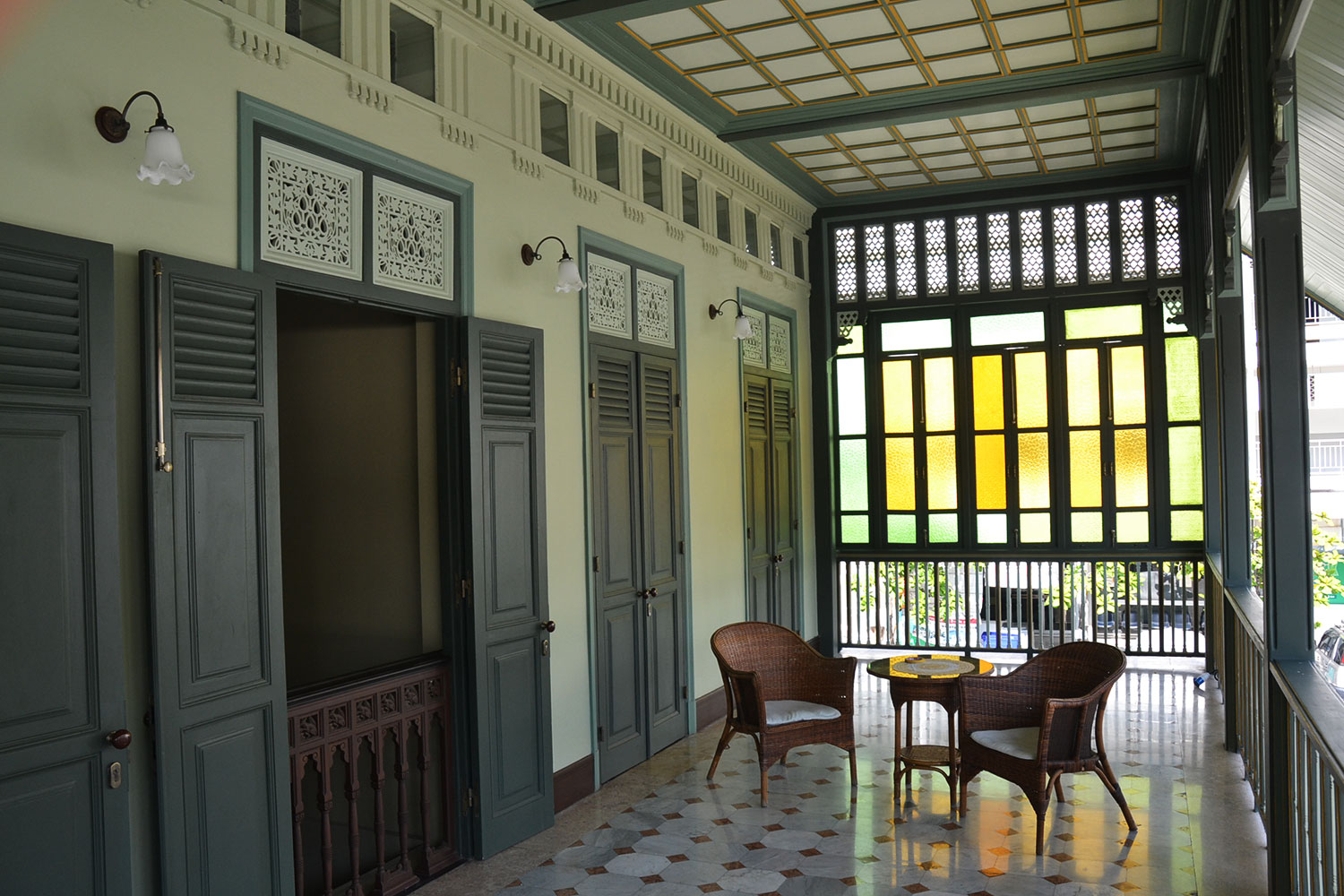 The old residence of Phraya Si Thammathirat and the interior design of the mansion. (Photo: Pichaya Svasti)

The mansion was designed by the homeowner Phraya Si Thammathirat (Choem Boonyarattapan), permanent secretary of the Interior Ministry from 1922-1929. He had a heart for the arts so he designed his home to be functional and unique, reflecting the eclecticism with the influence of colonial architecture with a mix of Thai and Chinese arts.

From afar, it looks like the green building with a tall and long roof is made of hardwood, but it is made of concrete with a touch of finely crafted woodwork. Visitors to the mansion are awed by the breathtaking beauty of the interior design, mural paintings and decorative items in every corner of the house.

At present, the mansion belongs to the Crown Property Bureau. The Sitabutr Bamrung School has rented the land from the bureau since 1981. It once used the building for its kindergarten students. When the century-old building was damaged due to time and lack of proper maintenance, the school wanted to demolish it for a new building.

The landlord disagreed, citing that it was a historical site. Although the maintenance cost was higher than building a new structure, the bureau managed to convince the tenant to restore the mansion. The school owner, the Thai-Chinese Foundation for Education and Culture, finally agreed to the project after five years of negotiation. It paid 12 million baht for the restoration while the bureau pitched in 1.6 million baht. The renovation started in 2011 and was overseen by the Fine Arts Department. The project was finished within two years.

The mansion was eventually restored to its original beauty. The structure serves as a reception hall for the school today. The joint effort of the school and bureau was worth recognition. In 2014, the project won the Award of Merit of the Unesco Asia-Pacific Heritage Awards for Cultural Heritage Conservation.

THE ICONIC STUPA IN THON BURI

Located on the banks of the Chao Phraya River on the Thon Buri side, the 60.5m-high Phra Borommathat Maha Chedi, or "white stupa", is located on the 29 rai site of Wat Prayurawongsawat Worawihan, also known as Wat Prayoon. 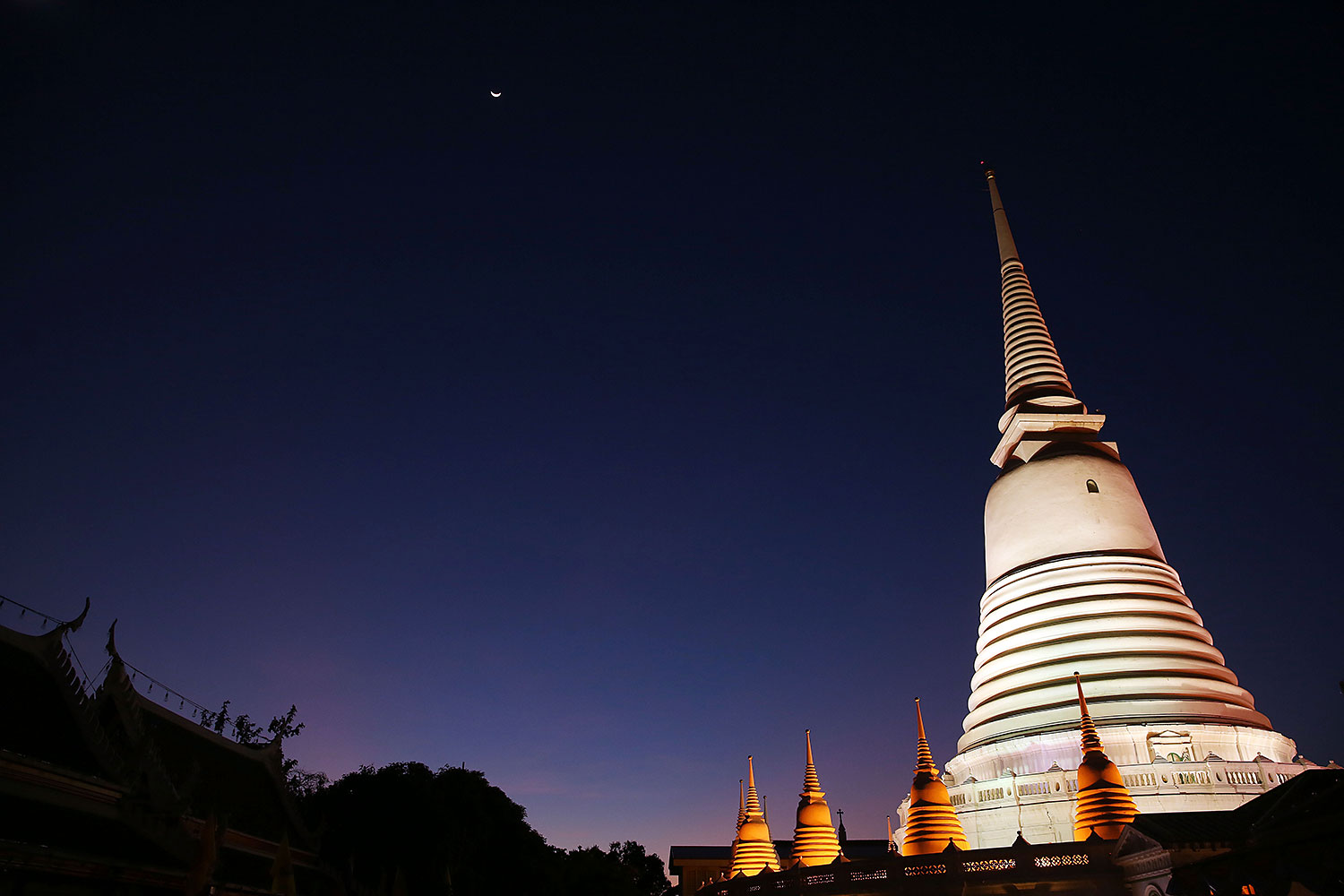 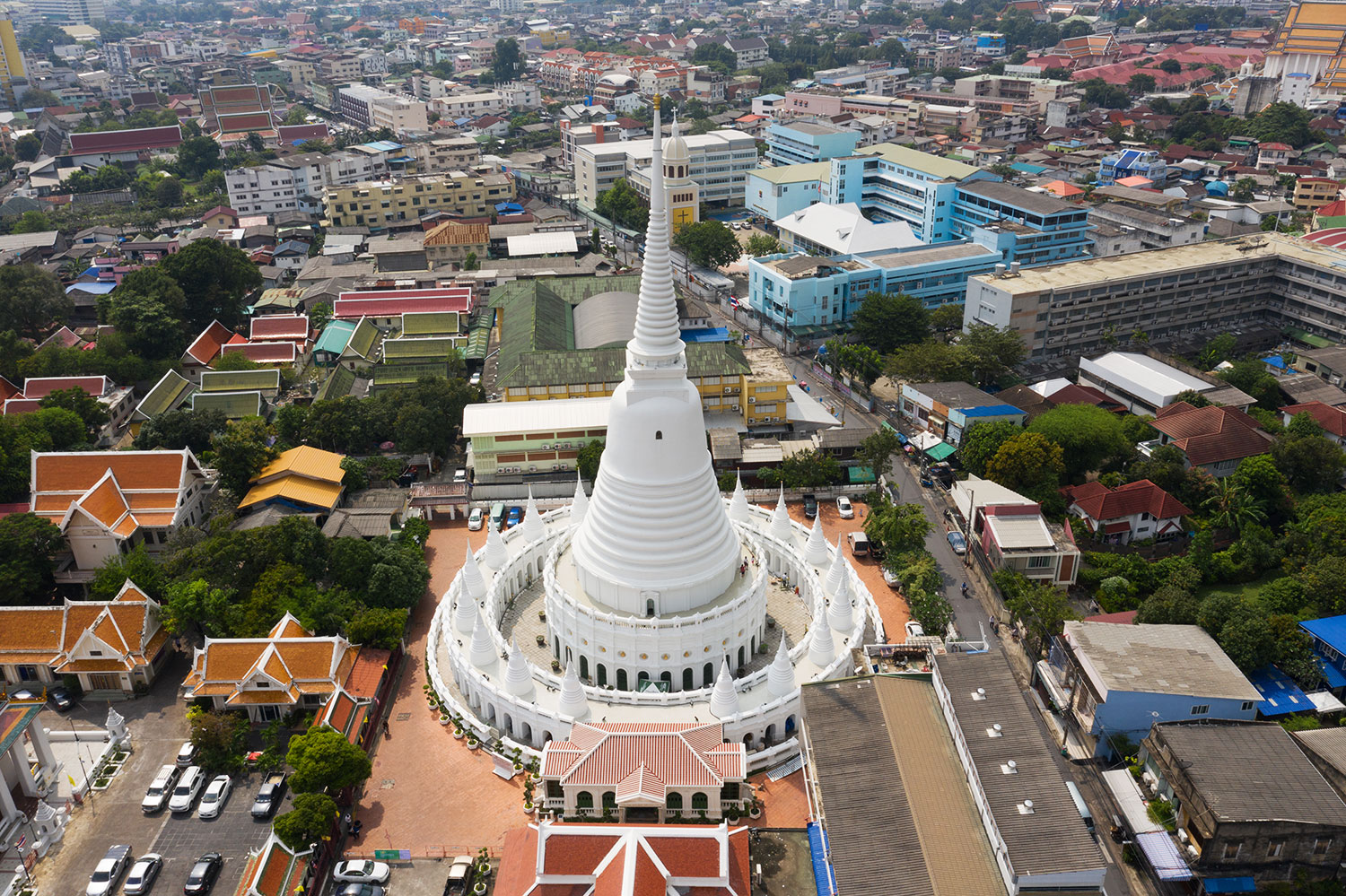 Housed in the stupa are Buddha relics and Buddha images. The structure is also surrounded by 18 smaller bell-shaped stupas.

Next to the base of the giant stupa is an adjoining hall named Pharin Pariyatti Dhamma Sala. It was built in 1885 by the temple founder's son. Chao Phraya Passakornwong (Pon Bunnag) wanted to build the hall and dedicate it to his parents. The Dhamma Sala was once used as a dhamma school for Buddhist monks and novices. Today it is a museum displaying numerous collections of Buddha images and precious old items found inside the stupa when it was under the big renovation about 15 years ago.

The renovation of the giant stupa started in 2005 when the present abbot Phra Brahmapundit noticed the leaning. The expert team from King Mongkut's Institute of Technology Ladkrabang found that the structure leaned 1m towards the river. The restoration started shortly in 2006. It took about five years to be completed with a budget of 38 million baht. The fund was supported by local residents and the Office of National Buddhism.

Those who visit the temple today will have a chance to see the technique of the restoration that shows the harmonisation of modern engineering and traditional methods. Visitors can pay respect to the Buddha relics kept inside the stupa.

In 2013, Phra Borommathat Maha Chedi and its adjoining hall won the Award of Excellence of the Unesco Asia-Pacific Heritage Award for Cultural Heritage Conservation, the first time in the country's history.

Located on Mahachai Road and a short walk from Mahakan Fort Park, Wat Thepthidaram Worawihan was founded in 1836 by King Rama III in honour of his eldest daughter, Princess Apsorn Sudathep. The temple name derived from the Thai word thida, meaning daughter. 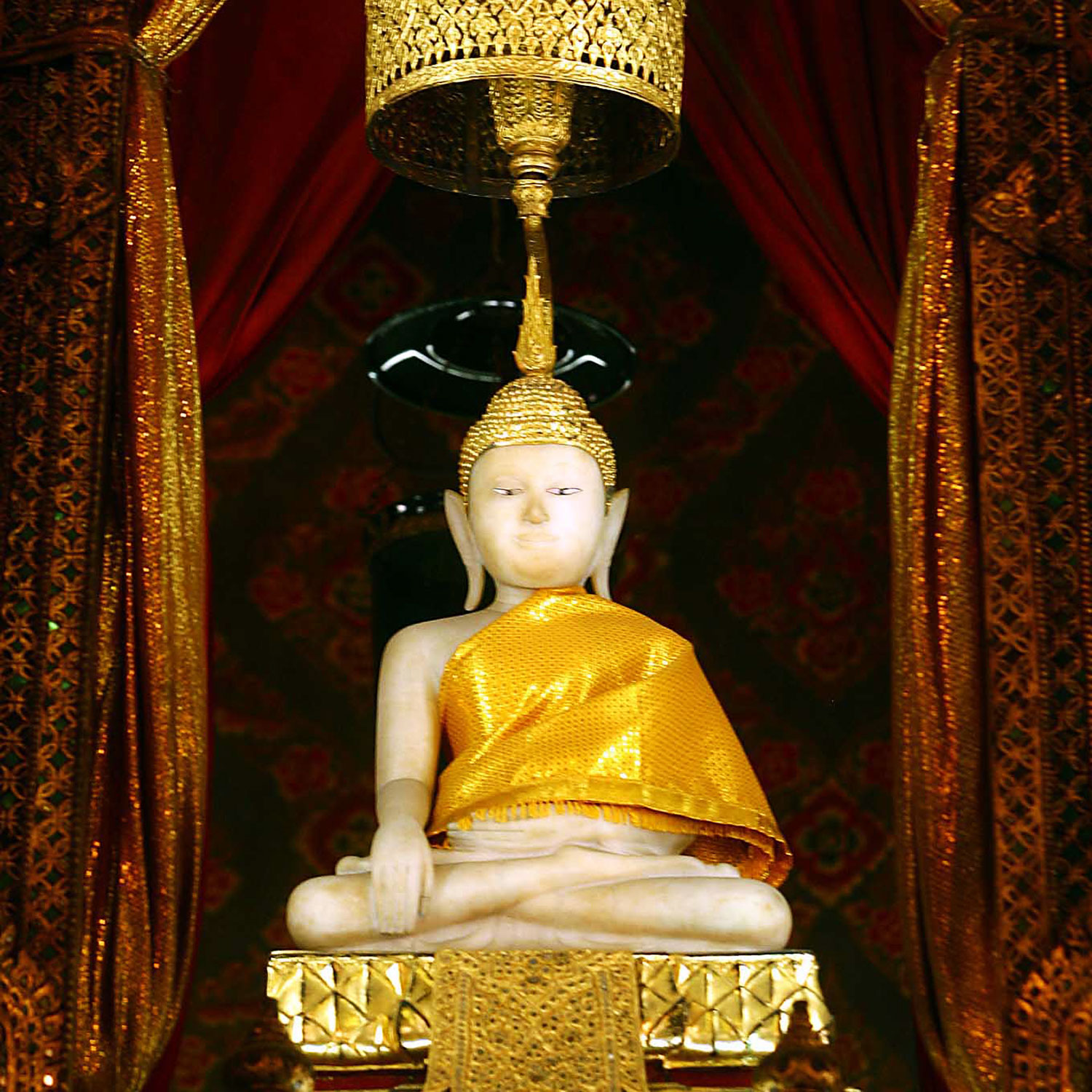 Luang Pho Khao is the principal Buddha image of the ordination hall of Wat Thepthidaram. 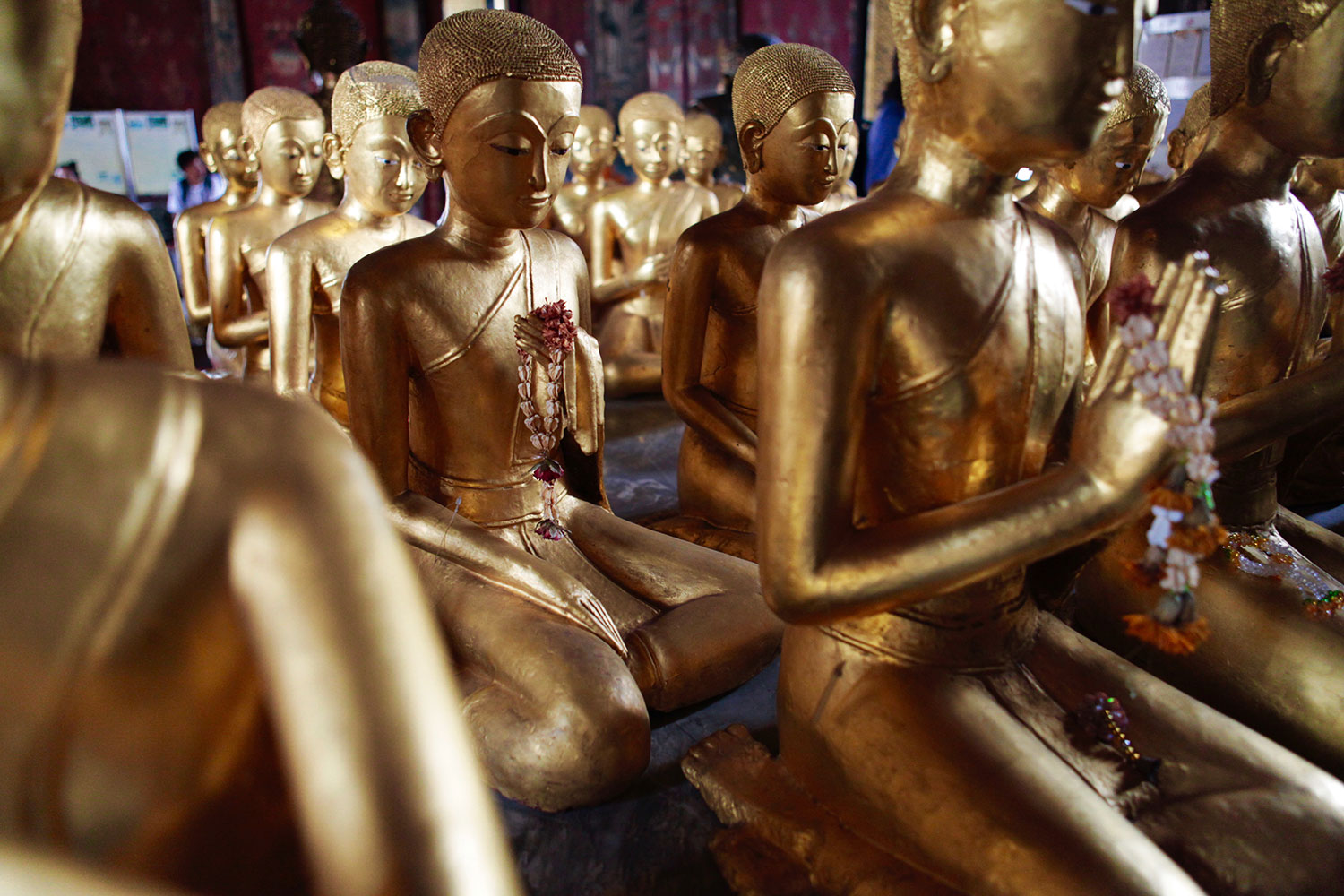 Housed in a prayer hall in Wat Thepthidaram, a group of 52 sculptures of female Buddhist monks known in Thai as bhikkhuni. 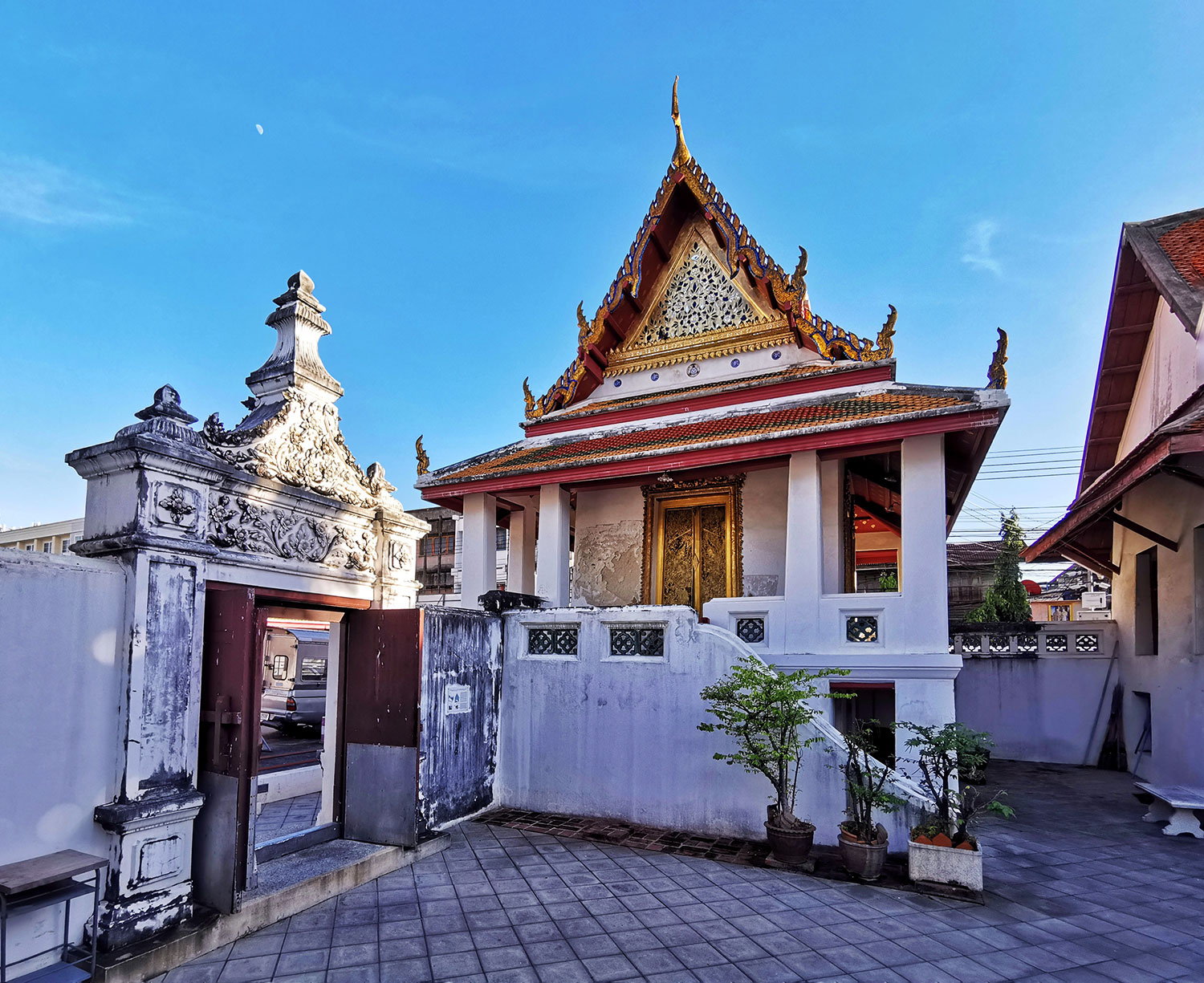 It is believed the king gave the beautiful Phra Buddha Dhevawilat, the seated white stone Buddha image in the attitude of subduing Mara from the Grand Palace, to be the principal image of the ordination hall of the temple. Locals call the image Luang Pho Khao due to the white colour stone of the sculpture.

Another highlight is the nearby prayer hall. The building houses a group of 52 rare sculptures of female monks known as bhikkhuni. Each of them has different postures while being seated and paying respect to the principal Buddha image in the hall. One sculpture holds a tool for making mak phlu (betel nut and leaf) while another two sculptures look like they are having a conversation. Another sculpture holds her palms together at the chest while the other raises her palms to her forehead. The different attitudes make them look as if they are alive.

King Rama III was said to have had the female monk sculptures made in order to reflect the feminine title of the temple. Other feminine characters found in the prayer hall are paintings of female guardians at the entrance door and three standing female monks next to the principal seated Buddha image.

Last but not least is the Ho Tri or scriptures hall, which won an Award of Merit from the Unesco Asia-Pacific Heritage Awards in 2011. The scriptures hall is located in the inner compound of the temple. It was built for keeping the Tripitaka for monks to study. The scripture hall was built on raised platforms. Later the walls were built on the ground floor, making it look like a two-storey building. The hall was badly damaged before it was restored to the present look by the Association of Siamese Architects. 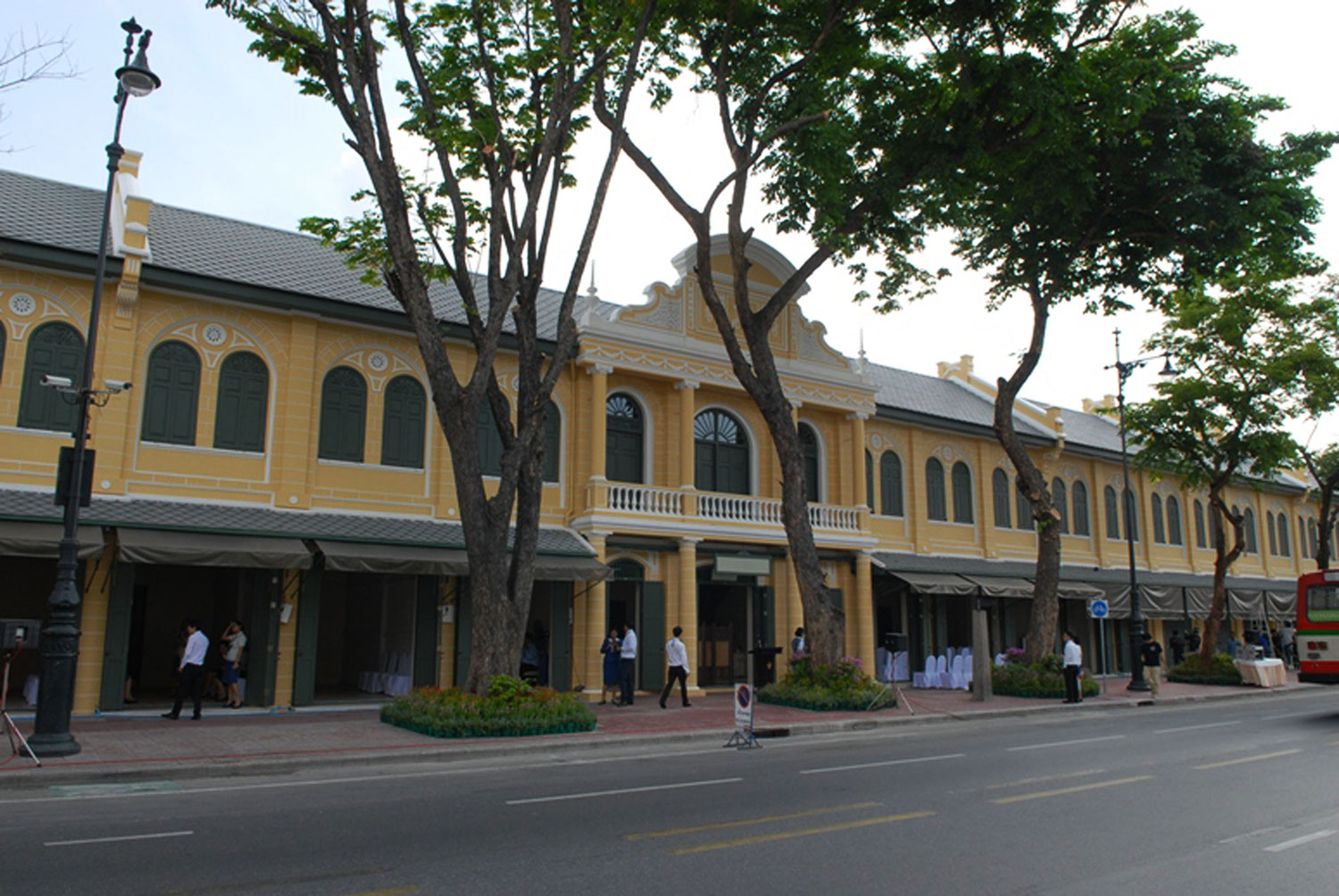 The row of old two-storey shophouses is located on Na Phra Lan Road opposite the entrance gate of the Grand Palace. Built around 1909, or during the period of King Rama V, the century-old colonial-style buildings are owned by the Crown Property Bureau.

The design and decorations are appealing thanks to the art on the pediments as well as the harmonious design including wooden folding doors and craftwork on the top of windows of each shophouse.

Regarded as a national heritage, the Crown Property Bureau kicked off the renovation project in 2008. It took about two years for the bureau to persuade tenants to agree to the conservation project. The facelift process took about eight months for repairing and painting. The old shophouses today are home to gift shops, a convenience store, a post office, a bank, coffee shops and restaurants.

In the future, there will be two underground tunnels of 37m and 96m long across Na Phra Lan Road that will create more shopping spaces as well as help facilitate tourists. The 945 million baht project is about 30% completed and expects to be finished by next year.

PALACE OF THE REMARKABLE PRINCE

Located in the compound of the Bank of Thailand on Samsen Road, Tamnak Yai of Devavesm Palace received an Honourable Mention award in 2005. 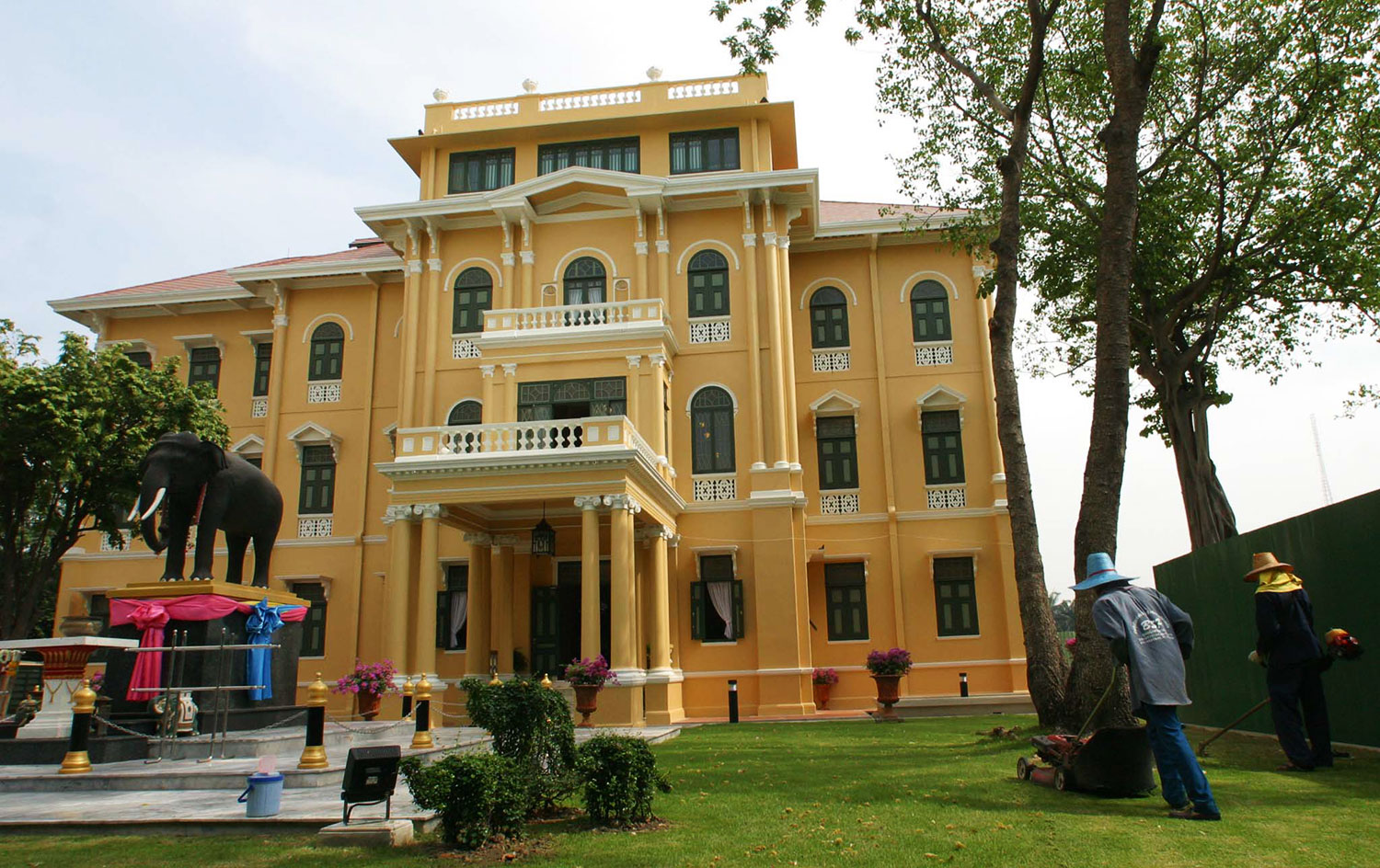 The three-storey, vanilla-coloured Devavesm Palace is located in the compound of the Bank of Thailand. (Photo: Pawat Laopaisarntaksin) 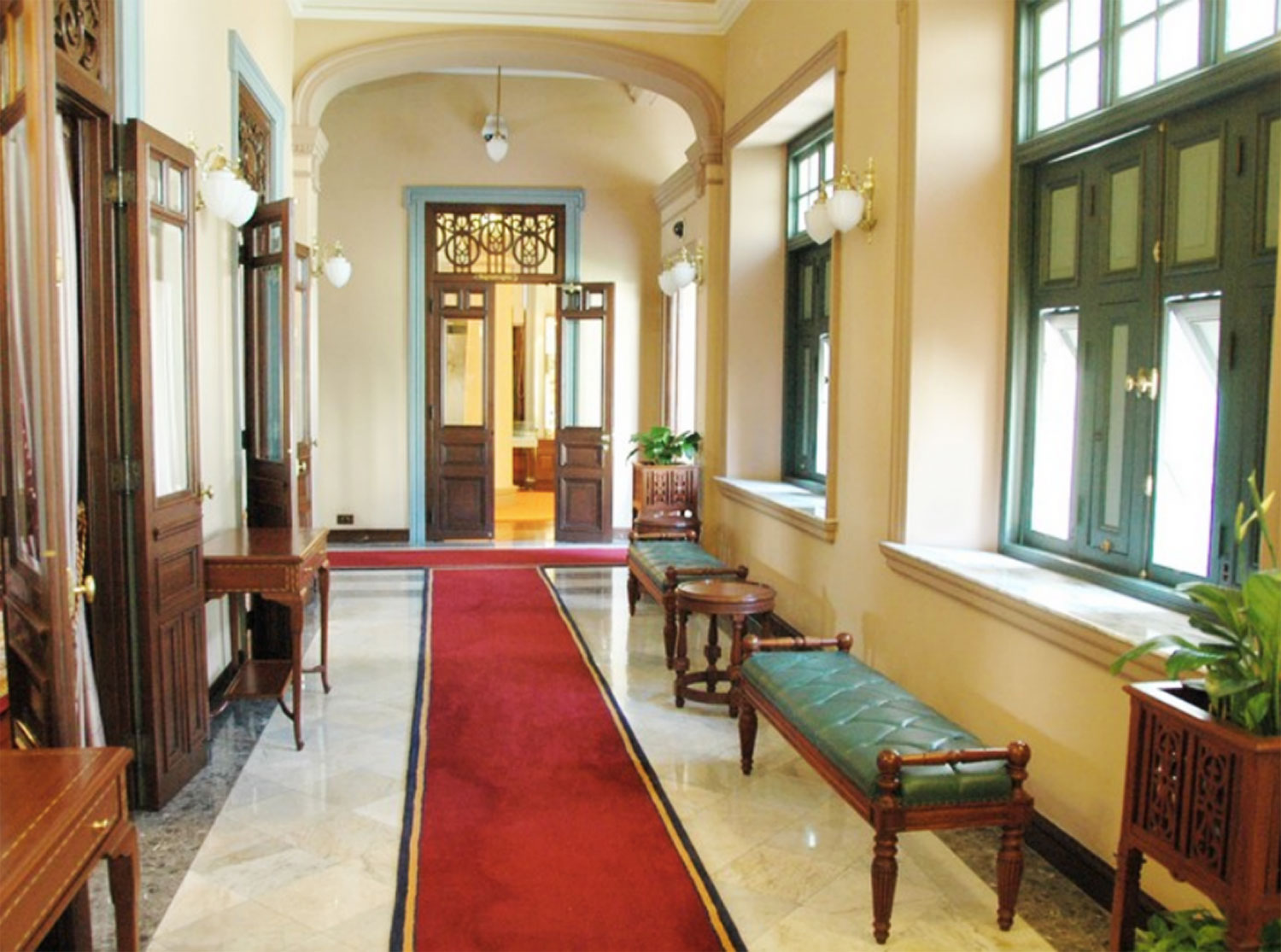 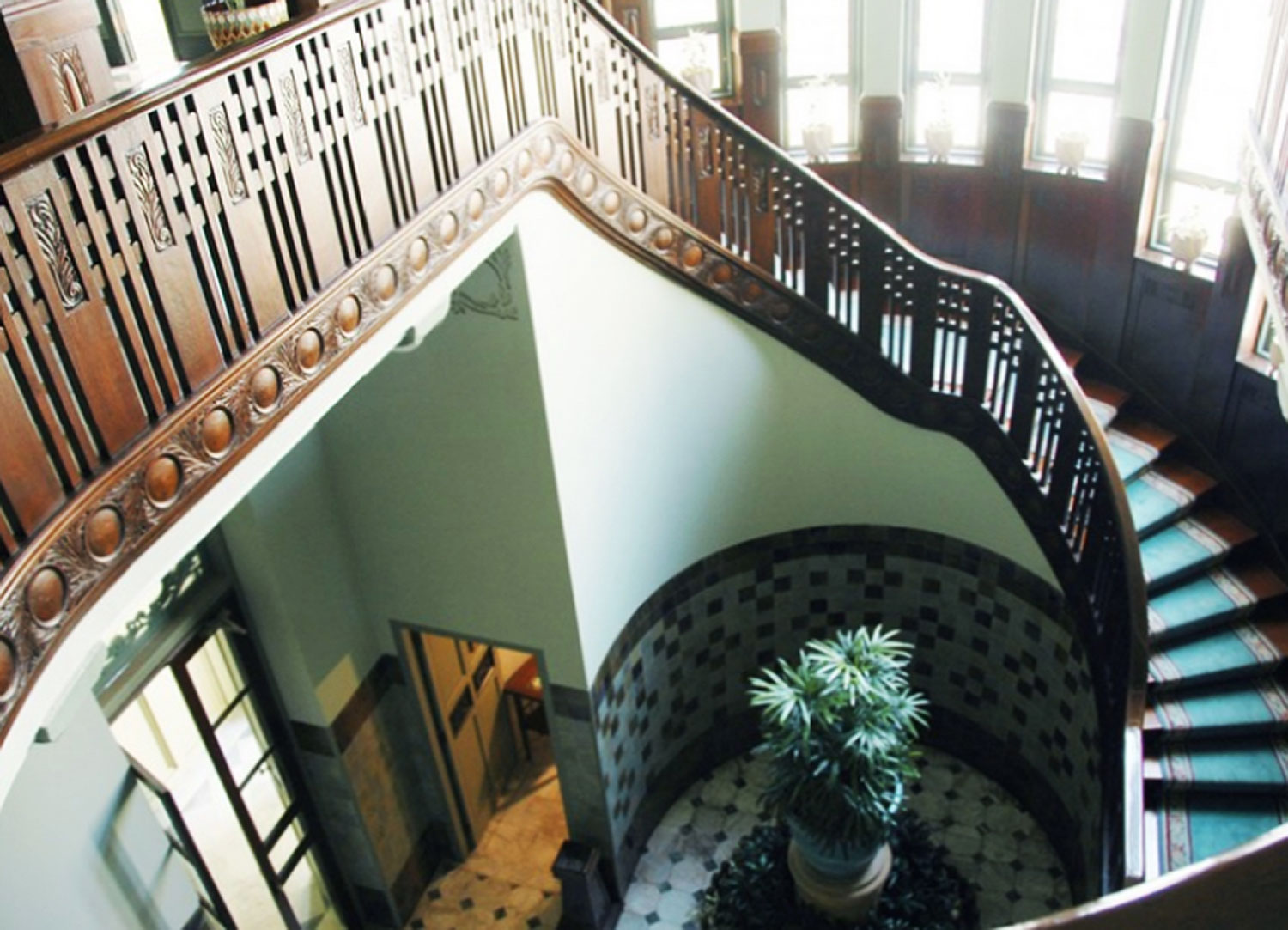 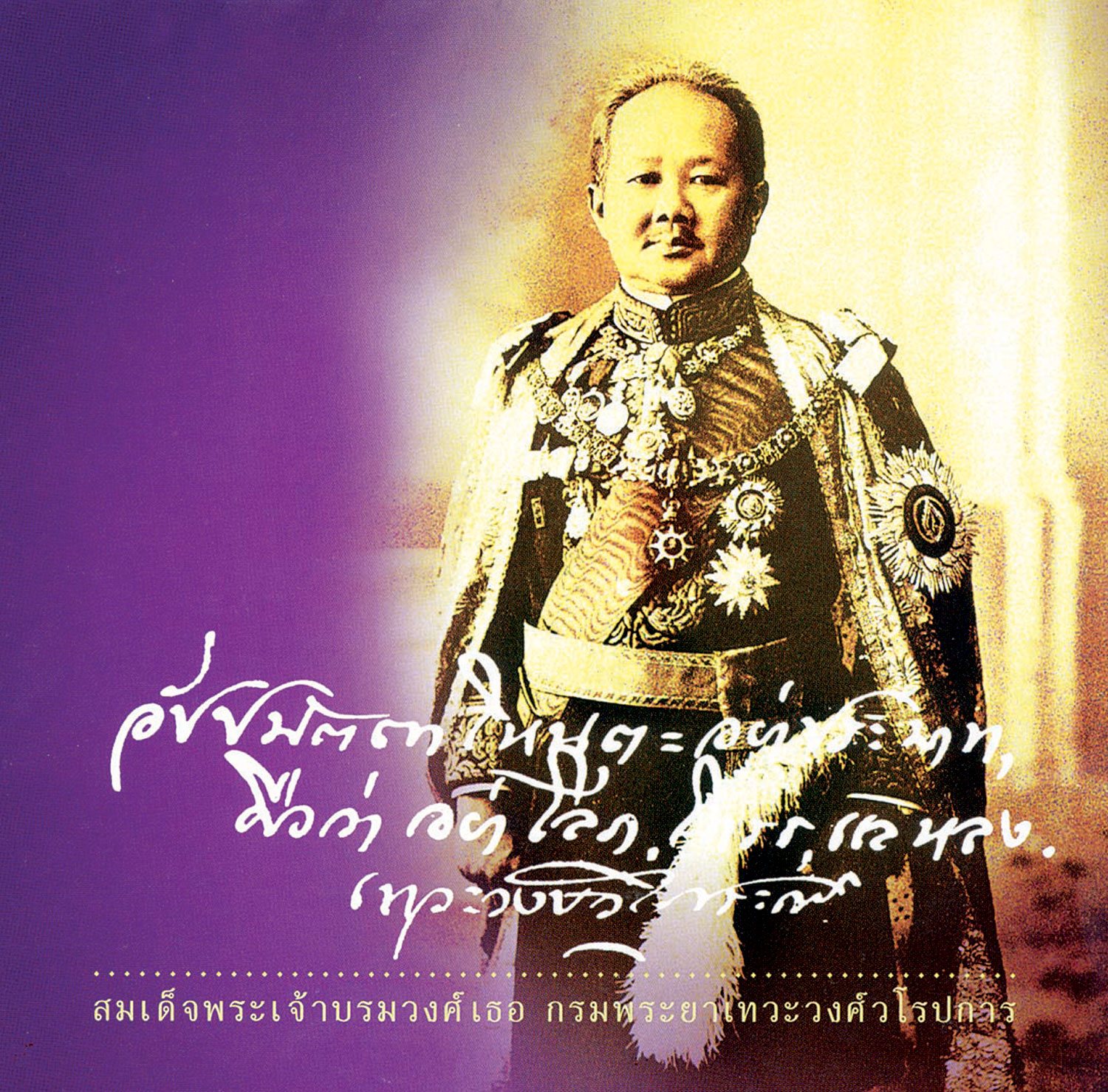 The palace was the residence of Prince Devawongse Varopakarn (1858-1923), the younger brother of King Rama V and the forefather of the Devakula royal family. The prince was a foreign minister during the reigns of King Rama V and VI. Thus he was known as the father of Thai foreign affairs.

His palace was built in 1916 near the command of King Rama VI. Designed by British architect Edward Healey, the three-storey, vanilla-coloured Devavesm Palace was completed in 1918.

The palace consists of four buildings. The main mansion, or Tamnak Yai, stands handsomely in its neoclassical architecture design and is decorated with Greek and Roman ornaments. The other three buildings are the boathouse, Mom Lamai Residence and Mom Chan Residence. The prince resided in the mansion for five years before he died in 1923.

In 1950, the government converted the palace and nearby buildings into the Public Health Ministry. In 1985, the buildings became the office of the Bank of Thailand.

In 2003, the central bank worked with the Fine Arts Department to restore the palace. The ground floor of the main mansion used to be a museum to exhibit the restoration process of the palace and the story of the prince and his personal collections, including a marble bust of the prince carved by Swiss sculptor Robert Wening, a diamond brooch bearing the King Rama VI insignia given to the prince by the king, a belt, a pocket watch and a ring with his insignia.

All the exhibited items are displayed in the nearby Learning Centre of the Bank of Thailand. However, during the Covid-19 pandemic, the service is closed to the public.

The effort of the central bank to preserve the early 20th-century buildings was regarded as a model for the conservation of historical sites in Thailand and the region.

THE PALACE OF KING TAKSIN

Located on the banks of Chao Phraya on the Thon Buri side and in the compound of the Royal Thai Navy headquarters, the royal palace of King Taksin the Great, better known as Phra Ratchawang Doem, won the Award of Merit in 2004. 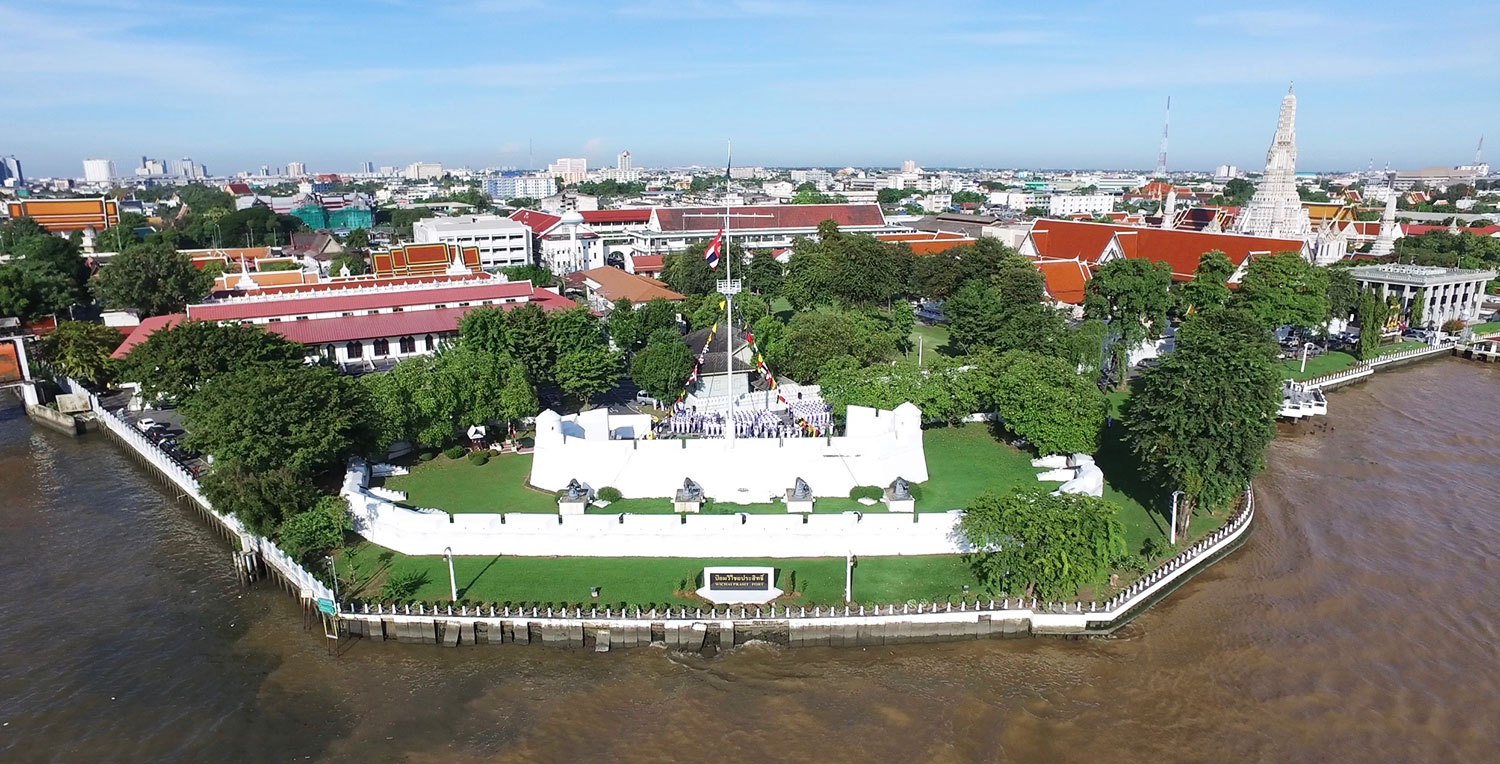 The palace is located in a strategic location. (Photo courtesy of The Royal Thai Navy) 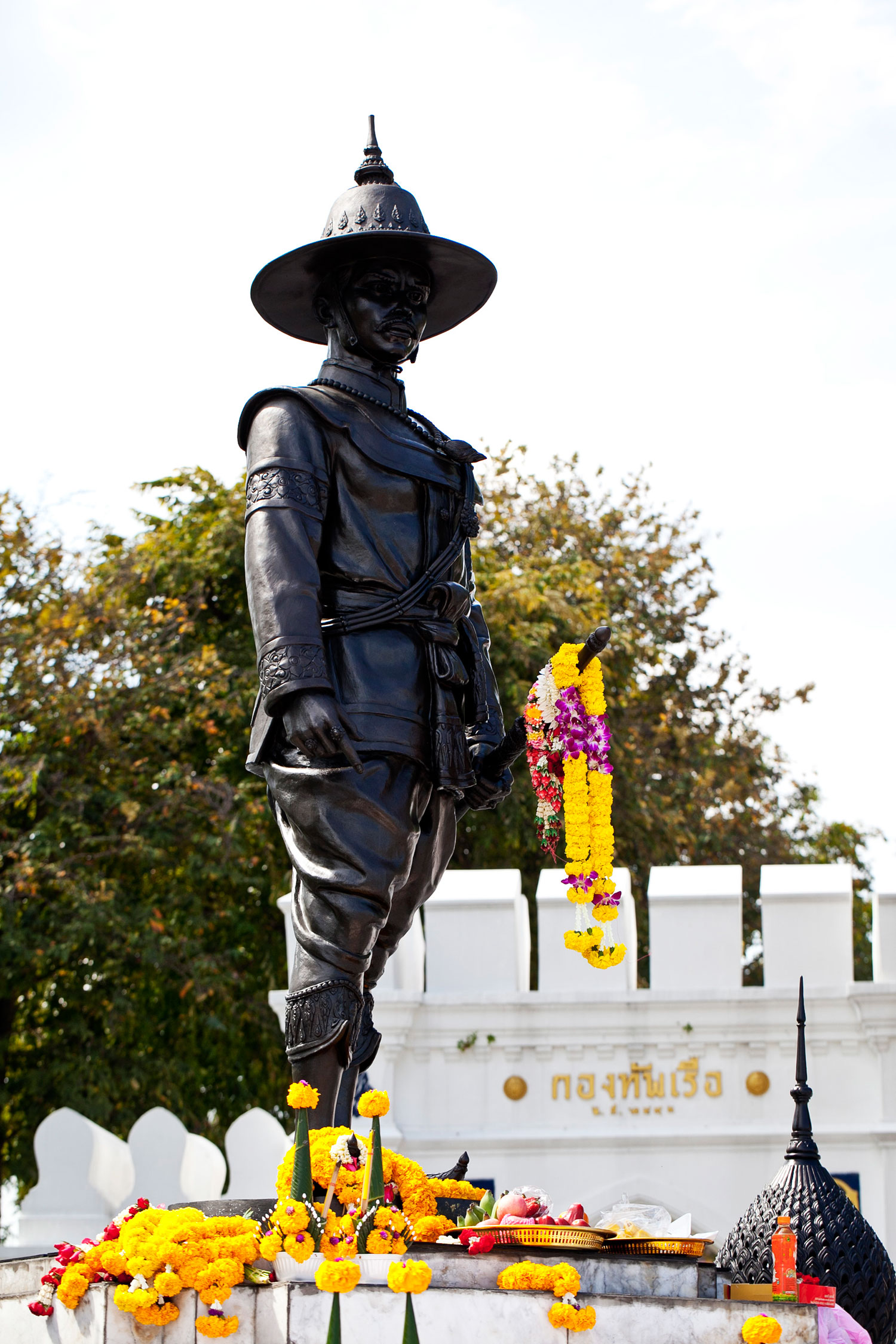 The king named Thon Buri, a fort town during the Ayutthaya period, as the capital of Siam during his reign (1767-1782). His palace was built on a strategic location to look out over the surroundings, including possible waterborne attacks.

But when the Thon Buri era ended, King Rama I of the present Chakri Dynasty founded his new royal palace on the east bank of the Chao Phraya River. The old palace of King Taksin became a residence for members of the royal family. Some kings were born in Thon Buri Palace, including Rama III, Rama IV and King Pinklao, who was the second son of Rama IV.

The old palace became the Naval Academy during the reign of Rama V when he established the Royal Thai Navy. The king also ordered that the old palace must not be demolished or damaged. During the reign of Rama IX, the palace underwent a big renovation. The 160 million baht project was kicked off in 1995 and completed in 2002. Phra Ratchawang Doem was converted into a museum and managed by the Royal Thai Navy. 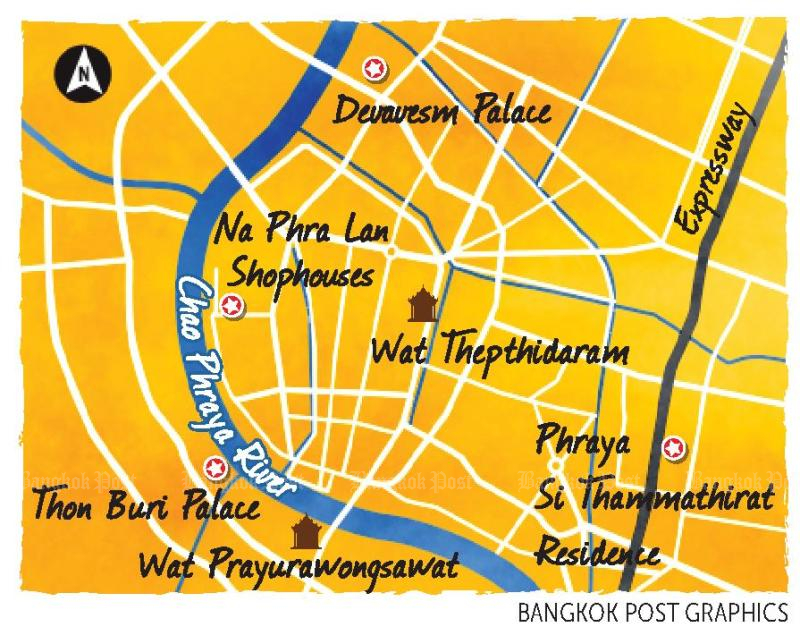 2009:
- The Samchuk Community and old market district in Suphan Buri (Award of Merit)