Phak Hai's attraction lies in its originality and well-preserved identity

published : 19 Aug 2021 at 04:00
newspaper section: Life
writer: Karnjana Karnjanatawe
Phak Hai’s land is fertile but most farmers grow rice once a year because the area is used as a water-retention zone to prevent Bangkok from being flooded.

Going out to an open green space somehow can change my perspective and mood. When I hear birds chirping and feel the gentle wind, it relaxes me and helps reduce stress after days working in front of a computer screen.

Last Friday, I shut off my notebook and social media apps to venture out. I picked Phak Hai district in Ayutthaya as my destination. It is a low-profile and quiet town. I was certain that I would not come across many people, especially when the well-known Lat Chado weekend market is closed during the pandemic.

From the northern part of Bangkok, I drove on the four-lane Road 347 passing the Bang Sai district of Ayutthaya and turned to Road 3263 and 3454 for a pleasant view of rice fields and canals. 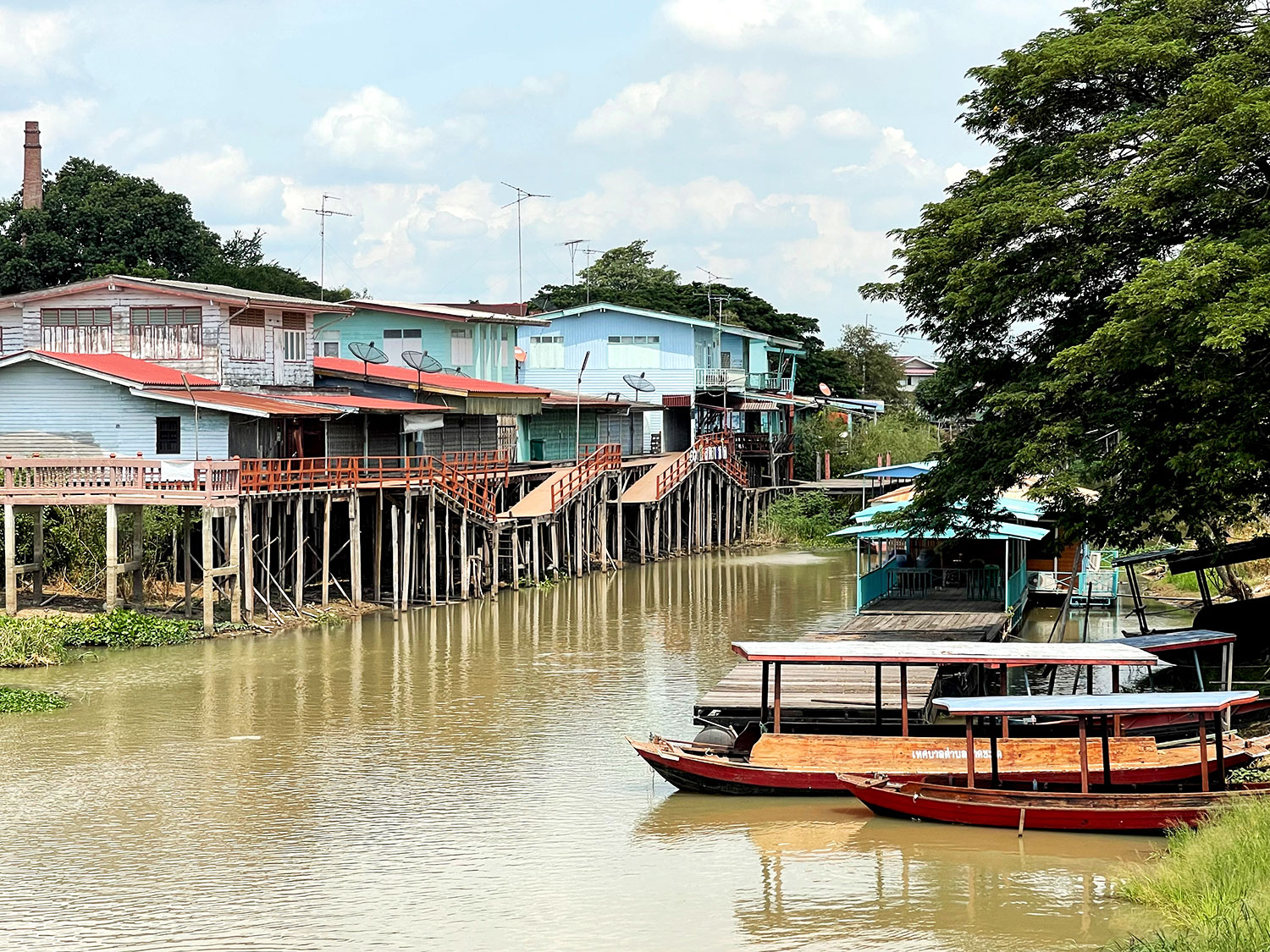 Wooden houses were built on tall stilts along the banks of the Lat Chado canal to avoid flooding during the rainy season. 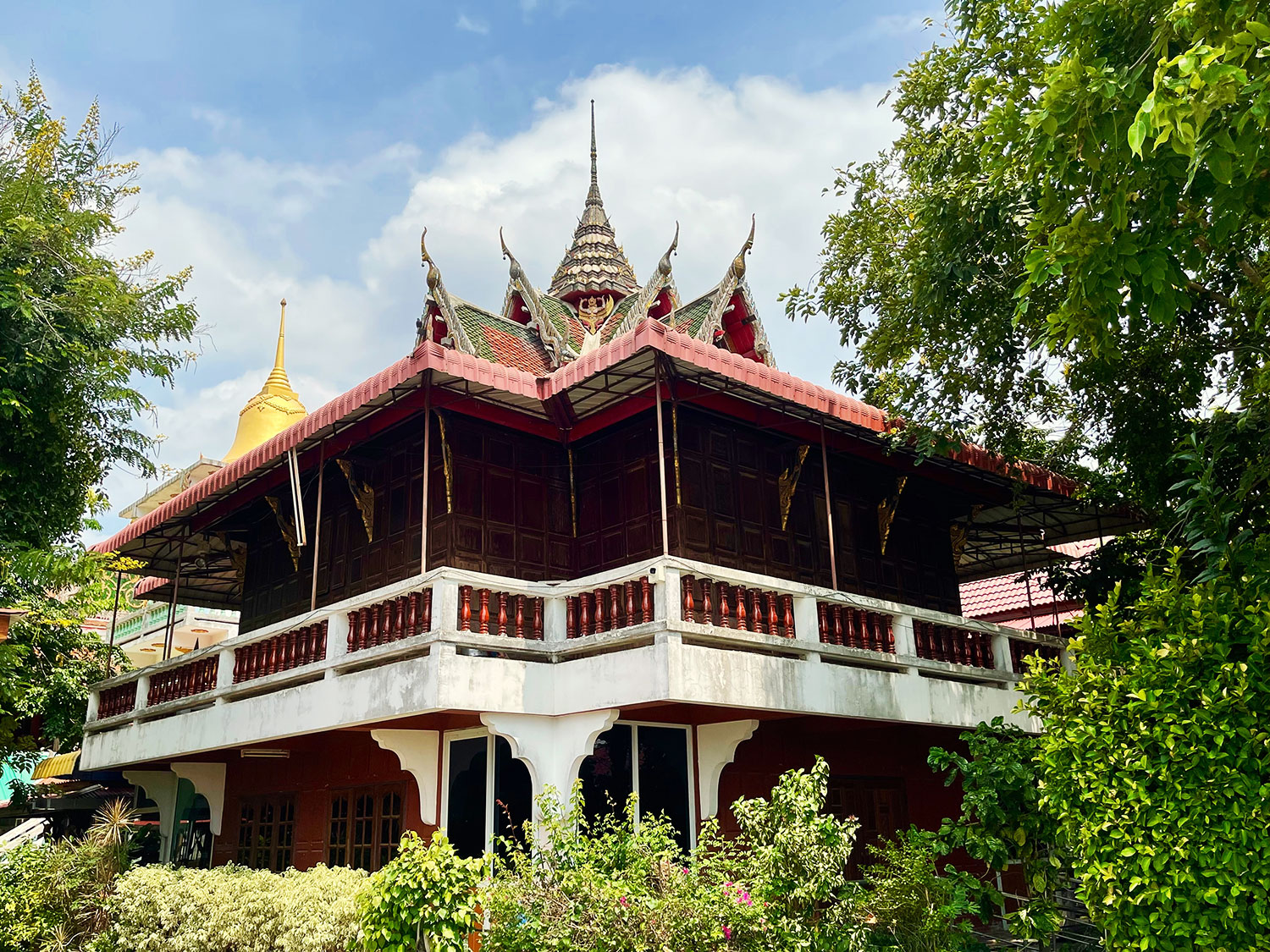 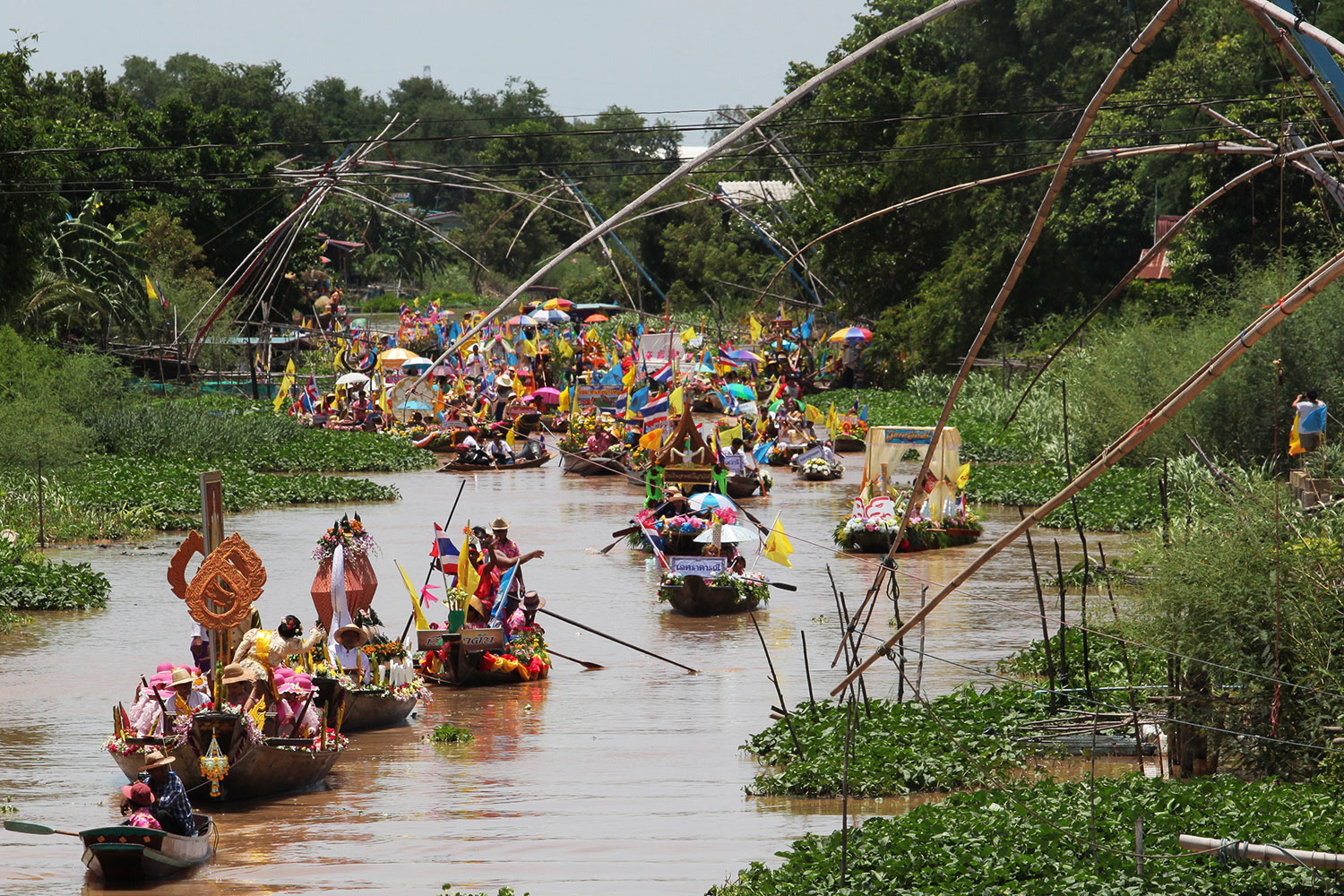 Locals believe that the name of the town was taken from a bitter cucumber (mara khi nok or phak hai in a local dialect) that widely grew in the area. Located on the Noi river basin, the land is fertile so most people grow rice for their living. Since the area is low land, it is regularly flooded during the rainy season. Thus locals built their houses on stilts along the river to prevent their homes from flooding.

Before the pandemic, some restaurants and hotels along the Noi River offered boat cruises for visitors to see the old ambience of the town, wooden houses and a way of life along the waterway. The service is now suspended.

After hitting the town, I drove directly to the Lat Chado community. It was a return trip after my first visit in 2009. The community has not changed much. Two-storey wooden shophouses with folding doors were still in good condition although most of the houses remained closed. Wooden walkways, boardwalks and wooden bridges crossing the Lat Chado canal still existed. But some wooden planks of the bridges and walkways were broken and needed maintenance.

Lat Chado is an old community founded after the fall of the Ayutthaya Kingdom in 1767. People fled the old capital and relocated along the canal, about 40km northwest of the old city. According to Lat Chado Municipality, the waterfront community was once known as Chakrarat before being renamed to the present Lat Chado due to the abundant chado fish or giant snakehead fish. It is a native fish of Southeast Asia and can grow up to 1m long and 20kg in weight. (Meanwhile, the word lat means slope or the land that is gradually spreading to a lower area.) 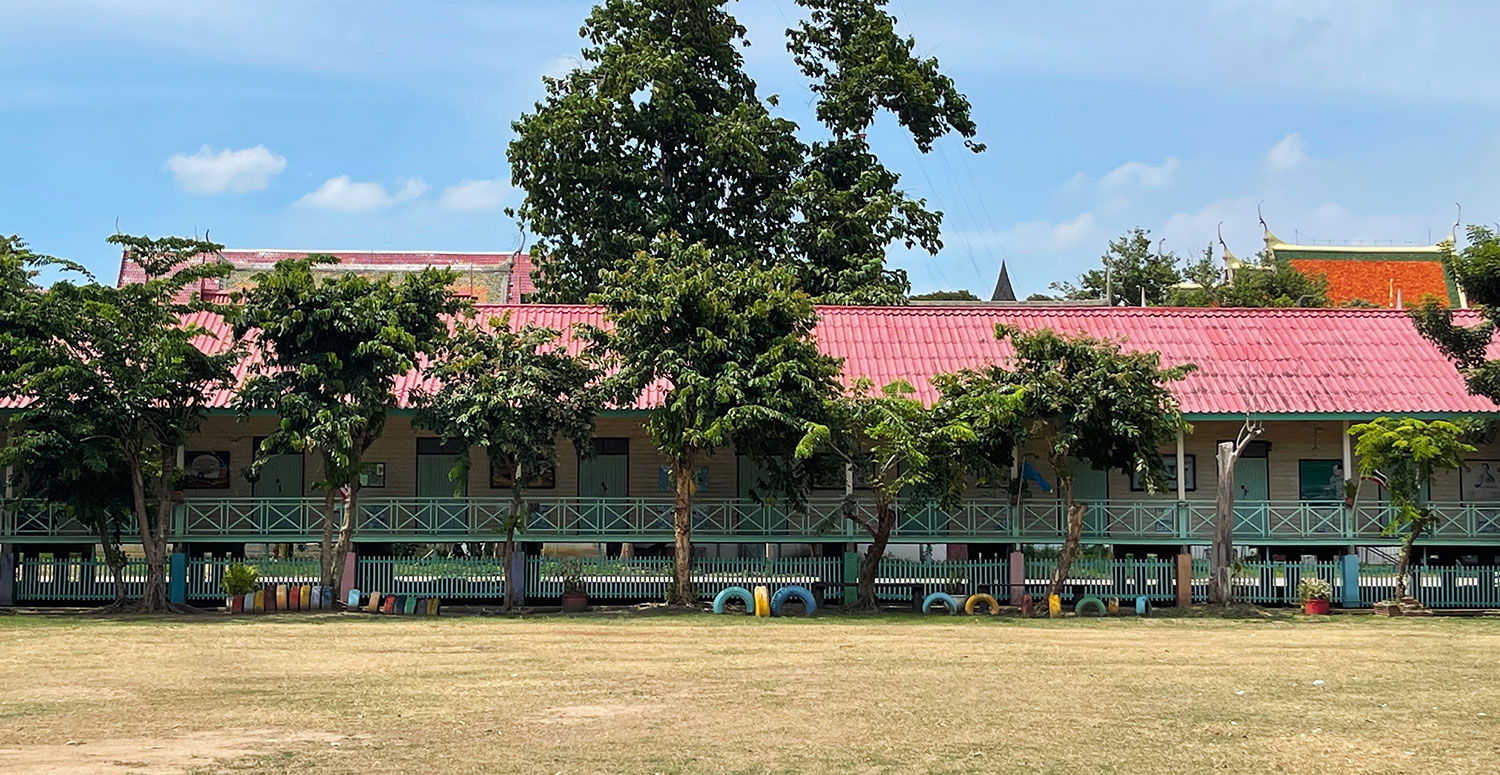 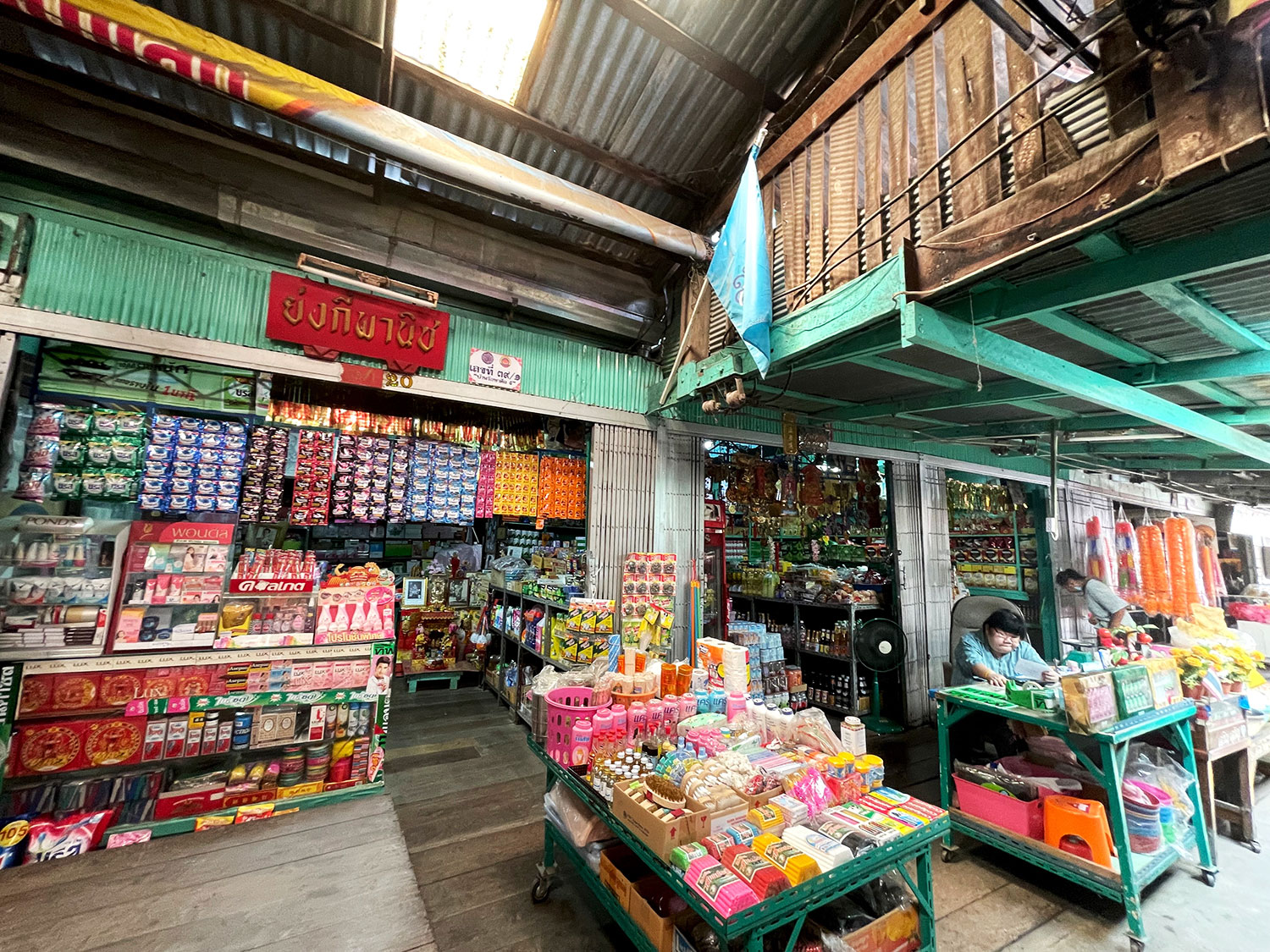 Yong Ki Panich is the name of this shophouse. It sells a variety of items, similar to a 7-Eleven convenience store in the community. 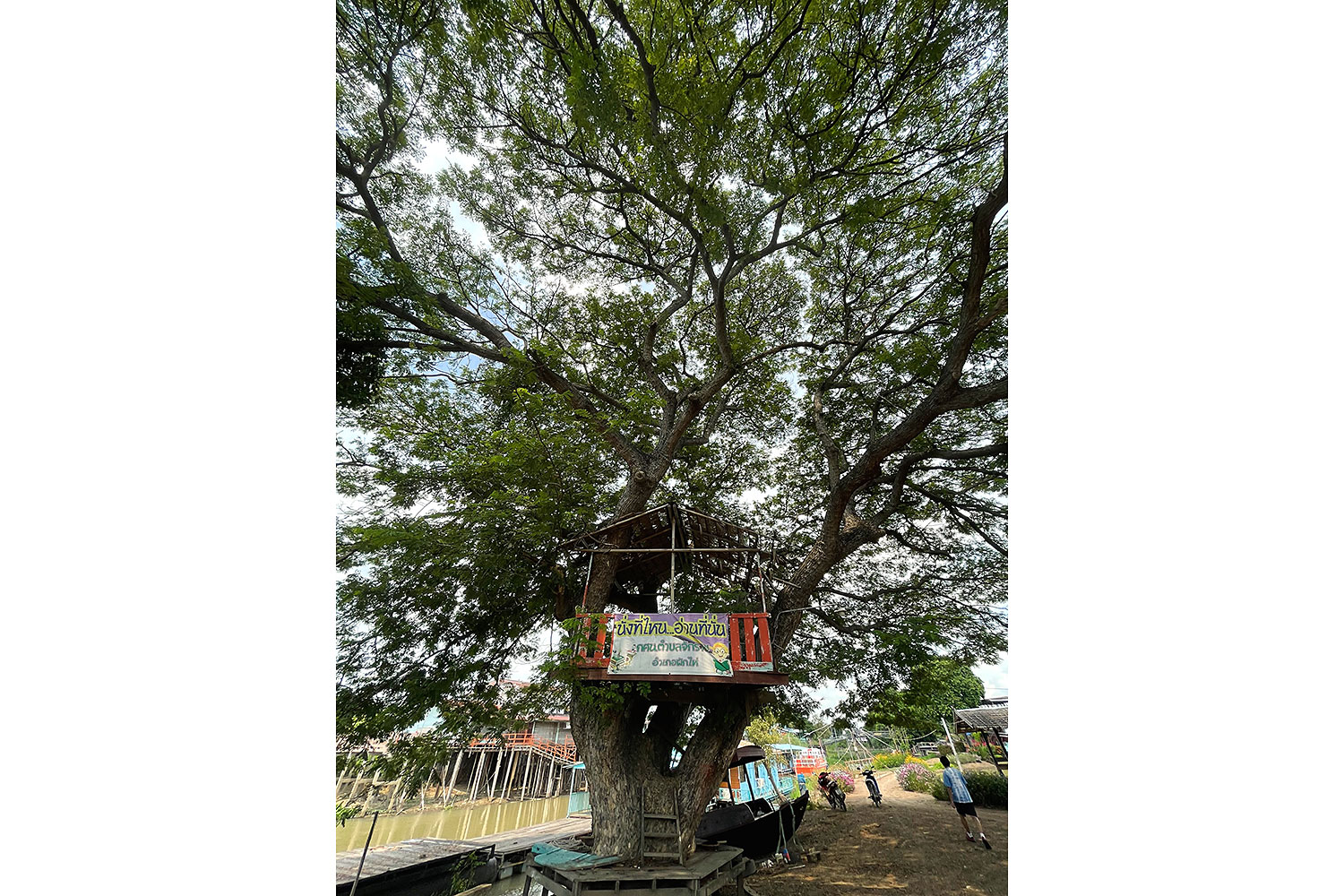 A wooden structure on a big tree was built as a reading area. The structure is damaged and needs maintenance. 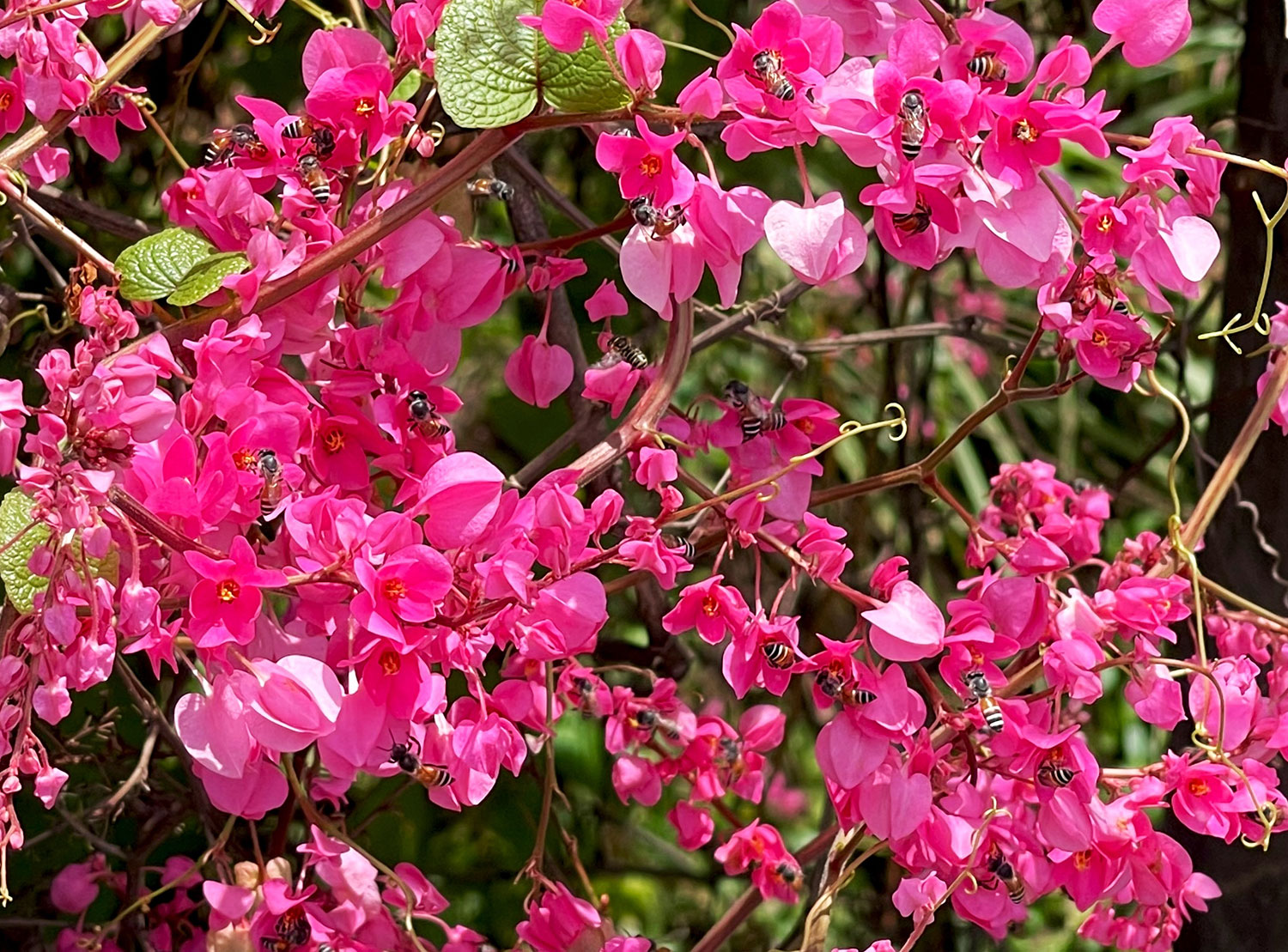 The blooming Mexican creeper attracts swarms of bees. The flower is known as dok phuang chompu in Thai.

Locals recalled that years ago when they paddled their boats along the canal, there was a high chance they could accidentally hit fish swimming in the river. Another story was that fish were so plentiful that when people wanted to catch giant river prawns, they had to get through a school of the fish. During my visit, I spotted some big fish in the canal.

The Lat Chado community has several waterways connected to the Tha Chin River in the nearby Suphan Buri province to the west and the Noi and Chao Phraya rivers to the east. In the past century, the canalside community was a well-known floating market where locals paddled their boats to sell farm produce.

The community had a market that was busy from dawn until dusk. In addition, the community served as a centre of transportation. Plenty of boats offered services to near and far places connecting commuters to neighbouring provinces such as Ang Thong, Suphan Buri or even Bangkok.

But when roads were built around the 1980s, the main mode of transportation shifted from boats to cars. The glory days of the market soon became history. No one wanted to commute by boat anymore. People gradually left their homes to search for better opportunities in the cities. The canalside community was quiet after many shophouses closed.

If you like traditional Thai desserts, you may want to drop by Kanom Thai Kai Whan shop in Phak Hai. Prasert Chanyachat or Acharn Phueak inherited dessert-making skills from his mother but he reduces the level of sweetness by 30%. He also has a unique product — a bitter gourd jam that he mixes with several fruits to make the sweet and sour jam. During the pandemic, the shop is open for customers by appointment only. For more details, visit the Facebook page at bit.ly/3iTRsdW or call 081-398-7643. (Photos: Prasert Chanyachat)

Despite the setback, some locals, especially the elderly, refused to move out. They kept their houses open and sold things to people in their community. The retro ambience somehow attracted those who look for the good old days, especially filmmakers.

The attempt by the locals to preserve their shophouses also got recognition by the Association of Siamese Architects. In 2006, it was awarded the Best Architectural Conservation Award to the community.

In 2008, the Lat Chado Municipality joined hands with Ayutthaya Province and the Tourism Authority of Thailand to revive the old market to attract tourists. They encouraged old people to open their houses to sell food and snacks to visitors. Local authorities also refurbished the market zone and opened it as a weekend destination. It also renovated some shophouses to be a mini theatre and a local museum exhibiting fishing tools and old pictures of the Lat Chado community.

In 2010, the municipality brought back the traditional candle-carrying boat procession along the Lat Chado canal for the annual Buddhist Lent Day or Wan Khao Phansa. It was a successful ceremony that drew thousands of visitors yearly. To join the procession, villagers decorated their boats beautifully with flowers and flags. Each vessel carried offerings including candles and saffron robes for monks to use during the three-month period.

Before the pandemic, those who visited the Lat Chado market could take a boat cruise along the canal. The service is currently suspended while the market remains closed. 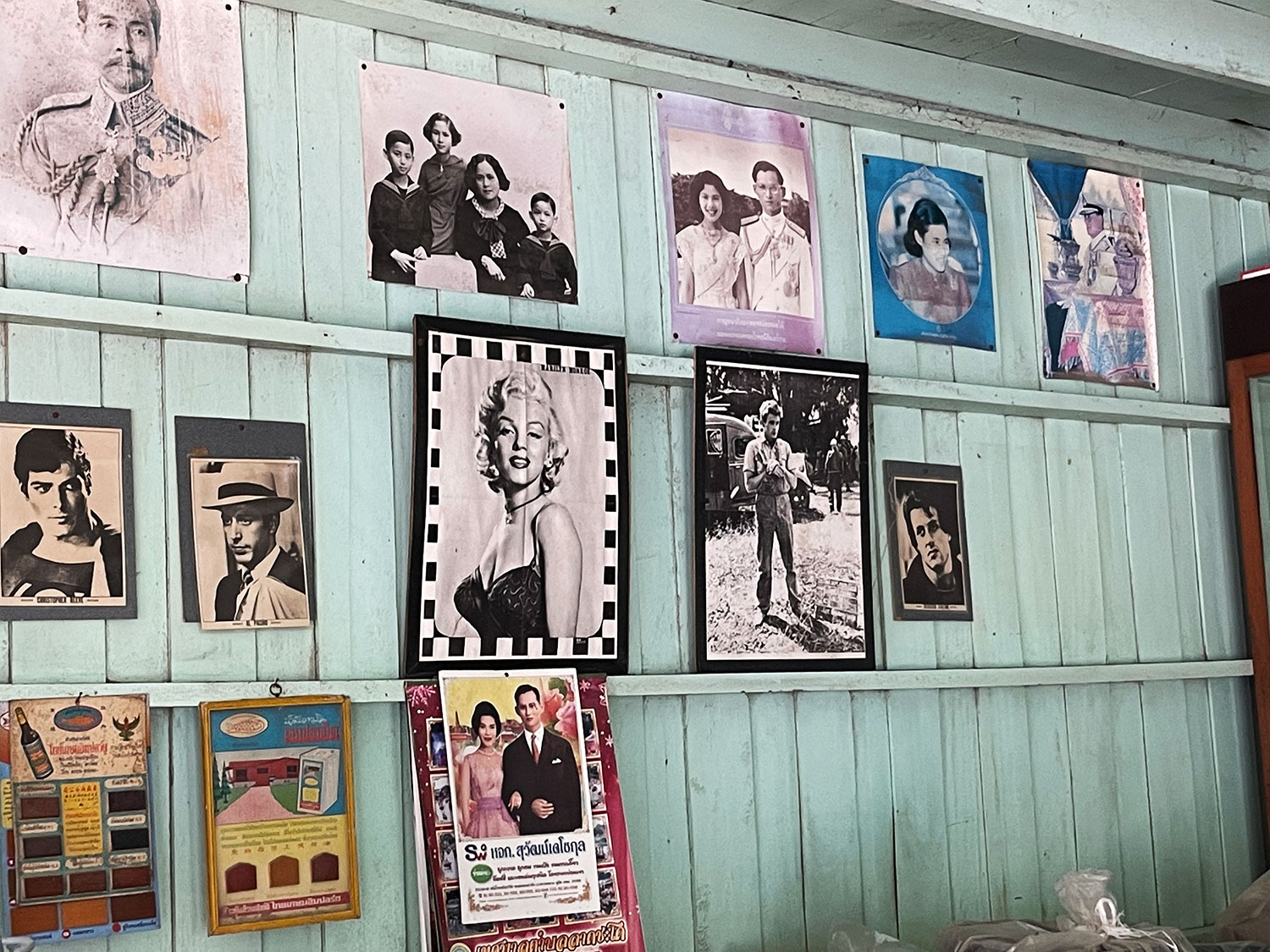 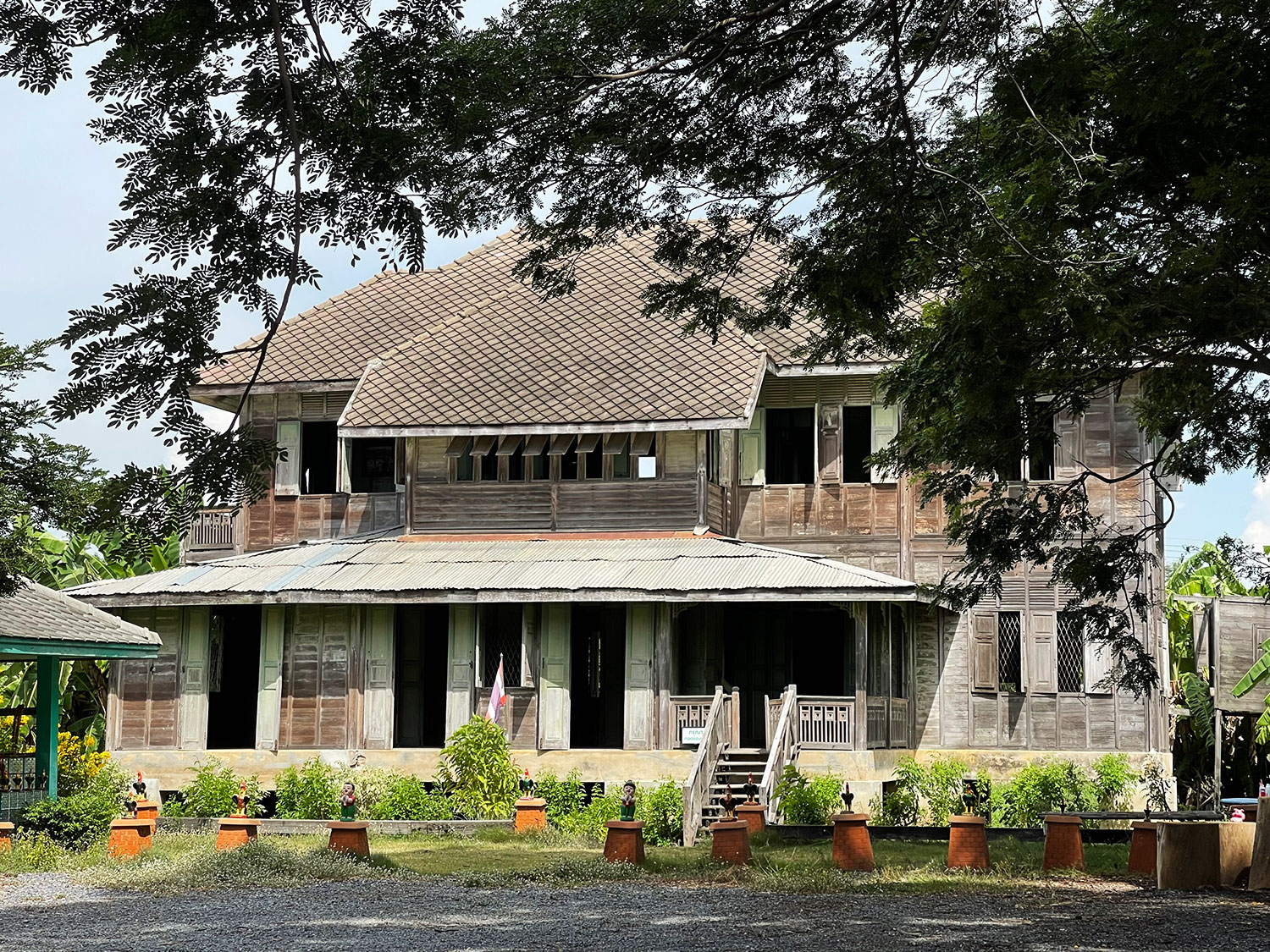 The mansion of Ban Khun Phitak Borihan is open for public visit. 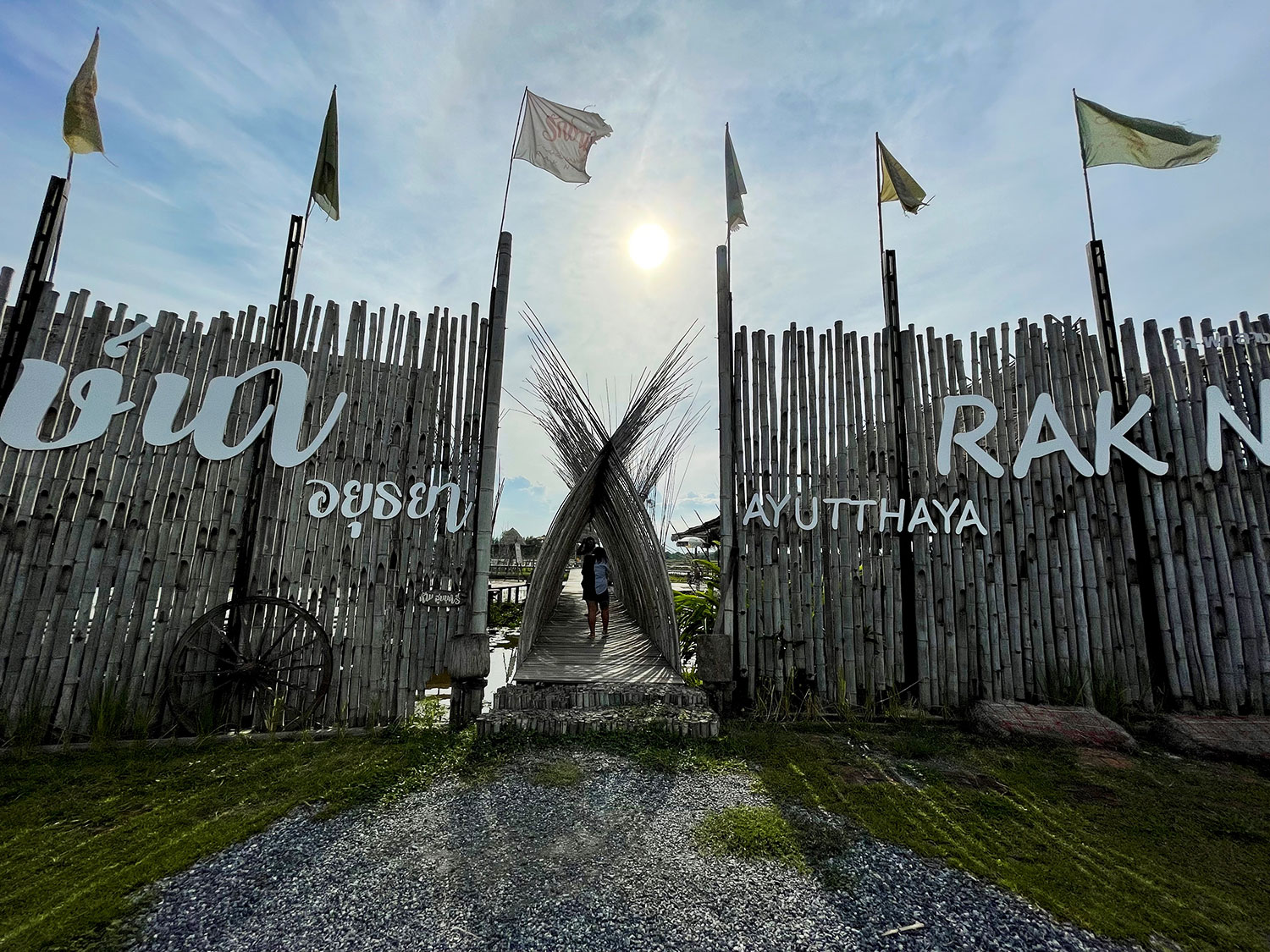 Rak Na Cafe is located along Road 347 in Ayutthaya. It can be a quick stop for buying a lunch pack or a cup of coffee. The cafe has a raised wooden platform built over a rice field. But the rice has been harvested and the field are being prepared for ploughing. 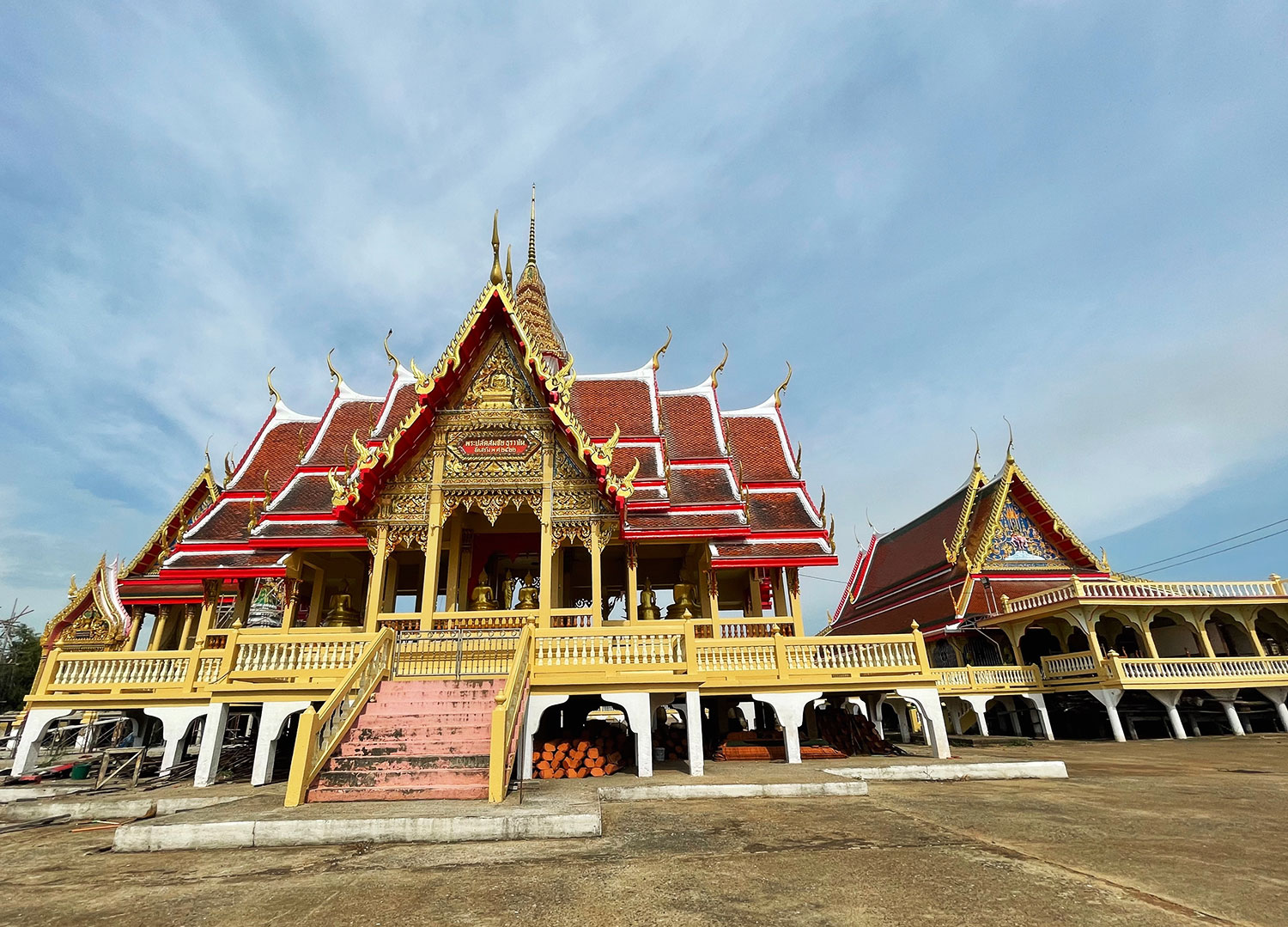 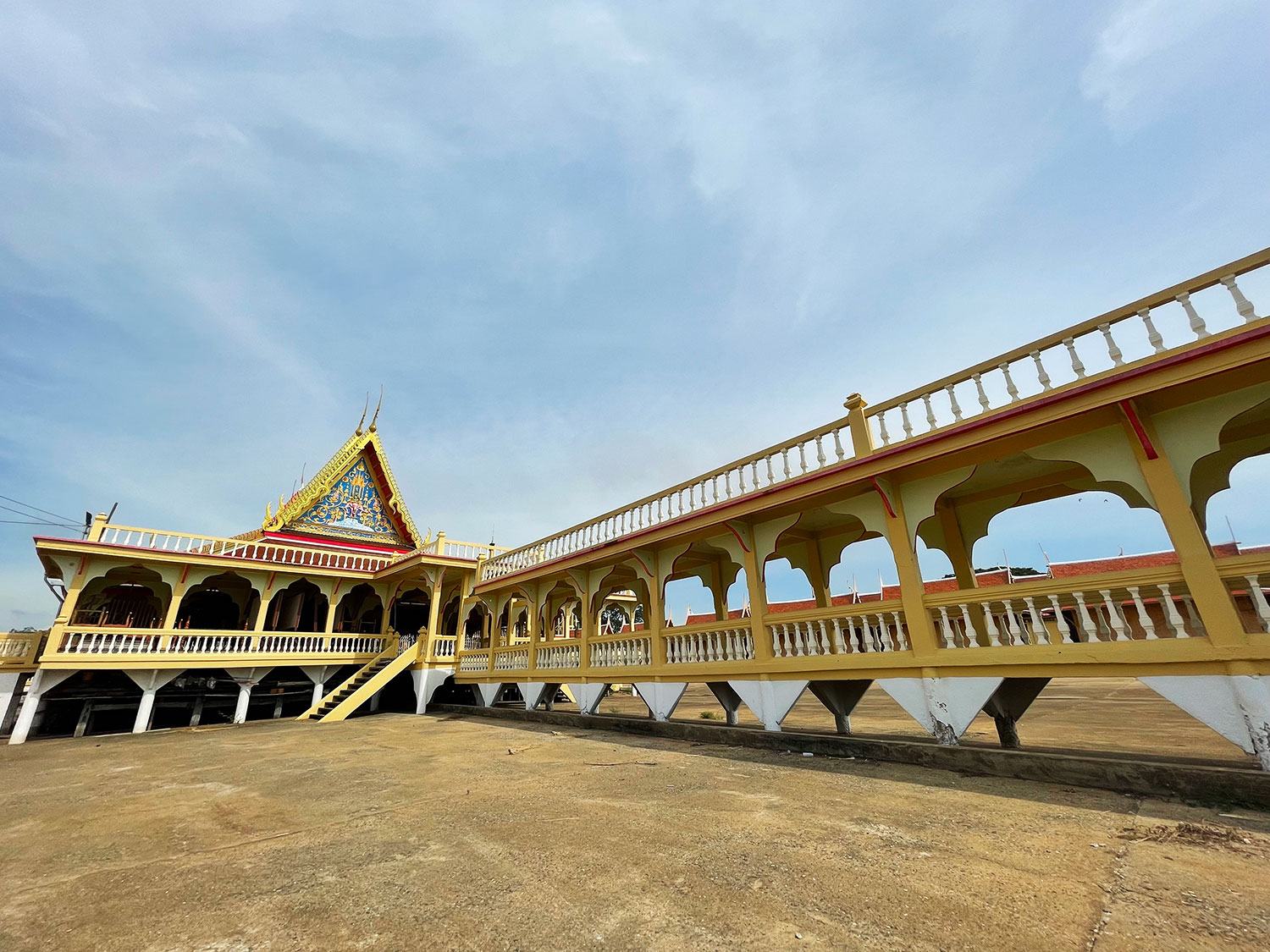 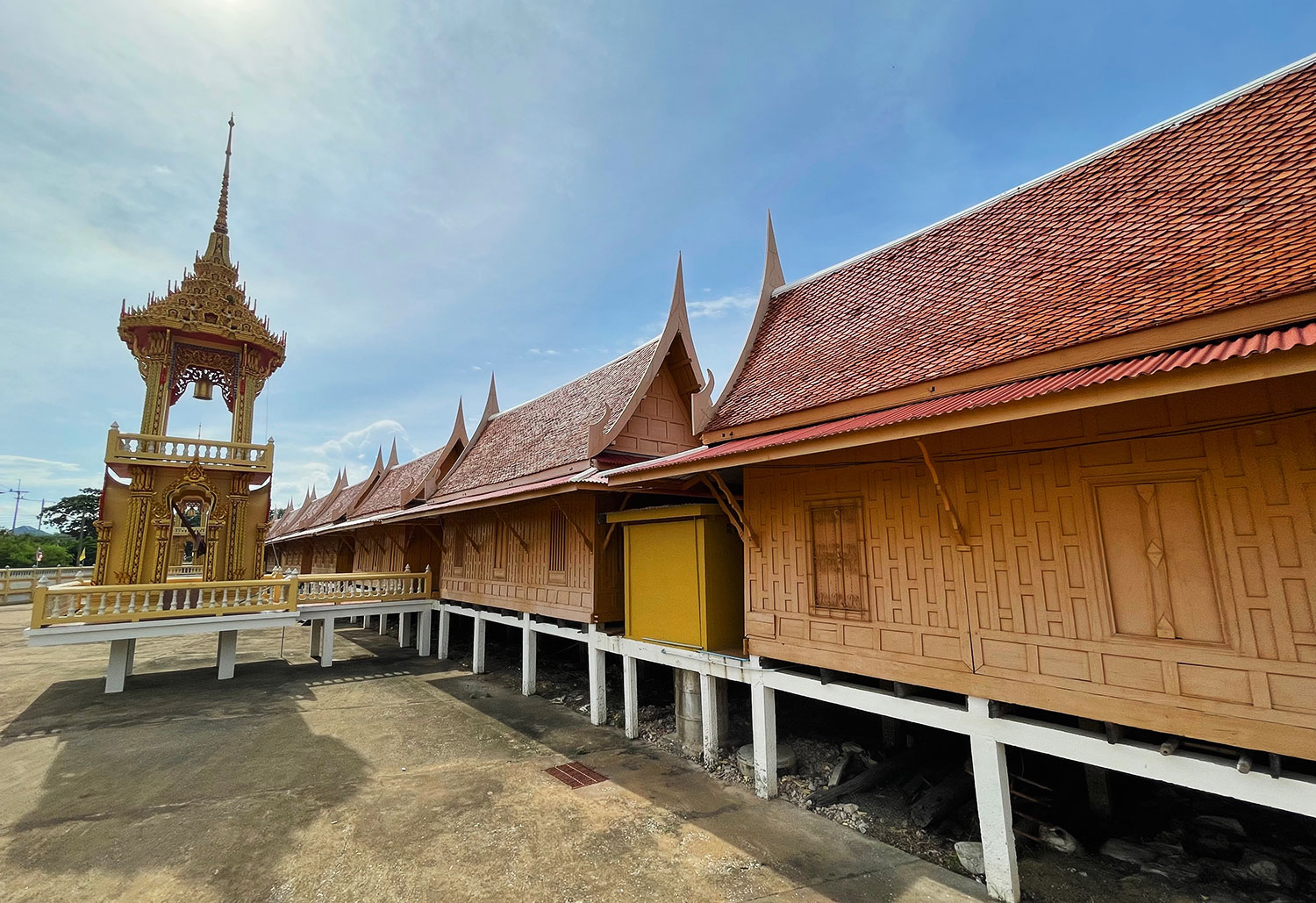 Located next to the market is Wat Lat Chado school. Built in 1960, this primary school is known for its classic wooden structure that may remind those in their 60s of their old primary schools. The school is promoted as having the country's longest wooden walkway. The school houses an open-air museum exhibiting wooden boats. The vessels seemed to be abandoned at present.

The school shares the same fence with Wat Lat Chado. The temple was built during the Ayutthaya period. It was a centre of activities for communities to make merit or hold social events.

From the Lat Chado community, I stopped by the colonial-style mansion built during the reign of King Rama V, or more than 120 years ago. It was the home of Khun Phitak Borihan, the former district chief of Sena Yai (today known as Phak Hai district).

The two-storey mansion was built on a 1 rai site along the Noi River, about a 10-minute drive to the east of the Lat Chado community. It is also a historical place where King Rama V spent a night during a royal visit.

Khun Phitak painted his golden teak mansion green because he was born on a Wednesday. Locals then called the house Ban Khieo, meaning the green-colour house, until today.

He and his wife Jang Milinthawanit had six children. They later moved out and lived in Bangkok after their father passed away in 1933. His wife returned to the house from time to time. She decided to donate the mansion to the government as a national treasure. At present, the house is overseen by the Treasury Department.

Today the house is open as a museum. There is no entrance fee. Visitors can contribute to house conservation through a donation box.

I made my last stop at Wat Khok Thong, about a 10-minute drive to the south of the Green House. The temple is known as the most beautiful temple in Phak Hai. All structures of the temple were raised on pillars, preparing for flood during the rainy season. Today, the temple is surrounded by green rice fields and looks quite peaceful.

The attractions in Phak Hai district seem to be ordinary but its attraction lies in its originality and well-preserved identity. My one day trip was like a rural retreat and that is what I need from time to time.

P.S. Before travelling, make sure that you are vaccinated, keep your masks on and maintain a social distance while staying away from crowded places. 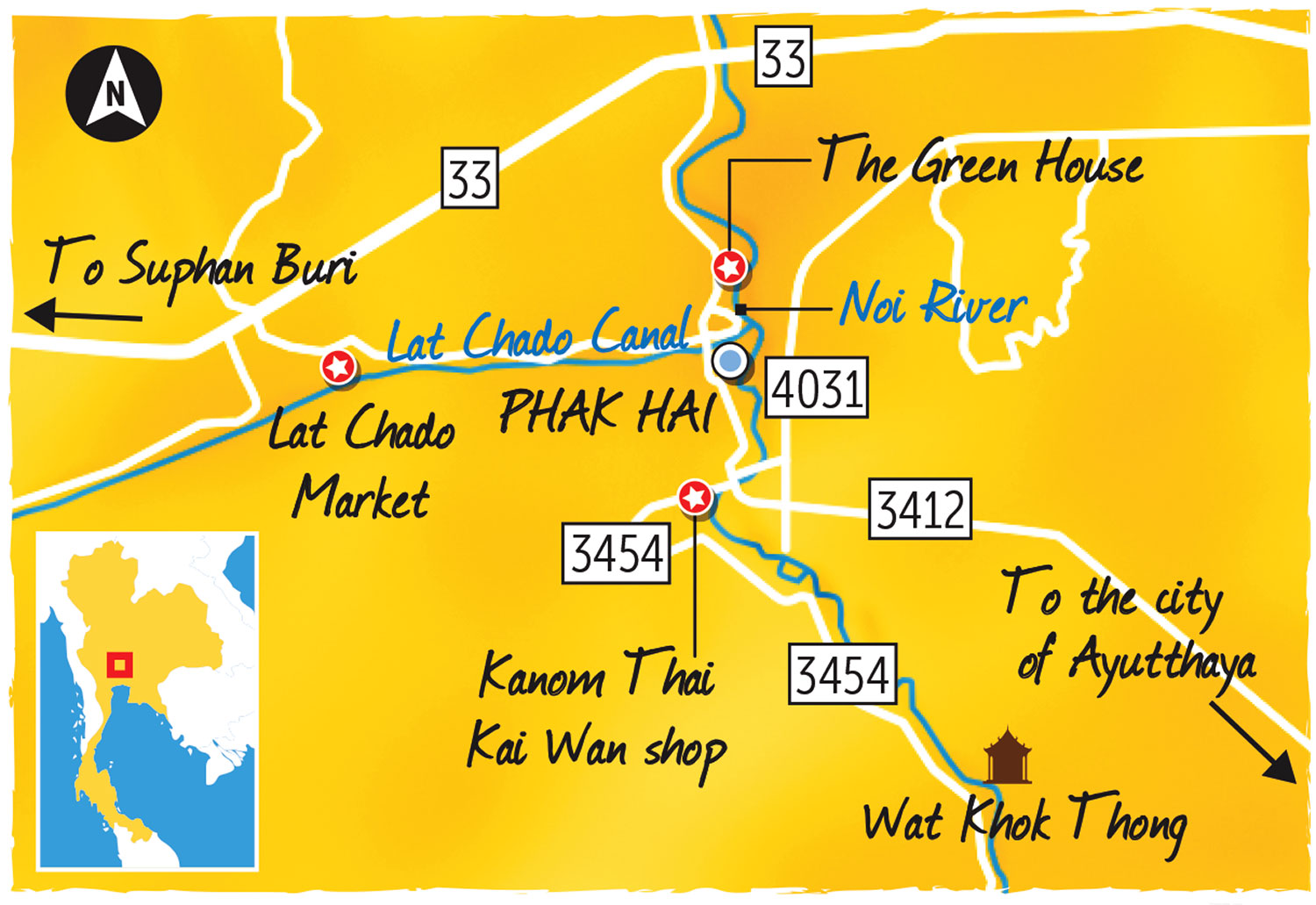