Visit the Land of the Rising Sun in Thailand

Thailand has reopened its borders to foreigners and the prospect of travelling abroad seems to be more of a reality now than it did a few months ago. It's not entirely back to normal though. There are hurdles to go through and it costs a lot of money if you want to go abroad and return to Thailand. That being said, unless you're unlike many of us and showed great self-control when it came to spending on food deliveries during lockdown, you've probably saved a fair bit to travel. A recent Visa survey revealed that the number one place Thais want to visit is Japan and if you can't get yourself there, Guru has the next best thing -- places in the Land of Smiles that transport you to the Land of the Rising Sun. 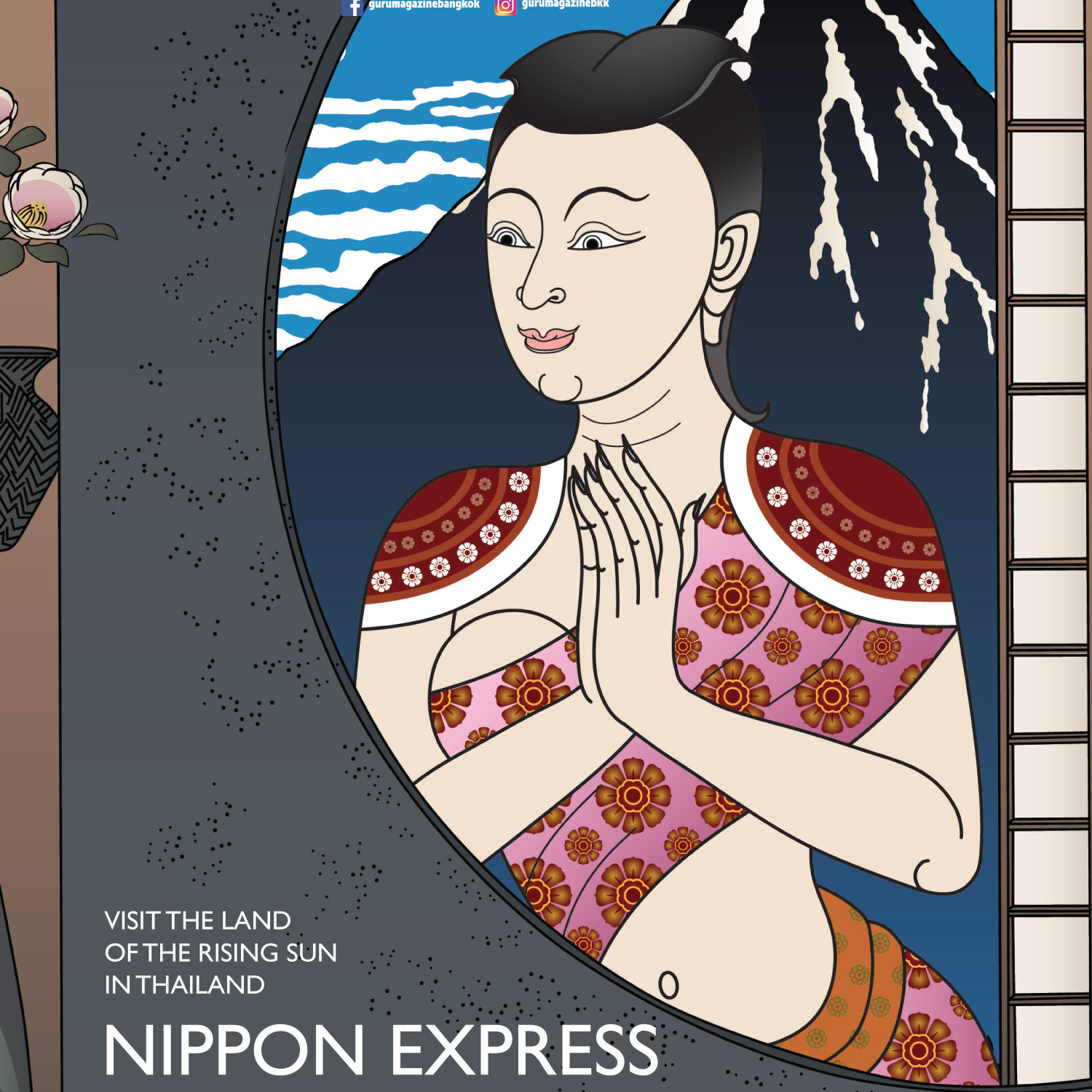 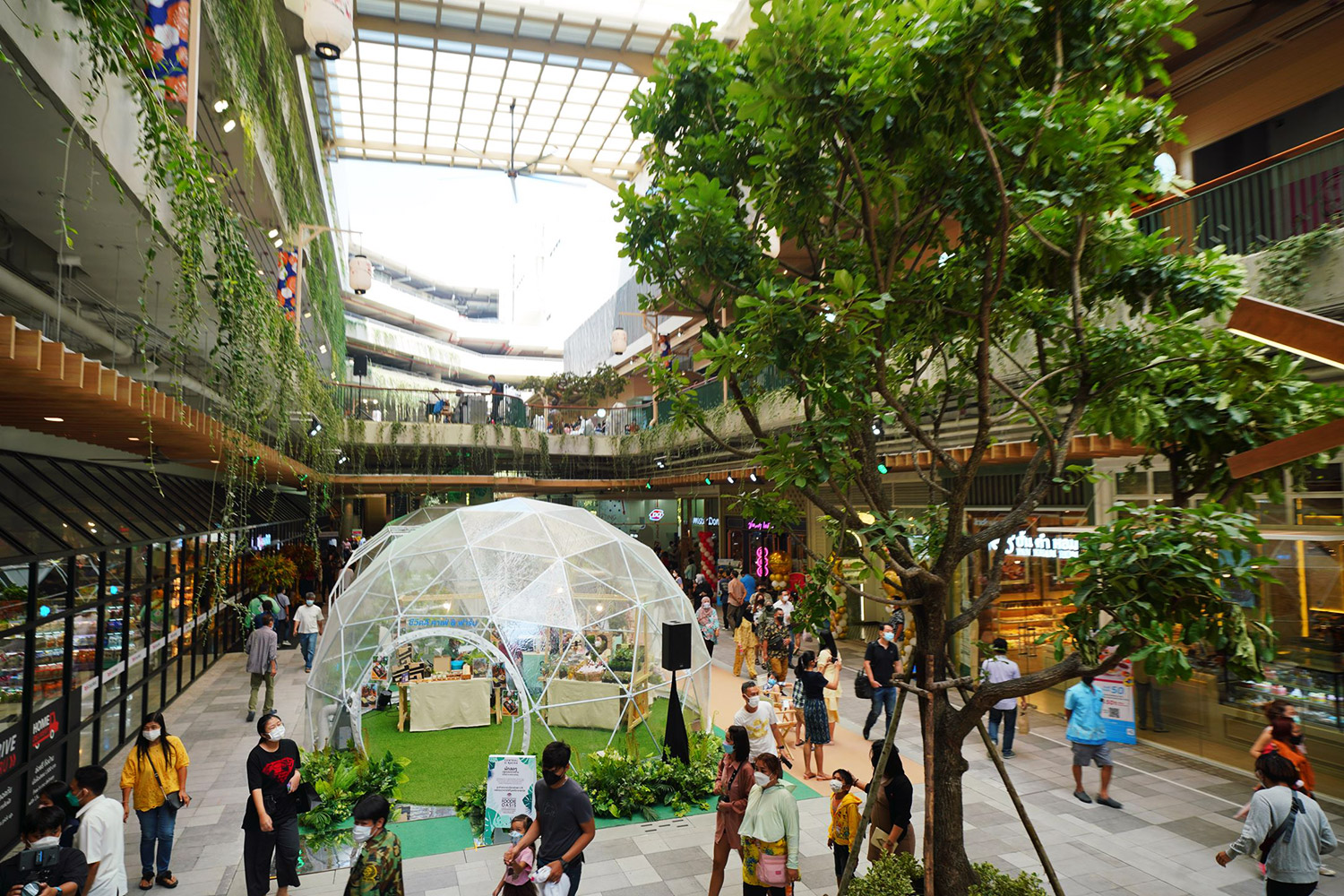 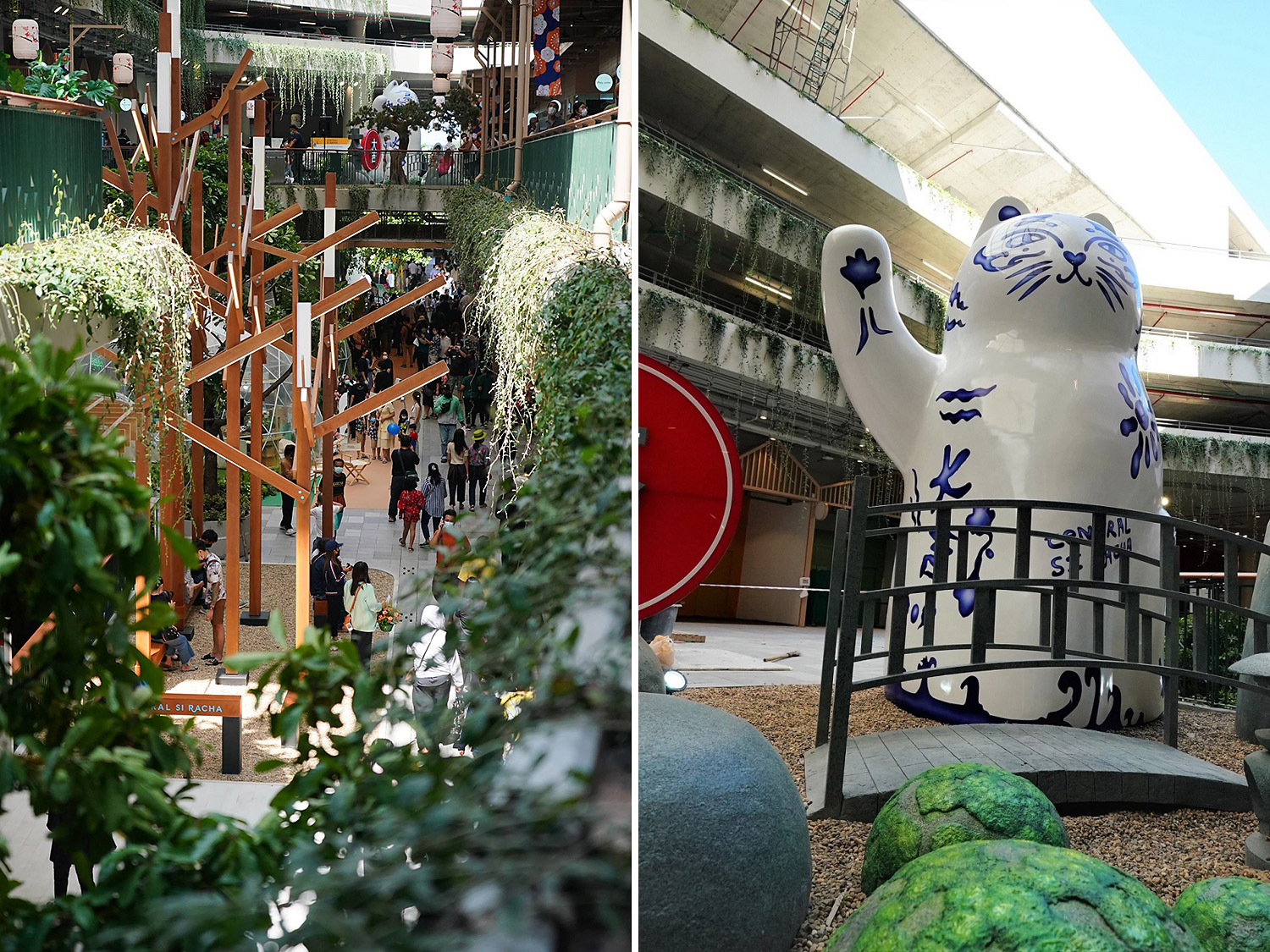 Central Si Racha is the latest addition to Central's already huge list of malls and has been touted as the first eco-friendly mall and the largest mixed-use development project in the East. Malls, of course, are nothing new to the Kingdom, but Central Si Racha doesn't just house shops, its aesthetic is inspired by Japan. The mall has a very open design accentuated with touches of wood, which are reminiscent of traditional Japanese houses. The major giveaways of Japanese influences are the lanterns, as well as the Tiger+Neko sculpture, which is a great photo spot for those looking for some content for the 'Gram. Aside from Japanese vibes, the mall has the usual trappings of restos and stores but also a co-working space for those looking for a spot conducive to getting things done. You can take photos for your socials after you're done working. Hey, it's not all work and no play. 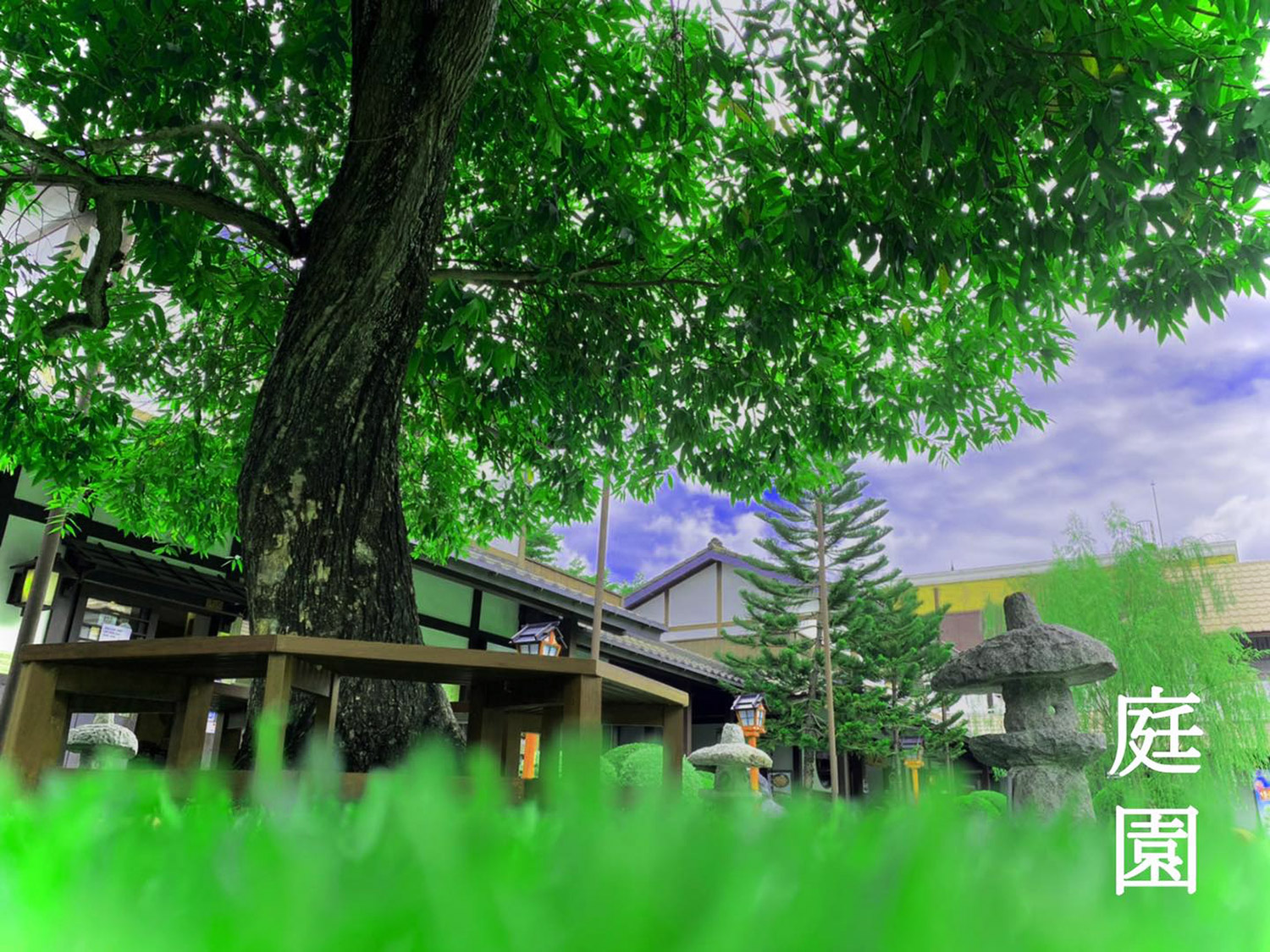 Another Japanese-style mall in Si Racha (maybe Si Racha is fast becoming the first Japanese prefecture out of Japan), J-Park Sriracha Nihon Mura is designed to look very Japanese. But unlike the more subtle Japanese aesthetics of Central Si Racha, J-Park leans heavily into it. The architecture hearkens to sprawling traditional Japanese castles complete with koi ponds and lanterns hung about. There's a red bridge, big red torii gates along with a large, yellow structure that looks like a temple though it probably houses a Subway or a milk tea shop. Aside from the many spots you can take advantage of for photos, J-Park is an actual mall, which means you can shop, eat and take photos in turn. 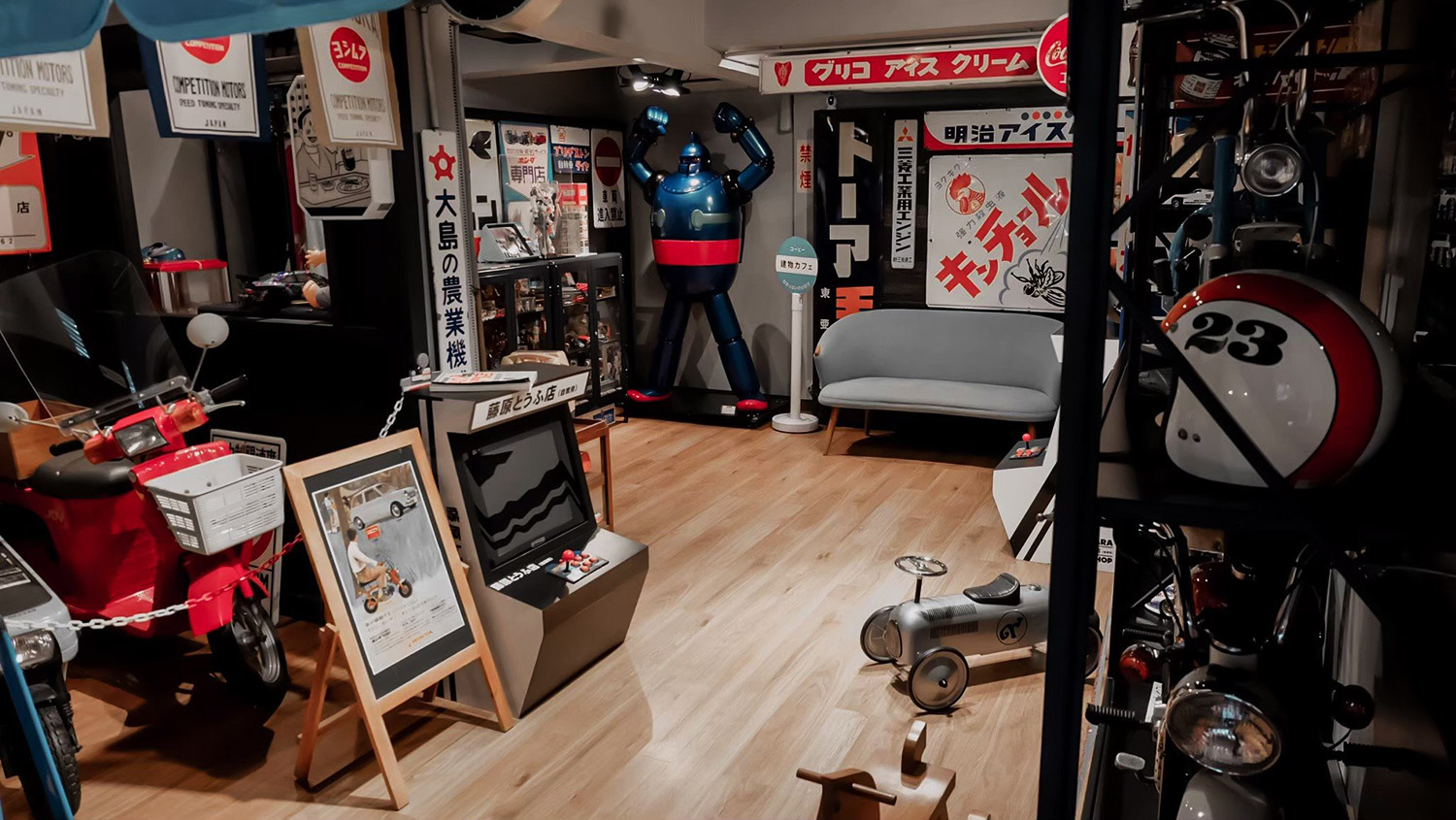 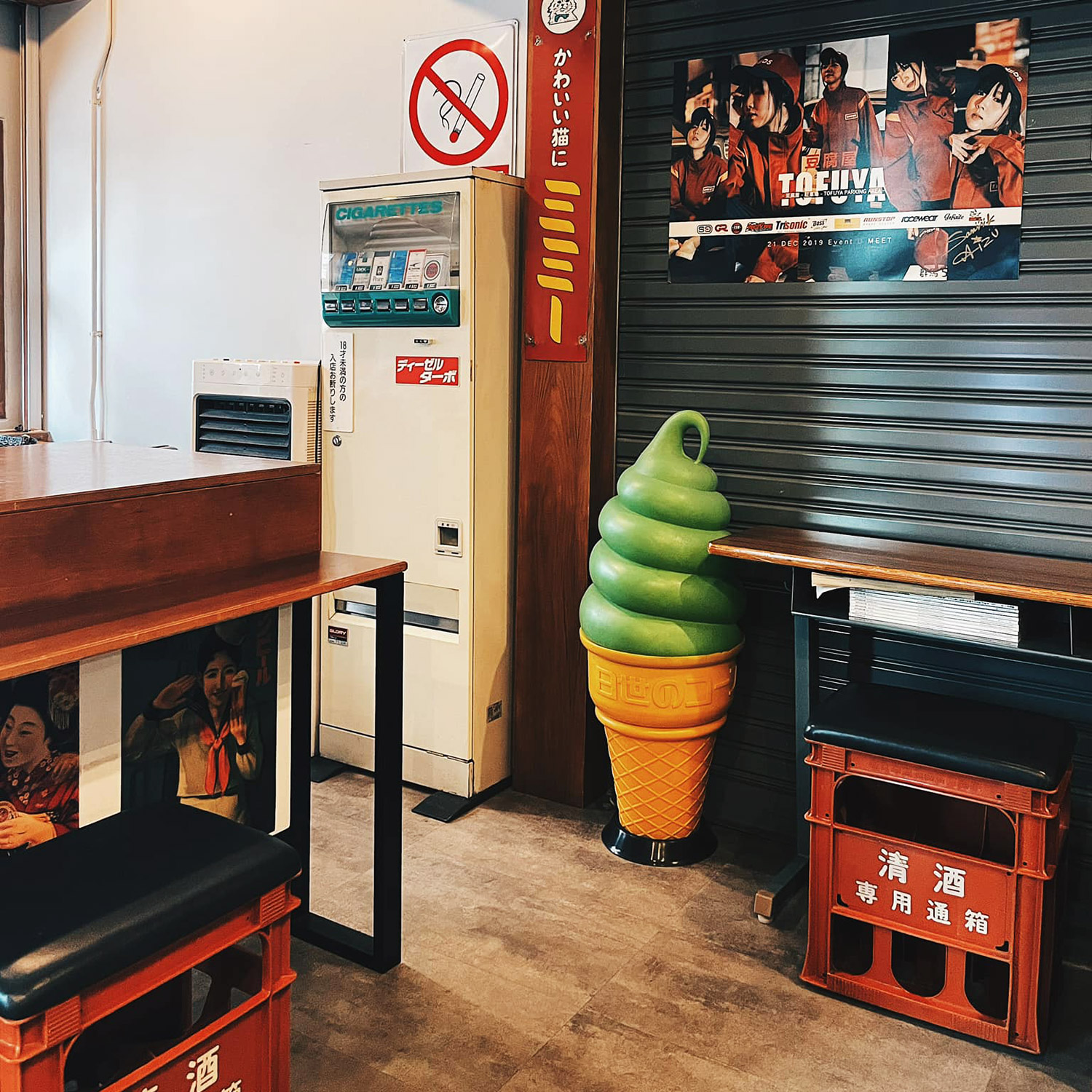 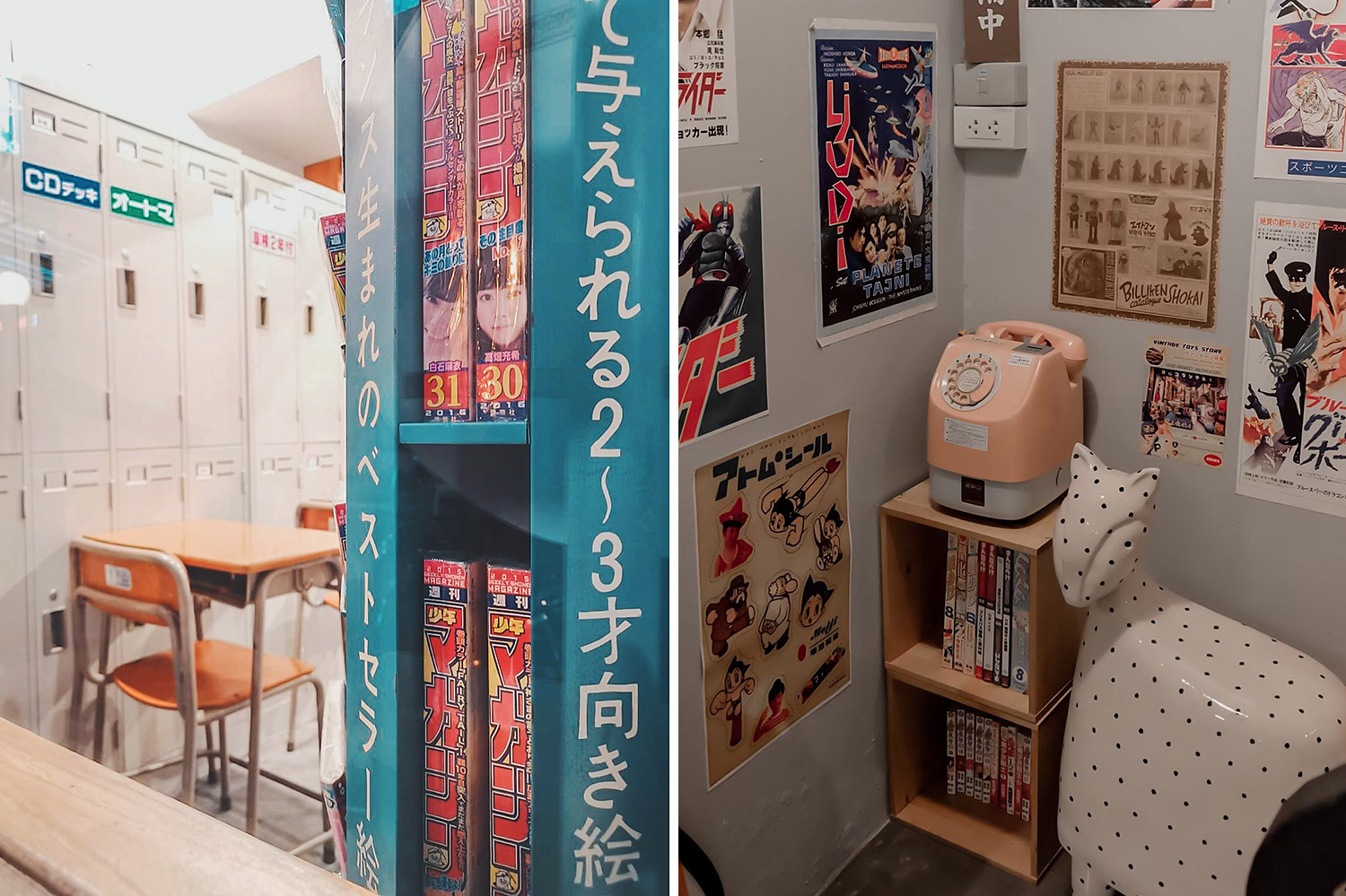 If you like visiting cafes with unique aesthetics, Kafae Tuktheaw should be on your list. Once you enter, you're immediately transported into what seems like a street food hall in Japan complete with signs all around, plastic containers that have been repurposed to become seats and an interesting number of collectibles from action figures to miniature motorcycles all the way from Japan. Obviously, they want people to spend time taking photos there and they've succeeded judging by the number of social media posts about the place. When you want to take a break from the photoshoots, take a look at their menu where they offer various drinks, desserts and main courses like donburi bowls and curries. 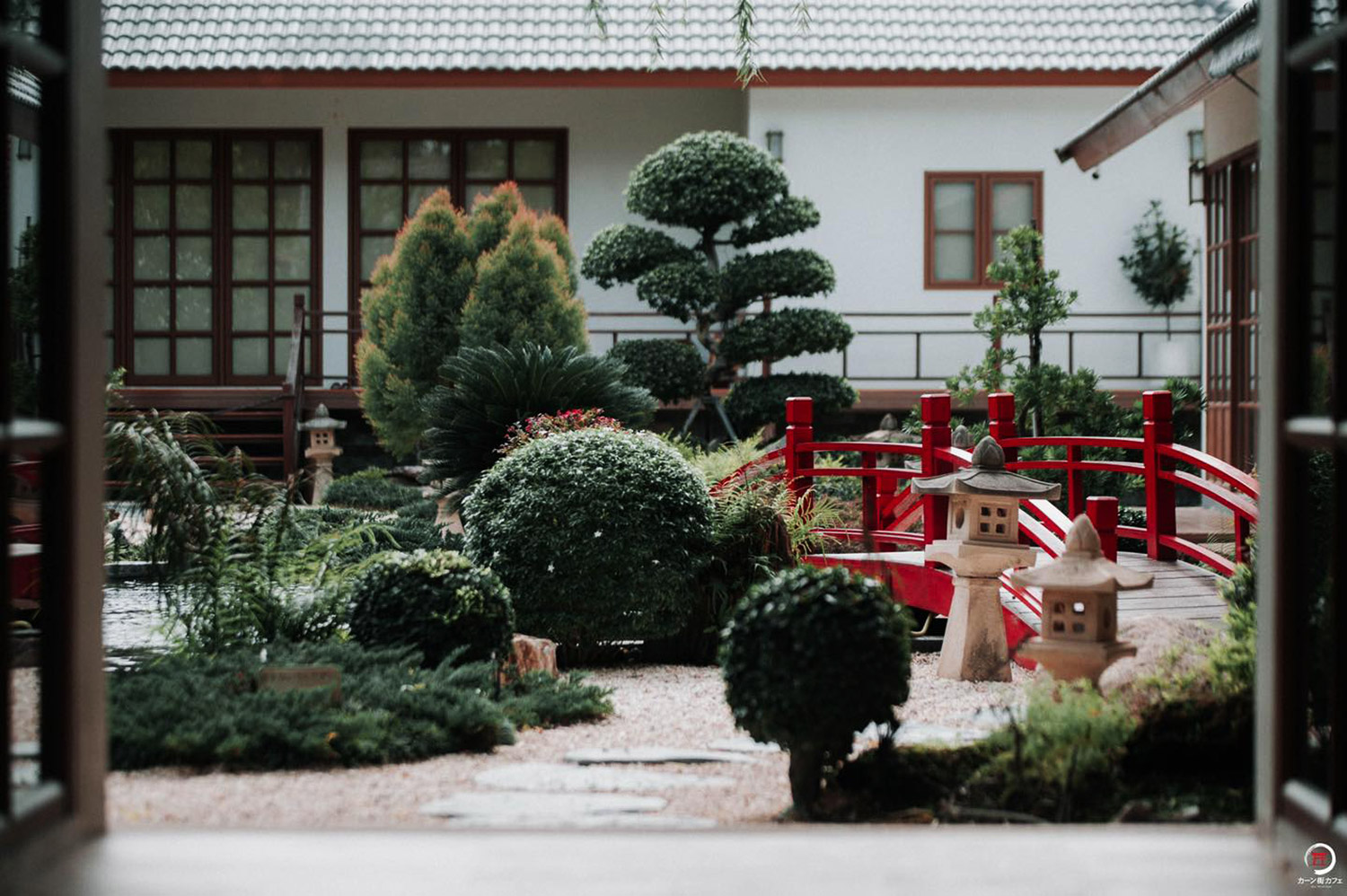 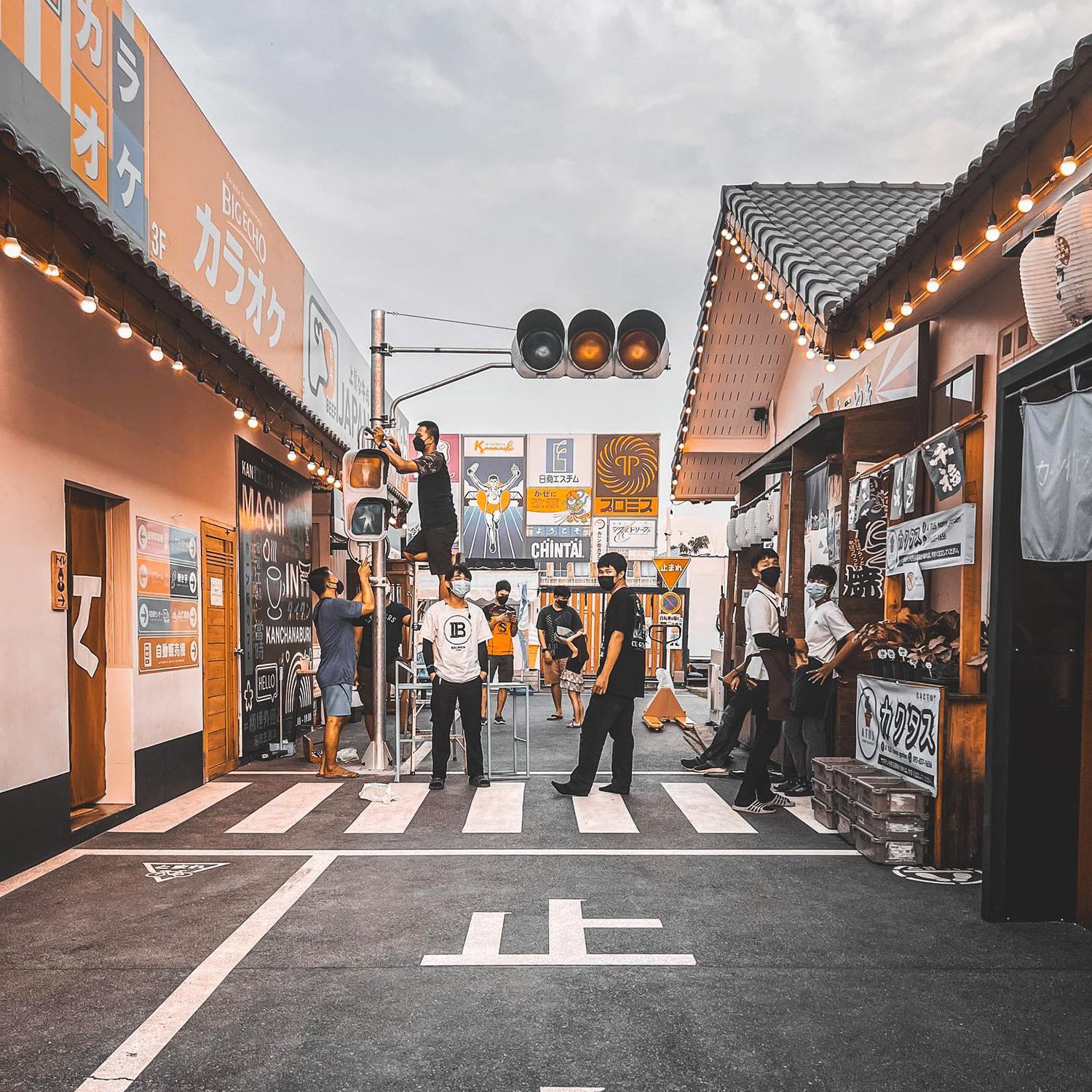 Kan Machi Cafe in Kanchanaburi does a great job of transporting you to the Land of the Rising Sun. A torii, the large red gate that's common in Japanese temples, greets you at the entrance, which is a little funny considering that the torii is used to show the boundary between normal space and sacred space. Maybe you'll have a spiritual experience as you take photos; do let us know! Kan Machi Cafe doesn't just focus on one era of Japan. While traditional things like the torii and Japanese houses are present, they also have a street designed to look like one of the alleys you would see in Tokyo complete with a vending machine and a slew of billboards. Keep your eyes peeled and you might see a figure that looks similar to Totoro from the iconic Studio Ghibli film Tonari no Totoro (My Neighbor Totoro). When you're done exploring the space, take a load off and take a sip of one of their drinks or treat yourself to their desserts. If you're really spent, they've got actual meals like curry rice and teriyaki. 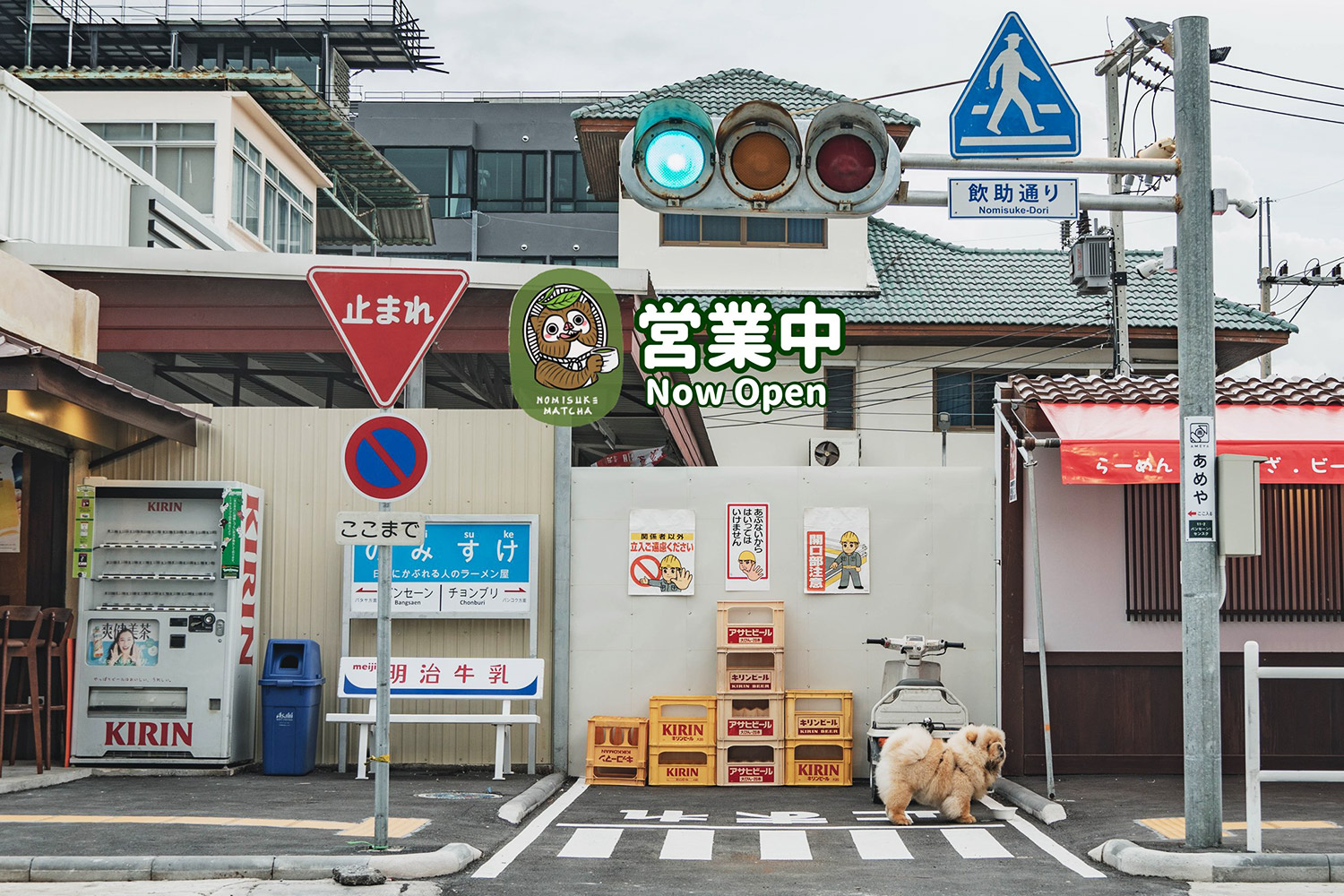 One of the greatest design feats someone could achieve is to make a small space work aesthetically and functionally. Nomisuke Ramen, located seaside and roadside at Bang Saen, had limited space to work with but work with it they did. Though only occupying a small area by the road, Nomisuke Ramen has transformed the space to resemble a roadside street food stall in Tokyo. There's a vending machine, a Japanese pedestrian crossing and even a full-fledged stoplight. Despite not being too large size-wise, crowds of people are visiting it to take photos of the place, many of which have been reposted on Nomisuke Ramen's FB page. The design is great and is definitely worth a visit, but Nomisuke Ramen also entices its guests to stay awhile and enjoy some... well, ramen as well as taiyaki, the fish-shaped Japanese street food that's commonly filled with red bean paste. Pay them a visit for great food and great pics. 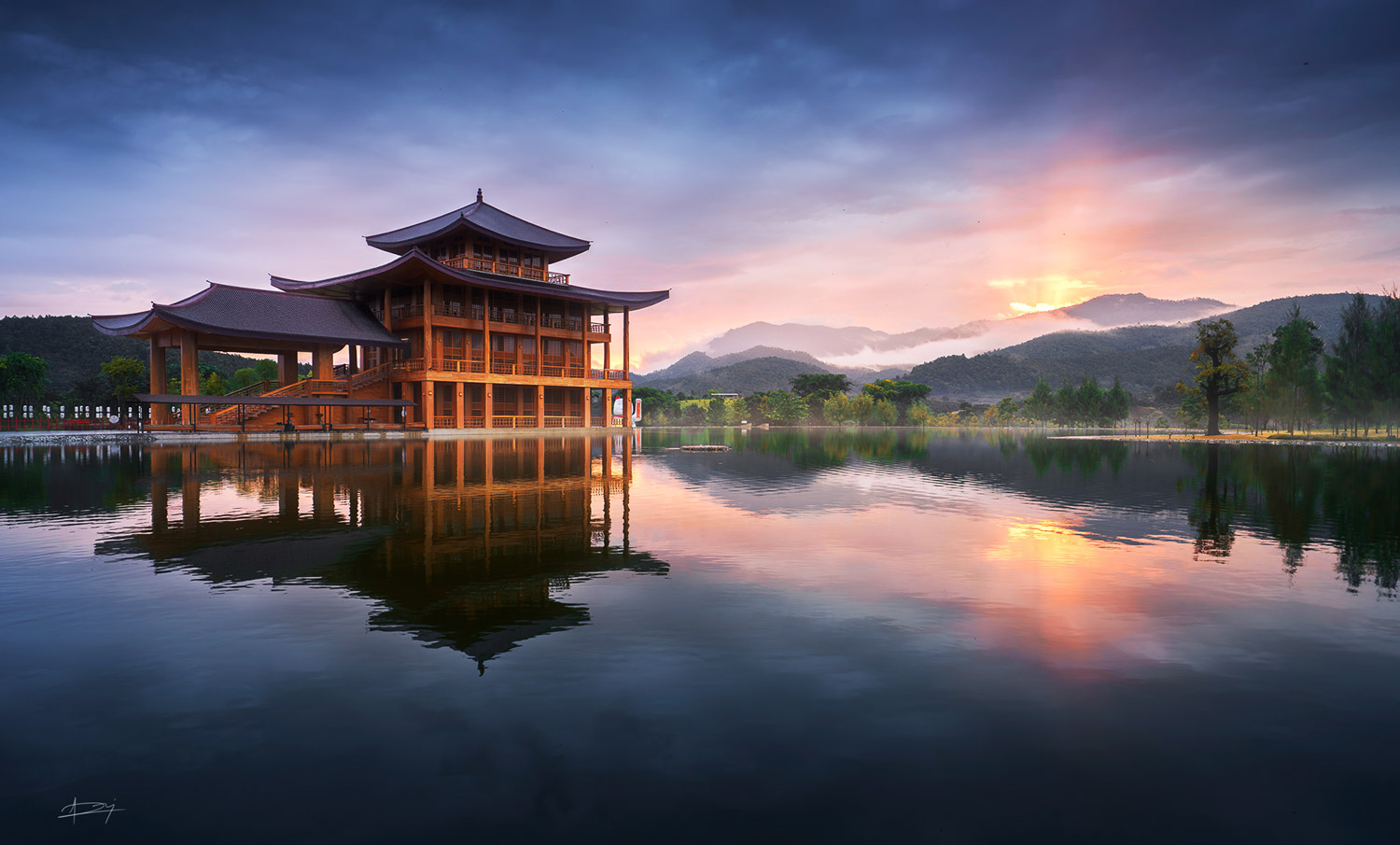 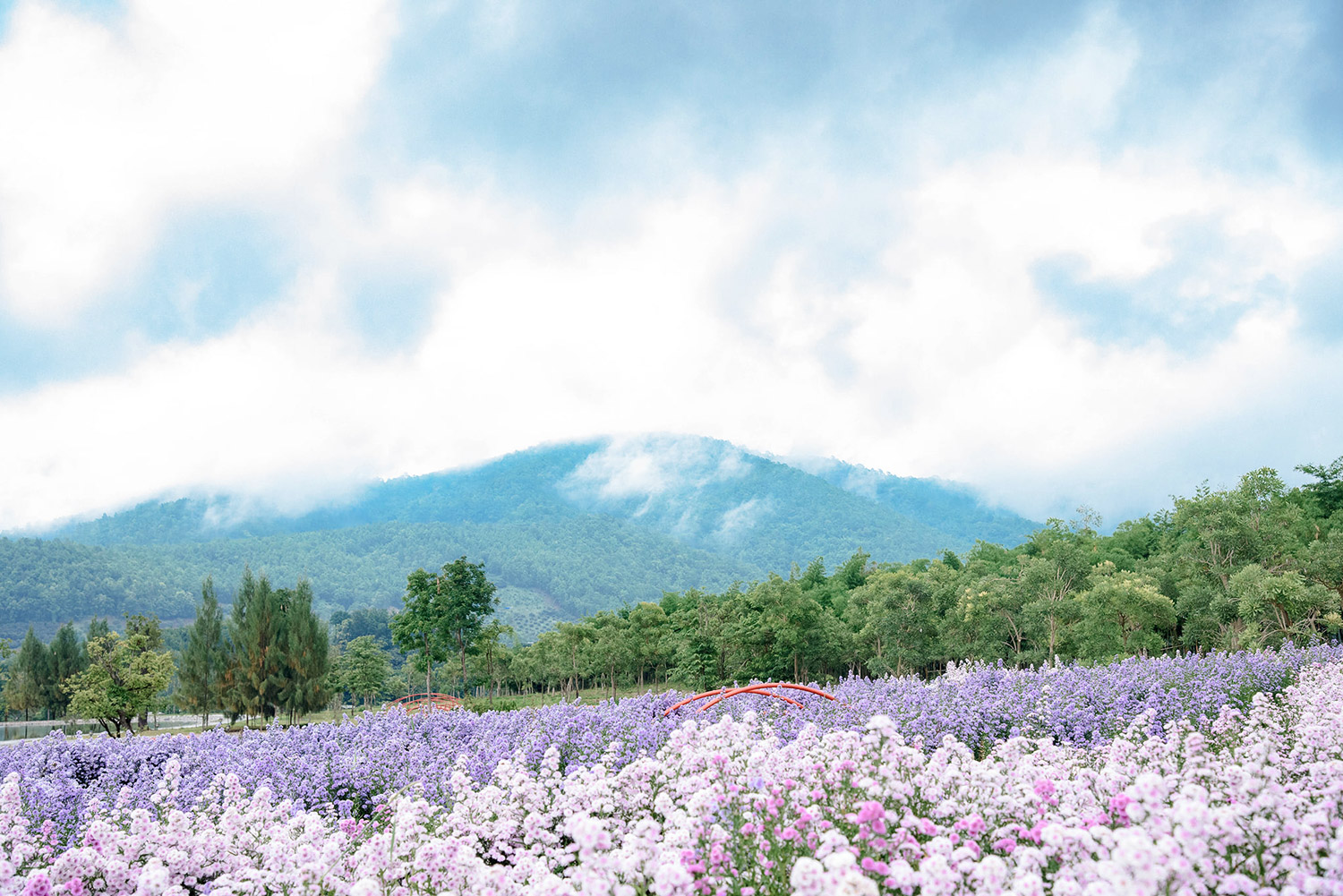 As "winter" kicks in, what's more of a perfect excuse to head up to Chiang Mai to visit Hinoki Land? Nothing. The name seemingly suggests that this is some sort of theme park but that's not the case. Hinoki Land, named after the trees planted there, is a vast area that has a smaller version of a traditional Japanese castle made of wood that's situated on a koi-inhabited lake surrounded by mountains and trees. It almost seems as if you're visiting a Japanese palace. You're greeted by a large red lantern at the entrance and you'll pass through a number of torii gates to go to the wooden structure. If you really want to immerse yourself in the experience, you can also rent traditional Japanese garb. There are many -- and I mean many -- photo spots so a visit here should give you social media content for at least a few weeks. When you're all tuckered out from photos, they've got food, drinks and desserts to replenish your strength and perhaps go on yet another photo round much to the dismay of your dad, who wants to go home already.