PRACHUAP KHIRI KHAN - Four men have been arrested for a savage attack on an elderly British family holidaying in Hua Hin over the Songkran holiday after a video of the incident went viral on the internet.

The video, captured by overhead security cameras and posted this week on social media, sparked shock and outrage over its brutality and the ages of the victims: a 65-year-old woman and a 68-year-old man from Scotland.

They all are expected to appear in court before next week. 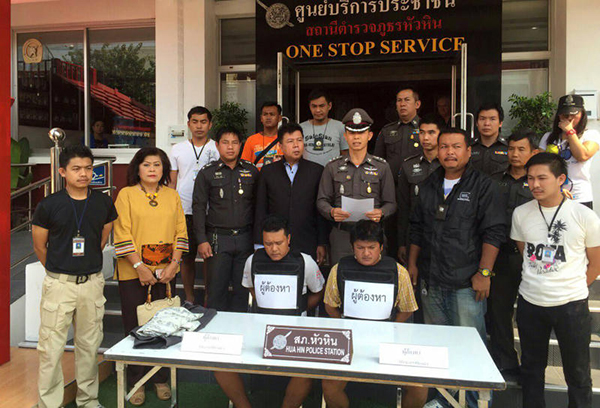 Hua Hin police stand behind two suspects (seated), who were arrested following an assault on an elderly British couple and their son. The tourists were savagely attacked during a family vacation in Prachuap Khiri Khan. (AP photo)

"The men say they are sorry and that they wouldn't have done this if they weren't drunk," he added.

In the clip, the family is seen walking in front of Wat Hua Hin on Soi Bintabaht around 1.30am on April 13 amid festivities for the Thai New Year.

An altercation breaks out with a group of men on the street who punch all three in the face, kick their bodies and stomp on their faces in an attack that lasts about two minutes.

The attack stops only when all three victims are seen lying apparently unconscious on the ground. As the gang disappears, bystanders come to their aid.

Pol Col Chaiyakorn said the attack started after "the son accidentally bumped into one of the Thai men".

Lewis Owen, 68, and his son John, 43, suffered head injuries requiring stitches, he said. Rosemary Owen, 65, was more severely injured, suffering a build-up of fluid in the brain that was removed, he said.

"The hospital is still holding her for observation for serious head and eye injuries," said Pol Col Chaiyakorn.

The incident just made the headlines in Thailand after the British media, namely The Telegraph, Daily Mail and Mirror, reported it on Wednesday.

The attack is just the latest brutal assault on foreign tourists, which contribute to 10% of the country's gross domestic product.

In March, four French tourists were assaulted on the island of Koh Kut as they walked to dinner. Among them were a mother and daughter who were both raped.

Two British backpackers were murdered on Koh Tao in 2014. Autopsies showed the couple, a young man and woman, had been severely beaten and the woman raped. Two Myanmar migrants were convicted of the crime based on DNA evidence that rights groups say was questionable.

More than a museum

Brits in sombre mood in Windsor before funeral

'Day of shame' as over 90 killed in Myanmar