SINGAPORE - Singapore police said on Friday they are hunting a man who managed to steal more than S$30,000 (783,000 baht) from a bank using nothing but a piece of paper. 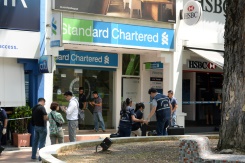 Singapore police investigate a crime scene in front of a Standard Chartered bank branch, on July 7, 2016.

The suspect, described as caucasian, strolled into a Standard Chartered branch in an expatriate enclave of the city around lunchtime on Thursday and handed staff a note with his demands.

Minutes later, he walked out of the branch with S$30,000 in cash, said a source close to the investigation, who asked not to be named.

A police spokesman confirmed the robbery and said no weapon was used, but gave no details of the note's contents.

The Straits Times newspaper said police were searching for an Australian man.

Bank robberies are rare in Singapore, whose tough stance against crime and strict ban on private gun ownership have made it one of Asia's safest cities.

The last attempt was in November 2008 when a man disguised himself as a woman threatened tellers with what he called a "bomb" in a paper bag. He was restrained by bank staff and arrested.

EU, US seek coordinated response to Russia over Ukraine crisis