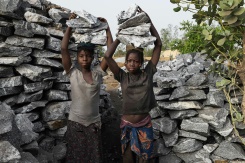 Huge numbers of young people work in sectors as diverse as cotton picking, mining and street selling in Burkina Faso

One of them, standing in front of a pile of rock as large as he is at the Pissy open-cast granite quarry in a neighbourhood of the capital Ouagadougou, begins to hammer away at his haul.

They are among the army of child labourers who make up Burkina Faso's young workforce.

As many as 60 percent of children aged between 5 and 17 are involved in some form of work, according to the National Survey of Child Labour (ENTE) compiled in 2006.

Huge numbers of young people work in sectors as diverse as cotton picking, mining and street selling in the west African country of 19 million people where 44 percent live below the poverty line.

Two other young mine workers, Amy, 15, and her 14-year-old sister work close to the two young boys.

"We both come on one bike. It takes more than an hour. I pedal and when I can't do it anymore, my sister takes over," said Amy.

From about 7:00 am, around 1,000 people begin to descend into the vast crater that is their workplace -- mostly wearing rubber thongs or flimsy sandals.

Many of them are children whose hands are badly lacerated by the stone that they extract and is used in the construction of roads and houses. None wears gloves for their arduous work.

Working eight hours a day, six or seven days a week, they carry trays laden with stones on their heads which they then attempt to sell for 300 CFA Francs (50 US cents, 45 euro cents). They can expect to earn up to $2 a day.

According to the ENTE, one quarter of child labourers are engaged in dangerous work such as mining.

"Do you have medication? It was the hammer," said Nemata, a 12-year-old, whose finger had gone visibly purple following an accident.

Boureima Koumbem, a doctor and consultant at the CHU Yalgado hospital in Ouagadougou warns that aside from visible injuries, children and adults working in the granite mines are also particularly susceptible to respiratory illnesses.

"They are exposed to pneumoconiosis, their lungs are invaded by mineral dust. These are silent diseases. These people are under-oxygenated throughout their lives -- sometimes without even knowing it," he said.

At the Pissy mine, families have had plots that they are permitted to excavate since France was the colonial power in what was then known as Upper Volta.

Children have long been expected to help support their families by joining in the process from an early age.

Both Nemata, whose father died when she was younger, and Amy are enrolled in school but work in the mine in the summer holidays to help their families "buy notebooks," said Nemata and to "help pay for school," according to Amy.

According to the International Labour Organisation (ILO), just two-fifths of children in Burkina Faso attend school and the quality of the education they receive is variable, with overcrowding and poor conditions common.

The country's Ministry of Social Action is aiming to get 80 percent of children working in mining back into education by opening schools next to mines, promoting enrolment and offering vocational training.

The 26 billion CFA scheme ($45 million, 40 million euros) that was adopted by the cabinet in September has however run into difficulties and is facing funding shortfalls.

But the blight of child labour is not just down to government failings, according to Alizetta Korgo, a member of the Foundation for the Teaching and Promotion of Human Rights and Development in Africa.

"If you are a child and you're going to school -- and you do not aid your family -- you are frowned upon by society which treats you as lazy," she said.

Blinken in Ukraine in show of support against Russia