AVIGNON (FRANCE) - On paper it was already theatrical TNT. One of the hottest directors in the world and some of France's greatest stage actors in a play warning about the slide into dangerous political populism. 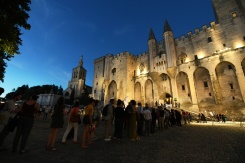 Spectators queue to enter the Palais des Papes to attend the play of Ivo Van Hove "The Damned" by Luchino Visconti, on July 6, 2016 in Avignon, southern France, at the opening of the 70th Avignon theater Festival

And "The Damned" has not disappointed.

Ivo van Hove's powerful adaptation of Luchino Visconti's 1969 film about the insidious rise of fascism opened the Avignon festival in France this week to rave reviews, with critics from the right and left rising to hail it as "sublime, unforgettable, chilling triumph".

With Europe reeling from Britain's vote to leave the EU after an ugly campaign sometimes marked by anti-foreigner feeling, and political strongmen on the rise across the continent, the play shows how even the most sophisticated societies can slip into dictatorship.

Van Hove -- who won this year's Tony award for best director for his "A View from the Bridge" after sell-out runs on Broadway and in London's West End -- said it was no accident that he chose to bring "The Damned" to the stage now.

"We see everywhere in Europe but also in America and across the world a rise in populism and the extreme right," he told AFP.

"You have to start to think when a politician or a head of state urges us to follow such impulses, such deep feelings."

The Belgian-born master tells the story of how the Essenbecks, a family of German industrialists -- a thinly-veiled reference to the Krupps dynasty -- are seduced and used by the Nazis.

"The play shows very clearly how a society which was thought of as a pinnacle of progress, culture and democracy can give its consent to barbarity," said Denis Podalydes, one of its stellar cast drawn from France's most celebrated company, the Comedie Francaise.

It is the first time the troupe, which usually performs the French classics of Racine and Moliere in Paris, has graced the huge summer festival in the south of the country for nearly a quarter of a century.

And it is rarely been deployed with such cinematic or technological elan, with von Hove setting a cameraman to prowl among the actors to catch close ups of key moments, which are then shown on screens on the massive outdoor stage in the courtyard of the Palace of the Popes.

In a telling twist, Von Hove even turns the lens on the audience after each Nazi murder as if to ask, "And you, what would you have done?"

"I wanted the audience to feel very close to what was happening, to be in the characters' skins," said the director, who worked with David Bowie in the last weeks of the rock legend's life this year to stage his musical "Lazarus" in New York.

Some critics saw in the bloody finale to "The Damned" as a clear reference to the Bataclan massacre, in which jihadist gunmen driven by an equally extreme ideology killed 90 people in the worst of the November 13 Paris attacks.

Whatever the intent, all praised what the French daily Le Monde hailed "a grave triumph which rises to its subject, a chilling, grandiose spectacle that is never cold."

"The Damned" is only one of a number of plays about the rise of extremism at the Avignon festival, which is celebrating its 70th year as one of the world's greatest theatre gatherings.

With the Alpine country to vote in a new presidential poll in October after the far-right lost by a tiny margin in May's disputed election, the tragedy tells of a professor who flees Nazi-run Vienna only to kill himself on his return after the war because its lessons have not been learnt.

Lupa said he was drawn to the play because of the "new wave of xenophobia and anti-Semitism across Europe".

He said he feared the continent was "turning away from the humanist progress" of the postwar period.

And in what is billed as a police-type thriller "Tristesses" ("Sadnesses"), the Belgian writer-director Anne-Cecile Vandalem sets out to investigated how anti-democratic political parties have taken hold in northern Europe on the back of a "resurgence in nationalism".

Meanwhile, the millions of people alienated by politics are explored in "Those who Stray are not Wrong" by the young French playwrights Kevin Keiss et Maelle Poesy.

A doctor representing 74 medical clinics on Thursday petitioned the House of Representatives to look into allegations of fraud in patient access to the universal health coverage scheme and ensure transparency in the initiative.

The Centre for Covid-19 Situation Administration (CCSA) has allowed fans to watch domestic league matches when they restart next month, the Football Association of Thailand (FAT) announced on Thursday.