HARARE - The pastor leading Zimbabwe's new protest movement walked free from court Wednesday after charges against him of attempting to overthrow President Robert Mugabe's authoritarian government were thrown out. 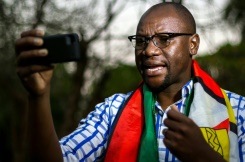 Zimbabwean cleric Evan Mawarire, wrapped in the Zimbabwean National flag, recording an instalment of his #ThisFlag video series, in which he decries the government's failures on May 19, 2016

Evan Mawarire was greeted outside Harare magistrates' court by several hundred cheering supporters after the magistrate told the court that his "remand... is hereby refused" and acquitted him of the charges.

Mawarire, who started the popular ThisFlag internet campaign in April, was an organiser of a one-day nationwide strike last week that closed offices, shops, schools and some government departments.

Mawarire, 39, had appeared in court, the national flag tied around his neck, on allegations of setting up a campaign aimed at "overthrowing or attempting to overthrow the government by unconstitutional means."

A recent series of demonstrations, the largest in years, has been driven by an economic crisis in Zimbabwe that has left banks short of cash and the government struggling to pay its workers.

Mugabe, 92, has previously used his ruthless security forces to crack down on any public show of dissent.

The protests have revealed long-simmering frustration in a country where 90 percent of the population is not in formal employment.

Mugabe, who is increasingly fragile, has overseen years of economic decline, repression of dissent, allegedly rigged elections and mass emigration since he came to power in 1980.

'It's not over': Iranian Kurds in Iraq in Tehran's crosshairs