ISTANBUL - Turkish President Recep Tayyip Erdogan on Friday faced growing EU criticism over an "unacceptable" crackdown that has seen tens of thousands of people detained or sacked, as supporters celebrated the defeat one week ago of the coup aimed at ending his rule. 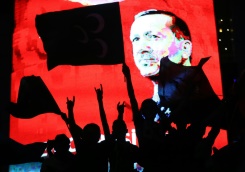 Supporters stands in front of a screen displaying a portrait of Turkish President Recep Tayyip Erdogan during a rally in Ankara on July 20, 2016

The authorities imposed a state of emergency on Thursday, strengthening state powers to round up suspects behind the failed military putsch and suspending a key European rights convention.

They slammed as "unacceptable" the sacking or suspension of tens of thousands of people in the education system, judiciary and the media and said they were monitoring the state of emergency "with concern".

Turkey's Western allies have been watching with alarm the turmoil in the key NATO member state, which has also been reeling from a wave of bomb attacks by Islamic State group jihadists and Kurdish rebels.

But at home, Erdogan basked in the support of jubilant crowds who took to the streets of Istanbul overnight.

The president has said July 15 would in future be marked as the "Remembrance Day of the Martyrs".

Thousands of Erdogan supporters -- many carrying lit torches and waving the national crescent flag -- streamed across the Bosphorus bridge that was one of the key battlegrounds.

Flocking to the landmark where Turkish citizens stood up to the mutineers, they brandished signs such as "Our flag, our nation" and denounced the man Erdogan blames for the coup plot -- US-based cleric Fethullah Gulen, 75.

Erdogan has repeatedly rallied citizens -- on TV and even with mass phone text messages -- to stay on the streets in the fight against the "terrorist" followers of the spiritual leader whom he accuses of forming a secretive "parallel state" in Turkey.

Late Wednesday, after a marathon meeting of his national security council, Erdogan declared a three-month state of emergency -- Turkey's first since 2002, the year before he first came to power as prime minister.

Turkey also said it would suspend parts of the European Convention on Human Rights.

The emergency powers allow Erdogan and his cabinet to rule by decree and rights groups and opposition parties fear they could lead to further curbs on freedoms of speech and assembly.

"The road to arbitrary rule, unlawful behaviour, feeding on violence, has been chosen," charged the opposition Peoples' Democratic Party (HDP).

"Society has been forced to choose between a coup or an undemocratic government."

Erdogan has insisted democracy would "not be compromised", while his government pointed out that France had also declared an emergency in the wake of the bloody jihadist attacks.

Deputy Prime Minister Numan Kurtulmus said the special measures may only last 45 days, insisting that "we want to end the state of emergency as soon as possible".

Asked whether the government may impose curfews, Kurtulmus said: "Very clearly no. This is not a declaration of martial law."

Even before the coup bid, critics had voiced mounting concern about Erdogan's efforts to silence his opponents and clamp down on the press.

Erdogan has signalled the hunt of conspirators will continue, having declared Thursday that 10,410 people had so far been detained with 4,060 of them remanded in custody, including more than 100 generals and admirals.

Some have been seen bruised and wounded in images published by state media.

About 50,000 people have been sacked or suspended.

The government said the coup claimed 265 lives -- including 24 plotters, and 241 citizens and members of the security forces who opposed them.

Erdogan has demanded the United States extradite Gulen, the leader of the Hizmet (Service) movement, which runs a global network of schools as well as businesses, media outlets and cultural centres.

Gulen and Erdogan were long allies who sought to have Islam play a central role in politics in the traditionally secular but mainly Muslim state.

But they fell out several years ago, with Erdogan suspecting Gulen followers leaked wiretaps that accused his inner circle of corruption. The president has hit back with purges of suspected "Gulenists" in the security and judicial services.

Turkey has sent Washington what it says is evidence about the 75-year-old Gulen's alleged involvement in the attempted government overthrow.

The usually-reclusive preacher has condemned the attempted putsch and rejected the accusations against him as "ridiculous, irresponsible and false".

Walls close in on poorest as virus shrivels economy

Shuffling around their tiny slum home which is too small to stand up in, Thanapat Noidee and his wife Papassorn share donated noodles with their sons and worry about bills, as the coronavirus pushes Thailand's poor deeper into penury.