MANILA - The Philippines received the first of 10 coast guard vessels from Japan Thursday, the coastguard said, as the two countries boost security ties in the face of their separate maritime disputes with China. 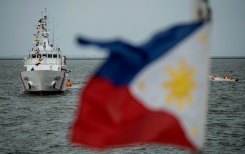 Philippine Coast Guard's first ever multi-role response vessel, the BRP Tubbataha, arrives at the port in Manila on Aug 18, 2016.

The 44 metre BRP Tubbataha has arrived in Manila, the Philippines coast guard said in a statement, adding that it will be used for search and rescue, law-enforcement and transport purposes.

They did not specify where it would be deployed.

This is the first of 10 Philippine coast guard ships being built in Japan, supported by Japanese aid money, as the former World War II foes seek to boost defence ties in the face of growing Chinese aggression in the South China Sea.

Japan -- the Philippines' top source of development aid -- said this month it would give Manila two additional patrol vessels, and that it was discussing the possible lease of surveillance aircraft.

Japan and China are locked in a long-running dispute over uninhabited islets in the East China Sea. Manila and Beijing have overlapping claims in the South China Sea.

The Philippines has been seeking closer defence ties with Japan as well as traditional allies like the United States and Australia in a bid to boost its capabilities against regional giant China.

The Philippine military and coast guard are among the region's weakest.

This came after a UN-linked tribunal ruled in July that China's claim to most of the South China Sea was invalid, handing a sweeping diplomatic victory to the Philippines.

Beijing vowed to ignore the decision, and the Philippines and China have been preparing for direct talks to ease tensions.