BARCELONA - Spain's Catalonia region said Wednesday it had launched the country's first public DNA profiling project to try to identify some of the 114,000 people who disappeared during the nation's civil war and subsequent dictatorship. 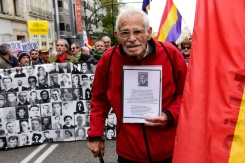 The issue is hugely sensitive in Spain, where rights abuses during the 1936-1939 conflict and the ensuing 36-year dictatorship remain uninvestigated for fear of reviving once-bloody divisions, despite growing calls to heal still-open wounds.

"This is a decisive step towards restoring historical memory and it is a democratic duty that was long pending," said Raul Romeva, who handles transparency matters in Catalonia's regional government.

"This should have started 40 years ago," he added, referring to the death of dictator Francisco Franco in 1975 and the subsequent transition to democracy.

Under the programme, scientists will create a database for the DNA profiles of those related to people who disappeared, collect samples from remains found in mass graves, and try and find matches with the help of the Barcelona-based Institute of Legal Medicine and Forensic Sciences.

This is the first such project to be launched in Spain.

A similar programme has already been set up in Barcelona on a smaller-scale, but it is privately-funded by two descendants of people who disappeared.

In the space of five years, they have collected 125 genetic samples from relatives, but have not been able to cross-check the data with any remains as they do not have access to mass graves.

Relatives of those who were killed or disappeared during Spain's dark, recent past have long asked the government to start exhuming and recovering victims' remains.

Under growing pressure, the then Socialist government passed a law in 2007 calling for public funds to be provided to help cover the costs of exhuming remains, and the United Nations later urged Spain to do more.

But little has since been done, and Spain's acting conservative Prime Minister Mariano Rajoy has even boasted of not having spent one euro to put the law into effect.

"The transition established democracy but... only by knowing our history will we be able to build our future," Romeva said.