FISHTAIL (UNITED STATES) - Winding through the arid green hills, the highway gives way to a rugged gravel road ending at a lonesome gate like so many in this land of ranches. Inside lies an experiment in music, sculpture and how to present art in the 21st century. 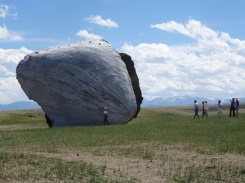 Tourists look at "Beartooth Portal," a work by Spanish sculptors Anton Garcia-Abril and Debora Mesa -- known together as Ensamble Studio -- at the Tippet Rise Art Center near Fishtail, Montana, on July 15, 2016

Inaugurated this summer, the 4,700-hectare (11,500-acre) estate called Tippet Rise is the brainchild of a wealthy couple of free-spirits who are fulfilling a lifelong goal of creating their own classical music venue.

The Tippet Rise Art Center, hidden some 105 kilometers (65 miles) from Montana's largest city Billings, aims to marry art to the American West's overpowering natural openness, with musicians at times performing outdoors amid sculptures in view of the Beartooth Mountains.

But while the ambitions and setting are big, the founders, Peter and Cathy Halstead, have deliberately gone small in audience size. With Montana famous for fast-gathering storms, most concerts take place inside an acoustically state-of-the-art barn with just 150 seats.

The intimacy is integral to Tippet Rise, with the audience invited to join beforehand in a gourmet buffet dinner featuring local produce and to linger around afterwards to discuss the music with the artists over wine under a star-filled sky.

"Who wants to build Carnegie Hall? It's already there," asked Peter Halstead. He and Cathy, grandparents who have known each other since they were teenagers, speak exuberantly about the project and complete each other’s sentences.

"Think of all these things that were built in the '40s and '50s to show that you had a proud civic organization that could afford to have a big audience," Peter said of the era of big classical venues.

"Suddenly we started noticing that nobody is in the big halls anymore. They're half empty," he said. "What we have is the same size as the Temple of Solomon."

- Informality at the concert hall -

The Halsteads are more than just patrons of Tippet Rise, which is named after Cathy's mother. Inside the barn, the Halsteads take unreserved seats for each performance, the bearded Peter sporting sandals and a faded bucket hat.

For a performance of Messiaen's "Visions of the Omen," Peter interspersed the dark work by reciting his poems about the September 11 attacks and sat beside pianist Svetlana Smolina, turning her notes for her.

Peter, who has recorded as a pianist and published poetry, hails from an East Coast banking family. Cathy, whose passion is painting, took over the liquor company of her billionaire father Sidney Frank who promoted Grey Goose vodka and Jagermeister liqueur.

The couple has no expectation that Tippet Rise will ever make money. Tickets cost $10, far from enough to take care of the land's 3,000 sheep, 500 cattle and 5.5 kilometers (three and a half miles) of newly designed walking trails, as well as up to 40 employees in season.

"We have the wonderful luxury that we come from the world of being able to give," Cathy said.

Tippet Rise runs entirely on geothermal and solar energy, generating enough power to distribute to neighboring ranches, and has the capacity to collect 380,000 liters (100,000 gallons) of rain water, said Alban Bassuet, the French-born acoustician and designer who relocated to Montana to head construction.

"Arts centers are usually notorious for their energy consumption. It is very unusual to do this," he said.

Another concert in the barn celebrated Mark di Suvero, one of the leading contemporary sculptors, who sat in jeans in the audience.

Di Suvero is among the signature artists on display at Tippet Rise, where electric-run vans shuttle visitors to works across the estate. Di Suvero's "Beethoven's Quartet" imagines musical instruments in an abstract steel meld, with guests hitting it with mallets and hearing the sound reverberate through the hills.

"We said, what if a sculpture were not in a museum, where it tends to be confined by the walls, or even outside with a lot of sculptures?" Peter Halstead said.

"What if it had its own valley?" he said. "What if you could spend the entire day with that one sculpture?"

With Montana's harsh winters, the center -- best reached by four-wheel-drive vehicle -- does not anticipate concerts year-round.

When shows are off, the Halsteads envision Tippet Rise as a retreat, where musicians can stay with their families and practice on the center's dozen Steinway pianos.

The scope for audience growth is narrow, with Tippet Rise already obliged to turn away visitors who showed up without tickets.

Instead, Tippet Rise has built an in-barn studio with 3D immersive sound that is capable of livestreaming or broadcasting performances.

"There are never going to be more than 150 people in the audience, so you get to the point where the entire global footprint of the festival is going to be streaming -- video and audio -- of an extraordinarily high nature," said Tippet Rise's music director Christopher O'Riley, a pianist known as host of the "From the Top" program on National Public Radio as well as his Radiohead covers.

"And I think we're very happy with that. It becomes a bucket place to go, but it doesn't mean you can't experience it."