LOS ANGELES - Since "Fargo" combined critical acclaim with big audiences, Hollywood executives have increasingly been reaching into studio vaults to convert the success of beloved movies into ratings on the small screen. 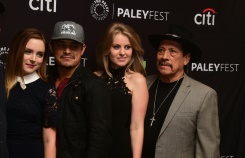 Film-to-television adaptations have actually been around for decades but demand for movie-inspired pilots in recent years has seen unprecedented growth.

Over the last two weeks, 18 hotly-anticipated series bound for TV audiences in the fall have been previewing at the annual PaleyFest television festival in Beverly Hills, California -- with almost a third based on movies.

Fox's "Lethal Weapon," and "The Exorcist" air this month while Robert Rodriguez's Latino-focused El Rey network brings back the vampire series "From Dusk Till Dawn" for a third season.

"I think the trend of remaking properties is very strong right now in Hollywood," Diego Gutierrez, the executive producer of "From Dusk Till Dawn: The Series," told AFP at PaleyFest.

"It's always great to have source material that is strong and has legs."

Early October sees the return for a second season of "Ash vs The Evil Dead" on the Starz network and The CW's "Frequency" premieres a few days later.

HBO's "Westworld," based on the 1973 film of the same name, bows in October, while more than 30 film-to-TV conversions are in various stages of production.

Over the coming months and years expect to see "Rambo: New Blood," "Uncle Buck," "Tremors," and "Van Helsing" vying to emulate the success of "Bates Motel," "Fargo" -- one of the most nominated shows at this year's Emmys -- and "Hannibal."

The appeal of reimagining movies, say producers and their actors, is obvious.

Why risk making a pilot from scratch, spending months and a small fortune on filming, only to have it rejected, when you can reimagine an established property with a fan base already built in?

"There's so much competition that it helps when a title is known -- it's going to get more eyeballs," Jordana Brewster, star of five of the "Fast and Furious" movies and lead cast member in the "Lethal Weapon" TV series, told AFP.

"They want the marketing already there. They want to be able to see the posters, see the t-shirts, see the hats," added Brewster's co-star Clayne Crawford, who plays Detective Martin Riggs, the character made famous by Mel Gibson.

"I worked on a show, 'Rectify' for five seasons or four seasons and no one cared."

The pendulum swing to TV has not gone unnoticed by Hollywood's A-list, who more and more have been finding meaty roles on the small screen when traditionally the career path has gone the other way.

Notable converts include two-time Oscar winners Jessica Lange, of FX's "American Horror Story," and Jane Fonda, who has been a regular in the first two seasons of Netflix's "Grace and Frankie."

Oscar nominees Clive Owen, Maggie Gyllenhaal and Viola Davis and Taraji P. Henson -- both nominated for Sunday's Emmy Awards -- have all starred in their own shows while Hollywood heavyweights like Kiefer Sutherland, Don Cheadle and Matthew McConaughey have been blazing the trail for years.

Danny Trejo, one of the most distinctive character actors in cinema history, has established himself as Hollywood's go-to hard man over more than 200 movies, including "Heat" (1995), "Con Air" 1997" and "Machete" (2010).

The 72-year-old also has credits in dozens of TV series, including "The X Files," "Breaking Bad," and "Sons of Anarchy."

Trejo starred in "From Dusk Till Dawn" in 1996 and in the second series of the TV spin-off and says both big and small screen acting present their own challenges.

"I love movies, I love doing film, but then TV is a lot faster. You've got to be on because they're shooting so many pages. Either way, I love the work."