UNITED NATIONS (UNITED STATES) - The United Nations will mobilize $181 million to shore up the emergency response to the cholera epidemic in Haiti and at least an equal amount for the victims and their families, a senior UN official says. 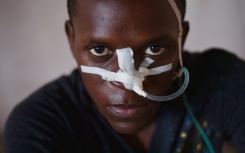 The financial package follows the United Nations's admission that it had a moral responsibility to help Haiti deal with the epidemic that broke out near a UN peacekeepers' base.

"The most immediate need is the funding for the cholera response," said David Nabarro, the UN's special adviser on sustainable development who is spearheading negotiations with Haiti and donor countries on the package.

Nabarro told AFP in an interview that the aim was to provide $181 million over three years and "at least the same amount" for the families of victims of the deadly epidemic.

Discussions are under way with the Haitian government on the details of the aid package, which UN Secretary-General Ban Ki-moon is expected to announce at the end of October.

While the United Nations maintains that it has a moral responsibility to help Haiti, it rejects claims that it is also legally responsible for the damages from the health emergency.

Several lawsuits filed by victims in US courts have been rejected because of the immunity from prosecution accorded to UN missions.

Studies have traced the cholera outbreak to Nepalese peacekeepers who were dispatched to Haiti by the United Nations after the massive 2010 earthquake.

The new measures are on top of a bigger 10-year plan valued at $2.2 billion to help Haiti improve its sanitation infrastructure, which the United Nations launched with the Haitian government.

"It is a complicated task, you need to get all the different pieces together," said Nabarro, who insisted that donors want to make sure that the funds will yield results in Haiti, which has a long history of political instability.

Nabarro rejected criticism that the United Nations had been slow in responding to the cholera outbreak.

"We have done an awful lot of work and spent quite a lot of money," he said.

There has been a 90 percent drop in new cases and mortality rates since the epidemic reached its peak in 2011, he said.

Cholera, a disease that is transmitted through contaminated drinking water and causes acute diarrhea, is a major challenge in a country with poor sanitary conditions.

The United Nations must do more, said Nabarro.

"We know the big peak each year comes in October" with the rainy season, he said.

"You have to get each person with suspected cholera under treatment within 24 hours."

Nabarro said funding for rapid-reaction units was lacking, with an estimated $12 million needed this year and another $50 million by the end of 2017.

TRANG: A 40-year-old man died after falling from the unfenced roof deck of the five-storey building where he was skateboarding, in Muang district.

Bangkok motorists are advised to avoid 11 city roads during planned rallies by at least three pro-democracy groups on Thursday to mark the anniversary of the June 24 1932 revolution that transformed Thailand from absolute monarchy to a constitutional monarchy.