Two suspects blow themselves up during Ankara police operation
World

Two suspects blow themselves up during Ankara police operation

ANKARA - Two suicide bombers detonated their explosives during a police operation in the Turkish capital Ankara after officers called on the suspects to surrender, state media reported on Saturday. 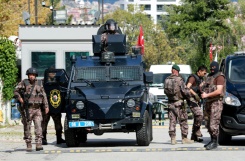 They set off the car bombs they had prepared, the official Anadolu news agency said, adding that the two suspects were dead.

Ankara governor Ercan Topaca told reporters at the scene it was "likely" that they had connections to the outlawed Kurdistan Workers' Party (PKK).

"The materials used, the construction and the way it was planned point to the PKK a little," he said, quoted by Anadolu.

The PKK -- proscribed as a terrorist organisation by Turkey, the EU and US -- has been waging a 32-year insurgency against the state in the country's southeast.

Violence returned to the region after the collapse of a two-year ceasefire last year.

The governor said that the suspects were sought by police after a tip-off came from Diyarbakir, a mainly Kurdish province in Turkey's southeast.

In televised comments, Topaca also said the suspects were a male whom they had identified and a female whose identity they had not yet ascertained yet.

The bombing comes two days before the first anniversary of Turkey's deadliest terror attack in its modern history in Ankara which left 103 dead. The attack was blamed on jihadists from the Islamic State group.

And on Friday, the Kurdish group Kurdistan Freedom Falcons (TAK) with ties to the PKK claimed responsibility for a motorbike bombing on Thursday near a police station which wounded 10 people.