QAYYARAH (IRAQ) - Iraqi forces prepared to retake the country's largest Christian town from the Islamic State group on Wednesday, a key milestone in their progress towards the jihadists' main hub of Mosul. 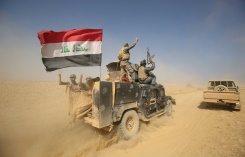 News of the move to recapture Qaraqosh sparked jubilation among Christians who had fled the town, with many dancing and singing in the city of Arbil.

Launched on Monday, the long-awaited advance on Mosul was making quick progress but US President Barack Obama joined a chorus of warnings the battle for IS's last Iraqi stronghold would be tough.

Officials have said the retaking of Mosul -- in Iraq's largest military operation in years -- could take weeks or months and warned that the hundreds of thousands of civilians still in the city could be used as human shields.

Federal forces stormed Qaraqosh, about 15 kilometres (10 miles) southeast Mosul, on Tuesday but IS fighters remained in the town.

Units from Iraq's elite counter-terrorism service (CTS), which has done the heavy lifting in most recent operations against IS, were poised to flush jihadists out of the town, officers said.

"We are surrounding Hamdaniya now," Lieutenant General Riyadh Tawfiq, commander of Iraq's ground forces, told AFP at the main staging base of Qayyarah, referring to the district that includes Qaraqosh.

"We are preparing a plan to assault it and clear it later," he said. "There are some pockets (of resistance), some clashes, they send car bombs -- but it will not help them."

Displaced Christians held early celebrations Tuesday night in Arbil, the capital of the autonomous region of Kurdistan, where they fled after IS seized the town.

After gathering for a group prayer outside a church in the city, some in the crowd sang, danced and clapped their hands, while others held lit candles.

"Today is a happy moment. There is no doubt our land will be liberated and we thank God, Jesus Christ and the Virgin Mary," said Hazem Djedjou Cardomi, a journalist among the crowd.

Qaraqosh was the largest of many Christian towns and villages seized by the jihadists who swept across the Nineveh Plain east of Mosul in August 2014.

The mass exodus it sparked displaced a large proportion of Iraq's already dwindling Christian minority, sending most into the neighbouring Kurdish region.

Few, if any, civilians are believed to remain in the town.

Three days into the operation, Iraqi forces were closing in on Mosul from several directions, including the south where federal troops and police have been battling through IS defences and retaking villages as they work their way up the Tigris Valley.

Some families recovering their freedom from IS for the first time in more than two years cautiously approached security forces waving white flags.

In one village of the Al-Shura district south of Mosul, the men were promptly isolated and herded into a handful of buildings for screening.

"Our forces are checking profiles against information we have from local sources because we are trying to find IS members," a federal police major told an AFP journalist there.

Most of the men wore long beards because the IS members who ruled them for more than two years banned trimming them.

Abu Abdullah, a villager, asked one of the police fighters for a cigarette, also prohibited by the extremist jihadist organisation.

On Wednesday, Iraqi forces had reached the village of Bajwaniyah, about 30 kilometres (18 miles) south of Mosul.

The "caliphate" that IS supremo Abu Bakr al-Baghdadi publicly proclaimed in Mosul's Great Mosque in June 2014 once covered more than a third of Iraq and parts of Syria.

But it has been shrinking steadily for more than a year and retaking Mosul would be a major setback for IS, all but ending its experiment in statehood.

"IS simply has too many enemies with the world arrayed against it," said Aymenn al-Tamimi, a jihadism expert at the Middle East Forum.

Tens of thousands of anti-IS forces are involved in the operation to retake Mosul, where the jihadists have an estimated 3,000 to 4,500 fighters.

World leaders and military commanders warned that -- despite signs that early progress in the Mosul offensive was faster than predicted -- the battle could be long and difficult.

After clearing towns and villages on the outskirts of Mosul with air support from a US-led coalition, Iraqi forces are expected to besiege the city before breaching it.

Up to one million people could be forced to flee as a final assault nears and many will need shelter, an emergency the unprecedented scope of which is causing concern in the aid community.

Only a few dozen families have fled Mosul since the start of the operation, aid workers say. Iraqi forces are too far from the city to meet escaping civilians.

"They are being held there against their will. We have not seen any change in the last day of people leaving or fleeing."

Many civilians have been able to flee the wider Mosul area to safer areas, with some desperate enough to seek refuge in neighbouring war-torn Syria.

"Thousands of desperate Iraqis are fleeing to a filthy and overcrowded Syrian refugee camp in an effort to escape the Mosul offensive," the Save The Children aid group said Wednesday.

Brexit turns to 'Bregret' in UK