A protester holds up a large caricature of Prime Minister Najib Razak during the Bersih rally in Kuala Lumpur on Saturday. (Bloomberg Photo)

Malaysians clad in the yellow of the reformist Bersih campaign flooded Kuala Lumpur for the second time in 15 months to vent their anger over allegations that billions of dollars were looted from state investment fund 1MDB, Najib's brainchild.

Speaking to a crowd of at least 20,000 in the shadow of the Petronas Towers, Mahathir, 91, accused Najib of stealing public money and said Malaysia was "controlled by thieves".

"Time has come for us to topple this cruel regime. Najib is no longer suitable to be the prime minister. He is abusing the law," Mahathir said.

Malaysia has been gripped since last year by the 1MDB scandal, which has sparked investigations in several countries. Najib, 63, and 1MDB deny wrongdoing. 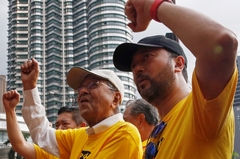 Former prime minister Mahathir Mohammad arrives to speak to a rally by the pro-democracy group Bersih in Kuala Lumpur on Saturday. (Reuters Photo)

But the US Justice Department -- which has filed lawsuits to seize assets it says were purchased with stolen 1MDB money -- says the fund was pillaged in an audacious campaign of fraud and theft that involved an unnamed "Malaysian Official 1".

A Malaysian cabinet official has since admitted that individual was Najib.

Few expect him to be toppled anytime soon.

Najib on Friday condemned Bersih as an opposition plot "to unseat a democratically elected government".

Tensions in the Muslim-majority country rose in the rally's run-up due to threats by the "Red Shirts", ethnic-Malay rightists who support Najib, to disrupt the demonstration, but no clashes were reported.

Amnesty International called the arrests "the latest in a series of crude and heavy-handed attempts" to silence dissent.

"We hope to see Najib removed and charged in court."

Bersih, which means "clean" in Malay, is an alliance of scores of NGOs and civil-society groups that staged several protests over the years for electoral reform, but has now shifted focus to 1MDB.

In August 2015, it drew even larger crowds for two days of peaceful demonstrations over 1MDB.

1MDB has fuelled gloom among progressives and reform advocates who had already accused Najib of reneging on earlier promises to eliminate graft and end the 59-year-old ruling coalition's repressive tendencies.

Critics say Najib is lurching toward autocracy and trampling rule of law to stifle the scandal as elections loom within 18 months.

Mahathir's participation in Bersih's 1MDB demonstrations -- he also showed up last year -- underlines how the scandal has upended Malaysian politics.

Mahathir ruled with a firm grip during his own term from 1981 to 2003, championing the ruling United Malays National Organisation (UMNO).

But he has quit UMNO in disgust over 1MDB and formed a new opposition party.

On Saturday he sanctioned further protests against Najib, despite dealing harshly with demonstrators while he was in power.

"We should not be afraid to show our opposition to the government," Mahathir, wearing a yellow Bersih shirt, told the crowd.