GUATEMALA CITY - The world's first vaccine against dengue, a mosquito-borne virus that causes fever and pain and can be fatal, will go on sale in Guatemala within weeks, the French company making it said Tuesday. 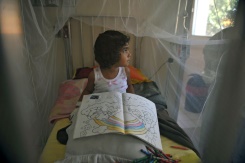 Guatemala has recorded 114,000 dengue cases since 2005, and 132 deaths, according to the WHO's Pan American Health Organization

Regional executives of the firm, Sanofi Pasteur, presented the Dengvaxia vaccine in a news conference in Guatemala's capital and said it was indicated for people aged 9-45 in endemic zones.

The three-dose vaccine, which took 20 years to develop, became commercially available late last year after it was proved to be effective against the four types of dengue.

Thus far, it is approved for sale in the Philippines, Brazil, Mexico, and El Salvador.

According to the World Health Organization, reported dengue cases have greatly increased since the mid-1990s and stood at 3.2 million last year. In 2013 there were 9,000 deaths, mostly in poorer countries.

Based on the registered cases and the viral disease's spread, the WHO estimates that up to 100 million people globally are infected, a quarter of them needing treatment.

Asia has the most infections, followed by Latin America and Africa.

Guatemala has recorded 114,000 dengue cases since 2005, and 132 deaths, according to the WHO's Pan American Health Organization.

Merrick Garland, the man who could put Trump in court