KUALA LUMPUR - Aung San Suu Kyi must step in to prevent the "genocide" of Rohingya Muslims in Myanmar, Malaysia's Prime Minister Najib Razak said Sunday as he mocked the Nobel laureate for her inaction.

The leader's remarks diverged from usual Asean non-interference policies and analysts say the protests are a "smokescreen" for the embattled leader.

Addressing a 5,000-strong rally in Kuala Lumpur, Mr Najib said the Myanmar government must stop the bloody crackdown in its far west that has sent thousands of Rohingya fleeing, many with stories of rape, torture and murder.

"What's the use of Aung San Suu Kyi having a Nobel prize?" Mr Najib asked a raucous crowd. "We want to tell Aung San Suu Kyi, enough is enough ... We must and we will defend Muslims and Islam.

In a counter-protest in Myanmar, more than 100 people gathered at the Yangon City Hall with flags, and heard speeches demanding that Mr Najib stop trying to pressure Myanmar over the Rohingya issue.

It was the second protest in Yangon in two days. 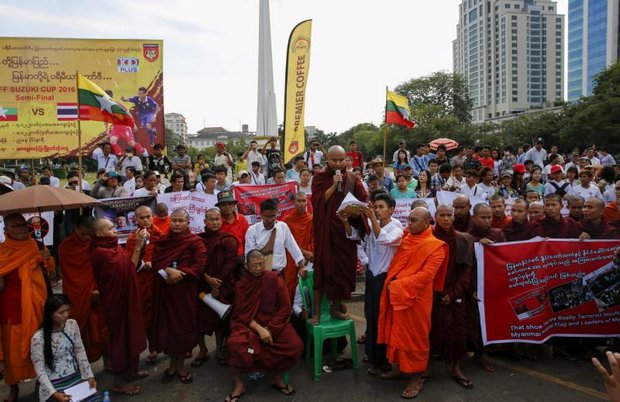 "The Bengali people who brand themselves Rohingya are not Myanmar citizens," Parmaukkha, a nationalist monk, told a small group of supporters protesting outside Malaysia's Yangon embassy on Saturday afternoon.

"The one who is encouraging terrorism is the Malaysian Prime Minister (Najib Razak), he is also a terrorist," he added.

More than 10,000 Rohingya have fled to Bangladesh in recent weeks, the UN said on Wednesday. Arrivals in Bangladesh have told of horrifying stories of gang rape, torture and murder at the hands of Myanmar's security forces. Myanmar has denied allegations of abuse, but has also banned foreign journalists and independent investigators from the area.

Last month Muslim-majority Malaysia summoned the Myanmar ambassador, while around 500 Malaysians and Rohingya marched to the embassy in the capital carrying banners denouncing the "genocide".

A senior minister has called on Asean to review Myanmar's membership, while a strongly worded statement from the foreign ministry on Saturday accused Myanmar of engaging in "ethnic cleansing".

The top US diplomat for East Asia, Daniel Russel, said the escalation of violence risks inciting jihadi extremism in Myanmar and Bangladesh and called on neighbouring countries, including Malaysia and Indonesia, to resist the urge to stage protests that could further stir religious passions.

Mr Najib said the persecution of the Rohingya is an insult on Islam. He said he had asked Indonesian President Joko "Jokowi" Widodo to stage a similar rally in Jakarta to put pressure on Myanmar, because he said the charter of the Asean, to which all three countries belong, ensures the protection of human rights.

The Malaysian government-led protest marks a departure from the long-standing policy of non-interference by Asean members in each other's affairs. But analysts said Sunday the issue is a convenient smokescreen for Mr Najib, who is fighting allegations he took part in the looting of billions of dollars of public cash through state fund 1MDB. Both he and the fund deny any wrongdoing.

James Chin, director of the Asia Institute at the University of Tasmania, said Mr Najib "is there [at the rally] to boost his standing as an Islamic leader", with a general election looming.

"Najib is looking for anything to make him look good and the Rohingya issue is simply a tool," said Bridget Welsh, a Malaysia politics expert with Turkey's Ipek University. She added that if Mr Najib's government really cared for the Rohingya, they would "reexamine their own treatment of the community within Malaysia".

Malaysia may be a beacon for fleeing Rohingya but many have said they end up in a precarious and stateless limbo and suffer marginalisation.

Nobel winner hits out at UK, France over Channel migrants