VIENTIANE: SET-listed Siam Cement Group (SCG), the country's biggest cement producer, says construction of its factory in Laos will soon be finished and could begin commercial operation in the first quarter of next year. 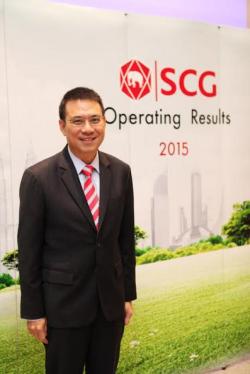 "SCG is now focusing on plans to increase investment in Laos in order to expand its customer base. Laos will be central to our plans for further expansion into the region," he said.

"The Lao economy continues to grow as the government invests in several infrastructure projects to develop the country. We see a great opportunity to sell more cement and building materials in Laos," he said.

Mr Roongrote said 50% of the output from the plant in Laos is for domestic consumption and the rest is for export to Thailand's Northeast.

The costs of transporting products from Laos to northeastern Thailand are lower than the logistics costs of moving them from the Central region to the Northeast.

He said total cement consumption in Laos averages 400,000 tonnes a year and SCG expects demand to grow by 6-7% next year due to state investment in infrastructure projects.

Currently, the domestic cement market is dominated by Lao Cement Co, a joint venture between the Lao and Chinese governments with a total capacity of 200,000-300,000 tonnes a year.

SCG started investing in Laos 14 years ago when it opened its first local cement and building materials trading company.

Other investments in Asean include 5 billion baht to double its annual cement production capacity in Kampot, Cambodia from 900,000 to 1.8 million tonnes.

In Indonesia, SCG has invested 11 billion baht in a cement plant in Sukabumi, West Java with an annual capacity of 1.8 million tonnes.

In Myanmar the company invested 12 billion baht in a cement factory in Mawlamyine with an annual output of 1.8 million tonnes.

Total cement production capacity in Asean is expected to reach 30.5 million tonnes over the next five years, he said.

"Our focus is on the Asean market, which tends to grow very fast. As a result, the company is seeking opportunities to further expand business in neighbouring countries," said Mr Roongrote, adding that the conglomerate has invested some 100 billion baht in regional expansion over the past few years.

Overall, 2016 revenue from sales of cement and building materials amounted to 178 billion baht, down by 3% over the preceding year, while earnings before interest, tax, depreciation and amortisation was 24 billion baht, a drop of 9% year-on-year. Profit declined 10 billion baht, a 22% drop from the year before.

For the whole group, SCG posted a net profit of 14.1 billion baht in the third quarter, a 57% increase year-on-year.

SCC shares closed on Friday on the Stock Exchange of Thailand at 480 baht, up two baht, in trade worth 660 million baht.