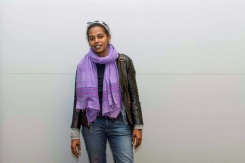 Aida Muluneh returned to Ethiopia nine years ago and set herself the task of changing perceptions of the continent, replacing the outsiders' dominant eye with an African one

The 42-year-old came returned to Ethiopia nine years ago after living in Yemen and Canada and set herself the task of changing perceptions of the continent, replacing the outsiders' dominant eye with an African one.

The Addis Foto Fest, which she founded and which opens its fourth edition Thursday, is one way of doing this, she said.

Her first photography job was with the Washington Post in the United States by which time she was "obsessed" with Africa and irritated by the images of her home country that she saw published in the media, ones that still harked back to the famine of the 1980s.

But Ethiopia had changed, even if portrayals of it had not.

She returned to a country moving at breakneck speed, an Ethiopia "stuck between the past, the present and the future", where a drought-induced food crisis in the countryside co-exists with a shiny new, highline tram for city commuters, where luxurious skyscrapers loom above shanties.

"Ethiopia gives you the full spectrum of humanity. The absolute misery and the absolute joy, and you can see a juxtaposition of all these elements in just a day," Muluneh said.

While there are foreign reporters and photographers who take a broader look at Africa, Muluneh takes aim at "false representations" of the continent by those who focus too heavily on its troubles.

"Africa is being treated unfairly," she said, before arguing that a similar racism can be seen in news images of black people elsewhere in the world.

"When you looks at images coming out of the States, when it deals with black people it's always drug dealers, pimps, killers and so forth. When you look at Africa, again, it's a negative image of the starving Africans, the war-torn."

"We do not need foreign photographers to tell us our story," she said, leafing through some pictures she took at Lalibela, Ethiopia's emblematic tourist site where churches are carved out of rock.

Her black and white photographs capture the details of everyday life, of interiors, faces, and fleeting gestures.

In what is likely Muluneh's best-known series, "Painted Faces", she shows young African women, faces painted in blue, white or bright red with the models presented as artistic subjects rather than being reduced to their "Africanness."

"A lot of my work is about removing time and space. It's looking at the universality. Some don't realise it's Ethiopia... I want to think of the continent in a different way," she said.

Authoritarian Ethiopia does not make life easy for photographers, and Muluneh bemoans the absence of a photographic culture, in which many are left with no option but to shoot weddings for a living.

Hostility towards photographers is common, from government and security forces to ordinary folk.

"Photography is always looked at with suspicion. I can just be shooting a wall and someone will come and ask me, why are you taking photos of this wall?" Muluneh said.

When she sends her students to Mercato, a large open air market in Addis, the young photographers are frequently harassed by police and traders alike.

"You need authorisation for everything. And an authorisation given by the ministry of communication is not recognised by the police. Which make no sense."

Putting on the photography festival in Ethiopia is never easy. Prints have to be made in Nairobi, and sponsors and exhibition spaces are hard to find.

This year is proving especially difficult because of a state of emergency imposed in October after nearly a year of sometimes deadly anti-government protests.

Some have refused to host exhibitions for fear of being associated with what might be construed by the government as political activities.

Despite the challenges, Ethiopian photographers are growing in number and skill: in 2010, there were just four participating in Addis Foto Fest, this year there are 30. And the world is increasingly looking to Ethiopia.

"International visibility is growing. I have seen how talent has changed. It's well on its way, not only in Ethiopia. It's happening across the continent," she said.