Doan Thi Huong, posted glamour-type photos on her Facebook page called 'Ruby Ruby', and many of her Facebook friends were Koreans.

The Vietnamese woman suspected of helping to kill the North Korean leader's half-brother was a keen singer whose Facebook pages featured pouting portraits and pictures of parties.

Four days before Kim Jong Nam was killed at a Malaysian airport, she appears to have posted a picture of herself wearing a shirt emblazoned with the acronym "LOL", similar to the one on the fleeing suspect caught on CCTV cameras.

SUMMARY
The Vietnamese suspect in the death of the North Korean leader's estranged half brother appeared to be wearing an "LOL" shirt like the attacker's in photos on her Facebook page. 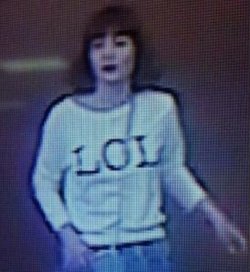 Doan Thi Huong, 28, had posted to Facebook under the name Ruby Ruby, according to her niece, 18-year-old Dinh Thi Quyen.
Her profile picture shows Huong wearing a red cut-out swimsuit at a pool. Other photos are selfies taken in Phnom Penh and in Kuala Lumpur, a few days before two women attacked Kim Jong Nam at the city's airport, and rubbed his face with suspected poison.

The account's first post was made Dec 14 and the last was Feb 11 from an area near the airport. "I want to sleep more but by your side," it said above a photo of Huong with closed eyes and short blonde hair.
Many of her 65 Facebook friends are men, including several Koreans.

Doan Thi Huong worked at an entertainment outlet, according to Malaysian police, who have arrested her over the murder of Kim Jong Nam.

On a rice farm in northern Vietnam, the family whose daughter's details match those from Malaysian police said it rarely knew where she was since she left home a decade ago aged 18.

The last post on a Facebook page in the name of "Ruby Ruby", which family members confirmed to be one of Huong's accounts, is dated Feb 11 from Kampong Besut, Malaysia.

"I want to sleep more but by your side," the post reads above a picture of her, eyes closed and wrapped up in bed.

Malaysian police have said Huong and an Indonesian woman wiped a liquid, containing an as yet unidentified toxic substance, on Kim Jong Nam's face at Kuala Lumpur's budget air terminal on Feb 13.

Huong was described by police as an "entertainment outlet employee", but they did not give details of where she had been employed or what her immigration status was.

Among the links on another Facebook account, which the family also said featured pictures of Huong, was one to the page of the Vietnam Idol talent show. This account was in the name "Bella Tron Tron Bella" - Chubby Bella. There were no posts after November.

A woman bearing a close resemblance to Huong sang on the show as contestant number 67816 on June 3, 2016.

Facial recognition tools give a match to the pictures released by Malaysian police of Huong in custody. 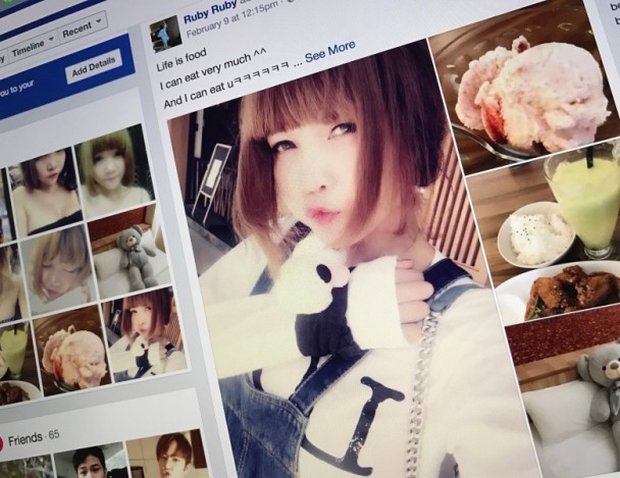 The Facebook page belonging to the accused assassin shows her in an 'LOL' shirt.

The contestant gave Nam Dinh as her home town - the same as Huong's according to passport details from the Malaysian police - but her name was given as Dinh Thi Khuyen.

She left the show in the first round.

A member of the Vietnam Idol casting team declined to comment on the appearance and its spokeswoman did not immediately return a request for comment.

"Can I sing you a song tonight?" she wrote in a Facebook post on March 24 last year. "Reply the fastest and put your phone number in the comment. I will call and sing for you."

Family members mostly work the rice paddies around their home in Nam Dinh, in the Red River Delta southeast of Hanoi.

Huong only visited occasionally, they said, and she was vague about where she had been. She is now 28.

Her father, who fought for the North in the Vietnam War, lost part of his leg in the fighting. Vietnamese authorities had been in touch since the arrest, he said.

"They only say they will support Huong as she is Vietnamese, but did not tell me if she is really a suspect," he told Reuters.

"Even though I am her father I cannot control things that happened when she is out there. I cannot know," said Doan Van Thanh, 63, who works as a security guard in the local market.

Family members said they only found out she was abroad from the media. They had thought she was working in Hanoi.

So far, Vietnamese officials have only confirmed to media that investigations continue and they are in touch with Malaysia.

A South Korean police official said Huong visited the holiday destination of Jeju Island in November for four days and they were looking into what she may have been doing there, but declined to provide further details.

Of 65 friends on the "Ruby Ruby" Facebook page, 27 have Korean names. Fifty six of the friends are men.

One status update on the first Facebook account was posted in the Korean language on March 23 last year, saying "I love you, I miss you", although it did not use words that would be expected for someone familiar with the language.

Most photographs in the accounts are of Huong attending parties, in hotel rooms or portraits. In many she blew kisses to the camera. 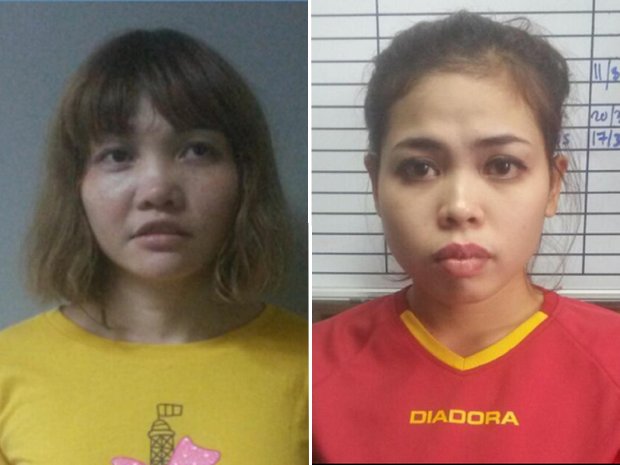 Ms Huong of Vietnam (left) and Indonesian Siti Aisyah are accused of wiping poison on the face of Kim Jong Nam immediately before his death. (Photos via Royal Malaysian Police)

Cosmetics, clothing and fast food shops were among Huong's likes on Facebook. Her place of education was given as Harvard, although the family did not believe that was true.

On Jan 3, Huong posted a picture of a boarding pass from Hanoi to Kuala Lumpur. Family members said Huong was last at home in Nam Dinh from Jan 25-29.

Huong also appears to feature in another online video. Posted last April, it is on the channel of a Vietnamese YouTuber who gets women to kiss him in the street.

The woman in that video matches the one in the latest police photo from Malaysia.

In the video she is shown giggling before a kiss with the man on a park bench.

In the photo, she wears no makeup and stares uncertainly towards the camera.