Policemen stand guard near the body of a man killed during what police said was a drug-related vigilante killing in Pasig, Metro Manila, in February. (Reuters photos)

MANILA - The Philippine police have received cash payments for executing drug suspects, planted evidence at crime scenes and carried out most of the killings they have long blamed on vigilantes, said two senior officers who are critical of President Rodrigo Duterte's "war on drugs."

In the most detailed insider accounts yet of the drug war's secret mechanics, the two senior officials challenged the government's explanations of the killings in interviews.

Almost 9,000 people, many small-time users and dealers, have been killed since Duterte took office on June 30. Police say about a third of the victims were shot by officers in self-defence during legitimate anti-drug operations. Human rights monitors believe many of the remaining two thirds were killed by paid assassins operating with police backing or by police disguised as vigilantes - a charge the police deny.

The two senior officers, one a retired police intelligence officer and the other an active-duty commander, claimed the killings are in fact orchestrated by the police, including most of those carried out by vigilantes. They spoke on the condition of anonymity.

"It is the Philippine National Police doing it," said the retired intelligence officer. "This killing machine must be buried six feet under the ground." He said he was angry about the impact of the killings on police discipline and wanted "to put Duterte on the defensive." Reporters were unable to independently verify if the police are behind vigilante killings.

The president's office and the Philippine police did not respond to questions.

'ONLY THE POOR ARE DYING'

The intelligence officer has authored an unpublished 26-page report on the conduct of the drug war in an effort to organise opposition to Duterte's campaign. The report, titled "The State-Sponsored Extrajudicial Killings in the Philippines," provides granular detail on the campaign's alleged methods, masterminds and perpetrators. The document has been shared with leaders of the Catholic Church in the Philippines and with the government-funded Commission on Human Rights.

Some of the report's accusations against individuals could not be confirmed, so this account does not include the full document. Many of its findings, however, support and expand upon previous investigations of the drug war by reporters and independent human rights monitors.

(The cover page of the report can be seen at this link.

The report claims that police are paid to kill not just drug suspects, but also - for 10,000 pesos ($200) a head - rapists, pickpockets, swindlers, gang members, alcoholics and other "troublemakers."

It also claims that civilian members of the so-called Davao Death Squad, which rights activists allege killed hundreds of people in Duterte's hometown of Davao, were drafted to "augment and assist" the police's current nationwide anti-drug operation.

The report doesn't provide documentary evidence for its accusations, which the intelligence officer said were based on accounts from 17 serving or former policemen, including the commander interviewed. The police commander said he agreed to talk because he was upset that authorities are targeting only petty drug suspects. "Why aren't they killing the suppliers?" he asked. "Only the poor are dying."

The second half of the report is largely political in nature, asserting that Duterte has close ties to Communist forces in the Philippines. Many in the military and police are concerned by what they see as Duterte's leftist sympathies. Since taking office, the president has released Communist rebels from prison to restart peace talks.

The report also calls the drug war a "social cleansing" campaign similar to that launched in Mao Zedong's China, with Duterte aiming to have drug addicts "physically eliminated."

The Commission on Human Rights has reviewed the report and the accounts could open up new leads in ongoing investigations, said chairman Chito Gascon. Church officials confirmed receiving the report as well.

"We should do all we can to follow any lead that could ultimately shed light on these killings with the view to ultimately holding the perpetrators to account," said Gascon.

The fresh claims come amid growing criticism of the drug war. In February, the country's influential Catholic Church called it a "reign of terror." The campaign has also sparked street protests and lawsuits. 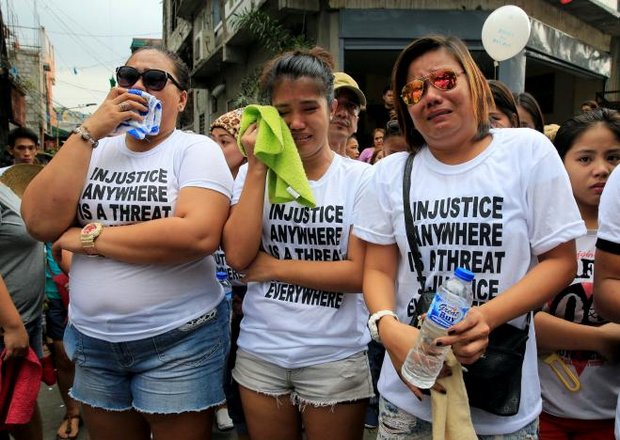 Family and friends of John Jezreel David, 21, cry during his funeral rights after he was shot dead in what police said was an anti-drug operation in February.

Duterte's police chief, Ronald Dela Rosa, halted police operations for most of February after it emerged that an anti-drug unit had kidnapped and murdered a South Korean businessman last year. The killings continued but at a slower pace. On March 6, Dela Rosa announced that the police were resuming their drug operations.

In March, a former policeman, Arturo Lascanas, testified in the Philippine Senate about his role in vigilante-style killings in the southern city of Davao, where Duterte was once mayor. Lascanas was the second Senate witness to link Duterte to the Davao Death Squad. Duterte denies ordering any killings, either as president or mayor.

In a subsequent interview, Lascanas said that for over a decade he was paid for carrying out the liquidation of drug suspects and criminals. In the early 1990s, he said, he was paid 3,000 to 5,000 pesos ($60-$100) for each of the "jobs" he performed. By the early 2000s he was earning tens of thousands of pesos for each operation, he said. Lascanas said he had no documentary proof of the payments. He has since left the country.

In the past nine months, police acknowledge having shot dead more than 2,600 suspects during their operations. They say such shootings occur after suspects open fire on undercover officers trying to catch them dealing drugs.

But these so-called "buy-busts" are actually well-planned executions, said the commander interviewed. The commander said targets are chosen from lists of suspects drawn up by police and local officials, who later coordinate to unplug security cameras in the neighborhood where a killing is planned. According to the report, street lamps are also switched off.

"There is no such thing as a legitimate buy-bust," the commander said. "The dealers know the cops and won't sell to them."

Instead, he said, a team of police operatives will execute the target, who is almost always unarmed, then plant guns and drugs at the crime scene to justify the use of deadly force.

"We have to plant evidence for the legality of the operation," the commander said. "We are ordered to do these operations, so we have to protect ourselves."

The commander said officers put the gun in the dead suspect's hand and pull the trigger with the victim's finger so forensic testing will show that the suspect fired a gun.

Late last year, he said, police crime-scene investigators told their fellow officers to place the guns at a slight distance from the suspects, rather than in their hands, to make things look more realistic.

Most drug suspects in his precinct are shot by rookie cops who are either eager for the experience or nominated by their superiors, the commander said. The superiors refer to this as a "baptism by fire."

Each member of the team is quickly paid according to two factors, said the commander: his role in the killing and the target's value.

According to the report, the cash "reward scales" for drug killings range from 20,000 pesos ($400) for a "street level pusher and user," to 50,000 pesos for a member of a neighborhood council, one million pesos for "distributors, retailers and wholesalers," and five million for "drug lords."

Police officers kill for money, said the commander, but also out of fear: Even the police are afraid of being included on a "watch list" of drug suspects drawn up by police and local officials.

Officials have been killed for not cooperating, he added. He said he was aware of two cases but did not provide details on exactly what happened.

Reuters reported last year that the watch lists were effectively hit lists, with many of those named ending up dead. Another Reuters investigation showed that police officers were killing 97% of the suspects they confront in violent buy-bust operations, the strongest evidence yet that the police were summarily executing suspects.

Officers also cooperate because they know the police force's flawed disciplinary system, which fails to adequately investigate even a fraction of the killings, means there is little chance they will get caught, said the intelligence officer.

One sign of the drug war's success, says the government, is that more than a million users and pushers have voluntarily registered with the police, a process known as "surrendering."

But the commander said police are given a quota of "surrenderers," and fill it by using city ordinances to arrest men who are drunk or shirtless - a misdemeanor known as "half-naked" - then forcing them to register as drug suspects.

Reporters learned of the intelligence officer's 26-page report from him and interviewed two Catholic priests in Manila who said they had encouraged him to compile it. One of the priests said he edited the report; the other said he helped distribute it among a small group of clerics and human rights activists. Both are helping organise opposition to Duterte's drug campaign.

The Church's initial reluctance to criticise Duterte's drug war was prompted by a desire to "give him a chance" when he took office, said one of the priests. But the killings, along with the president's overtures to Communists, made many in the Church feel their values were under attack, he said.

The intelligence officer said he hoped the report would be used as evidence at the International Criminal Court. In October, the Hague-based tribunal said it could prosecute suspects if the killings were "committed as part of a widespread or systematic attack against a civilian population."