Asia's grocery market is the largest in the world, with a predicted 6.3% compound annual growth rate (CAGR) up to 2021, according to the worldwide food and grocery research specialists at IGD. The size of the Asian market is forecast to reach US$4.8 trillion by 2021: equivalent to that of Europe and North America combined. 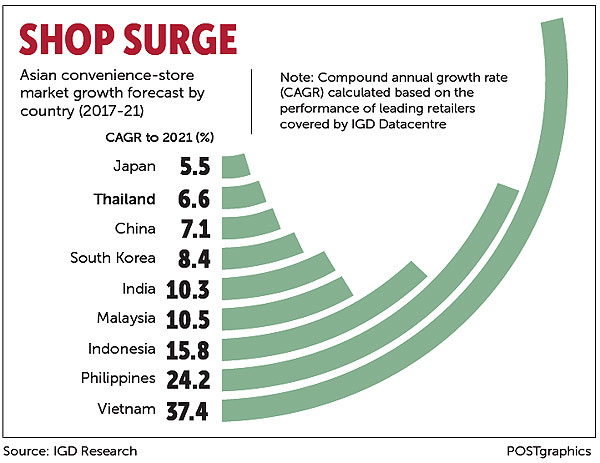 In the convenience store channel alone, IGD is forecasting a high double-digit CAGR over the next four years in Vietnam (37.4%), the Philippines (24.2%) and Indonesia (15.8%), based on the performance of the leading convenience store operators in each market.

IGD has done extensive research and gleaned important insights that are useful to all of us working in the supply chain field across this region. The main reaction we have, however, is that what is presented may not be taking into account the already well-developed base in some of the countries included, especially the likes of Thailand and others that are found lower in the rankings.

Based on our experience, we would say that what IGD is finding and predicting is well founded, but the important observation may be more about where the various countries are in their evolution than about relative growth.

Nick Miles, head of Asia-Pacific at IGD, says: "The retail markets in these three countries are gradually shifting from traditional to modern trade, and there are several factors driving this: a positive economic outlook, a significant increase in GDP per capita, deregulated markets encouraging more foreign investment, and rapidly changing shopper habits.

"Among all the bricks-and-mortar grocery channels, convenience shows the strongest growth prospects in Asia, thanks to rapid urbanisation, a growing young population and greater levels of disposable income."

Discussing the particularly strong growth forecast for Vietnam, Mr Miles says: "Convenience stores in Vietnam have become popular destinations for young consumers to shop and hang out, as the stores provide them with an air-conditioned environment, well-organised shelves and seating areas, high-quality products and, in some stores, free WiFi."

Vietnam, the Philippines and Indonesia share similar characteristics that make their convenience markets particularly ripe for growth, according to IGD:

Store expansion. These three convenience markets are predominantly driven by an increase in store numbers. For example, the number of convenience stores operated by the top five retailers in the Philippines has more than doubled in the last five years. As well, retailers are gradually shifting their focus from the capital to more provincial areas for greater opportunities.

Local players gaining a stronger foothold. Asia's convenience market has traditionally been dominated by Japanese retailers. But there has been more market consolidation and, most noticeably, domestic players such as VinMart in Vietnam and SM Retail in the Philippines have been scaling up their operations and establishing leadership in their local markets.

Mr Miles adds: "Across all the region's key growth markets, we expect to see retailers and manufacturers increasing their investment in convenience, championing innovative new products and formats such as food-to-go, and above all, working collaboratively to ensure they are making the most of these exciting growth prospects."

The Link is coordinated by Barry Elliott and Chris Catto-Smith as an interactive forum for industry professionals. We welcome all input, questions, feedback and news at: BJElliott@ABf1Consulting.com, cattoc@freshport.asia