A high school dropout turned seafood entrepreneur is leading Indonesia's crackdown on illegal fishing, winning plaudits from conservationists and awards as far away as Washington despite her explosive methods.

Her favourite tactic: seizing foreign fishing vessels and then blowing them up to smithereens to send a message to her country's neighbours.

Susi Pudjiastuti, honoured last week in Washington for her ecological work, has led the charge in destroying hundreds of fishing vessels in the past two years as the Indonesian government's minister for maritime affairs and fisheries. Her efforts haven't eliminated a problem that has plagued the archipelago for decades, she said, but they have helped to revive fish stocks and curb smuggling.

"What we actually earn also is respect," she said in the American capital, where she joined other recipients of the annual Peter Benchley Ocean Awards -- named for the author of Jaws. She was cited for her efforts in protecting Indonesia's marine ecosystem, and tackling poachers and organised crime.

"They cannot just do anything anymore," Pudjiastuti added. Whereas 10,000 foreign vessels used to fish in Indonesian waters "like in their own country", she said the new reality was clear: "Not anymore."

For China and others in the region, sensitive politics also are at play. Indonesia's uncompromising approach has irked neighbours whose boats have been caught up in the dragnet for operating in seas plagued by territorial disputes. The campaign may partly reflect Indonesia's desire to show it is in control of its vast territory of 17,000 islands.

Pudjiastuti, 52, has won popularity at home as the campaign's leader, defying initial scepticism when she was tapped as minister in 2014. She had no political experience and hadn't even graduated high school. But she spent three decades as a seafood entrepreneur and knew the business. She also had run her own charter airline, Susi Air, to distribute and export produce.

On taking office, she quickly declared a fishing moratorium for foreign vessels that had often operated under Indonesian flags. "The state's sovereignty has to be upheld," she declared.

And to ram the point home, Indonesian authorities have sunk more than 300 foreign fishing vessels.

In the most recent mass-destruction in early April, Indonesian authorities destroyed 81 empty ships in a single weekend. Most were from Vietnam, the Philippines, Malaysia and Thailand. In March 2016, a large Nigerian-flagged vessel was caught poaching toothfish and, after being evacuated, blown up with great fanfare. Pudjiastuti posed on the beach afterward with navy officials, their fists raised in the air with the smoking boat behind them.

"The visuals and press that comes from her tough practices on blowing these ships up has really helped educate the world," said Sally Yozell, director of the environmental security programme at Washington's Stimson Center think tank, speaking of the global scourge of overfishing.

She recognised, however, the regional frictions of the campaign, which included several incidents last year of Indonesia firing warning shots and seizing Chinese fishing vessels in waters off its Natuna islands.

Pudjiastuti also acknowledged some tensions. She said she briefed ambassadors of neighbouring countries, including China, before the crackdown and sought support. "Poaching is not a part of good bilateral relations," she said last Friday at the Stimson Center.

Indonesian authorities have another 100 seized fishing vessels waiting to be destroying and they are impounding another dozen or so each week, she said. Few are Chinese fishing vessels, which are bigger, faster and often accompanied by their country's coast guard, making it harder to police their activities, she added.

The United States and Australia are providing support to Indonesia, including satellite technology to help surveillance of waters. Indonesia hopes for Japanese technical help, too.

Indonesia isn't among the half-dozen governments contesting control of reefs and islands in the South China Sea, an emerging Asian flashpoint. But it has reason to be wary of China's claims. The so-called nine-dash line that Beijing uses to demarcate its expansive territorial claims extends into Indonesia's internationally recognised exclusive economic zone, or EEZ, that extends 200 nautical miles off its coast.

Pudjiastuti said she is less concerned over the subtleties over Indonesia's stance than her diplomat colleagues. "For me it's more clear. Once it's in my EEZ, that's my fish," she said.

Her moratorium on foreign fishing vessels ended up playing a pivotal role in "Seafood from Slaves" investigation by The Associated Press, which in 2015 found that more than 2,000 foreign fishermen had been enslaved aboard Thai vessels based on the remote Indonesian island of Benjina, catching seafood bound for consumers in the US and other countries.

The moratorium grounded fishing boats that normally would have been almost constantly at sea, giving AP reporters the opportunity to find the enslaved fishermen. She also dispatched a task force to Benjina, rescuing hundreds of the abused workers.

In a moderate Muslim-majority country, where religious conservatives have growing political clout, Pudjiastuti has defied conventional gender roles. She's divorced, smokes and has a tattoo.

She even inspired a character in one of Japan's most reputed manga comic books, Golgo 13. In one strip, a woman in a beret and sunglasses had an unmistakable resemblance to Pudjiastuti. She was depicted overseeing the destruction of fishing boats, blown asunder with a "BOOM". 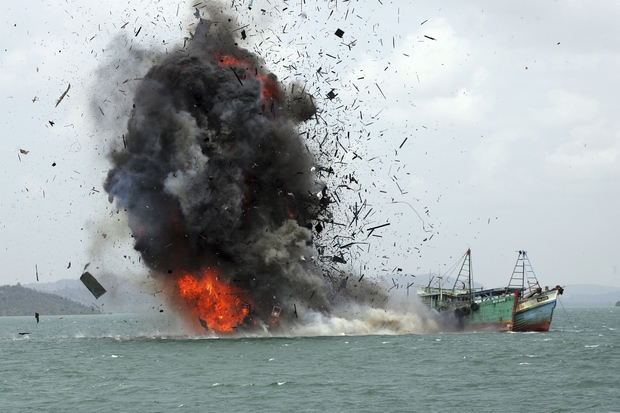 Debris flies into the air as foreign fishing boats are blown up by the Indonesian Navy off Batam Island as part of the country's aggressive campaign against illegal fishing. (AP Photo)