The sighting of Chinese surveyor boats in the Mekong River off Chiang Rai last month set off alarm bells for environmentalists, activists and local villagers who fear the beginning of the end of the ecological richness which is threatened by reef blasting.

China is known to have an ambitious plan to use the river to transport goods from its southern province of Yunnan to Luang Prabang in Laos covering a distance of 890km.

Major obstacles lie submerged under the rapids in the stretches of the international river bordering Thailand in Chiang Khong and Wiang Kaen districts of Chiang Rai, known as the Khon Pi Luang, with a largely untouched ecosystem where some rare birds and fish breed.

China has surveyed and blasted rocky outcrops in the river within its territory in Guan Lei, Yunnan, as well as in some parts of the Mekong bordering Myanmar. The operation has removed the reefs enabling the large 300-tonne cargo ships to ply the river.

But large freight vessels are forced to terminate their journeys in Chiang Saen district of Chiang Rai. At downstream Luang Prabang in Laos, the reefs pose an ever lurking danger under the murky water for river transport. The obstacle-free transport plan conceived by China was addressed by the cabinet on Dec 27 when it approved the Development Plan for International Navigation on the Lancang-Mekong River (2015–2025) as a framework to ensure safety for water transport along the river.

This was followed by a permit granted by the government for a Chinese team to carry out a 50-day survey, supposedly of the reefs, in the Mekong River in Thai territory. Six boats and 40 Chinese crew members took part in the survey, which kicked off on April 19. The survey was commissioned by Second Harbour Consultant Co from China.

One of the boats surveys the water level and the machinery hydraulic system; another examines soil layers, sediment and submerged rocks. Another ship is in charge of ecosystem observation. The rest carry crew members to facilitate the tasks.

The geological aspects of the survey wound down last week and one of the survey boats responsible for the operation has since returned to China, according to a local source.

The survey, however, had environmentalists, local villagers and activists huddled together in fear of an irreparable environmental harm as they believe the clearing of reefs in the rapids could critically damage the fragile ecosystem and the livelihoods of the locals which depend on it.

Some activists took the survey as a sign of the dominant Chinese influence which appears to be spreading while others were apprehensive about a possible alteration of the water course from the reef blasting which could pit Thailand against Laos in a natural border demarcation dispute. 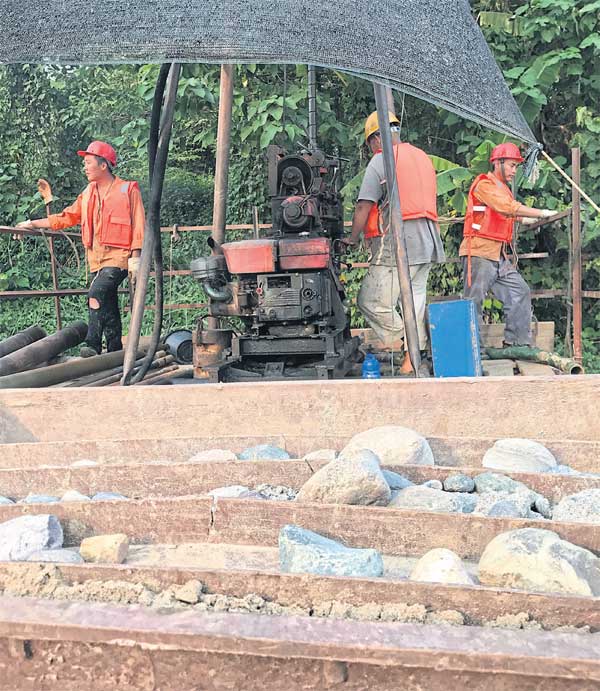 A Chinese boat moored near the banks of the Mekong River off Chiang Rai carries out drilling work to collect soil samples and stones ahead of a reported plan to blast the reefs in the international river to facilitate freight transport. photos by Thammathad Ngamkraboun

"These are not only China's economic tactics, but also its military strategy and a security issue for the Mekong sub-region," said Chainarong Setchua, an expert on sociology and anthropology and environment academic, referring to the importance of the navigation of the Chinese boats in the region.

He noted that China has calculated the immense returns it will gain from delivering cargo by large vessels down to Luang Prabang, from which point goods can be further transported to Vietnam and Cambodia.

As China has blasted the reefs in its territory as well as Myanmar and Laos, no protests appear to have been launched by civic sectors in those countries. Apart from the blasting campaign, China built dams along the river in its territory, which allows it to manipulate the level of the river throughout the year.

In the past, the Chinese-registered 300-tonne cargo ships have found it hard to navigate through the river during the dry season when the low ebb in the water increases the danger of vessels hitting the reefs.

The water control upstream has been blamed for the deterioration of the ecosystem along the river with critics claiming that fish stocks have fallen and native plants dwindled. 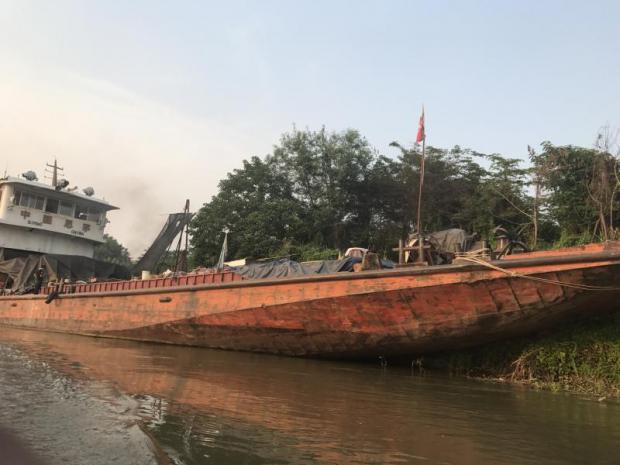 Acting director of Chiang Rai's marine office Suranat Sirichok, in apparently trying to pacify the growing resistance against the reef blasting project, said the Chinese "observation" vessels have nothing to do with the feared underwater rock blasting work, adding they only came to survey the water course.

The survey covers two sections with a combined distance of 96km; one from Chiang Saen to Chiang Khong, and the other from Wiang Kaen to the Pha Dai rapids. The survey, he said, focuses on 15 spots, including Khon Pi Luang and the Kai rapids.

Mr Suranat said the Chinese surveyors were required by law to report their equipment and necessary documents to Thai authorities.

"During the 50-day survey, representatives from the Mekong Riverine Unit, Chiang Rai's marine office, and the Marine Department, are deployed to observe their survey operation," said Mr Suranat said, adding the Chinese surveyors must report their work to authorities on a daily basis.

The survey, however, does not involve any decision to be made as to whether the reefs are to be blasted, he insisted. After this, the environmental impact assessment of the survey operation will be conducted.

Mr Suranat explained the results of the survey will be assessed by Thai authorities, including environmental offices which have demanded an environmental impact assessment be conducted on the proposed reef blasting. He said there are many steps to be completed yet before any decision on the blasting is made.

Marine Department officials, meanwhile, have been sent to meet leaders of local communities to build understanding about the survey.

Thongsuk Intawong, headman of Ban Huay Luak in Wiang Kaen district's tambon Muang Yai, told department officials at a recent meeting that the agency should give clearer information about the survey project. 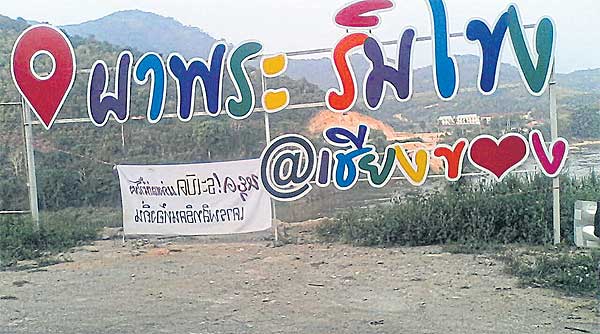 A cloth banner is hung facing a lookout point in Chiang Khong district with a message protesting against the planned reef blasting, saying local people’s rights to conserve the ecology and sustain their livelihoods must be respected.

If mistakes happen, villagers in the three districts of Chiang Rai would bear the environmental, economic and social costs, he said, adding the Marine Department should also make it clear as to whether Thai ships will be allowed to transport goods to Luang Prabang over a distance of 300km.

Another pressing problem could also stem from possible friction between the Chinese and locals, he said.

Many local people are already nervous about the establishment of Chinese businesses, Mr Thongsuk said, explaining that China has invested heavily in banana plantations in the region, which are sometimes accused of discharging chemicals in the waterways.

The presence of many Chinese vessels on a mission, which they feel might be a cause for security concerns, could also drive locals to the point of conflict.

Chinese survey boats appear to dock anywhere they want, Mr Thongsuk said, adding some local residents were convinced the survey boats could be secretly mining minerals from the river bed.

According to the village headman, the large vessels in operation also set off strong waves which rock small fishing boats, putting them at risk of capsizing.

Thanadol Kammawong, kamnan of tambon Lai Ngow in Wiang Kaen, has voiced scepticism as to whether the government has a plan to compensate the villagers or address the unfavourable consequences from the survey project.

Pakaimas Vierra, owner of the Mekong Delta Travel Agency which runs Mekong River cruises, said the cargo transport plan has been on China's agenda for a long time. He said China spared no expense in expanding the trade.

It has built cold storage facilities to keep food arriving by boat at Guan Lei fresh before it is distributed to other parts of China, she said.

"Shipping freight via the highly strategic Mekong River is an effective enterprise attained at a low cost," Ms Pakaimas said, adding the river would become a key economic route for China which, with the help of short overland transport through Laos and parts of Vietnam, can link with the coast of Vietnam.

Early this month, a Chinese tour operator inaugurated a river cruise service carrying Chinese tourists from the south of China to Thailand. More such services might follow if there is a demand for it.

Meanwhile, some National Legislative Assembly (NLA) members were sounding out opinions from various parties about improving navigation along the Mekong River, a source said.

The NLA's subcommittee on security and military affairs has invited representatives from the state and private sectors to air their views on the issue and feedback will be forwarded to the NLA meeting for consideration.