Aung Myo Min Din is a self-made man. Not yet 50, the founder and chairman of the Myanmar hotel chain Amazing Hotels & Resorts is a rags-to-riches story that is, yes, an amazing testament to the fruits of hard labour. 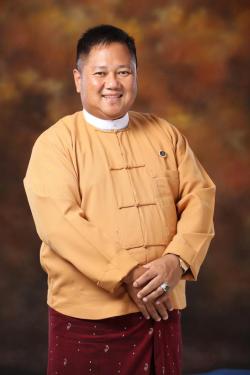 The veteran entrepreneur currently operates 12 hotels and resorts with a total of 530 rooms, along with two golf courses, two restaurants and a travel agency. Projects in the pipeline include one hotel in Yangon with 329 rooms, an 87-room serviced apartment development, a resort at Inle Lake with a first phase of 32 rooms, and a resort on Ngapali Beach. The chain employs a total of 1,339 people.

As a businessman Mr Aung works best when challenged. He opts to take a positive attitude toward the fierce competition in the local tourism industry. "In fact, business in general is booming in Myanmar, so the more business, the fiercer the competition," he tells Asia Focus.

"While we are not complacent, our edge has always been our decades-long experience. That is why it doesn't come as a surprise that our brand continues to do well because our focus is always on customer satisfaction."

Room occupancy projections for 2017 at the company's top-grossing destinations include 68% occupancy for Inle Lake, 65% for Bagan and 88% for Ngapali Beach. For the Chaungtha Beach property, the company expects close to double-digit growth from the domestic market.

For any hotelier, good locations in prime tourist spots never come cheap, and this is especially true in Myanmar where land prices have been rising steadily with rapid economic advancement.

"As land prices rise, so does the cost of developing projects as well," says Mr Aung. "However, land prices have levelled out over the past year or two, making it much more stable to invest in land.

"My predictions for future land prices are that they will continue to fluctuate. The biggest factor that will influence this fluctuation will be the economic situation in the country."

As for what Myanmar needs today to enable it to succeed in the tourism sector, he remarked:

"As we observe a sharp increase in the number of foreign investors who are keen to set up business in Myanmar, I would like to suggest that laws for joint ventures be implemented cautiously.

"The Myanmar tourism industry, for instance, should be protected, to ascertain that local businesses are prioritised so they don't just survive. Further laws should also be implemented to oversee insurance policies for both operators and tourists and the general well-being of both parties."

The 48 year-old entrepreneur's knack for spotting potentially viable properties in the last two decades has been supported by a strong team of team of experts that have largely contributed to the success of his enterprise. Pioneering the local hotel chain with him have been U Zay Ya Min Din, managing director, and Daw Hlaing Hlaing Win, group general manager.

Asia Focus caught up with the ever-busy hotel property developer at one of his latest acquisitions, Amazing Kengtong Resort, where he had come to oversee renovations. Rather candid about sharing his past, he began by recalling how he lost his father, who was only 55, when he was just six years old. His mother was in her early forties when she was widowed, left to tend to seven children, the youngest being Mr Aung.

"After being in the military for many years, my father decided to quit, and had started a small factory business," recalled Mr Aung. "After going through the bereavement period, my mother decided to single-handedly raise us by working hard to provide for our physical and emotional needs. She proved to us, her children, that at the end of the day hard work does eventually pay off. Sometimes soon, other times, one has to wait.

"She has been my pillar of strength, especially, when I first started my business and saw just how difficult it was to keep it afloat."

Revenue generated from the factory, which was being managed by his eldest brother, and supplementary income from a small business in the market, sustained his siblings and their mother, who experienced depression after the passing of the family's original breadwinner.

In retrospect, Mr Aung believes that because he grew up in a socialist environment during the era of isolationist military rule, he seldom felt that his friends had more than he did. When the political climate began to change, and the student uprising for democracy began in the late 1980s, attitudes also began to change.

It was also around that time that Mr Aung decided to get married. He was 22, in his third year in university. Having a positive mindset, he says, helped him to map out a career that would not just pay the bills, but eventually offer Myanmar an opportunity to build its tourism industry.

Mr Aung and his wife began their life together by setting up their own candle manufacturing factory. Within a year, he brought their first family car. He paid 50% of the total amount and was given six months' credit. The sole purpose of purchasing the car was so that he could drive tourists around the city, a job his eldest brother was already doing with good returns.

"I would say I have been blessed with a truly good and understanding life partner," remarks Mr Aung. "She has always supported me. Whatever I have decided to do, she has been by my side. Today my work takes me across Myanmar and abroad, so I am at home just three days in a month. Not once has she complained. She is the most peaceful person in the world, nothing perturbs her."

When he began driving tourists to earn extra income, his wife managed the candle factory. Both husband and wife worked tirelessly, to the point that when their first child, a son, was born she worked until the last day of her pregnancy. "I was in bed by 2am and an hour later she had just returned from the factory because she was in labour and needed me to take her to the hospital.

"I am proud to say that my wife and mother have been an inspiration, both as a businessman and a human being. They have been a pillar of strength in my darkest days." 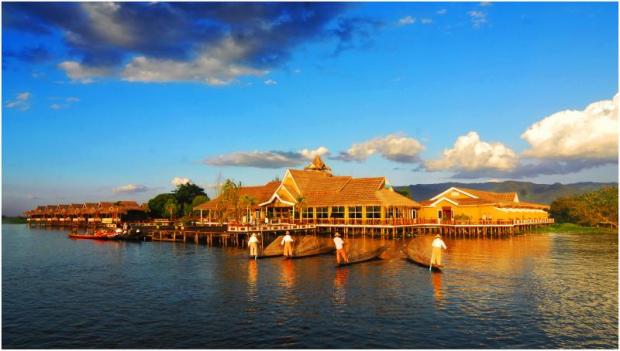 After a year of driving clients to tourist spots in and around Rangoon, as the city country's biggest city was still known, he decided to set up Adventure Myanmar Travel in 1993. He was just 24. To show government authorities that he had enough capital, he asked a friend to lend him the money -- for a day.

"The idea to set up my own company came about very much by chance," he recalls. "In fact it happened because a friend I bumped into while waiting for clients at the airport belittled me by saying that he wouldn't use my services, after having me wait for half a day, because he found my car to be too old.

"The next day I went to see a lawyer to see how I could start my own travel agency. The rest is history as I went on to manage Adventure Myanmar Travel for the next seven years, after which the hotel sector beckoned."

Unlike the candle factory where only Mr Aung and his wife worked to generate an income, maintaining the travel agency meant they would need staff. "I decided to sell the factory so we could have capital to run the business, and after a year we were able to hire 12 staff.

"I named it 'Adventure' Myanmar because while I was driving tourists around, one of my clients mentioned that Myanmar was an 'adventurous' country to travel in. It has been with the support of my staff and clients that our travel agency ranks in the top three in the country today." 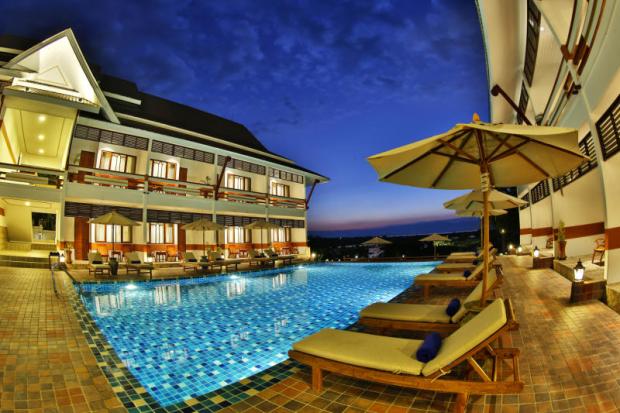 Six years after setting up Adventure Myanmar Travel, Mr Aung decided the time was ripe to purchase his first hotel property in the city of Taungoo, naming it Hotel Amazing Kaytu. He opted to begin his chain here because he saw a dire need for quality accommodation for travellers wishing to stay overnight before leaving for Yangon.

He christened this new unit in his growing company portfolio Amazing Holidays Hotels & Resorts. Not only does the word "amazing" have a special ring to it, he says, but also he was very much in awe of how Myanmar's neighbour used its "Amazing Thailand" tourism campaign so successfully.

Mr Aung admits that for the success of any hotel property development business one requires not just an element of good luck but also a strong team to drive the business to the next level.

Besides himself, his elder brother, U Zay Ya, who has years of experience as a chief engineer in hotels, and Dr Cho Oo, a Myanmar-born architect who completed his education in Japan, have helped the chain achieve its current success and high standards.

"Customer service is at the heart of our business, so I tell my staff to always empathise with our guests. It is not rocket science. Once you realise that empathy can go a long way, your work becomes easier," says Mr Aung from personal experience.

"Staff behaviour has a far-reaching effect on how tourists perceive Myanmar people in general, so I always encourage them to build the qualities of a person who is service-minded. 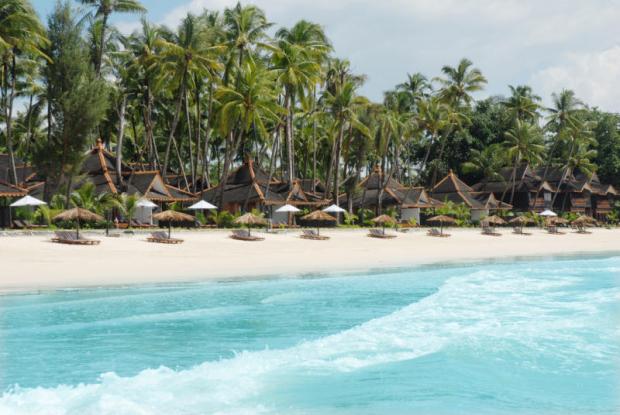 "For my staff to render a memorable experience to our guests, they have to be happy with what they are doing. So without their support and hard work, I don't believe success would be possible."

He also expects his staff to be able to think for themselves and not be afraid to say what they're thinking.

"I have always picked staff who are brave enough to speak their minds. For example, our group general manger, when she came for the interview and told me to my face that she would not work for me for the amount I was prepared to give her as a salary, I was pleasantly surprised with her frankness. I told her to start work tomorrow with a starting salary that she had proposed." 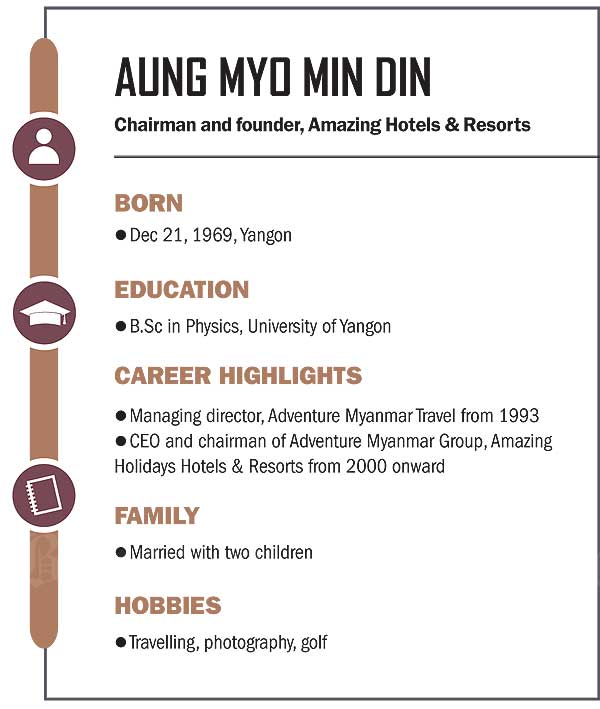