Thailand needs to get tough on illegal migrant workers to meet commitments it has made to the international community to combat human trafficking, Prime Minister Prayut Chan-o-cha says.

The premier was speaking Monday at the annual meeting of the National Economic and Social Development Board (NESDB).

The government's decision to roll out an executive decree on the recruitment of foreigners, which came into force on June 23, has come under fire after it triggered an exodus of unregistered workers back to neighbouring countries. 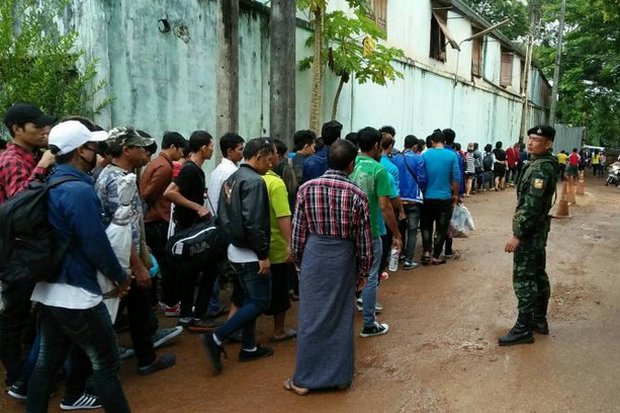 Labour officials estimate about 29,000 migrant workers have crossed back into their home countries since the law came into force.

The law contains harsher punishments for both civil and criminal wrongdoing associated with the illegal hiring of migrant workers, with fines ranging from 400,000-800,000 baht.

Gen Prayut said it was necessary to issue the decree as Thailand needs to adhere to commitments made on the international stage.

The administration needs to execute measures now because law enforcement has been lax in the past, he said.

It is vital that this be done because the country is being closely watched regarding human trafficking, the premier said, adding that Malaysia was also gearing up efforts to deal with the same issue.

His comments follow the release last week of the US State Department's Trafficking in Persons (TIP) report, which kept the country on the Tier 2 Watchlist. The worst category would be Tier 3 which may subject the country to certain restrictions on US non-humanitarian and non-trade related foreign assistance.

Prime Minister Prayut Chan-o-cha: 'Thailand needs to adhere to commitments made on the international stage'

He said a commitment made by four Asean countries states that foreign workers need to be registered at border crossings and that there will be no process to document them within the countries the workers want to work in.

Gen Prayut said between two and three million migrant workers have been registered in Thailand over the past three years but not have had their nationalities verified.

"After entering the country, we just gave them a reprieve and registered them. Those who have yet to verify their nationalities only need to be temporary workers who cannot change jobs," said Gen Prayut.

He also called on the decree's critics not to stage any protest actions, saying the administration will offer a 120-day reprieve for people to adjust.

Deputy Prime Minister Prawit Wongsuwon said the 120-day reprieve will be issued under the powerful Section 44 of the previous interim charter, which has been carried over in the current constitution.

He said a meeting of the Policy Committee on Foreign Workers and Human Trafficking, which he chaired Monday, came up with measures which need to be undertaken under the 120-day reprieve.

The measures will be forwarded to the National Council for Peace and Order (NCPO) before invoking Section 44, he said.

He said the migrant worker exodus had now eased and those who had left need to follow legal procedures before returning to Thailand.

The process of verifying the nationalities of migrant workers must also be sped up and government centres will be set up in five provinces to ensure this happens, he said.

Citing the Section-44 based order, he said punishment under the decree would be suspended and officials barred from enforcing the legislation.

Labour Ministry inspector-general Wiwat Jiraphanwanich said although 29,000 migrant workers have returned home since the decree came into force, the country has welcomed 60,000 foreign workers through agreements with foreign governments.

Mr Wiwat said that during the reprieve period, employers who place foreign workers in positions that do not match those outlined in their work documents can contact local Labour Ministry officials to amend the documents. No extra charge will be levied, he noted.

"The Labour Ministry is preparing a series of measures which should help ease decree concerns and they will be unveiled after Section 44 is invoked," said Mr Wiwat.

Meanwhile, Jate Siratharanon, a spokesman for the National Legislative Assembly (NLA) whip, said the whip's panel would discuss the possibility of enshrining the decree into law before sending a proposal to the NLA for approval.

He said he was uncertain why the government issued the decree right away instead of pushing for an actual law to deal with the matter. The government may have considered this an urgent issue, he noted.

He said officials are looking into claims by Myanmar authorities that Thai officials were trying to extort money from Myanmar nationals streaming back across the border at Mae Sot.