HONOLULU - A human rights complaint has been filed with an international commission to investigate claims of human rights violations against Thais and other Southeast Asians in Hawaii's commercial fishing industry.

Turtle Island Restoration Network told The Associated Press on Wednesday that they filed the complaint last week with the Inter-American Human Rights Commission. The filing asks the panel to determine the responsibility of the US for human rights abuses against foreign workers in Hawaii's longline fishing fleet.

An Associated Press investigation into the seafood industry revealed that hundreds of men are confined to Hawaii boats that operate due to a federal loophole that exempts the foreign fishermen from most basic labour protections.

Many come from impoverished Southeast Asian and Pacific nations to take the jobs, which can pay as little as 70 cents an hour.

The fleet catches $110 million worth of luxury seafood annually.

The petition, which the Pacific Alliance to Stop Slavery and Ocean Defenders Alliance joined, was filed on July 13 with the agency that can make non-binding recommendations to government officials and policymakers.

The Inter-American Human Rights Commission is an autonomous body of the Organisation of American States, which works to protect human rights in the hemisphere. The US is a member of that organisation.

"Hawaii's longline fishery operates in a void of regulation. Government at the state and federal level is failing to ensure even the most basic human rights for these workers," said Cassie Burdyshaw, advocacy and policy director for the Turtle Island group.

Since initial reports, little has changed in the industry that provides ahi tuna and other fish to American and overseas consumers at a premium price. 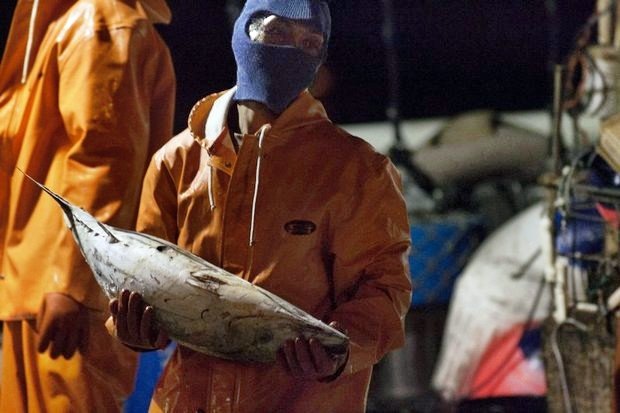 In this March 23, 2016 file photo, a Southeast Asian hired fisherman unloads fish from the Sea Dragon, a US fishing vessel, at Pier 38 in Honolulu. (AP Photo)

Two Hawaii lawmakers introduced measures to create more oversight, but they failed. Both proposals aimed to find ways to get more information about what's happening on the boats and to catch potential problems.

"The lobby was out full force to kill this bill, just as I expected," said state Representative Kaniela Ing, who introduced one of the measures. "It's difficult because there's very few advocacy organisations for these sorts of migrant workers, so their voice is not as loud as the moneyed lobby behind the longline guys."

However, US Customs and Border Protection agents now stamp "Refused" on every fisherman's landing permit. That means they are technically not allowed to set foot on US soil, customs officials said. The state requires fishermen to be legally admitted to the US to get fishing licenses.

The men are not permitted to fly into the country because they do not have visas and must instead arrive by boat.

Attempts to contact Cook and Martin were unsuccessful Wednesday.