Fighting the vicious circle in the Golden Triangle

It took almost four hours to travel along the 160-kilometre mountainous route from Myanmar's town of Tachileik, bordering Chiang Rai, to Kengtung in the eastern state of Shan, but the officials from six neighbouring countries were determined to reach the town in a bid to establish an anti-drug centre in the state known to be a hotbed of drug production. 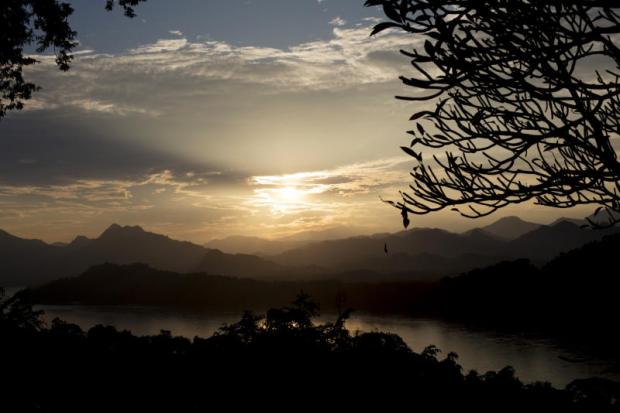 Kengtung is now home to the Safe Mekong Coordination Center (SMCC), jointly formed by China, Laos, Myanmar, Cambodia, Vietnam and Thailand. Myanmar was chosen to hold the chairmanship of the centre from July to September this year.

The officials also launched the anti-drug campaign, called the Golden Triangle Operation, at the event. The Golden Triangle refers to where the borders of Myanmar, Laos and Thailand meet. It has long been known as a key production base for narcotic drugs.

More than 3,000 tonnes of drug precursors and chemicals are believed to be used in the area to make drugs every year. The illicit drugs produced there are known to have caused harm to people across the globe in the past several decades.

According to the United Nations Office on Drugs and Crime's 2015 survey, Myanmar is only second to Afghanistan in the production of opium, the key material used to make heroin.

Most of the drug production in Myanmar happens in Shan State, according to the survey.

In 2015, Myanmar and Laos accounted for 25% of global drug production. The two countries produced 731-823 metric tonnes of opium, which could have been used to make 72.3-73.1 metric tonnes of heroin.

Several precursors and chemicals, including acetic anhydride, are smuggled into the country to manufacture drugs.

Some substances, including ephedrine, pseudoephedrine, safrole, P2P (methamphetamine and amphetamine) and caffeine, are also smuggled into the country to produce methamphetamine tablets (yaba) and crystal meth (ya ice).

It was reported that more than 20 tonnes of ya ice and 500 million of yaba pills were produced in 2015 with the use of at least three tonnes of the drug precursors and chemicals.

These chemicals are also reportedly smuggled into China, other Asean countries and even other parts of the world.

Naw Kham, a Burmese leader of a major drug trafficking network in the Golden Triangle, was arrested by Lao officials and deported to China in 2012, where he faced charges in relation to the robbery and killing of 13 Chinese sailors. The drug ring leader was executed in China in the following year.

After the case, China held a meeting with Thailand, Myanmar and Laos in Beijing in 2013 and created an anti-drug cooperation, called Joint Operation Safe Mekong. It was later developed to become the SMCC. Its coordinating centre is located in Xishuangbanna in the Chinese province of Yunnan. Authorities from four countries work collaboratively towards the task.

A series of arrests of drug traffickers, and seizures of the narcotics and its precursors then followed. This led to the second-phase of the Safe Mekong operation, which took place from January to March 2015, and the extended period between May and September in the same year.

Justice Minister Paiboon Koomchaya later asserted that if the four countries worked together to thwart drug trafficking, the drug problem in the Golden Triangle would be reduced.

In an effort to further suppress drug trafficking, Vietnam and Cambodia were later brought to join the group. The Thai cabinet on Jan 19 last year gave the go-ahead to a three-year anti-drug plan, starting last year.

Naramon Chuangrungsi, deputy secretary-general of the Office of the Narcotics Control Board, said the Safe Mekong operation led to arrests related to 325 drug cases from January to June this year.

During the period, 354 drug suspects were arrested, alongside the confiscation of 94.5 million pills of yaba, 1.4 tonnes of ya ice, 6.7 tonnes of cannabis, as well as 120 tonnes of drug precursors and chemicals.

Ms Naramon said the number of drug arrests has apparently climbed due to anti-drug measures deployed by each country.

"In 2016, we seized 53 million pills of yaba, but as of July 31 this year up to 173 million tablets of yaba have been impounded, which is substantial. Meanwhile, authorities found new drug types along the border in Tachileik, such as ketamine and ecstasy. In the past, they were found to have been ferried from Europe and America," said Ms Naramon.

Information sharing among countries under the Safe Mekong Operation programme led to the crackdown of several narcotics syndicates, including that of Lao drug lords Xaysana Keopimpha and Thao Konprasong Sukkasem, she said. Information was also shared to hunt down drug traffickers believed to have fled to neighbouring countries, added Ms Naramon.

Besides its cooperation with neighbouring >> >>countries to block drug trafficking at the Golden Triangle -- the overlapping mountainous territories near the Mekong known to be a major global drug production site -- the group is also gaining momentum with its anti-drug operations in Shan State and on transnational roads, including the R3B route linking China's Kunming and Jinghong, Myanmar's Mong La, Tachilek and Kengtung, as well as Chiang Rai's Mae Sai district in Thailand.

Anti-drug operations in Shan State and the Mekong are closely related. Myanmar authorities have launched crackdowns on 12 target areas across this eastern region in an effort to cut its drug transport link with the Golden Triangle. Pol Lt Col Khing Soc said drug precursors will be blocked from being sent to the Golden Triangle.

One major drug crackdown in Shan State was recently carried out. On Aug 8, soldiers seized up to 30 million methamphetamine pills and many types of narcotic precursors during their raid on a border drug factory, located about 8km off the town of Tachileik, which is located across from Chiang Rai's Mae Sai district.

The gang was later identified as four Lahu hilltribe suspects -- Chami, 27, Chahae, 52, Chahae 35, and a 15-year-old girl, according to a source from a Thai drug suppression agency.

The suppression not only benefited from an operation to "seal off" the Golden Triangle that would hinder the input of precursors and output of drugs to and from the area, but it also blocked drugs from being smuggled from Shan State into Thailand.

A further inspection of the seized speed pills found a numeric symbol "999" or a small "apple brand" inscribed on packages containing the pills. The "999" mark is especially familiar among Thai authorities who earlier confiscated speed pills from drug couriers in the country, the source said.

Earlier in May, Thai military officers seized 700,000 speed pills from 15 armed drug couriers believed to belong to the Lahu ethnic minority group as they were allegedly trying to smuggle the drugs into Thailand via Ban Phami, a far-flung Thai village opposite Doi Sampi in Myanmar.

More drug confiscations are not just a result of Nay Pyi Taw's increase of up to 50 anti-drug units countrywide. Drug producers are also increasing their supplies in what is described as a "period of golden opportunity", said Phoemphong Chawalit, former chief of the Thai Office of Narcotics Control Board.

It is a good period to produce drugs because, in the future, when Myanmar achieves more peace talks with armed ethnic groups in the country, illegal activities will be hardly committed, he said.

This year Thailand has seized a total of 170 million speed pills -- three times the amount of last year -- partly because of "this oversupply of drugs", Mr Phoemphong commented.

Viewing the success of drug crackdowns in mainland Southeast Asia, Phoutsavath Sounthala, deputy permanent secretary of the Lao National Commission for Drug Control and Supervision, noted that this was the outcome of joint regional efforts under the Safe Mekong Joint Operation.

Since 2013, Lao authorities have seized more drug suspects and a large number of narcotics, he said.

It is the year the Safe Mekong Joint Operation was created to make the international river safer for travel, following an incident in which 13 Chinese sailors were killed in a robbery by a drug trafficking gang in the Golden Triangle, led by Myanmar drug trafficker Naw Kham, in 2011. 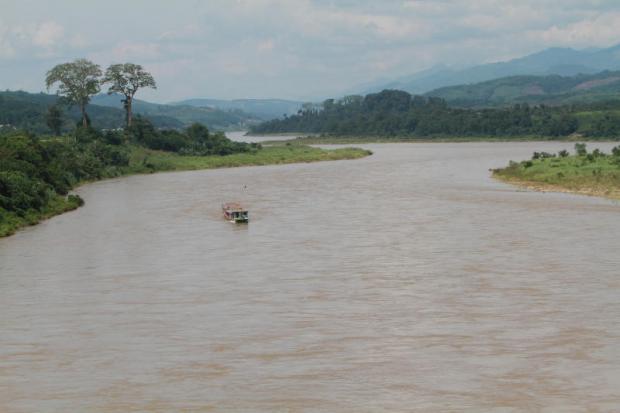 hotspot: The Golden Triangle is where Myanmar, Laos and Thailand meet. The area is known as a major production base for narcotics in the world. PHOTO: Tawatchai Kemgumnerd 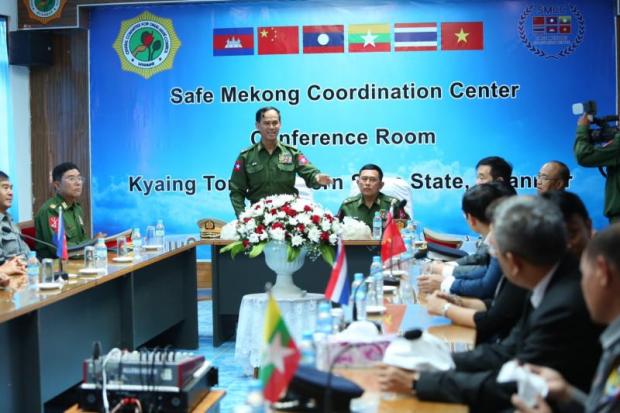 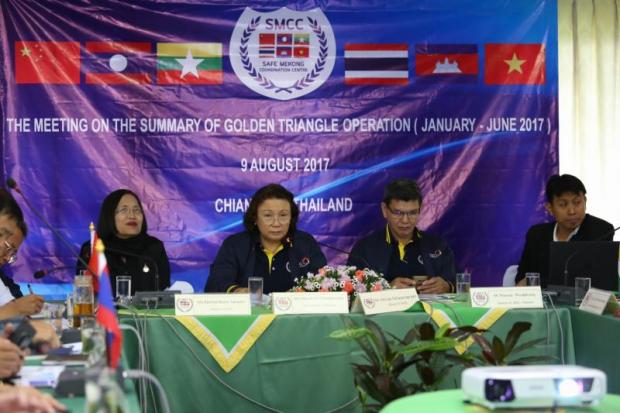 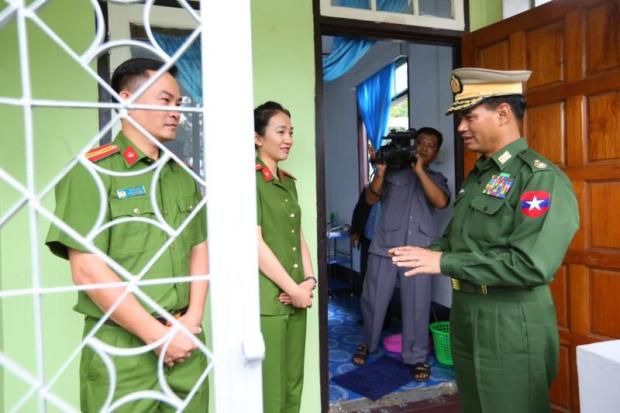 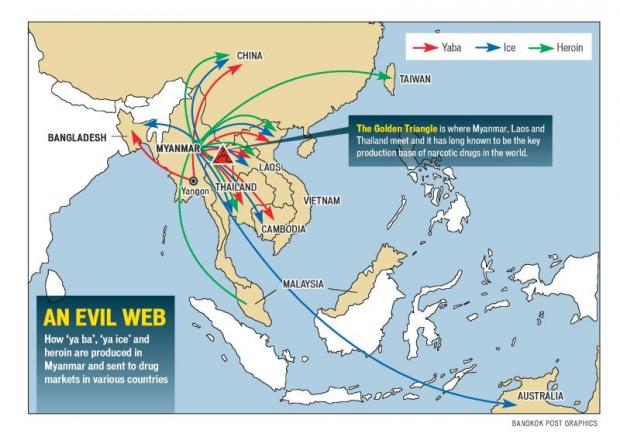 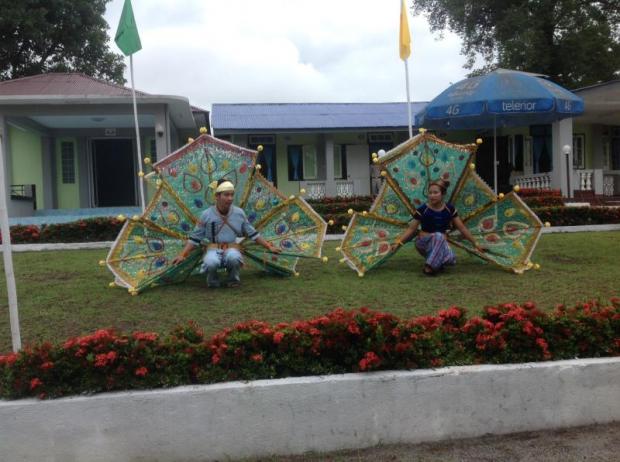