A Bangladeshi boy walks towards a parked boat as smoke rises from across the border in Myanmar, at Shah Porir Dwip in Bangladesh, on Thursday. Nearly three weeks into a mass exodus of Rohingya fleeing violence in Myanmar, thousands were still flooding across the border Thursday in search of help and safety in teeming refugee settlements in Bangladesh. Those who arrived Wednesday in wooden boats described ongoing violence in Buddhist-majority Myanmar, where smoke could be seen billowing from a burning village, suggesting more Rohingya homes had been set alight. (AP Photo)

YANGON: The rights group Amnesty International said evidence pointing to a "mass-scale scorched-earth campaign" across the north of Rakhine state was unmistakably ethnic cleansing, while Myanmar insisted on Friday it was not barring aid workers from Rakhine State, where a counter-insurgency campaign has sparked an exodus of Muslim Rohingya refugees -- although authorities on the ground might restrict access 'for security reasons'.

Nearly 400,000 Rohingya have fled to Bangladesh to escape a military offensive that has been described as ethnic cleansing, and raised fears of an unfolding humanitarian crisis. (Continues below)

US Deputy Assistant Secretary of State Patrick Murphy was due in Myanmar this weekend to voice Washington's concerns and press for greater access to the conflict area for humanitarian workers, the State Department said.

"We don’t block any organisations sending aid to those areas but they might have some difficulty travelling where access is restricted by local authorities for security reasons."

It was unclear whether Mr Murphy would be visiting Rakhine state, and Zaw Htay declined to say whether any request by the US diplomat would be accepted.

The military offensive was launched in response to coordinated attacks on police posts and an army camp by fighters from the Arakan Rohingya Salvation Army (ARSA) that killed a dozen people.

The generals still control national security policy but, nevertheless, Ms Suu Kyi has been widely criticised abroad for not condemning the violence. The campaign against the Muslim insurgents is popular at home.

US Senate Majority Leader Mitch McConnell said on Thursday he had spoken with Ms Suu Kyi and that she said she was working to get aid to areas affected by violence.

Myanmar's minister of social welfare, relief and resettlement, Win Myat Aye, said that for the time being, no independent foreign aid groups were getting access to the conflict area, but he declined to say if they were being blocked.

"These are government-led activities," he told Reuters.

The violence in Rakhine and the exodus of the mostly stateless Rohingya refugees is the most pressing problem Ms Suu Kyi has faced since becoming national leader last year.

Rights monitors and fleeing Rohingya say the army and Rakhine Buddhist vigilantes have mounted a campaign of arson aimed at driving out the Muslim population.

A Reuters photographer on the Bangladesh side of the border said he could see at least 10 huge columns of smoke rising into the sky over Myanmar territory on Friday. (Continues below)

UN Secretary-General Antonio Guterres and the UN Security Council have urged Myanmar to end the violence, which he said was best described as ethnic cleansing.

Myanmar rejects such accusations, saying its security forces are carrying out clearance operations to defend against ARSA, which the government has declared a terrorist organisation. It has accused the insurgents of setting fires.

The rights group Amnesty International said evidence pointing to a "mass-scale scorched-earth campaign" across the north of Rakhine state was unmistakably ethnic cleansing.

"The evidence is irrefutable -- the Myanmar security forces are setting northern Rakhine state ablaze in a targeted campaign to push the Rohingya people out of Myanmar. Make no mistake: this is ethnic cleansing,” said Tirana Hassan, the group's crisis response director. (Continues below) 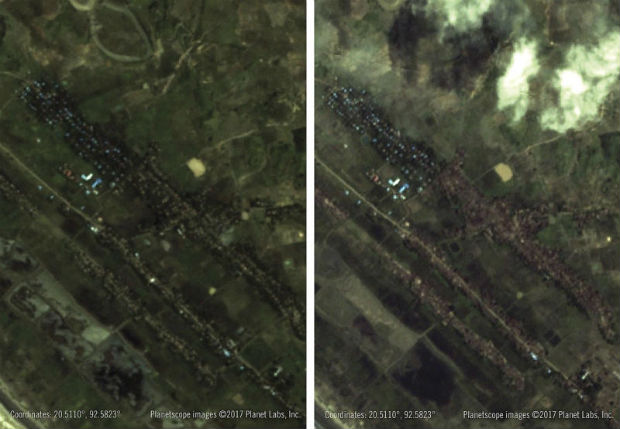 This combination of satellite images provided by Amnesty International/Planet Labs shows a comparison of Aug 27, 2017, left, and Sept 11, 2017, right, which Amnesty shows burned homes of Rohingya Muslims in the village of Inn Din, northern Rakhine state, Myanmar. The human rights group released a new analysis of video, satellite photos, witness accounts and other data that found over 80 sites were torched in Myanmar's northern Rakhine state since an Aug 25 militant attack on a border post. (Amnesty International/Planet Labs via AP)

The group said it had detected 80 big fires in Rohingya areas since Aug 25, and while the extent of damage could not be verified, due to access restrictions by the government, "they are likely to have burned down whole villages".

It said it also had credible reports of Rohingya militants burning the homes of ethnic Rakhine and other minorities. About 30,000 non-Muslims have also been displaced.

The insurgents have declared a month-long unilateral ceasefire to enable aid groups to help but the government rejected it saying it did not deal with terrorists.

The government has accused some aid groups of helping the insurgents with food supplies.

The aid group Médecins Sans Frontières said on Thursday it had reports that its clinics in Rakhine had been burned down and it called for "unfettered access to people in desperate need”.

The United Nations has also called for access to the conflict zone in Rakhine state.

An undated video focuses on the plight of a Rohingya family, as they pull dead babies from the Naf River in Bangladesh pic.twitter.com/bNt3f8uMwW