YANGON/WASHINGTON: The European Union and the United States are considering targeted sanctions against Myanmar military leaders over an offensive that has driven more than 500,000 Rohingya Muslims out of the country, officials familiar with the discussions say.

Interviews with more than a dozen diplomats and government officials based in Washington, Yangon and Europe revealed that punitive measures aimed specifically at top generals were among a range of options being discussed in response to the crisis.

Nothing has yet been decided and Washington and Brussels may decide to hold off for now, the sources said. There are also discussions about increasing aid for violence-riven Rakhine state.

The active discussion of sanctions – not even on the table a month ago – shows how the dramatic exodus of Rohingya Muslims from Myanmar's northwest is putting pressure on Western policymakers to take action.

While much of the outcry overseas has focused on Nobel laureate and Myanmar's national leader Aung San Suu Kyi, few Western diplomats see an alternative to her leadership. Suu Kyi does not control the military, which still wields considerable power under Myanmar's army-written constitution.

The EU Foreign Ministers Council will discuss Myanmar on Oct. 16, although officials do not expect any move on sanctions that soon. Danish minister for development cooperation, Ulla Tornaes, said that Copenhagen had been working to get the crisis on the agenda, "with the wish to put further pressure on the military". 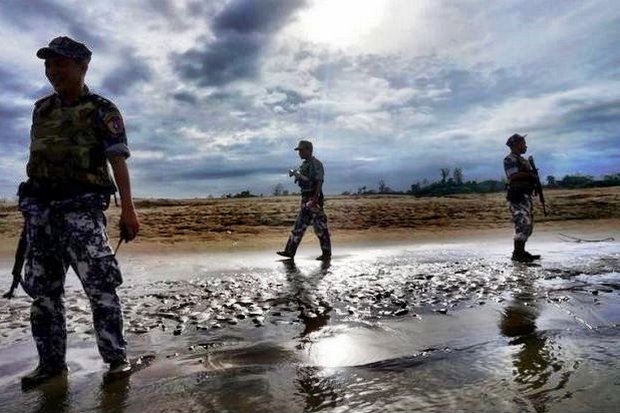 Myanmar troops patrol the Bangladesh border area where an estimated 500,000 Rohingya have fled in the past six weeks. (Reuters photo)

Such sanctions - if decided on - would likely entail US asset freezes, bans on travel to the United States, prohibitions against Americans doing business with them and other unspecified penalties. Washington was moving cautiously as it consulted with governments in Europe, Japan and Southeast Asia, the US officials said.

A senior Yangon-based European diplomat also said Western countries were coordinating their response to the crisis and were in agreement that it was the military, and specifically the commander-in-chief, who needed to be targeted in any punitive action.

Any punishment was likely to be symbolic at first to allow room for further talks, Yangon-based diplomats said, giving the example of formally banning the army chief, who over the past year visited Brussels, Berlin and Vienna, from further travel to Europe.

Western diplomats admit their leverage is limited: compared with China, whose ties with Myanmar have warmed since Suu Kyi took office 18 months ago, US and European investment and military engagement with the country are small.

They are also wary of action that could hurt the wider economy or destabilise already tense ties between Suu Kyi and the army.

The United Nations is pressing for increased humanitarian access to other parts of Rakhine, where hundreds of thousands of Rohingya remain. How Myanmar responds to calls for increased aid, the investigation of alleged atrocities or repatriation of refugees would be a key consideration in deciding what action to take, US and EU diplomats in Myanmar said.

"We can pile political pressure, look into financing we have in Myanmar. We have humanitarian aid, as well as development aid ... the European Commission won't invest in the development of Myanmar if the conditions, including security, are not there," said a Brussels-based EU diplomat who follows Myanmar.

"There is also the arms trade embargo and we discuss regularly whether we should reward the reforms in Myanmar and look at gradual easing of that, or the opposite." 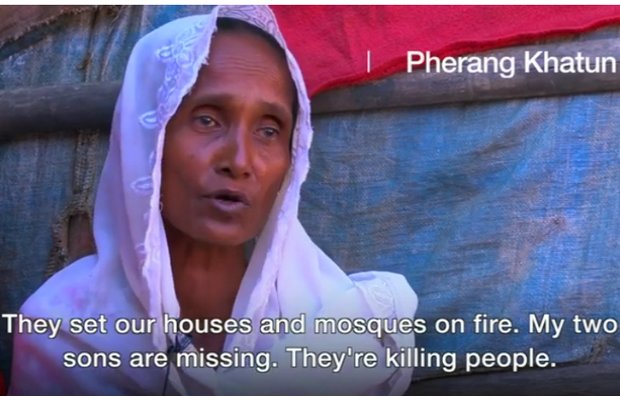 Testimony by refugees inevitably settles on actions by the Myanmar military as the force that decided the Rohingya to flee. (Video grab)

EU economic sanctions on Myanmar were lifted after the army stepped back from direct rule of the country in 2012, beginning the democratic transition that brought Suu Kyi to power last year, but an arms embargo in force since the 1990s remains. The United States removed most sanctions on Myanmar last autumn. It too has kept an arms embargo in place.

One Washington-based US official said that, while there was no firm deadline, Washington hoped to have a plan of action on Myanmar in place by the time President Donald Trump travels to Asia for a series of summits in the first half of November.

The administration wanted to send a strong message to Myanmar's military, but was concerned that too drastic action could allow China to expand its growing diplomatic and economic influence in the country, the official said.

There is little support in the administration for the re-imposition of broader economic sanctions, the official added.

The White House declined comment on internal deliberations on the Rohingya crisis.

In another sign of pressure building on Myanmar, New York-based diplomats said the Organisation of Islamic Cooperation (OIC) in the UN General Assembly was pushing for a human rights resolution on the country.

Last year the EU announced that for the first time in 15 years it would not introduce a resolution at the General Assembly's Third Committee, which focuses on human rights, condemning Myanmar's record - rewarding it for progress.

The European bloc could revive the resolution in the current session, taking on board the OIC draft and broadening it out beyond the Rohingya crisis, one diplomat in New York said.

Diplomats said some members of the UN Security Council were exploring whether the 15-member body could agree a formal statement, or even a resolution, calling for an end to the violence, full access for aid and the safe return of refugees.

However, Myanmar has said it was negotiating with China and Russia, which have veto powers in the Security Council, to protect it from any possible action. China and Russia have both expressed support for the Myanmar government.

Myanmar's relations with the UN have grown increasingly testy since the discovery of World Food Programme-branded biscuits at a suspected militant camp in July prompted the government to accuse the UN agency of supporting the insurgents, forcing it to shut down its operations in Rakhine.

Myanmar is stalling on accepting a plan by the UN to upgrade the UN country head to the more powerful rank of Assistant Secretary-General (ASG) when its current top official, who is due to be rotated, is replaced.

"We'll be fine with anybody if all member states have an ASG assigned. Not just us," he said.