Fight to save key Mekong rapids not over
World

Fight to save key Mekong rapids not over

A fisherman guides his boat through the Khon Pi Luang rapid in the Mekong River in Chiang Rai. (Photo by Pienporn Deetes)

Environmentalists have pledged not to lower their guard against attempts to clear rapids on the Mekong River for better shipping navigation.

Advocates for the river's protection said they feel relieved after a plan to blast away the Khon Pi Luang in Chiang Khong district in Chiang Rai has been put on hold by security concerns. The Thai government is worried that the altered landscape could affect the undemarcated borderline on the Mekong between Thailand and Laos.

But Somkiat Khuangchiangsa, the coordinator of the Rak Chiang Khong Group, said the issue has not been put to rest -- bids to clear the Khon Pi Luang could come back anytime after the two countries settle on the Mekong demarcation.

"We will continue to raise public awareness on its importance through forums and academic research papers," he said.

Chinese engineers plan to clear rapids and islets in the river to enable ships up to 500 tonnes to sail from the Chinese southern border to Myanmar, Thailand and Laos, bolstering trade with China's southern neighbours. The four-nation plan is to give larger vessels access to the Lao city of Luang Prabang.

The clearance of the rapids has been undertaken in stages. Now ships weighing 100 tonnes can cruise along the river all year round, but 250-tonne vessels can pass the Khon Pi Luang only when the water level of the Mekong is high.

Passage for 500-tonne ships would require further clearance, and the Khon Pi Luang is the biggest obstacle. It comprises a group of rapids and small islets stretching about 1.5 kilometres along the river in the two districts.

Environmentalists regard it one of the most important rapids in the upper part of the Mekong basin, both for ecological reasons and because many people's livelihoods depend on the river.

"The plan to clear the Khon Pi Luang is only deferred. If they can get rid of it, bigger ships can go all the way (to Luang Prabang)," Mr Somkiat said. 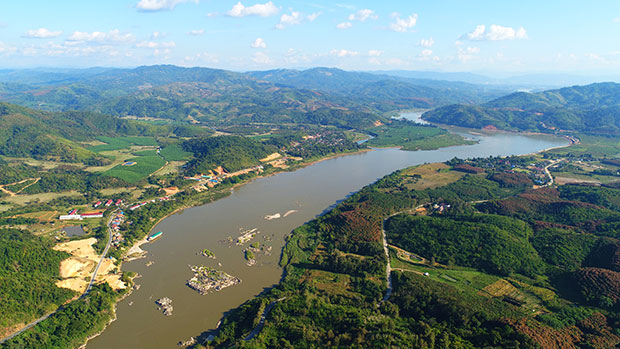 An aerial view shows the Pha Kan Tung, a group of small islets, which is part of the Khon Pi Luang rapids. (Photo by Sommai Iewprasert)

With or without the rapids, residents along the river in Chiang Khong and neighbouring Chian Saen districts already feel the pinch -- hydropower dams in China now control the water flow of the Mekong downstream instead of seeing it run naturally. The dams also block sediments useful for marine resources.

The number of fishing boats in the two districts has dropped to 246 from 1,200 in the past, according to the Rak Chiang Khong group.

The Xayaburi dam in Laos will further impact the livelihood of people in the lower Mekong basin - comprising Thailand, Laos, Cambodia and Vietnam - after it begins operation in the next two years, since it could obstruct fish from swimming upstream to lay eggs.

The dam's design includes fish ladders and a tunnel for fish to swim upstream through the dam to lay eggs, but ecologists are not convinced it will work.

"People in the northeastern region relying on fish in the Mekong and its tributaries realise what could happen to them," Pairin Sohsai, a coordinator of the International Rivers Network, told a Mekong forum at Sakon Nakhon Rajabhat University on Tuesday.

Vietnam, which is the last country downstream before the Mekong flows into the South China Sea, is experiencing ecological changes at the Mekong Delta, according to Nguyen Thi Hong Van, a researcher of the Vietnam Rivers Network.

Less sediment has been seen and seawater has crept higher into the delta, said the researcher, who conducted an extensive environmental impact study on the delta.

"Sediment is the natural fertiliser for Vietnamese farmers, especially the poor, in the delta," she said.

She blamed the reduced sediment on the rising sea level and the dams upstream which regulate the water flow and obstruct the flow of sediment into the delta.

The Mekong Delta is known as the rice bowl of Vietnam -- the most important rice-growing area for local consumption and exports to other countries.

The Mekong branches into nine rivers when it reaches the delta, making the area fertile.

With more dams to be built in the Mekong and its tributaries in the future, Ms Van expects Vietnam to face further hardships, and urged for a solution acceptable to all sides before the damage to the delta is irreversible.

"Countries in the Greater Mekong Subregion must find sustainable solutions to solving the problems of hydropower development and water resource management in the Mekong River," the researcher told the forum.