Phnom Penh airport trains to be ready by April
World

Phnom Penh airport trains to be ready by April

The service will be free of charge for the first three months of operation. (KT photo by Chor Sokunthea)

The new railway line from the Phnom Penh train station to the airport will be launched before the Khmer New Year in April, according to the Ministry of Public Works and Transport.

In addition, passenger ships from Prek Phnov to Phnom Penh and Takhmao, in an effort to resolve traffic congestion, will also be completed.

Minister of Public Works and Transport Sun Chanthol said the ministry is constructing the track that links the train station to Phnom Penh International Airport, according to Khmer Time.

Three train engines from Mexico will be used for passenger transport, with each train able to hold 100 passengers.

“I will make every effort to ensure the railway from Phnom Penh to the international airport is completed before the Khmer New Year,” Mr Chanthol said.

“I would like to announce that after its completion, it will be open for people to use or test for free for three months, including the transportation by waterway.” The railway expansion project saw protests in July when local residents were told to move 15 meters from the road. 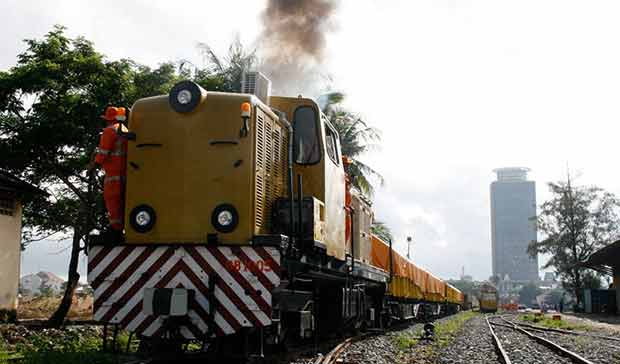 Trains will be ready by Khmer New Year in April. (KT photo by Chor Sokunthea)

According to data from the Ministry of Public Works and Transport, three million vehicles were registered in 2016, including 500,000 cars and 2.5 million motorbikes.

Mr Chanthol also confirmed the number of new imported cars to Cambodia to be about 30,000 to 40,000 units per year.

The estimated number of people living in Phnom Penh was more than three million as of early 2016, according to figures provided by the municipal governor.

A Kabab 2 commune resident living near the airport, said she would use the train service, but wanted to see how effective and timely it was first.

“I will use it, but will wait to see if it is acceptable,” she said. Mr Chanthol said the government is connecting the northern railway out of Phnom Penh to Poipet city before the end of 2018 to connect the Cambodian railway to Thailand.

The government is also looking to expand some national roads from two to four lanes soon to facilitate travel and cargo transportation, he added.

BMA allows 13 kinds of business to reopen in Bangkok

The Bangkok Metropolitan Administration has approved the reopening of 13 kinds of premises, including game arcades and shops, from Friday, but 13 other kinds of business will remain closed, including pubs.

A fire broke out Thursday at India's Serum Institute, the world's largest maker of vaccines, but a source said production of the coronavirus vaccine was not affected.