A power plant has been operating in the Dawei Special Economic Zone since 2015 but many substantial investments expected at the site have still not materialised. Photo: Jiraporn Kuhakan

With elections scheduled for three years from now, a significant boost to economic development and job creation will be essential to restore confidence in the civilian administration led by the National League for Democracy (NLD).

Government insiders, though, remain enthusiastic about the economic prospects for the future, with Finance Minister Kyaw Win predicting strong growth in the next few months. He likened the economy to an airplane on the runway about to take off.

But seasoned business observers like Maung Maung Lay, the vice-president of the Union of Myanmar Federation of Chambers of Commerce and Industry (UMFCCI), fear such optimism needs to be tempered. "Take-off [and landing] are the hardest and most dangerous times for planes: headwinds, a damaged runway, and so on," he told Asia Focus recently.

For the past two years the government has appeared rudderless, lacking a coherent strategy and failing to deliver what the NLD senior patron, Tin Oo described immediately after the election in late 2015 as the "democracy dividend". 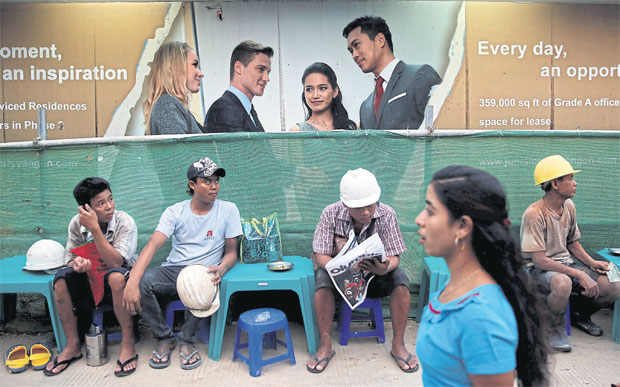 A woman walks past construction workers resting at a street food stall in Yangon. Photo: Reuters

The government is besieged by endless problems: a stagnant economy, a precariously poised peace process, escalating violence in the western Rakhine and a bureaucracy seriously incapable of getting things done. Where most of these issues are concerned, the civilian leader and her ministers seem slow to recognise the problems and almost incapable of solving them.

Business and investment confidence has certainly plummeted. Three authoritative reports published at the end of last year should be a clarion call to action, say people in Myanmar's business community.

The second Myanmar business confidence survey conducted by Roland Berger in partnership with the UMFCCI in the latter half of last year shows a significant drop in short-term business sentiment: from 73% a year ago to 49% this year. The drop is consistent across local companies -- from 76% to 50% -- and international firms -- from 71% to 49%.

Both local and foreign business executives attribute this largely to the government's lack of a clear economic plan and policies, in the view of three out of four companies interviewed.

The second Business Confidence Survey by EuroCham Myanmar found similar sentiment among its members. More than three quarters of the 70 European companies active in Myanmar that responded to the poll rated the business environment as poor or needing improvement, compared with 67% in 2016. They identified regulatory issues, legal uncertainty and the lack of a qualified labour force as the biggest challenges.

But despite their current frustrations, most businesses remain optimistic about the mid to long-term outlook. Half of the executives surveyed by Roland Berger expect the business landscape to improve rapidly over the next 12 months, while 88% of companies remained optimistic about the country's longer-term prospects.

"Personally I have great hope for the coming three years as the [country's] leaders have tuned in and recognised that economic success could lead to prosperity and peace for the people," said Martin Pun, a leading Myanmar businessman and a senior executive with the SPA Group. "With changes in some of the important laws and bylaws, allowing more flexibility for investors to work with, the horizon does look brighter."

This feeling is almost universal among Myanmar businessmen, foreign investors and financial analysts interviewed by Asia Focus in the last few weeks.

"I am very optimistic about the business opportunities in Myanmar going forward, and believe that many of the challenges we have seen during this new administration are what we should have expected at this stage of Myanmar's evolution," said Ola Nicolai Borge, a Norwegian lawyer and business consultant, who has been based in Myanmar for many years.

But the continuing violence in Rakhine, which has resulted in some 630,000 Rohingya Muslims fleeing into Bangladesh, is a major dampener on business confidence, especially among foreign investors, and will remain so until the situation there is resolved.

"Clearly the terrible events in Rakhine will have an impact on investment, especially from Western countries, North America and Europe primarily," said Sean Turnell, an Australian academic and economic adviser to the Myanmar government. "Potential investors from such countries will worry about possible future sanctions, consumer boycotts and other affects that may damage brand integrity."

But it is the tourism and garment industries that are likely to take the most significant hit, according to Vicky Bowman, director of the Myanmar Centre for Responsible Business (MCRB).

"Tourism will be adversely affected by the situation in northern Rakhine -- not only to Rakhine but to the country as a whole -- even though all major tourist sites are unaffected by the violence. The images in the news of burning villages have undoubtedly affected visitor bookings, particularly from Europe and the US," she told Asia Focus.

She also fears that the garment sector may suffer, as there is less enthusiasm for the Made in Myanmar label on hangers nowadays, "and this is an industry that can quickly change supplier countries".

But in spite of these unfavourable factors affecting the outlook, foreign direct investment (FDI) has increased substantially, according to Aung Naing Oo, director-general of the Directorate of Investment and Company Administration (DICA) and secretary of the Myanmar Investment Commission (MIC). By the end of December it stood at US$5.16 billion compared with only $3.8 billion in the same period last year. Most of this investment came from East Asian countries and Asean members, he told Asia Focus.

"The MIC projects FDI for 2018 to still top $6 billion, despite the problems of Rakhine," he said. "However, we need to make sure the Rakhine issue is resolved expeditiously. Otherwise it is likely to have an affect on attracting investment, the longer the dilemma lasts."

He remains upbeat, however, pointing to expected developments this year such as the full integration of Myanmar into the Asean Economic Community (AEC), the China-backed Belt and Road initiative and the possible start of more construction on two long-stalled special economic zones, namely Dawei and Kyaukphyu.

Nevertheless, some investors may already be holding back, said the World Bank in a report issued last month.

"Other investors are clearly concerned with reputation aspects of entering Myanmar at this time. Still, my impression is that there are plenty of foreign investors, including western investors, ready and willing to invest in strong projects in Myanmar."

Significantly some 30% of FDI in the past year has actually gone into manufacturing, especially in the garment sector -- a threefold increase, which augurs well for future economic growth, according to Maung Maung Lay of the UMFCCI. He admits, though, that there will be a two- to three-year lag before it has a significant impact on employment and gross domestic product (GDP).

"There is likely to be continued strong, but not spectacular growth in the short term," said Prof Turnell. "Political events allowing, I think we will see more rapid growth. Some strong fundamentals have been put in place over the last year, and more will be laid this year, and from these we should expect real growth."

These include: the new Company Law, which will take effect from August, and could be a great stimulus to foreign equity investment in local firms; a reformed state-owned banking sector that should be a significant provider of funds, especially injecting much-needed capital into agriculture; significant investments in public infrastructure -- rural roads and specially electricity generation -- as well as some market-integrating infrastructure related to the Belt and Road.

Other Myanmar executives and analysts agree with this assessment. Among them is Keith Rabin, a business consultant and energy specialist focusing on Asia with long experience in Myanmar.

He points to the new companies law, "and an overall recognition that policies, planning and practices must be revised to realise Myanmar's strong potential, and to achieve a sustainable economic takeoff in 2018 and beyond".

ATHENS: A strong earthquake struck the Greek island of Crete early Monday, killing a man who was working in a church that collapsed and injuring 11 others, officials said.

Afghan saffron boss says Taliban will not silence her