Banners are displayed outside the court in Yangon, Myanmar, on Wednesday. Reuters journalists Wa Lone and Kyaw Soe Oo were arrested on the outskirts of Yangon city on 12 Dec 2017 by Myanmar police for allegedly possessing classified police documents. (EPA photo)

Prosecutors in Myanmar formally charged two journalists from the Reuters news agency on Wednesday with violating the Official Secrets Act, signalling the case will go forward despite international condemnation.

Wa Lone and Kyaw Soe Oo were arrested Dec 12 after police accused them of violating the colonial-era law by acquiring “important secret papers” from two policemen. The police officers had worked in Rakhine state, where security forces are blamed for rights abuses against Rohingya Muslims that sparked the exodus of some 650,000 people to Bangladesh. 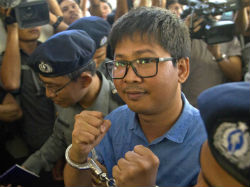 Dozens of journalists wearing black waited outside the court Wednesday to protest the arrest of their colleagues, who were led into the court smiling and giving the thumbs up sign despite heavy handcuffs on their wrists.

“This is unacceptable,” Wa Lone said from the back of a police truck after the brief hearing. “I want to tell you that that they are charging us like this to stop us finding the truth. Their actions are wrong and unfair.”

The journalists' lawyer, Than Zaw Aung, said the prosecutor formally indicted the pair and they now face up to 14 years in prison if convicted.

Than Zaw Aung said he appealed for the two to be immediately released on bail, but the judge said he would review that request and rule at the next hearing on Jan 23.

“We are still far from the verdict,” he said.

Rights and media groups have criticised Myanmar's new civilian government led by Nobel Peace laureate Aung San Suu Kyi for continuing to use colonial-era laws to threaten and imprison journalists. Such laws were widely used by the military junta that previously ruled the country to muzzle critics and the media.

Reuters Editor-in-Chief Stephen J. Adler said he was “extremely disappointed” by the charges and again called for Wa Lone and Kyaw Soe Oo to be released immediately.

“We view this as a wholly unwarranted, blatant attack on press freedom,” Adler said in a statement. “Our colleagues should be allowed to return to their jobs reporting on events in Myanmar.”

Their detention has caused an international outcry. After they were detained, UN Secretary-General Antonio Guterres said the arrests showed how press freedom was deteriorating in Myanmar, while US Secretary of State Rex Tillerson called for their immediate release.

“A free press is critical to a free society - the detention of journalists anywhere is unacceptable,” former President Bill Clinton tweeted Monday. “The Reuters journalists being held in Myanmar should be released immediately.”

A free press is critical to a free society—the detention of journalists anywhere is unacceptable. The Reuters journalists being held in Myanmar should be released immediately.

The Committee to Protect Journalists also condemned Wednesday's decision to charge the journalists.

“These criminal charges represent a giant step backward for press freedom in Myanmar,” said Shawn Crispin, the group's senior Southeast Asia representative. “The jailing of journalists shows that Aung San Suu Kyi's government, despite its democratic mandate, is following in the repressive footsteps of her military government predecessors. And by targeting a high-profile news organisation like Reuters, it shows no journalist is safe to report on sensitive stories in Myanmar.” 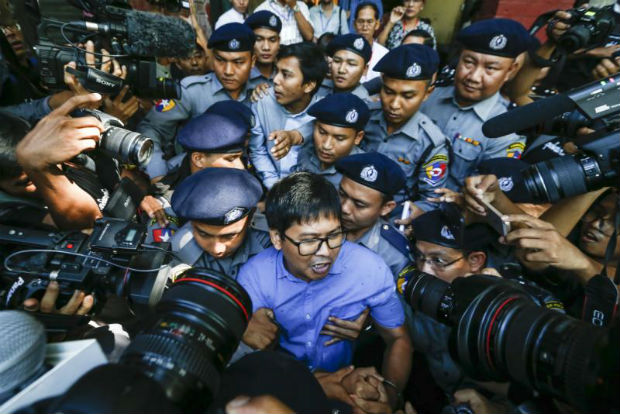 Reuters' journalists Wa Lone (centre, front) and Kyaw Soe Oo (centre, back) are escorted by police as they leave the court after their first trial in Yangon, Myanmar, on Wednesday. Reuters journalists Wa Lone and Kyaw Soe Oo were arrested on the outskirts of Yangon city on 12 December 2017 by Myanmar police for allegedly possessing classified police documents. (EPA photo)