In this Nov 8, 2015 file photo, Myanmar's National League for Democracy party leader Aung San Suu Kyi is crushed by the media as she arrives at a polling station to vote in Yangon, Myanmar. (AP photo)

When five Myanmar journalists were sentenced to decade-long prison terms for reporting the alleged existence of a military-run chemical weapons factory in Myanmar a few years ago, Aung San Suu Kyi -- then an opposition lawmaker -- condemned the harsh punishments as "very excessive".

The journalists, from the now-defunct Unity publication, had been convicted for violating the nation's Official Secrets Act -- the same colonial-era law now being levelled against a pair of Reuters reporters who are facing a staggering 14 years behind bars each.

"It's not that I don't accept a concern over national security," Suu Kyi told supporters during a July 2014 rally, according to an article published at the time in the Irrawaddy, a local media outlet. "But in a democratic system, security should be in balance with freedom."

When "the rights of journalists (to report) are being controlled," Suu Kyi said, the very notion of democratic reform in Myanmar is "questionable".

Three and a half years on, the thinking of Suu Kyi, who now heads the government, has apparently changed dramatically. Rather than champion the press, she has presided over an administration whose courts have aggressively pursued legal charges against dozens of journalists, along with other attempts to suppress and discredit the media. 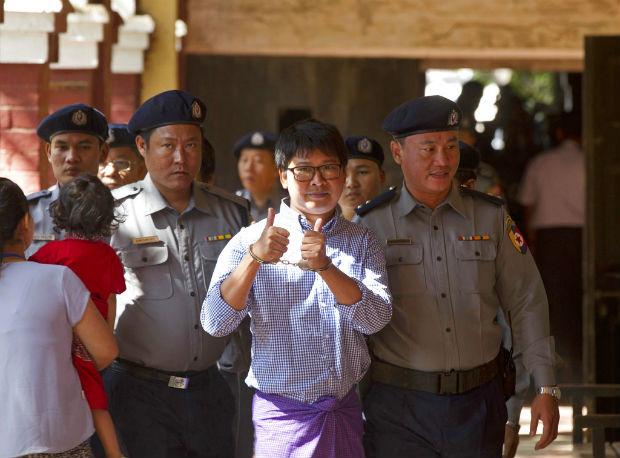 Reuters journalist Wa Lone is escorted by Myanmar police upon arrival at the court for their trial on the outskirts of Yangon, Myanmar, on Feb 1. (AP Photo)

Police arrested Reuters reporters Wa Lone and Kyaw Soe Oo on Dec 12 while they were investigating the massacre of 10 ethnic Rohingya Muslims. But when former UN ambassador Bill Richardson met the Nobel Peace prize laureate this month and brought up the case against the Reuters reporters, it "brought almost an explosion on her part," Richardson said.

Suu Kyi's spokesman, Zaw Htay, has said that Richardson exceeded his mandate by bringing up the issue. Richardson had been invited to the country to participate in an advisory panel on the Rohingya crisis; he withdrew, calling it a "whitewash".

Htay did not answer his cell phone when AP attempted to reach him several times Wednesday for comment.

Hostility against the media, particularly international news agencies covering Myanmar, has risen markedly since a brutal army "clearance" operation began in August immediately after Rohingya insurgents staged an unprecedented wave of attacks. More than 700,000 Rohingya, a persecuted minority widely despised by the nation's Buddhist majority, have been driven into Bangladesh since.

Absolutely horrific. A new report shows how Myanmar troops systematically killed Rohingya Muslims. To make matters worse, the Myanmar military tried to cover it up. Make no mistake: this is genocide. Wake up, humanity. pic.twitter.com/fGiqSOaXXH

They're "doing everything in their power to block the flow of news, to ensure that no damaging information comes to light," said Shawn Crispin, Southeast Asia representative for the New York-based Committee to Protect Journalists.

"They're using legal threats, they're blocking access to areas where alleged abuses occurred, they're making it harder for foreigners to get visas," he said. "They've created a climate of fear among local reporters, too, and the message is clear. If you report critically, you risk going to jail."

"You say they burnt their own villages - why would they do that?"

As the antagonism against foreign media has grown, some agencies pulled reporters from the country. AP correspondent Esther Htusan left Myanmar in late November after threats were made against her life on social media and unidentified men followed her to her Yangon home.

Not so long ago, the mood in the Southeast Asian nation was very different.

When the military, which ruled for half a century, ceded some power to a nominally civilian government in 2011 amid what was widely lauded as a long-awaited transition to democracy, journalists were bursting with optimism. The government abolished censorship in 2012, allowing local media outlets to flourish for the first time in decades. Foreign correspondents were granted visas, enabling them to report on what had been one of the most closed nations in the world.

The Associated Press was among those allowed in. The news cooperative maintained a presence in Myanmar and covered the nation for decades through local correspondents. But in 2013 AP became the first international news agency to officially open a bureau since the transition from military rule began.

The optimism reached its peak when Suu Kyi's party swept elections in a 2015 landslide.

"There was so much hope that local journalists were finally going to be free to report, and Suu Kyi was to be their champion," Crispin said. "But Suu Kyi has become a menace to the media, and she's very much put her individual stamp on this wave" of repression.

At least 33 reporters have been charged with crimes under various laws since Suu Kyi's government assumed office in 2016, according to the local advocacy group We Support Journalists. The numbers are likely higher than during the era of military rule because many more journalists are operating today.

Besides the Official Secrets Act, reporters have been charged for violating the Unlawful Association Act, under which three were detained several months last year for covering a drug burning event organized by a small rebel group. Reporters have also been charged under Article 66(d) of the Telecommunications Law, which broadly defines defamation and carries a penalty of up to three years' imprisonment.

The telecommunications law in particular has been employed to crush freedom of expression, said Maung Saungkha, an independent researcher with We Support Journalists. About 80 other people, including activists and protesters, have been charged under the law. Suu Kyi's National League for Democracy party holds a majority in parliament and has the power to amend or abolish such legislation.

The government has also tried to cast doubt on media reports about the Rohingya. Last month, the AP published an investigation documenting the existence of five mass graves in the village of Gu Dar Pyin that witnesses said were filled with Rohingya corpses slaughtered by army soldiers with help from local Buddhists. The AP investigation relied on multiple interviews with more than two dozen survivors in Bangladesh refugee camps, time-stamped mobile videos and satellite imagery that showed how the entire village had been wiped out.

The government launched its own investigation in response, and in a statement cited local villagers and community leaders declaring that "no such things happened". Security forces, it said, killed 19 "terrorists" and "carefully buried" them.

In an editorial, the state-run Global New Light of Myanmar condemned the AP report, saying "the credibility of the media is lost when they fail to seek the truth and ensure accuracy in their reporting." The editorial, however, did not mention that Myanmar does not allow independent media into northern Rakhine state. The only trips journalists are permitted to take part in are those occasionally allowed by the government, which often deploys minders to monitor them and curtail their movement. 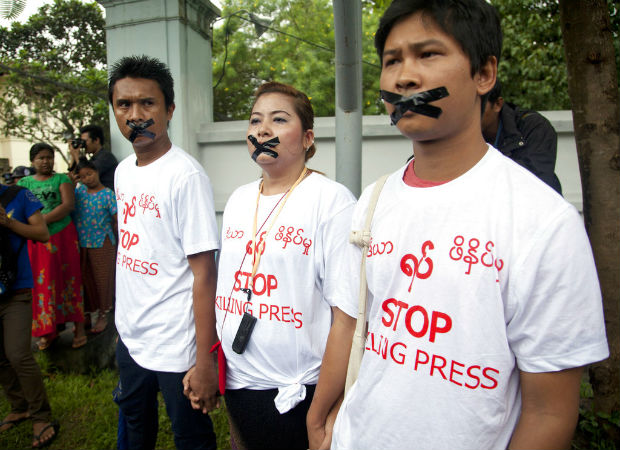 "What the government doesn't understand is how professional reporting happens," Crispin said. "If they want to get the truth out, they need to open everything up, let reporters in, and let them publish what they find ... They're not doing that, and everyone knows they won't have a shred of credibility until they do."

Reporting in such an environment is difficult, but not impossible.

For example, when Rohingya women told of being raped by Myanmar's military, the government dismissed their accounts as "fake rape". But in November, AP reporter Kristen Gelineau documented the military's methodical rape of the Rohingya by talking to 29 women and girls from different refugee camps in Bangladesh, interviewing them separately, extensively and often repeatedly. She found "a sickening sameness to their stories, with distinct patterns in their accounts, their assailants' uniforms and the details of the rapes themselves."

Gelineau also cross-checked the stories wherever possible. The mother of one young girl raped by 10 soldiers said her family had managed to get the girl to a hospital in Bangladesh for treatment. Gelineau examined X-ray documentation of the visit that bore the girl's name and age and the date, and noted deep scarring on her legs where she said soldiers had dragged her across the ground. She also persuaded one doctor to show her his patient files to prove that the women were not making up their stories.

The importance of allowing the media the freedom to do its job was conveyed by one of those women, who had lost her husband, her country and her peace.

"I have nothing left," she said. "All I have left are my words."