The National Holocaust Museum has revoked its top Elie Wiesel (right) humanitarian given to Suu Kyi in 2012. (Video capture YouTube/VOA)

The museum announced Wednesday that the Elie Wiesel Award given to Suu Kyi in 2012 would be rescinded. Museum officials cited her refusal to condemn the mass killings of Myanmar's Muslim Rohingya minority.

A letter addressed to Suu Kyi from the Museum said she had "refused to cooperate with United Nations investigators, promulgated hateful rhetoric against the Rohingya community, and denied access to and cracked down on journalists trying to uncover the scope of the crimes in Rakhine State."

Suu Kyi was the first person to receive the award after Elie Wiesel himself. It is now given annually to someone chosen for great human rights achievements.

Suu Kyi was a Mandela-like figure in Myanmar who spent years under house arrest for opposing the country's military dictatorship. She became an international rallying point and won the Nobel Peace Prize in 1991. Her party won a landslide victory in 2015 and she became state counsellor.

But her international reputation has plummeted over the Rohingya massacres and she has been criticised as an apologist for the purges.

The UN human rights chief in Wednesday called for a new body tasked with preparing criminal indictments over atrocities committed in Myanmar,

Zeid Ra'ad Al Hussein called for an investigation for Myanmar, where other senior UN officials have said the military is continuing to wage a campaign against the Rohingya Muslim ethnic group that amounts to ethnic cleansing.

In his annual report to the council, Zeid restated his concern that "acts of genocide may have taken place" in the Rohingya homeland of Rakhine state.

He called on the rights council to "ask the General Assembly to establish a new independent and impartial mechanism to prepare and expedite criminal proceedings in courts." 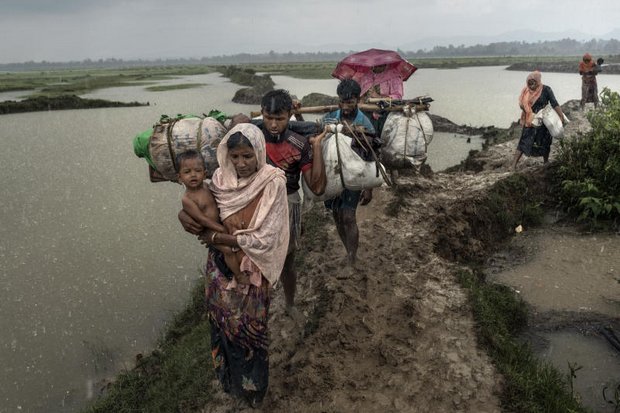 Rohingya refugees head for a refugee camp after crossing the Naf River that separates Myanmar and Bangladesh near Palong Khali. The US Holocaust Memorial Museum has revoked a prestigious human rights award it gave to Aung San Suu Kyi, a Nobel laureate and Myanmar's civilian leader, faulting her for failing to halt or even acknowledge the ethnic cleansing of the Rohingya Muslim minority. (Photo New York Times)

In Dhaka, a senior Bangladesh cabinet minister accused Myanmar of obstructing efforts to repatriate roughly 750,000 Rohingya refugees, saying it was unlikely the displaced Muslims would ever return to their homeland.

Finance minister A.M.A Muhith said the repatriation deal signed between Myanmar and Bangladesh in November would likely fail despite his government's official stance that the refugees must eventually go back.

"I do not believe the Rohingya can be sent back," Muhith, an outspoken minister from the ruling party, told reporters late Tuesday in Dhaka after meeting with a British charity.

"You can speculate that very few will return to Burma. The first reason is that Burma will only take a few and secondly is that the refugees will never return if they fear persecution," he added, using another name for Myanmar.

Officially, Bangladesh insists the repatriation process will go ahead, last month submitting to Myanmar the names of 8,000 refugees expected to return to Rakhine state where the Muslim minority has been persecuted for generations.

But the plan has courted controversy from the outset.

Rights groups and the UN have warned that conditions for their return are not close to being in place.

Refugees living in camps in southeastern Bangladesh have also resisted the idea, fearing they will not be safe if they return to Rakhine.

Close to one million refugees from the persecuted Muslim minority live in squalid camps in Cox's Bazar, having fled successive waves of violence in Myanmar's westernmost region.

Under the agreement, the first of a proposed 750,000 returnees were scheduled to begin crossing the border in late January.

But the process stalled, with Myanmar and Bangladesh blaming the other for a lack of preparedness for the huge undertaking.

Muhith said Myanmar would "take 15 a day when there is one million", referring to the Rohingya in camps strung along the border.

"They (Myanmar) are absolute evil," he added.