Sri Lankan guards escort Buddhist monk Akmeemana Dayarathana (centre) after he was remanded in custody in Colombo on Oct 2, 2017, over his involvement in a violent attack on Rohingya refugees. The monk is accused of leading a violent attack on a UN-protected refugee centre at the Colombo suburb of Mount Lavinia and forcing the removal of 31 Rohingya, including 16 children, to a safer location. (AFP photo)

HONG KONG - Buddhism may be touted in the West as an inherently peaceful philosophy, but a surge in violent rhetoric from small but increasingly influential groups of hardline monks in parts of Asia is upending the religion's tolerant image. 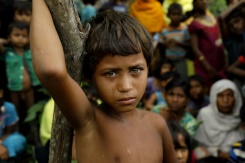 Violent anti-Muslim rhetoric by Buddhist clergy has fed into an exodus of Rohingya from Myanmar that has seen 700,000 people flee violence

And in neighbouring Thailand, a prominent monk found himself in hot water for calling on followers to burn down mosques.

What has prompted this surge in aggressive rhetoric from followers of a faith that is so often equated, rightly or wrongly, with non-violence?

For many in the West, schooled in Buddhism via the beatniks, Hollywood, meditation classes, tropical holidays and inspirational Dalai Lama quotes, the visceral response of these monks can be a shock.

But Michael Jerryson, an expert on religion at Youngstown State University who has just completed a book exploring Buddhism and violence, says throughout history some Buddhists -- like any faith -- have used religion to justify violence.

"There's a common mindset, whether it's Sri Lanka, Myanmar, Thailand... that Buddhism is somehow under threat," he said, describing the latest incarnation of violent Buddhist rhetoric.

"Each area has its own history, its own causes and instigators, but these instigators are also interlinked."

In many recent cases around Asia, this aggression has been targeted toward Muslims.

After the Taliban's destruction of the Bamiyan Buddha statues in Afghanistan and the "war on terror" rhetoric, Jerryson says, warped historical grievances have "collided with recent Islamophobia".

Myanmar's Wirathu has built a following railing against Muslims in incendiary sermons both in person and on Facebook -- which closed down his page in January.

The Venerable W - A Deeply disturbing look at the Burmese Buddhist monk -Ashin Wirathu-special guest Greg Constantine will talk about his experiences in Myanmar. Exhibit at Faultline Gallery.Greg's website:https://t.co/g4JrlTTr5Jhttps://t.co/ces1S6zDnb

While Muslims make up less than four percent of Myanmar's population, Wirathu paints a millenarian portrait of an Islamic plot to eradicate Buddhism.

During the brutal 26-year civil war, the ire of ultra-nationalists among the mainly Buddhist Sinhalese majority was focused on the island's Tamil Hindus.

But after the Tamil Tigers were beaten in 2009, hardliners turned on Muslims, who make up some 10 percent of the population.

Calm returns to Sri Lanka after a state of emergency was imposed in response to anti-Muslim riots that killed three people and wounded 20 others https://t.co/i8vsg4SKUh pic.twitter.com/ugdo53bBoO

Monk Galagodaatte Gnanasara, the movement's most prominent leader, is on bail facing hate speech charges and insulting the Koran.

"The Koran should be banned in the country," he said recently. "If you don't, we will go from house to house and campaign till it is banned."

His movement BBS -- Buddhist Force -- hosted Wirathu and his followers in September 2014.

In Thailand, anti-Muslim hardliners have had less success.

"Subsequently, local monks' ethnic prejudices carry far less weight with the public and state authorities than their counterparts in Myanmar and Sri Lanka," she told AFP. 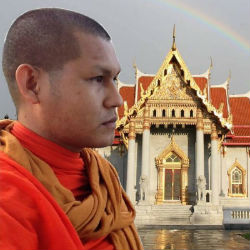 But there have been flashes of tension such as in the country's Malay Muslim-majority south, where a brutal insurgency has killed more than 6,500 civilians in the last decade.

Most of the dead are Muslim civilians, but Buddhist monks have also been targeted by militants, fuelling animosity towards Islam.

Maha Apichart, a young and influential ex-monk, used Facebook to call on followers to burn down a mosque for every monk. He was later defrocked.

"With a couple of very rare exceptions Buddhist monastic groups don't carry out the violence themselves," explains Iselin Frydenlund, from the Norwegian School of Theology, who has written extensively about what she dubs "Buddhist protectionist" movements in Myanmar and Sri Lanka.

"But what they will do is provide the justification for the use of violence carried out by others, be they vigilante groups, civilians, police or soldiers." 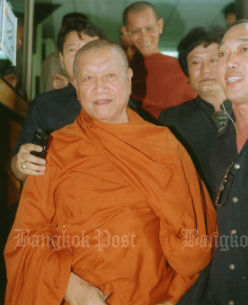 It is not just global Islamophobia fuelling these groups, she adds -- colonial history, globalisation and the advance of secularism play their part.

"People feel they are losing their traditions."

Puangthong Pawakapan, a politics expert at Bangkok's Chulalongkorn University, points to an earlier threat to monks from the recent past -- communism.

During the height of the Cold War in the 1970s, one of Thailand's most prominent right-wing monks -- Kittiwuttho -- famously told followers it was "no sin to kill communists".

Jerryson says he fears the recent religious communalism could spread to vulnerable minorities, such as Buddhists in Bangladesh's Chittagong Hill Tracts.

"By labelling Muslims as adversaries to Buddhism, which historically has not been true, it solidifies the perception that the relationship is adversarial," he warns.

"The damage is being done, there is a breakdown of trust, a building of fears."