BEIJING - Millions of Chinese public sector workers will be exposed to the harsh policing tactics of the Communist Party as President Xi Jinping brings his corruption crackdown to China's sprawling bureaucracy. 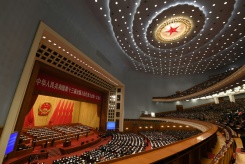 The campaign to clean up the party's pervasive corruption has arguably been Xi's most popular initiative, pressuring its 89 million members to toe the line -- with more than 1.5 million officials punished in the past five years.

Legislators are finalising the creation of a new anti-graft apparatus that will also watch over non-party members -- everyone from managers at state-owned companies to people in administrative roles at schools and hospitals.

In Beijing alone, one of the areas where the new system was established on a pilot basis, the number of people under scrutiny quadrupled to one million, or about five percent of the city's population, officials said.

Further blurring the line between the state and party bodies, the National People's Congress (NPC) on Sunday named CCDI deputy secretary Yang Xiaodu as head of the National Supervision Commission.

The "anti-corruption powers are dispersed," explained one party leader during the NPC, saying the new body would harness and unify anti-graft efforts.

Rights groups worry the new body will institutionalise some of the problems that have led to abuses and even torture of suspects, while vastly expanding the number of people under its purview.

The system has a "veneer of legal legitimacy", said Maya Wang, China researcher at Human Rights Watch (HRW), without "any meaningful improvements to guarantee due process".

Legislators wrote the new supervision commissions into the country's constitution last week and will approve a law laying out their powers on Tuesday.

China's war on corruption has relied heavily on a shadowy, often brutal extralegal justice system known as "shuanggui", allowing investigators to hold party members in unofficial detention facilities until they "confess" to graft.

Xi said last year that the shuanggui system would be phased out and replaced.

But the new law provides for a form of detention called "liuzhi", which rights groups say is a "legal" reincarnation of the shuanggui system and allows graft suspects to be held for up to six months with no provision for legal counsel.

Under liuzhi suspects' family members must be notified within 24 hours of their detention -- except when they may "impede the investigation".

"Liuzhi provides no fair trial protections, not even the basic ones that exist under China's criminal procedures," said Wang.

Chen Qian, 58, a researcher at Yangquan city's national development and reform commission in northern Shanxi province, was one of the first public servants to face investigation by a new supervision commission.

Last year, he was held for almost two months as investigators probed two bribery cases against him.

But when Chen was formally arrested and transferred into China's criminal law system, the number of cases had ballooned to 38.

"The other 36 cases Chen Qian confessed to on his own during detention," his lawyer said while pleading for leniency, according to court documents.

Liu Jianchao, head of the Zhejiang supervision commission, told state media that suspects averaged 42.5 days in detention before being transferred into the criminal justice system.

"We place special emphasis on persuading those under investigation to write their own confessions," Liu said.

- Who guards the guardians? -

Previously led by his right-hand man Wang Qishan, who was named vice president on Saturday, critics say the CCDI also served as a weapon to eliminate Xi's adversaries.

The new supervision commissions will institutionalise that setup, with the investigative organs written into the constitution as independent bodies overseen by the party-led people's congresses.

Rights groups and lawyers warn that it will put the bodies beyond judicial scrutiny, but in China's capital, officials say such independence is necessary to take down powerful officials.

Zhang Shuofu, who leads the Beijing commission, said the new bodies were modelled on an ancient system, dispelling concerns by citing "internal and external oversight".

That oversight relies on the people's congresses which are technically charged with supervising most of China's bureaucracy, but in practice do little.

"Our oversight work has some problems," admitted Zhou Chengkui, a former deputy general secretary of the National People's Congress, in a recent interview with China Law Review.