MOSCOW - As he prepares for his fourth term, President Vladimir Putin is expected to finally make good on his repeated pledges to revive Russia's creaking economy.

While the situation has stabilised since the 2015-2016 recession, growth forecasts are capped at 1-2%, below targets set by the Kremlin. Here are the five main challenges:

Putin made several references to the crucial question of family policy during his campaign.

Russia, which currently has a population of 146.9 million, has lost more than five million inhabitants since 1991, a consequence of the serious demographic crisis that followed the fall of the Soviet Union.

The first generation born in the post-Soviet years, which were marked by a declining birth rate, is now entering the labour market, which is likely to see a shortage of qualified manpower and a resultant curb on economic growth.

This new, smaller generation, is also reaching the age to have children, which has resulted in a further drop in mortality in 2017.

"We will have fewer young people in the next 10 to 15 years, so a young specialist with new skills -- interpersonal and technical, including computer programming -- will be worth gold," former finance minister Alexei Kudrin said recently.

While state pensions are very low, with the demographic decline the system still represents a growing burden for the federal budget.

Putin has said several times that reforms would be necessary but has so far always judged that the moment for them had not yet arrived.

While liberals like Kudrin advocate a gradual increase in the retirement age to 63, tampering with this Soviet-era social benefit may prove unpopular in a country where retirees often have trouble making ends meet with their meagre pensions.

In a gesture for this group who have particularly suffered from the surge in prices in recent years, the Kremlin announced Friday that it would prepare measures to allow pensions to increase faster than inflation.

Putin regularly flirts with foreign investors at economic conferences, promising to improve a business climate undermined by bureaucracy and also, according to his own findings, by sometimes unjustified lawsuits. 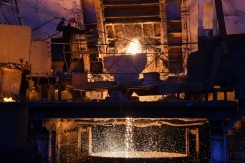 "The need for foreign investment is also the reason why the Kremlin has not retaliated against the recent US sanctions escalation; it does not wish to make it any more difficult for foreign investors to come to Russia."

On Friday, the Kremlin said it had instructed Prime Minister Dmitry Medvedev and central bank chief Elvira Nabiullina to draw up an "action plan" by July 15 to significantly increase the role of investment in an economy still dependent on hydrocarbons.

While investment increased 4.4% in 2017, according to the statistics agency Rosstat, the growth was largely due to large one-off projects such as the bridge being constructed to connect the Crimea or the football World Cup.

The economic model that saw high energy prices fuel meteoric growth during Putin's first two terms in power from 2000 to 2008 has run its course.

Rich in vast reserves of hydrocarbons, Russia is at the mercy of fluctuations in their prices, as shown by the 2015-2016 crisis.

The "economy remains structurally dependent on the commodities sector, which is clearly negative for the growth outlook," according to Alfa Bank.

To wean itself off this dependence, Weafer suggests investing in entrepreneurs and small businesses by making "money for investment and consumption more affordable and more easily available".

As an example of what can be achieved, Lev Jakobson, first vice rector at Moscow's Higher School of Economics, points to "quite impressive growth in the productivity of the agricultural sector", which has broken harvest and export records in recent years.

"The economy is very inefficient. Partly this is the legacy of the Soviet system and partly because of the easy growth coming from the oil wealth in the years 2000-13," said Weafer.

"There are plenty of inefficiencies in the system which, if fixed, could drive strong growth."

Weafer cites the example of the oil sector which, while it was under Ukraine-related sanctions imposed in August 2014 and even as prices plunged, increased output by 740,000 barrels a day.

"The industry was forced to become more efficient and innovative," he said.

To modernise large companies, the government has launched several privatisation plans, but the state's share in the economy has actually been further strengthened in recent years by a triumphant state capitalism that saw the oil company Rosneft grow significantly.