'Diaspora: Exit, Exile, Exodus Of Southeast Asia', an art exhibit on display in Chiang Mai, examines the migratory movements of people in the region since the end of the Vietnam War

An interactive map, Identifying Southeast Asia: Borderless Humanity by Aditya Novali allows viewers to switch on and off different territories of the region.

In Chiang Mai, a mammoth exhibition has come to town. "Diaspora: Exit, Exile, Exodus Of Southeast Asia", currently on display at the MAIIAM Contemporary Art Museum, brings to viewers the different facets and implications of migratory movements in and out of the region since the Vietnam War, all the way to the current crisis concerning the Rohingya.

Born out of meticulous and extensive research, the project headed by curator Loredana Pazzini-Paracciani takes shape through the works of 18 artists of different nationalities and ethnicities whose works discuss borders, sanctuary, mental geography and the curse of "otherness" that characterises many parts of Southeast Asia.

When our minds -- and, at times, our judgement -- become clouded with a saturation of images and information conveyed through news reports, such exhibitions provide a dedicated time and space for deeper reflection. Never didactic, the artists' works are renditions of their own migratory journey -- either forced or voluntary -- or based on collected testimonies and the close observation of everyday life objects -- a map, a coin, a mosquito net. On their own or as an ensemble, they allow viewers to experience rather than to observe, to empathise rather than to simply acquire new facts.

As crucial elements of migration, maps and borders figure heavily in "Diaspora". For there to be a movement from one place to another, notions of geography are necessary to create a distinction between "here" and "there". But maps and borders also regiment lives, often arbitrarily so, in accordance not with the aspirations of the people but with the whims and cupidity of the powers-that-be.

Become a mini-dictator for five minutes, with Indonesian artist Aditya Novali's LED-lit, interactive map Identifying Southeast Asia: Borderless Humanity. As the audience is invited to play with a switchboard, territories of the region randomly appear and disappear, deleted off the map with a single motion. A red switch even gives you the nuclear option of blacking out the entirety of Southeast Asia. The provocative work further explores the constantly evolving geography and geopolitics of the region, where ethnic minorities' aspirations take form as easily as they are crushed. 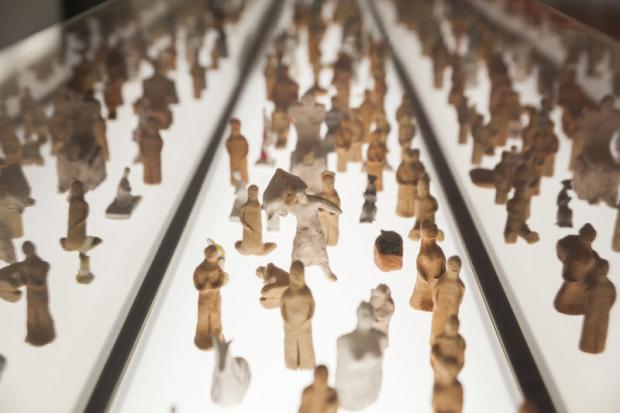 Through the use of mirrors, Shan-exile artist Sawangwongse Yawnghwe multiplies the number of clay figurines representing Rohingya refugees fleeing Myanmar in Spirits Vitrine.

In Filipino artist Ryan Villamael's Locus Amoenus, the map becomes a projection, albeit a pervasive one. The site-specific installation of intricate paper-cut leaves and branches examines how colonial powers have shaped the Philippines since the 16th century, designing its boundaries, governance and trade routes to fit their ambitions. A "pleasant place", Locus Amoenus is the vision created by colonisers as architects.

Even so, borders have never ceased to be porous despite nationalistic impulses to partition territories and populations. Crossing the Thai-Myanmar border in Nipan Oranniwesna's 2401 floor installation has never been easier -- child's play in comparison to the actual conditions migrants must face. In a larger-than-life installation In And Out Of Thin Layers Myanmar artist The Maw Naing uses mosquito nets -- a recurrent image in Southeast Asia, acting almost as a unifying element -- to create porous borders, multiple zones where the audience is encouraged to cross and seek refuge. Spanning the museum's front gallery, The Maw Naing's work fosters perpetual movement. Each mosquito net only constitutes a temporary stop, a short-term sanctuary.

The movements of "exit" -- voluntary, often for economic reasons -- then "exile" -- imposed on individuals for political reasons most of the time -- and finally "exodus" -- a mass departure of people fleeing conflict, war and humanitarian crises -- are clearly defined in Pazzini-Paracciani's curatorial statement. However, "Diaspora" gives the people involved in such movement centre stage.

The fragmented, sometimes conflicted identities of the individuals on both sides of the border are poignantly examined, with many artists reflecting on their personal experiences and the "otherness" that has become an integral part of them.

Other persons' perceptions of the artists become a powerful tool of self-expression in the cases of Anida Yoeu Ali -- a Cambodian-American artist of Muslim faith -- and Abdul Abdullah -- a Malay-Australian artist based in Sydney -- as they turn the tables on their "tormentors", those who verbally abused them or observed with them a leery curiosity due to their cultural background.

Reclaiming the imagery with which they are often assimilated -- a peculiar entity in the case of Ali's Buddhist Bug and a monkey for Abdullah's Coming To Terms series -- they defy viewers' gazes.

"This is what you see when you see me," Abdul Abdullah said, as he was showing the audience a dramatic photograph of himself wearing a monkey's mask and utilising imagery from the London riots and Arab Spring. In his works shown at MAIIAM, the Australian artist literally "comes to terms" with this portrayal of himself, embracing a monkey in a reconciliatory pose. 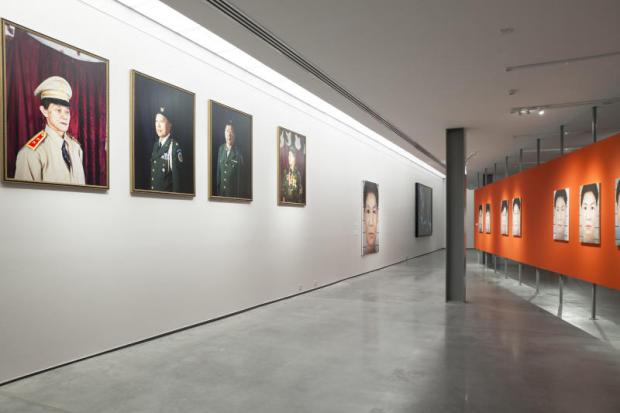 The lives and aspirations of ethnic minorities and migrants are pictured through the textile works of Thai artists Jakkai Siributr and Piyarat Piyapongwiwat, where embroidery serves to tell the stories of displaced Karen, Rohingya and Chin communities while flag-like patchwork assembling of leftover fabrics creates a banner for the exploited, invisible migrant textile workers.

Invisibility is often an issue for minorities in their own land or in a foreign country. Nipan's Signal video work pictures the alternating absence and presence of migrant workers in familiar surroundings -- in this case, literally, the museum space. Lao artist Pao Houa Her, in her Hmong Veterans, Attention series portrays the lack of recognition for Hmong community members who fought alongside American soldiers in the Vietnam War. This touching series of photographs, depicting the Hmong veterans in full military attire and dignified poses, contrasts with the lack of official acknowledgement of their war efforts.

While the exhibition addresses expected themes and topics that have made headlines globally in the past few years -- namely, the Rohingya crisis -- "Diaspora" also delves into the sensitive issue of return, or the impossibility thereof.

Political exiles such as Thai lese majeste convicts are pictured in Paphonsak La-Or's paintings as is a mass exodus of Rohingya refugees, recreated in Sawangwongse Yawnghwe's Spirits Vitrine through clay figurines. For them, there is little hope of regaining their homeland for those fortunate enough to officially be recognised as belonging to a country. But for others, who did regain the land of their fathers, split identities are an unexpected challenge they must face.

In I Svay Sareth Eat Rubber Sandals Cambodian artist Svay Sareth who spent 13 years in a refugee camp during the Khmer Rouge regime, intensely chews on black rubber sandals, which have become symbolic of the oppressive rule in a cringe-inducing video. The same sandals, he found out after his return to Cambodia, are now sold as souvenirs on the streets.

As an exhibition, "Diaspora" draws its strength from the diversity of the artists involved, as all come from different countries and ethnic minorities. However, the show isn't a "United Nations of Southeast Asia panel", as the personal and political views of artists sometimes clash with those of others. On the museum's ground-floor, Shan exile Sawangwongse Yawnghwe's works are close by to those of Thai filmmaker Nontawat Numbenchapol whose portrayal of Shan army recruits serves to illustrate indoctrination of Thai citizens under military rule. The choice of representing these differing sensitivities and affiliations -- and at times, these tensions -- is commendable. 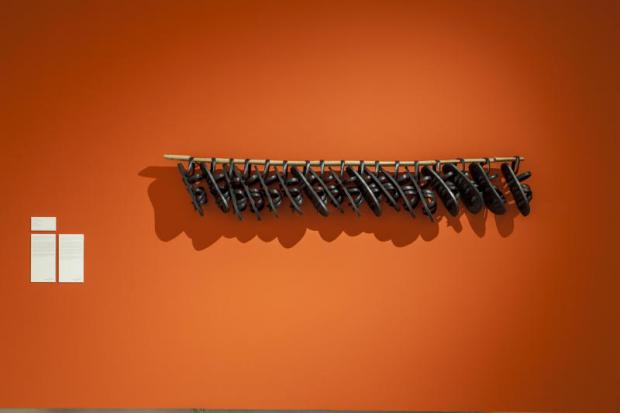 Stake Or Skewer by Svay Sareth: The black rubber sandals have become forever associated with the violent Khmer Rouge regime but are now sold by hawkers.