YANGON: A Myanmar court on Wednesday rejected a motion to drop a case against two Reuters journalists arrested while investigating a massacre of Rohingya Muslims, pushing ahead with a controversial prosecution that has sparked global outrage. 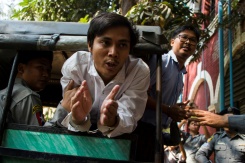 Detained Myanmar journalists Kyaw Soe Oo (C) and Wa Lone (R), who were arrested while investigating an army-led massacre of Rohingya Muslims, talk to the media after a court rejected a motion to drop a case against them

Myanmar has faced global condemnation and accusations of extrajudicial killings, ethnic cleansing and genocide as some 700,000 Rohingya Muslims have fled Rakhine to Bangladesh following a military crackdown on insurgents.

The government rejects the allegations and says it was defending itself against attacks from the Arakan Rohingya Salvation Army, which occurred on Aug 25.

The two reporters have been detained in Rangoon's Insein prison since their arrest while facing hearings to determine whether the case will go to trial, with 17 out of 25 witnesses having given testimony.

Their lawyers asked the court last week to dismiss the case, citing in part troubling discrepancies in witness statements, but the motion was swiftly rejected in a courtroom in the commercial capital Rangoon packed with supporters, family and media.

"The court decided that the proposal from the defendants' lawyer to release the defendants before all the witnesses were cross-examined has been rejected," judge Ye Lwin said.

“Why do soldiers, who are found guilty of murder, get 10 years while we journalists, who exposed the murder, face 14 years in prison?” asked U Wa Lone, one of two Reuters reporters who now face trial for their work. https://t.co/k38NxX3CfZ

The pair had been investigating a massacre of 10 Rohingya men on Sept 2 in the Rakhine village of Inn Din that was carried out by security forces and local villagers.

The military admitted that the atrocity took place and Reuters later published their story while the reporters were in prison.

Seven Myanmar soldiers have been sentenced to jail with hard labour for their part in the killings, according to a Facebook post by the army chief late Tuesday.

Wa Lone referred to the sentencing of the soldiers as he was being directed back into the police van following the hearing.

"Those who killed people in the mass killing were given a sentence of 10 years. We were simply trying to find out the news and report this and we are facing a trial that could result in us going to prison for 14 years," he said.

One of his lawyers Than Zaw Aung also compared the cases.

"My question is why are the journalists still in detention in prison if their report is true?"

The case against the journalists has proceeded despite international calls for their release. Last month Reuters announced that prominent rights attorney Amal Clooney had joined the legal team.

Family members of both Wa Lone and Kyaw Soe Oo were in tears after the decision.

But Wa Lone, who turned 32 on Wednesday and was brought cake by his friends, still expressed optimism.

"I believe in democracy. I also believe that one day we will be released because of freedom of expression," he said.