Reporters surround police captain Moe Yan Naing outside the courtroom where he testified in the trial of detained Reuters journalists Wa Lone and Kyaw Soe Oo in Yangon on Friday. (Reuters Photo)

YANGON: Myanmar police on Saturday evicted the family of a police officer who testified that he had been ordered to entrap two reporters now facing charges that could get them up to 14 years in prison.

Reuters journalists Wa Lone and Kyaw Soe Oo have been detained since Dec 12 on charges of violating the colonial-era Official Secrets Act. They were investigating a massacre of Rohingya Muslim men in Rakhine state, for which seven soldiers have already been convicted and sentenced to jail.

Police Capt Moe Yan Naing told a court hearing on Friday that his superior had arranged for two policemen to meet the reporters at a restaurant and hand over documents described as "important secret papers" in order to entrap them.

On Saturday, Moe Yan Naing's wife, Daw Tuu, said she and her daughter were ordered to move out of their police housing in the capital, Nay Pyi Taw.

"A police officer called us this morning and said we have to move out of the housing immediately and that's the order from the superior," Daw Tuu said, sobbing.

Moe Yan Naing said he and other colleagues who had been interviewed earlier by Wa Lone about their activities in Rakhine had been interrogated under the direction of Brig Gen Tin Ko Ko of the 8th Security Police Battalion.

"This is an outrageous move," said Robert Sann Aung, a human rights lawyer. "This is to give an example to other police in the country to keep silent from telling the truth."

The court in Yangon has been holding hearings since January. The defendants' lawyers have asked the court to drop the case against the pair, saying prosecutors failed to present enough evidence to support the case, but the judge denied the motion. 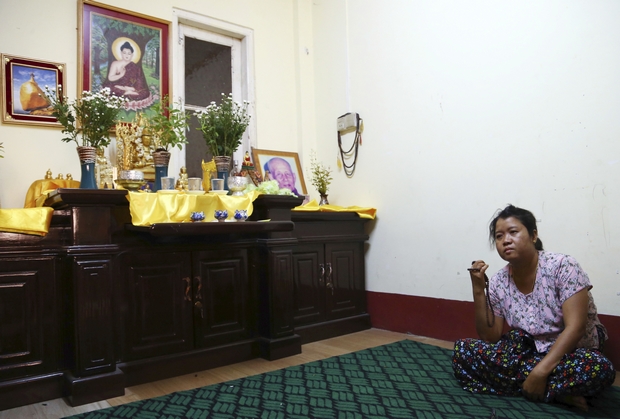 Daw Tuu, the wife of police Capt Moe Yan Naing, talks to reporters at the home of her brother-in-law, after her family was evicted from their police housing in Nay Pyi Taw on Saturday. (AP Photo)

Thailand recorded 7 new imported coronavirus cases on Monday, all Thai nationals returning from overseas, taking the total number of infections to 3,743. No new deaths were reported.