What the populists are proposing for Italy
World

What the populists are proposing for Italy 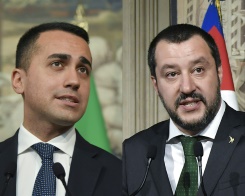 Here are some of the proposals from the "government of change":

Italy is battling a public debt of 2.3 trillion euros ($2.7 trillion), 132 percent of gross domestic product (GDP) -- the second highest ratio in the EU behind Greece.

The M5S-League coalition promises to stimulate the economy through more spending.

"The government's actions will target a programme of public debt reduction not through revenue based on taxes and austerity, policies that have not achieved their goal, but rather through increased GDP by the revival of internal demand," the document says.

The eurosceptic coalition promises a series of measures to reign in the EU inclduing renegotiation of EU treaties and a review of the bloc's economic governance on issues such as the single currency.

The League has inserted its flat tax policy into the programme, adding a 20 percent rate to the 15 percent proposed before the election.

Also included is Five Star's flagship basic income plan, which sees 780 euros a month paid to those with no revenue, while those earning less than the basic will see their income topped up. It will be revoked from anyone who refuses three job offers within two years.

The parties pledge to stop "the business" of migration, cracking down on smuggling networks and cooperatives that manage asylum centres. They also want to speed up expulsions of illegal immigrants.

They demand Italy have "a decisive role" in European negotiations on migration and want to accelerate the examination of asylum applications and systematic repatriation of rejected applicants, who can be held up to 18 months in detention centres.

Also mooted are a registry of imams, immediate closure of unauthorised mosques and the inclusion of "community involvement" into a new law on the building of mosques.

A gradual roll back of a retirement that is due to reach 67 in 2019, instead enabling retirement when the sum of a person's age and years of social security contributions reach 100.

In the name of self-defence individuals would be allowed to shoot anyone who enters their home, even in the absence of a clear physical threat.

New prisons would be constructed, "as many foreign prisoners as possible" sent to serve sentences in their home country and large numbers of police officers -- all equipped with a video camera -- and carabinieri military police recruited.

The "contract" underlines Italy's place in the Atlantic alliance "with the United States as a privileged partner", but asks for the immediate removal of sanctions against Russia "which should not be perceived as a threat but as an economic and commercial partner".

Among the more drastic proposals is slashing the number of parliamentarians to 400 MPs (from 630) and 200 senators (from 318). All would be banned from changing political parties during the legislature.

They also want to beef up the use of popular referenda in law-making and grant more power to the regions.

A "severe and incisive anti-corruption law" is planned to recover resources and boost competitiveness.

The parties propose increased penalties, life-time banishment from public office and the introduction of "agents provocateurs" to test the honesty of officials.

Setting up an unspecified legal minimum wage, blocking the sale of the Alitalia airline and completely re-negotiating the controversial Turin-Lyon high-speed railway.

Increase savings protection and the accountability of both the management and supervisory authorities of banks.

The development of the "green-economy" and use of electric cars is also a priority.

The document proposes that no-one convicted of corruption, being investigated for serious crimes or Freemasons can become ministers, Conflict of interest criteria for parliamentarians will be beefed up.

Italy's commitments to international military missions would be reassessed.

To shore up Italy's collapsing birthrate, the state would offer free nursery schooling for Italian children and not apply VAT on early childhood products.

All illegal Roma camps to be closed and Roma children who don't attend school removed from their families.

More stringent regulations on the gambling industry, including a complete ban on advertising and sponsorship.

MCOT 'not insolvent' as cash shrinks

State-owned broadcaster MCOT is going through a liquidity crunch but is not insolvent, says a source at the Finance Ministry who requested anonymity.