A volcanologist's take on Fuego eruption

PARIS - The eruption of the Fuego volcano in Guatemala was likely a "pyroclastic surge" similar to the one that destroyed the ancient city of Pompeii, says volcanologist David Rothery of The Open University in England. 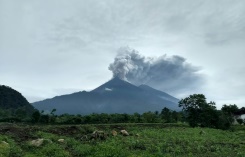 The word pyroclastic is derived from the ancient Greek for "fire" and "fragments".

Rothery analysed for AFP the latest eruption which has killed at least 25 people:

Q: What type of an eruption was this?

A: "The cause of most deaths at the current eruption of Fuego (Guatemala) is being widely reported as a 'river of lava'. This is probably an inexpert description or a mistranslation. Fuego does not characteristically produce long fluid lava flows like those currently erupting from Kilauea (Hawaii). They are unlikely to reach inhabited areas, and are not the main hazard at this volcano.

"The videos and still images that I've seen suggest instead one or more pyroclastic flows. This is when a violently erupted mass of rock fragments and hot gas finds itself too dense to rise as an ash column, and instead cascades down the volcano's slopes.

"Pyroclastic flows (or surges) can move at over 100 kilometres (62 miles) per hour, and may be hot enough to glow like molten lava. They can travel further, as well as much faster, than lava flows. This is the phenomenon that claimed many lives during the famous AD 79 eruption of Vesuvius that destroyed Pompeii."

A: "No particular reason. There is no link to any recent earthquakes or to the eruption in Hawaii. It takes a LONG time for magma to accumulate at depth and rise toward the surface before it can erupt. The volcano 'plumbing' system below Fuego feels no influence whatsoever from events in Hawaii."

Q: Why was this eruption not predicted?

"Given the activity... it might have been wise to declare an evacuation zone around the volcano."

A: "The Guatemalan volcano monitoring authority (Insivumeh) is now reporting the eruption as over, although lahars remain a hazard when rain falls on newly-deposited ash. .. When rain falls on new ash it can turn into a dense slurry (like wet concrete) and devastate alleys (bridges can be destroyed.