Final results already are printed, but the five-nation, three-rivers 'Acmecs' summit will take up two days in Bangkok on Friday and Saturday.

The 8th Acmecs summit and related meetings will be held in Bangkok Friday and Saturday. The group is a cooperative framework of Cambodia, Laos, Myanmar, Thailand and Vietnam, using member countries' diverse strengths to promote balanced development in the sub-region. Thailand initiated the framework in April 2003. Areas of cooperation include transport, trade and investment.

Mr Somkid said although the five members, known as CLMVT, are not a big group with a population of around 200 million, their cooperation would usher in a substantial market, and this is why the meeting is crucially important.

The group's economy has grown 7-8% on a yearly average over the past decade, which is remarkable, he said, adding the rate is known to be the strongest compared with other regions in Asia. "The region's long-lasting substantial economic growth results from an abundant workforce with low wages, which helps draw in foreign investors," said Mr Somkid. "The connectivity under Acmecs would give a vast boost to the region's potential."

Few people other than investors may know about Asean, but the heart of Asean now lies in the upper part of the region, or the CLMVT, the deputy premier in charge of economic affairs said.

On Friday, the first master development plan for Acmecs will be submitted to leaders of the group at the 8th Acmecs Summit, aiming to strengthen sustainable economic growth for members. 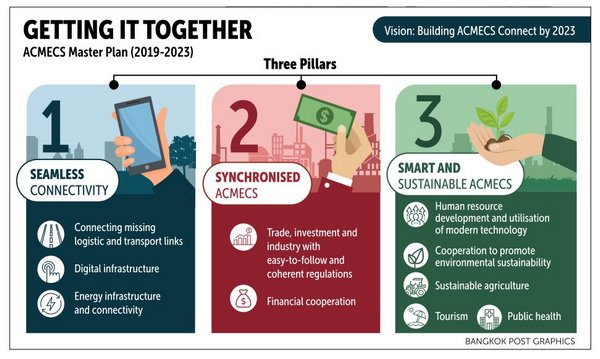 The five-year master plan (2019-23) aims for greater collaboration among member countries, making the bloc more powerful and efficient in managing the effects of global swings in economic growth, Mr Somkid said. Mr Somkid said the action plan will be conducted quickly with an eye towards implementing the master plan in 2019. "The upcoming meeting is crucial for the region, although the scale of each country is not large," he said. "But if the 200 million people represented by the member countries are combined and economic cooperation is closely tied in, Acmecs will become very powerful in trade, investment and tourism."

The master plan, Mr Somkid said, will lay out collective development guidelines among the members, which would help ward off duplication of work since several countries out of the region are also keen to tap into development projects through other cooperative frameworks.

For example, Japan wants to play a part in supporting projects under the Greater Mekong Subregion (GMS) scheme, which covers Laos, Cambodia, Vietnam, Thailand and China (especially Yunnan province and Guangxi Zhuang Autonomous region). China, on the other hand, is keen on the Lancang-Mekong Cooperation scheme. Meanwhile, the United States, European Union, and Australia are also interested in carrying out development projects with the region.

The master plan also paves the way for international financial institutions to consider the plans by which they can provide financial assistance to the region. These institutions include the Asian Infrastructure Investment Bank (AIIB), Asian Development Bank (ADB) and Japan Bank for International Cooperation (JBIC).

"They can step in to assist in with various aspects of the master plan, which would help reduce duplication and ensure maximum efficiency in regional development," said Mr Somkid. The Foreign Ministry would also set up a fund for regional development and this mechanism would allow financial institutions to engage with the planned strategies.

The fund will be supervised by the Neighbouring Countries Economic Development Cooperation Agency (Neda), which would serve as a point of contact with various financial institutions for regional development, he said. Neda was set up in 2005 with the aim of helping countries in the region with trade, investment, transport networks, tourism and human resource development.

During 2018-21, Neda plans to provide financial assistance to projects including improvement of a power grid worth 1.78 billion baht for the North Okkalapa and North Dagon districts of Yangon; Road No.67, stretching from Anlong Veng to Siem Reap; the development of Road No.11 for a section spanning Khok Khaodor-Ban Nam Sang, worth 6.3 billion baht; and construction of the fifth Thai-Lao friendship bridge. Neda has provided financial assistance to Laos, Cambodia, Myanmar, Vietnam, Bhutan, Sri Lanka and East Timor.

Mr Somkid said Neda will function more like a coordinator for international funding organisations such as the AIIB, ADB, Japan International Cooperation Agency and the World Bank.

"Many countries are involved in the sub-region's development," he said. "There are several cooperation frameworks, including the Greater Mekong Subregion, which is supported by Japan; and the Lancang-Mekong Cooperation scheme, initiated by China in 2014, covering connectivity, production capacity, cross-border economic cooperation, water resource management, agriculture and poverty reduction, while the US, Australia and EU have also been trying to get involved in regional development. "Involvement by many organisations in Acmecs has led to duplication of investment projects, and the master plan will cut redundancy and bring more efficiency to international funding programmes in the region."

The group will also hold a CEO forum, a venue that should bring business people in the five countries together. Regarding boosts to trade, the Commerce Ministry will organise activities to support the group's strategic partnership cooperation for overseas market development and regional economic boosters.

The first activity is to foster links between Thai local products and the CLMV and global markets, he said, adding ways will also be found to connect local suppliers in border provinces with other potential producers in neighbouring countries, such as cooperatives and those in commercial districts, so they would work together in production and trade.

A second type of activity concerns attempts to create trade and service connectivity among potential players in the CLMV countries. They could work together on an e-commerce platform to expand trade.

Another activity will be the organisation of the third CLMVT forum under the chairmanship of Cambodia. The participants would follow up on various cooperation projects in the region, such as efforts to address border trade problems, development of the economic and trade database, enhancing human resources, support for startup companies, and tourism.

Mr Somkid said the master plan would potentially help attract international companies to set up offices here as a base to enter one or multiple CLMV markets.